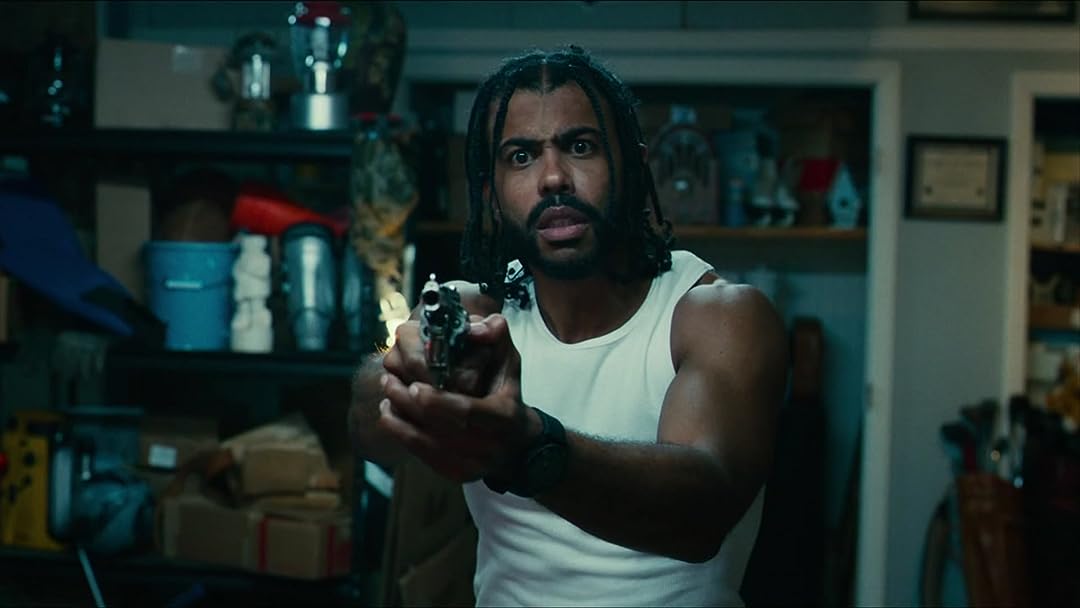 (4,694)7.41 h 35 min2018X-Ray18+
Two childhood friends struggling to survive in a gentrifying Oakland are forced to redefine their friendship when one is placed on probation after spending time in the county jail.

joel wingReviewed in the United States on May 30, 2020
5.0 out of 5 stars
Best movie of 2018 powerful and funny at same time A love story to Oakland
Verified purchase
Blindspotting is a love story to the city of Oakland, California, for what it is and what is disappearing due to gentrification. It was written by the two stars of the movie Daveed Diggs as Colin and Rafel Casal as Miles.

The message of the old and new Oakland is shown as soon as the credits start. You have the corner stores and the new Whole Foods Market. You’ve got the black people and the new white people. You have the homeless camps while new apartments are being built across the city. Then Colin and Miles eat food at the new Kwik Qay. That used to be a neighborhood burger joint in the hood, but now it has become a gourmet restaurant with vegan burgers and umami ketchup.

The story focuses upon Diggs who just got out of prison and has two days left on parole and his life long friend Miles. They work as movers, and they come across all kinds of examples of how the Oakland they grew up in is disappearing as middle and upper class whites move into the city and transform it. Kwik Way was just one example. Another is when they empty out an old house in West Oakland that used to be owned by a black family. These are the type of people that are being forced out of Oakland because of the rising costs, and their home will be refurbished and sold to a middle to upper class family just moving to the city.

There are other messages as well. Colin’s parole for example shows how the lives of felons are so limited that it is almost impossible not to have a violation and be sent right back to jail. For example, he’s given a job to move a house outside of Alameda county. Luckily Colin catches that otherwise he would have violated his parole. In another scene his mom asks him why he can’t find an apartment and he says as a convicted felon that’s impossible. Instead he lives in a halfway house with a curfew which he is always on the verge of breaking. Again, if he did that would be a violation and he would be sent back to prison.

Police violence is also covered as Colin witnesses the police shooting an unarmed black man that was running from the authorities. That death haunts Colin as his daily routine is disturbed with the images of the murdered man and all the other black men that have been killed by cops. Miles’ young son also gets trained on how to deal with the police so that he doesn’t get shot.

Blindspotting was by far the best movie of 2018. It was hilarious. It was touching. It had poignant social and political issues. It was just amazing and everyone should see it.
C

Andy WaitstillReviewed in the United States on January 5, 2019
5.0 out of 5 stars
What Happens When the Pink Cloud Vanishes
Verified purchase
An odd film, at first, and then one that gets you thinking. I had not seen a synopsis for the film and, for a while, it seemed like a good laugh at the b.s. of gentrification. Collin (Daveen Diggs) is on the last days of his probation for an assault. His friend, Miles (Rafael Casal), works with him as a mover in Oakland, a ne'er-do-well. Collin is Black, Miles, White, but this doesn't seem to affect their childhood friendship at all. But Collin is an eyewitness to the shooting of a Black man by a police officer and it jars him to the core. The film moves rather awkwardly, at first, to the dramatic but starts hitting on point after point - without being preachy - and leaves the viewer with an excellent sense of what its title means. The acting, across the board, is excellent. The writing has a few gaps here and there but still does a great job of turning the audience 180 degrees. And the direction is sharp and virtually seamless. An important picture at any time, it certainly feels urgent now.
11 people found this helpful

P. A. BergReviewed in the United States on December 22, 2018
2.0 out of 5 stars
Surprisingly big let down
Verified purchase
I was really disappointed in this movie after reading a few of the reviews. "Powerful" and "Brilliant" and "Best movie I've ever seen" were among the praises for this movie. And I just don't get it. What am I missing? I was ready for the next Boyz n the Hood and man this movie just wasn't there. Not even close.

My main problem was the forced, cliched way the movie played out the various racial themes. There was no originality, nothing new here. The scenes were about as thought provoking as the memes I see on my Facebook feed. And throw in a dose of unbelievability for good measure (like when Collin (Daveed Diggs) hardcore raps his way through what was supposed to be a super emotional and tense scene with a cop - god that was awkward and just kinda dumb).

Add in that the plot really doesn't ever develop into anything. I know that this is supposed to be like a day-in-the-life type of movie, but still, there's really just nothing to keep you going and wanting to finish.
10 people found this helpful

CaliSDReviewed in the United States on December 20, 2018
5.0 out of 5 stars
An Opportunity for Dialog...
Verified purchase
I was initially skeptical about watching this film because I'm tired of watching films based on the Bay with all kinds of violence, sex and profanity. Yes - that's real life in some cases but, like comedy, the message is lost when all one hears is cursing - unnecessary noise. There needs to be balance so that the point is not lost.

The two main characters are agents for what some folks are currently experiencing in the Bay Area - as well as other places that are being gentrified.

Main actors: two men, pretty rough, afraid and broken. One outwardly raging and hustling and the other trying to stay clear of trouble on his last days of probation.

There's some deep reflection on how they see each other and how other's see them on the outside as well - exposing the characters to their own imposed destructive language and narratives.

I really appreciate the humor, thrown in with symbolism, very real and beautiful lyrical interludes, amongst the breakage of stereotypes and assumptions.

There is great opportunity for growth, no matter what side of the coin you're on. Whether you agree with the film's messages or not, I think it deserves props. There are SO many things this film touches on that the conversation could go on for days.
9 people found this helpful

InsultinSultanReviewed in the United States on October 10, 2019
2.0 out of 5 stars
Okay for an indie, but weak overall.
Verified purchase
This was highly recommended by a couple of people and has fantastic customer reviews. On the one hand, it's not bad for an indie movie, but, overall, it was kind of weak. It's one of those movies that starts out trying to be funny and ends on a serious note. In great cinema, it works, but for me, it wasn't that funny and I was more irritated with the ending than moved. It may have accidentally been a good undercurrent for the film, though. In real life, street life is cool and funny until something serious happens and the audience is suppose to cry. Maybe if the characters in this story had the sense to take life seriously from the beginning, the bad things wouldn't have happened. It didn't seem like the filmmakers were going for that subtext, and if they were, they didn't make the point strongly enough . They tried to make the police shooting look shocking and horrifying, but the thugs had no problem beating people senseless or to death making them just as bad as the cops, or worse, because they were so self-righteous. At least the police were trying to suppress crime, while they were contributing to it or making light of it. Those characters needed to take a longer look at themselves before blaming anyone else for what happens. I would rather have rented this, but unfortunately, the only option was to buy. Maybe someday, I'll watch it again. Then again, I'm always happy to support indie filmmakers even if I'm not crazy about the material.
2 people found this helpful

GovnehReviewed in the United States on May 17, 2019
5.0 out of 5 stars
This Movie Exceeded All Expectations
Verified purchase
I had high hopes for Blindspotting. As a fan of both Diggs and Casal, it was agonizing that this didn't release anywhere near me, but I rented it the moment I was able.
Hope is a hard thing when it comes to movies. It tends to set expectations, and so often a movie can't meet them.
Not so with this one. It was everything I hoped for and so much more. I still just find myself thinking about it, months after the fact. And it ran the spectrum of emotion, that's the truth. I laughed throughout but there were moments of heart-stopping terror, and disappointment, heartbreak.
Diggs and Casal perfectly captured the intrusion of gentrification into Oakland, portrayed the weight of a flawed justice system, and made me feel the terror of a systemically racist policing force. And then laugh all around it, too.
Blindspotting deserves all the love it's getting and isn't getting nearly as much as it's due. This is one I want a hard copy of on my shelf so I can watch it whenever I want. Definitely, definitely, watch this movie.
3 people found this helpful

Jane AustenReviewed in the United States on June 23, 2021
5.0 out of 5 stars
Well done dramatic film with some well timed laughs
Verified purchase
I see "Blindspotting", "Sorry to Bother You," and "Last Black Man in San Francisco" as a trilogy of life for black men in the Bay Area-- it can be dangerous and extremely challenging but it is also full of friendship, beauty, and love.

I loved each of them for so many reasons and highly recommend watching them more than once. Our next watch will be "Blindspotting" made for TV and focusing on the Ashley character played by the amazing Jasmine Cephas Jones.
One person found this helpful

CarlyDremeReviewed in the United States on November 7, 2018
5.0 out of 5 stars
Phenomenal, Creative, and Critical
Verified purchase
Honestly one of the best films I've ever seen and currently my personal favorite; front to back, it feels like a labor of love that manages to honor all of its characters with compassion and blunt reality, including the city of Oakland itself; phenomenal direction, sound, writing and acting all the way through
11 people found this helpful
See all reviews
Back to top
Get to Know Us
Make Money with Us
Amazon Payment Products
Let Us Help You
EnglishChoose a language for shopping. United StatesChoose a country/region for shopping.
© 1996-2021, Amazon.com, Inc. or its affiliates