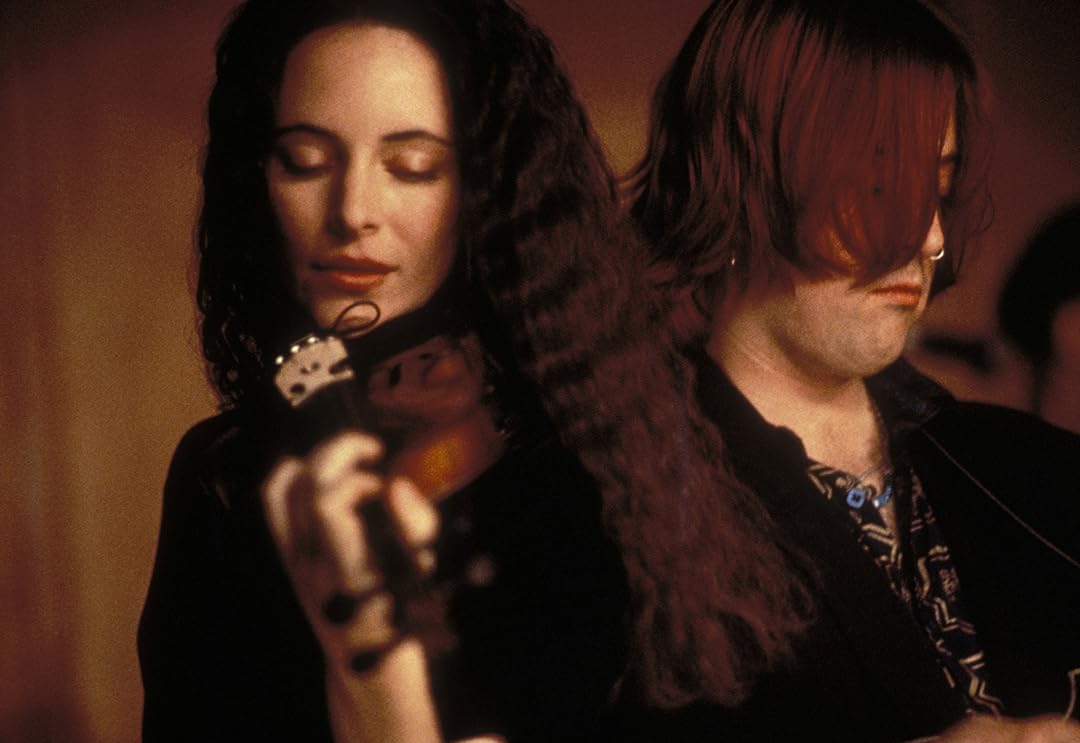 Elizabeth PyattReviewed in the United States on April 24, 2015
5.0 out of 5 stars
Gritty Romantic Thriller
Verified purchase
The story is very basic (woman with uncertain vision is chased by maniacal killer), but the characterization of the leading lady Emma (Madeleine Stowe), the hardened detective Hailstrom (Aidan Quinn) and her best friend (Laurie Metcalfe) is exceptionally quirky and fun. Emma is no fragile thriller victim, The romance is also very hot, but also a little rocky as two strong personalities collide. Emma (Stowe) is a blind, but very independent and fiesty, Irish musician in Chicago who lost her sight when her mother cracked her head on a mirror. The thriller begins when she regains her sight but needs time to relearn how to see. In this fuzzy period, she witnesses a murder, but doesn't realize it until she processes it later. Det Hailstrom is called in and soon the hunt and romance begin. We know that Det Hailstrom (Quinn) is attracted to her because he drunkenly strips down to his undies in a bar to get her attention (FAIL). Fortunately, he proves to be a better detective. This is a great movie because it gave Stowe and Quinn both a chance to move beyond their pretty-face roles and show their strength. If you like Stowe in Revenge or Quinn in Elementary, I really recommend this movie. Or just get it to enjoy the romance on a cold winter night.
7 people found this helpful

Janice HarrisonReviewed in the United States on July 13, 2009
5.0 out of 5 stars
OUTSTANDING ROMANTIC SUSPENSE WITH DEEPER LESSON
Verified purchase
I recently purchased "Blink" from Amazon.com after seeing a trailer for it on [...]. In this movie, Madeleine Stowe, who is a very gifted actress, plays Emma Brody, a blind woman and talented violinist in an Irish folk band who has just undergone a corneal transplant to restore her sight, after she was blinded at age 8, when her horribly abusive mother smashed her face into a mirror. The brilliant opthalmologist who does the transplant surgery is obviously in love with her and has been for some time; it would have been nicer if this relationship could have been explored more fully, as another reviewer wrote.

Emma witnesses a murder but because her vision is still not very clear, she does not make a credible witness when she goes to the police. The detective assigned to the case is John Hallstrom, who is played by Aidan Quinn. It's obvious he and Stowe get along in real life, as they have great chemistry and have starred in other movies together. The scene where Quinn and Stowe are in the coffee shop, talking, and the way he looks at her, is very powerful. Despite his attraction, he is trying to remain professionally detached, but when he sees her having dinner with her doctor, his control breaks and he finally gives in to the attraction. The ending scene, in which he's standing and waiting for her, while bringing her dog back to her, and he tells her how he really feels (using lyrics she dared him to write), is outstanding.

I also think there is a deeper lesson in this movie: never take the gift of sight for granted, as it is precious. As someone who had LASIK vision correction surgery about five years ago (I could hardly see the big "E" on the eye chart before), I could really relate on a personal level to Emma Brody's coming to terms with finally being able to see. Of course, having a corneal transplant is much more serious than LASIK surgery, but nonetheless, I found the scene where the doctor removes the bandage from her eye, and she's touching his face and crying, very moving. The first time I realized I could read the clock across the room without glasses, after 30 years, I started crying too.

Romantic FoolReviewed in the United States on July 27, 2012
4.0 out of 5 stars
blink
Verified purchase
I accidently came upon this movie on TV one night but didn't get to see all of it. I looked in the programing and couldn't find it listed for another time and decided I would order it. I really like the actor, Aiden Quinn, in this movie. He has that suave, nonchalant way about him and he carries it to the screen. Being handsome doesn't hurt him either. I also like Madelaine Stowe in this movie. She plays the part well and I like the way her distorted views are portrayed. The story line is good and kind of suspenseful but not gross as some of the movies these days. I appreciate the older movies for that reason. Besides, my daughters are always looking for movies to watch so I decided to order this one because I thought they might also enjoy it. And of course when I see a movie and like it well enough to see again I like to order so I can watch in my leisure and more than once.
4 people found this helpful
Amazon customerReviewed in the United States on August 25, 2001
4.0 out of 5 stars
Thrilling and Chilling Original Plot Line
Verified purchase
Since first teamed up as boyfriend and girlfriend in the 1985 Richard Dreyfuss/Emilio Estevez comedy 'Stakeout', Madeline Stowe and Aidan Quinn make a huge comeback together in 'Blink'. Madeline Stowe is a young woman in her twenties who undergoes an operation that lets her regain partial vision after being tramatically blinded as a child. While still making the drastic adjustment to a new world, she unfortunately becomes the only witness to a murder. Handsome and cool Chicago police detective John Halstrome's (Aidan Quinn) attraction forces him to defend this witness to his doubting collegues as being credible. He subsequently winds up juggling a steamy affair with Stowe, and decifering true or false whatever she actually sees...and what are mere dellusions brought on by fear and the recent surgery. Two strong-willed and attractive stars make for a very good romantic scenerio, neither could've done better than Stowe and Quinn. The movie I think is a great for Chicagoians, staying true to the city and its make-up especially with it's native star Quinn and his awesome windy city accent. As for the plot, its a thrilling and interesting crime as it begins to unfold, adding touches of fear with scenes of the killer...seen mostly through Stowe's blurry eyes. You really need to see the movie unedited to get the full thrust, which is why I bought it a while ago. You really couldn't see a movie with these two without being able to watch their passionate love sequences, and I always thought watching a really good murder mystery that had frequent commercials was like making love with coffee breaks every ten minuets. Take a look at this great, new-classic thriller with plenty of comedic touches and you wont regret it.
9 people found this helpful

Mark in Santa MonicaReviewed in the United States on January 7, 2020
5.0 out of 5 stars
fabulous performances
Verified purchase
This is an unexpectedly well-thought out thriller. Its portrayal of brain recovery from retinal surgery was smart, and it was used to great effect to move the action. Madeline Stowe is just gorgeous and a fine actress.

Moonlight4EvrReviewed in the United States on November 23, 2020
5.0 out of 5 stars
Can’t Miss Movie
Verified purchase
Love this movie. Wish the soundtrack was available for purchase on ITunes. I can’t get the one song by The Drovers.

TateziReviewed in the United States on September 4, 2015
5.0 out of 5 stars
Good plot, plenty of suspense and surprise ending
Verified purchase
This ranks in my all time favorite moves so when I saw it at this low price, I had to buy it. Madeleine Stowe and Aidan Quinn are great together, each complementing the other. Good plot, plenty of suspense and surprise ending. I'm by no means a movie critic, but it's a movie I've watched over again over the years and still enjoy it.
One person found this helpful
See all reviews
Back to top
Get to Know Us
Make Money with Us
Amazon Payment Products
Let Us Help You
EnglishChoose a language for shopping. United StatesChoose a country/region for shopping.
© 1996-2021, Amazon.com, Inc. or its affiliates