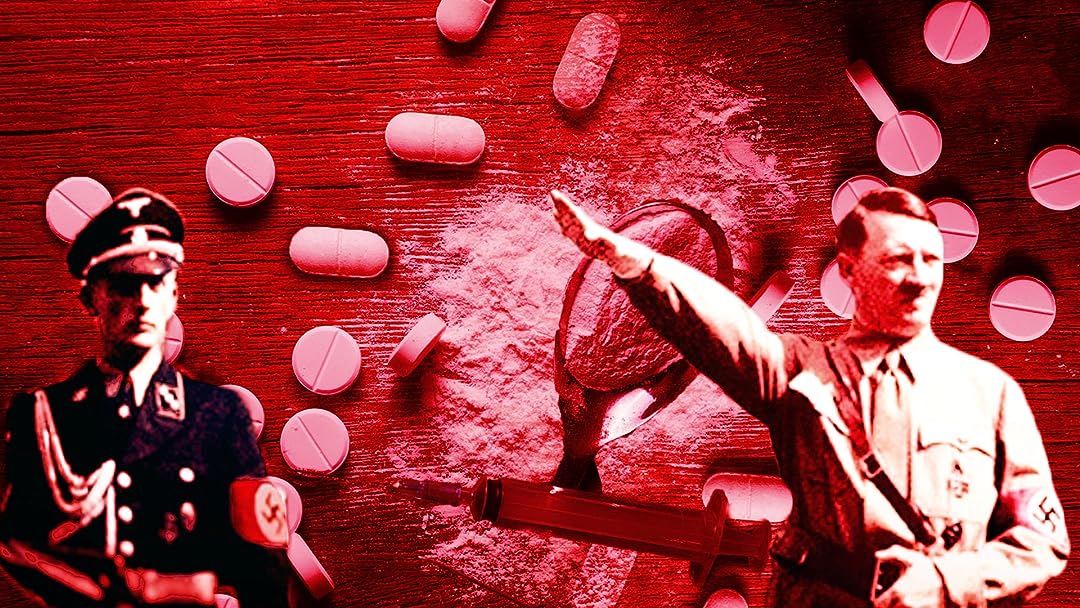 (35)
58min201813+
In 1938 a drug called Pervitin was created in Nazi Germany. This drug was distributed to German soldiers during the course of WW2 and Hitler was no exception to these drug highs receiving drug cocktails from his personal physical Theodor Morell. This film explores the use of drugs in WW2 and looks at the potential effects that drugs could have had on Hitler, soldiers and the war itself.

artgirl123Reviewed in the United States on April 19, 2021
5.0 out of 5 stars
Top Notch Documentary
Verified purchase
This is a phenomenal documentary. I'd put off watching it, because I thought it would be cheesy, over the top, sensationalism. It's not. "Blitzed: Nazis On Drugs" is a thoughtful, professional, well done documentary. It covers not only Hitler's well known drug use, but also the pharmaceutical enhancement of the entire German military and, to some extent the general population. It's quite astounding, but, in the context of what the Nazis were doing at the time, everything starts to make a whole lot of sense.
The show explains the origin of the drugs used (and the permissiveness in 1920's Berlin), either previously well known substances or ones created in laboratories. It also discusses how the drugs were administered, and for what purposes. The effects of this kind of drug use, especially by members of the military, are also examined; including not just physical effects, but also emotional/moral effects.
Anyone interested in World War II will most likely enjoy this documentary. It adds one more level of understanding to the study of that particular conflagration.

ChrisSherrillReviewed in the United States on May 22, 2021
5.0 out of 5 stars
Informative
Verified purchase
The documentary is well done with several experts who, to a man, were easy to listen to. And they had tons of facts to back up their assertions.
I had heard before of Hitler's drug addiction, but I did not know the degree of his dependency. And it was mostly new to me to hear about the level of drugs administered, and apparently taken quite willingly, by members of the Nazi army, navy and air force. I do remember hearing, way back when I was in the military, that our troops had been given drugs as well. I did not believe it, but it seems that I was wrong not to.
3 people found this helpful

bdwoolmanReviewed in the United States on June 9, 2019
5.0 out of 5 stars
The incredible story of how Pervitin (Methedrine HCL) is abused by Nazi troops and Hitler.
Verified purchase
A balanced and fascinating documentary on the use of performance enhancing drugs in wartime by leadership and warfighters on both sides. The emphasis though is on the German Third Reich's use of stimulants by shock troops as well as by the high command. The story also focuses on Hitler and his quack personal physician Theo Morrel whose opioid and meth cocktails amplified Hitler's mental pathologies and which predictably ultimately destroyed his physical health. IMHO the commentary was thoughtful and informed. Great WWII footage that I had not seen before.
6 people found this helpful

John WernerReviewed in the United States on April 4, 2021
5.0 out of 5 stars
Fear & Fatigue...Let's See What We Can Do About It
Verified purchase
his doc is well done. I think it takes a subject that some might even think boring and enlightens to the point where it fascinates. Net gains from drugs came at a great cost in clarity and overall health. I think one talking head summed it up succinctly and accurately when he said Pervitin blurs the line between the actual world (i.e. reality) and the dream state (i.e.paranoid delusional fantasical) when abused over time. What the Nazi's were looking for, besides a super soldier stamina-wise, was to override the conscience and religious based qualms of killing. No wonder they followed it off the cliff as they did so many things.
2 people found this helpful

Reading is FundamentalReviewed in the United States on April 25, 2021
3.0 out of 5 stars
Good luck reading the text on the screen
Verified purchase
Great documentary but I am deducting TWO STARS for the horrible decision to use a small red font against a black screen for text. So irritating!
4 people found this helpful

Zuzu07103#4Reviewed in the United States on September 1, 2021
5.0 out of 5 stars
Fascinating,not emotional 55 min!
Verified purchase
It makes you wonder about theUk,US culpability in the Nazis rise to power.. Luv WW2 docs..usually emotional, shocking etc... I've said I'm "blitzed" @ college parties. (99-02ish) Idk where I picked up the expression.I didn't know the treaty of Versailles banned Germany from making the world's best legit drugs(the bulk of their economy). Of course, they had to pay for the damage of WW1.
2 people found this helpful

Linda LeeReviewed in the United States on April 6, 2021
5.0 out of 5 stars
Very informative
Verified purchase
I knew Hitler was a drug addict. Finding out the Nazis had all their soldiers and pilots on drugs came as a surprise. But it cleared up and answered some of my questions.
2 people found this helpful

Marcus CampbellReviewed in the United States on July 28, 2021
4.0 out of 5 stars
The drug companies won. lol
Verified purchase
It was fairly well done with some reservations. While I understand what they are doing with the red writing, it was difficult to read although it was informative. Everything else really good I thought. They covered all the relevant topics including the use of Jewish slavery. They could have covered that topic a a little more in depth however, but overall It was very interesting and I'm satisfied.
2 people found this helpful
See all reviews
Back to top
Get to Know Us
Make Money with Us
Amazon Payment Products
Let Us Help You
EnglishChoose a language for shopping. United StatesChoose a country/region for shopping.
© 1996-2021, Amazon.com, Inc. or its affiliates