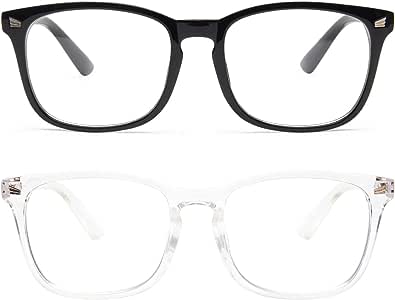 What You Get From LIVHO?

√ Clear lens -- The lens was made of a fully transparent base, without adding any pigment, while maintaining high light transmittance. Less reflective,no affect reading, and almost no color difference.

We can see that one part of the testing area directly beamed by blue light has turned blue, and the other part shaded by Livho Glasses has not turn blue.

Thus we can see, Livho blue light filter glasses can block most of the harmful blue light and protect your eyes.

We can see that one part of the testing area directly beamed by blue light has turned blue, and the other part shaded by Livho Glasses has not turn blue.

Thus we can see, Livho blue light filter glasses can block most of the harmful blue light and protect your eyes.

Have a trouble with sleeping? Suffering sore eyes and headaches from long screen time? It is because exposure to harmful blue rays from phones, tablets, computers, TVs and modern room lighting ruins your sleep and causes your eyes' damage. SOLUTION:LIVHO Anti-Blue Rays Computer Glasses’ Features:
★ UV400 Protection Lens: offers a maximum protection with our multi-layer coating designed specifically to reduce glare, reflect blue rays away from the user and relieve long term eye strain caused by excess electronic device use
★Function of Anti-Blue Rays: at least 90 minutes’ wearing of LIVHO Anti-Blue Rays Glasses before bedtime leaves you free to watch TV and use devices without ruining your sleep
★Durable and Bendable Lightweight Frame
★Scratch Resistant Lens


Product Maintenance:
1. Clean the Lens by Water or Alcohol prep pad and then Wipe Them by the Soft Cleaning Cloth Included Regularly. Do Not Use Other Chemicals to Clean the Lens, to Avoid Surface Broken.
2. Do Not Maintain the Sunglasses in Such Bad Environment of High Temperature or Long Time Damp, to Avoid Deformation.

4.2 out of 5 stars
4.2 out of 5
1,753 customer ratings
How does Amazon calculate star ratings?
Amazon calculates a product’s star ratings based on a machine learned model instead of a raw data average. The model takes into account factors including the age of a rating, whether the ratings are from verified purchasers, and factors that establish reviewer trustworthiness.

Anastasia Iazova
5.0 out of 5 stars Amazing quality
Reviewed in the United States on September 9, 2019
Color: *B1 Light Blcak+ClearVerified Purchase
All that I wanna say is thank you for seller.
Quality for this price is amazing. Italian design looks perfect.
You can wear these glasses with any outfit.
I love them. For 100% recommend this seller for you.

Monique Tsavidis
5.0 out of 5 stars I love these glasses!
Reviewed in the United States on October 9, 2019
Color: *B1 Light Blcak+ClearVerified Purchase
Absolutely love how well built, stylish and affordable these glasses are. Bought these glasses to counteract all the computer/screen time I engage in. Great buy! Can’t beat the price!
Read more

Justin
5.0 out of 5 stars Awesome Glasses for Good Price - Ignore People Saying Doesn't Block Blue Light
Reviewed in the United States on January 7, 2020
Color: *B1 Light Blcak+ClearVerified Purchase
These glasses are awesome! I'm not going to address all the great things about them as they are summed up very well by other reviewers but I will talk about all the one star reviews saying they do not block blue light. The color of light is dependent upon the wavelength of the electromagnetic wave in which that light photon travels at. Blue light has the shortest wavelength of light that is emitted from electronic screens (screens emit red, blue, and green light) and therefore has the most energy per photon. This type of light is most harmful to our health as it contains more energy than the other colors. Light is emitted as a spectrum, each individual color corresponding to a certain wavelength of light.

If you want to block ALL/MOST blue light, you must get glasses with a dark amber/yellow tint to them. This blocks a much broader range of blue light frequencies but do not look very good and shift the perceived color of everything else as well, two traits that are not very desirable. With these glasses, some of the most damaging light blue light is blocked, colors still look clear and accurate, and they look really good! A win-win! Please when purchasing a product or writing/reading reviews use some common sense as to what you are actually getting. Not only do they block blue light but I tested the blue light and the card provided with the product with my mom's prescription glasses with the blue light filter and they failed!

andrew_miami
5.0 out of 5 stars Helping your eyes from tiredness and protecting from blue light.
Reviewed in the United States on December 26, 2019
Color: *B1 Light Blcak+ClearVerified Purchase
I like the shape and style of this glasses, the quality is amazing. Blue light blocking glasses helps me reduce the damage on my eyes from my gadgets.
Read more

Amazon Customer
1.0 out of 5 stars DOES NOT BLOCK BLUE LIGHT
Reviewed in the United States on October 29, 2019
Color: *B1 Light Blcak+ClearVerified Purchase
DOES NOT BLOCK BLUE LIGHT. I bought these for work since I have to look at screens all day and while they do look cute, they do not block any blue light. I turn the blue light filter off on my phone and could see no visible difference between with the glasses on and with them off.
Read more

Danica Rushing
1.0 out of 5 stars Look cute but that's it
Reviewed in the United States on December 9, 2019
Color: *B1 Light Blcak+ClearVerified Purchase
These don't actually block blue light. Unfortunately, my friend is an eye doctor and she said these don't do anything. Real blue light blocking glasses would be highly tinted. These are clear and didn't pass any tests. They include a blue light and a card, hold it to the glasses but do it for at least 2 to 3 minutes. You will notice the card changes color.
Read more
28 people found this helpful
Helpful
Comment Report abuse

Bella
5.0 out of 5 stars Highly recommend!
Reviewed in the United States on December 28, 2019
Color: *B1 Light Blcak+ClearVerified Purchase
Great purchase! When I started university a couple years I never stepped away from blue ray lighting. Wether it be my monitor, a projector, computer at internship, or fluorescent lighting. It was everywhere. I started to get a sharp pain behind both of my eyes which weren’t quite the headache you feel behind your eyes, but a sharper pain. I went to my eye doctor eventually and it turns out I have 20/15 vision and blue light (all lighting) takes a bigger strain on my eyes since they can focus so well from such a length away. I used a $50 pair of blue light glasses that I ended up losing after a semester and could not repurchase (I was a university student. Aka- no money). I thought these may not work since they were so budget friendly but I though “Why not?”. When I wear these I never get strain ache and and have seriously loved it. I recommend these glasses. I also recommend buying a case for them and a lenses cleanser!
Read more
16 people found this helpful
Helpful
Comment Report abuse

Eamonn O'brien
1.0 out of 5 stars Total SCAM! Doesn't block ANY blue light!
Reviewed in the United States on January 4, 2020
Color: *B1 Light Blcak+ClearVerified Purchase
SAVE YOUR MONEY AND DON'T BUY THESE!
Ordered these because of the 1300 plus reviews. Clearly, they are ALL Chinese scam reviews.

Got them today, put them on and was completely disappointed. The lenses are total crap. Cheap material that distorts everything. I've worn BlueLight glasses for years and polarized sunglasses for decades. A good lens should virtually disappear and you forget you are looking through something, like the windshield of your car. These are the opposite - my wife who has worn glasses for 30+ years couldn't keep them on for more than a few seconds because it was obvious that there was a layer of bad plastic in front of your eyes.

I tried a little longer, but my eyes actually hurt MORE. So wanted to see how much blue light they actually did block. Pulled multiple blue light tests online, including a couple from ophthalmologists. Tried my other blue light blockers, passed every test easily. These did not pass AT ALL. NO BLUE WAS BLOCKED AT ALL.