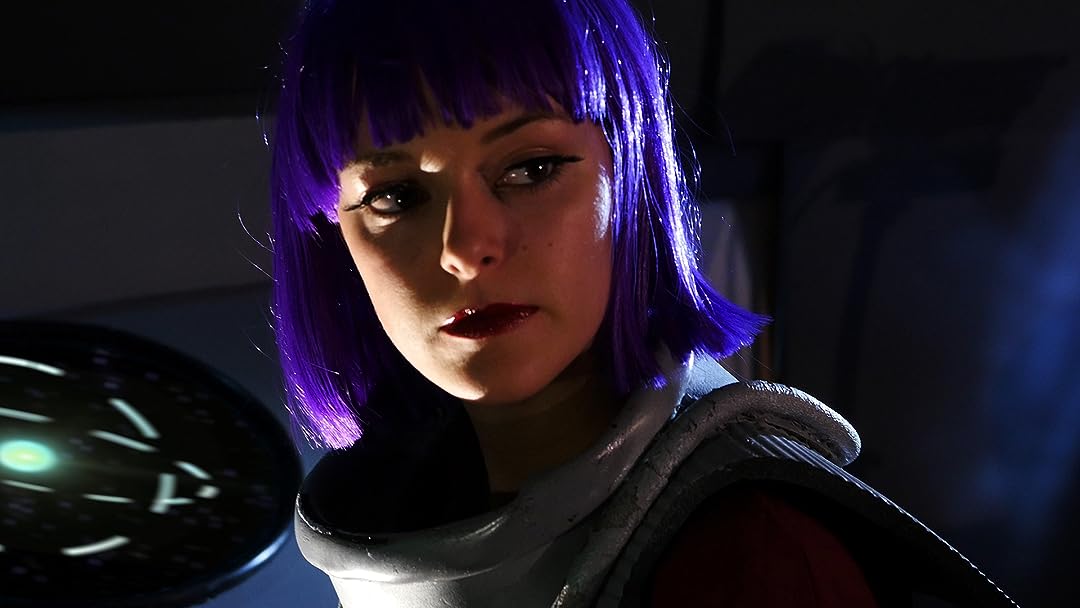 MReviewed in the United States on August 19, 2019
5.0 out of 5 stars
It's groovy
Verified purchase
Admittedly, I'm biased. I made this film. But if you're a fan of '60s sci fi, old school special effects and films like Planet of the Vampires, you might get a kick out of this. It skirts up to -- but doesn't quite cross into -- the realm of camp. The story is played straight, not for laughs, but the telling is tongue in cheek. It has space vampires, Mara bats, silver rockets a groovy soundtrack and a retro vibe.
12 people found this helpful

Sean BrodrickReviewed in the United States on August 31, 2020
4.0 out of 5 stars
Set in the future, a blast from the past!
Verified purchase
This great little movie is a call-back to the space exploration monster movies of the late 1950s/1960s. You can see they were budget constrained, but they did a lot with what they had. The spaceship in particular looks cool. Some toplessness (a topless vampire!), some very unconvincing gore that will make you chuckle with its grossness, and some moody atmospherics. Not as good as "Planet of the Vampires," which it resembles a little. But well worth watching. Considering this a low-budget effort, I'm giving them 4 stars. I would definitely watch more by the same crew.
2 people found this helpful

MReviewed in the United States on June 27, 2021
2.0 out of 5 stars
Obvious Product of an Inside Joke or Private Conversation
Verified purchase
The cinematography looks too bad to be intentional/forced. Limitations on budget and sets is one thing, but it isn't ever really clear what the characters are doing or going towards. Some angles are awkward and don't frame scenes in a way that would make the strange going-ons visually impactful or supporting the story. I think the 'dated' practical effects suffered because of the camera angles and poor direction to the actors. Especially the ones in Jetpacks.

There's a lot that isn't said or made clear-- I am going to plainly say that I don't even care the infected crew member is doing their psychedelic scrapbooking at the end-- it doesn't tell us anything about what happened or why it is significant. There are references to obscure artsy things that make me think this film is the product of a private conversation or even inside joke.

The story, per Director's own review of film, may be played straight and is not treated as a joke. In my opinion that is a failing in the 'depiction' of the sadly garbled 'narrative.' I wanted to get the point, but ultimately it didn't piece together into anything meaningful.

Hopefully team involved will make another film and focus on improving visual story-telling and improved cinematography. The Screenplay needs an outsider's perspective to weed out obscure fixations that don't translate to the audience or contribute to the story's progression. For example, who cares about the Soviet era Stamp or the Renaissance Christian Art? How do these things connect and does a viewer care long enough to find it before simply writing off the film?

Even 'Trek doesn't take itself seriously, but at least the narrative and depictions are cohesive.

J EReviewed in the United States on January 14, 2021
5.0 out of 5 stars
timesucker's planet
Verified purchase
a 1 star review for a few seconds of space vampire boobs? maybe a bit gratuitous but, maybe space vampire culture isnt hung up on partial nudity. a 2 star review based on the trailer? punk-ass way to review.
at times, dorky acting. very lame jetpack flying. old school claymation type effects. some holes in the story. overall, i liked this movie for what it is- low budget indie. i dont really think this is 5 stars, but it definitely deserves a B+ or A-. i do believe there was some talent behind this movie.
2 people found this helpful

mldowneyReviewed in the United States on May 21, 2021
4.0 out of 5 stars
Enjoy quirky writing, engaged acting, and inspired creativity over soulless CGI?
Verified purchase
The title blares this is not going to be a heartwarming examination of middle-class suburbia – what it doesn’t tell you is just how entertaining this independent film manages to be in just over an hour running time.
"Bloodsucker's Planet" is a somewhat prequel to Mark Beal's 2012 “Bloodsucker’s Handbook,” a decidedly-offbeat vampire movie, but you don't have to see the original to relish this one.
What “Bloodsucker’s Planet” is rather than a traditional prequel is this: a marvelous retro homage to the science fiction movies of the late Fifties and Sixties (and beyond), replete with dated technology and offbeat touches (Toad licking? A stop-motion cockroach?), all done in a straight-faced campy fashion set to a wonderfully-original soundtrack courtesy of David Jack Skinner.
The story is simple: a spaceship gets a distress signal; its crew sets down on Mara, a “there’s something in the mud” planet, and what you would expect from a film so titled ensues. However, Beal follows form only sporadically while playfully telling a skewed story through his actors and his visual flair.
If you’re looking for the latest Marvelesque CGI production values, “Bloodsucker’s Planet” is not your cup of tea. However, if you enjoy quirky writing, engaged acting, and inspired creativity, this film is a real delight.
One last treat: if you check out the director’s commentary, Beal is joined by some of his cast and crew as they reveal secrets of DIY filmmaking. You’ll never look at Tupperware and yoga mats the same way again.

jeffReviewed in the United States on February 19, 2020
5.0 out of 5 stars
I love it..
Verified purchase
I like the retro look and feel. I swear sometimes the old school effects are better than all the CGI crap we are forced to watch with any new film or TV.
The purple hair reminded me of the girls working on the moon base in the 70s show UFO.
The space rat that wanted sludge was groovy man.

Tango DownReviewed in the United States on May 25, 2021
2.0 out of 5 stars
Steer Clear!
Verified purchase
A modern day retro B-flick film. Imagine the trippiness of BarBarella without the cool story of the sexy bit mix in a stupid "space vampire" backstory and a talking cockroach with a frog eating weirdo. Horribly bad flick!
2 people found this helpful

A.D.RackleyReviewed in the United States on July 11, 2020
5.0 out of 5 stars
I'd love to know the mind's...
Verified purchase
behind this production and of course more about Adriana's pink secret. Had fun with the whole thing. Retro to the max and every bit as good or better than the ones that played back then. The knockers on the vampire queen alone would've caused teenage boys heads to explode back in the 50s, so there's that. Bravo to the crew and Adriana, I'm ready to play doctor anytime.
See all reviews
Back to top
Get to Know Us
Make Money with Us
Amazon Payment Products
Let Us Help You
EnglishChoose a language for shopping. United StatesChoose a country/region for shopping.
© 1996-2021, Amazon.com, Inc. or its affiliates