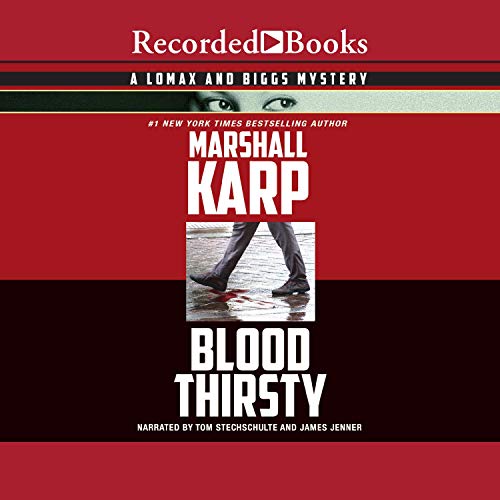 Acclaimed television writer Marshall Karp has been lauded for his Mike Lomax and Terry Biggs mysteries, including The Rabbit Factory. These two contentious friends investigate Hollywood homicides that no one else will touch. In their second teaming, Lomax and Biggs are on the trail of a killer who knocked off one of the most despised men in the movie industry. There’s only one problem - the lead suspect just got plugged as well.

Your audiobook is waiting!
Learn more about Membership
List Price: $24.49
You Save: $3.54 (14%)
By completing your purchase, you agree to Audible’s Conditions Of Use
Sold and delivered by Audible, an Amazon company

David A. Freas
4.0 out of 5 stars If you like Robert B. Parker, give Marshall Karp a try.
Reviewed in the United States on November 11, 2016
Verified Purchase
Karp has a voice similar to Robert B. Parker’s, only a bit more sardonic and acerbic.

After reading a more serious book by Michael Connelly, this lighter story was like a sorbet – something to ‘refresh’ my reading palate.

But make no mistake. This is not a ‘fluff’ novel. Karp writes a complex and attention-holding tale about murders among the Hollywood elite.

Karp’s writing is smooth flowing and the banter between Lomax and Briggs rings true.

His next book is on my ‘To Read’ list.
Read more
2 people found this helpful
Helpful
Report abuse

marifa
4.0 out of 5 stars So interesting and so funny
Reviewed in the United States on February 4, 2016
Verified Purchase
This is the second instalment of the series and Boy, did I lap it up! It can be read on its own because there is quite a bit of retelling of the first book, as so much of this book is related to the previous one, but you will miss out on the relationship between characters. A really interesting plot solved with traditional detective work, and plenty of laughs.This book loses the sad undertone in Lomax's life. It is really a rare combination in that the plot is not undermined by the laughs, or the other way around. Ideal for a weekend on the couch (you won't be able to read it in more than two days) after a hard week's work.
Read more
One person found this helpful
Helpful
Report abuse

MED
5.0 out of 5 stars Funny, easy read and leaves you wanting more...
Reviewed in the United States on November 6, 2011
Verified Purchase
Marshall Karp's second installment in the Lomax and Biggs series is a winner. Lomax and Biggs are riding high after solving the Familyland murders from the debut installment, The Rabbit Factory. A Hollywood producer, Halsey Bates, has optioned their story. But before they can even meet the man Bates wants to bankroll the film, the intended financier is murdered - and he's just the first victim. Big Jim Lomax is back as is Lomax's girlfriend Diana and Biggs' family of Marilyn and daughters. There is witty dialogue and just enough action. The story takes a slight right turn but all is resolved in time for the credits to role. You find yourself casting the detectives in what must turn out to be a movie or TV series. Here's hoping Karp keeps writing this series.
Read more
Helpful
Report abuse

Zigzag67
5.0 out of 5 stars BIGGS AND LOMAX
Reviewed in the United States on June 6, 2014
Verified Purchase
After rereading NYPD Red to prepare for NYPD Red 2 I wondered who is this Marshall Karp that collaborates with James Patterson on such great mysteries. Very simple. Amazon Kindle Fire store opened up a new (to me) mystery writer who introduced two lovable, funny and believable characters that bring along with them people that you would really like to know. I have since read three Lomax and Biggs series mysteries. Story lines are great! I'm actually sad after I race through the book and turn the last page. If you enjoy characters and the journey of reading a book you will not be disappointed. Gee I might actually go see these guys on a movie screen.
Read more
2 people found this helpful
Helpful
Report abuse

John Phillips
5.0 out of 5 stars Hooked On These Books
Reviewed in the United States on April 5, 2017
Verified Purchase
I started reading fictional character series books with William Connelly's Harry Bosch series. Having read the entire series to date, I thought that no other author could top it. I was incorrect. That series now plays second fiddle to the Marshall Karp "Lomax & Biggs" series. Two attributes put it on top: the lasting partnership of two detectives (as opposed to partnership changes throughout) AND above all else is the great humor between the detectives Lomax & Biggs. My one regret is that the series is not nearly as long (# of books written) as Connelly's Bosch series.
Read more
Helpful
Report abuse

PWA
5.0 out of 5 stars ANOTHER REALLY GOOD LOMAX AND BIGGS STORY!
Reviewed in the United States on May 4, 2018
Verified Purchase
Another well written Lomax and Biggs story by Marshall Karp. I love this series. The two are trying to find the killers of a production company employees and why they drain their blood. In the true fashion of this series, there are twists and turns, along with a bit of well placed humor. I'm really liking Lomax and Diana. I always lose track of time reading this series, it's just that good and so interesting. Can't wait for the next book to come out.
Read more
Helpful
Report abuse

Joni Clevenger
5.0 out of 5 stars Too funny!
Reviewed in the United States on November 23, 2012
Verified Purchase
Lomax & Biggs are two characters you are going to miss like crazy when you finish. Not only are they funny, they're human and have some depth with great backstory. Karp isn't just funny, he's incredibly intelligent, not to ention warped, and it shows in his work. Some authors are great writers and some are great story tellers. Karp is both and that is rare. Buy this book, buy all his books. You will not be disappointed until the end when you realize you just ran out of Karp books to read.

I don't give reviews easily or lightly and I don't write fan letters. I'm simply too critical and simply don't feel that a mere reader should criticize someone's work, unless paid to do so. If I don't like a book or a series I simply stop reading it and don't pass it along. I've read some books that are so blatantly bad that I simply cannot believe someone published them. I'm not a great writer, nor a great story teller but I'm a phenomenal reader. This book is fun, light, smart and Karp certainly puts the entertainment back into the mystery genre.
Read more
Helpful
Report abuse

George
4.0 out of 5 stars Very Good
Reviewed in the United States on April 8, 2021
Verified Purchase
As many have said, Karp is an excellent writer. He is particularly good with dialogue, like the late Robert B. Parker. The only reason re the lack of a final star is that the plot is a bit over-the-top, which is common with mystery/thriller writers. Still, extremely entertaining.
Read more
Helpful
Report abuse
See all reviews

Steve
4.0 out of 5 stars Morcombe and Wise of detectives!
Reviewed in the United Kingdom on June 8, 2014
Verified Purchase
I'm a new fan of Lomax and Biggs. They are the comedy duo of the detective world. Many authors have tried in vain to create the buddy detective pairing but few succeed.....Karp is one of the successful ones.
The banter between Lomax and Biggs is one of the stars of the novel yet remains serious at times. A little too Hollywood at times but hey....it's set in Hollywood!
Will be keeping an eye out for the next one when Amazon pulls their finger out and releases the ebooks of the already releases printed versions.
Treat yourself and have a chuckle along with Lomax and Biggs
Read more
Report abuse

Joy Wheeler
5.0 out of 5 stars Great book
Reviewed in the United Kingdom on June 6, 2015
Verified Purchase
I just love who-dun-it's and comedy and this book put it all together perfectly
Read more
Report abuse

martin cox
1.0 out of 5 stars didn't enjoy
Reviewed in the United Kingdom on November 23, 2012
Verified Purchase
I loved the first book - The Rabbit Factory so couldn't wait to get into this one but didn't enjoy the celebratory status of the main characters.
Read more
Report abuse