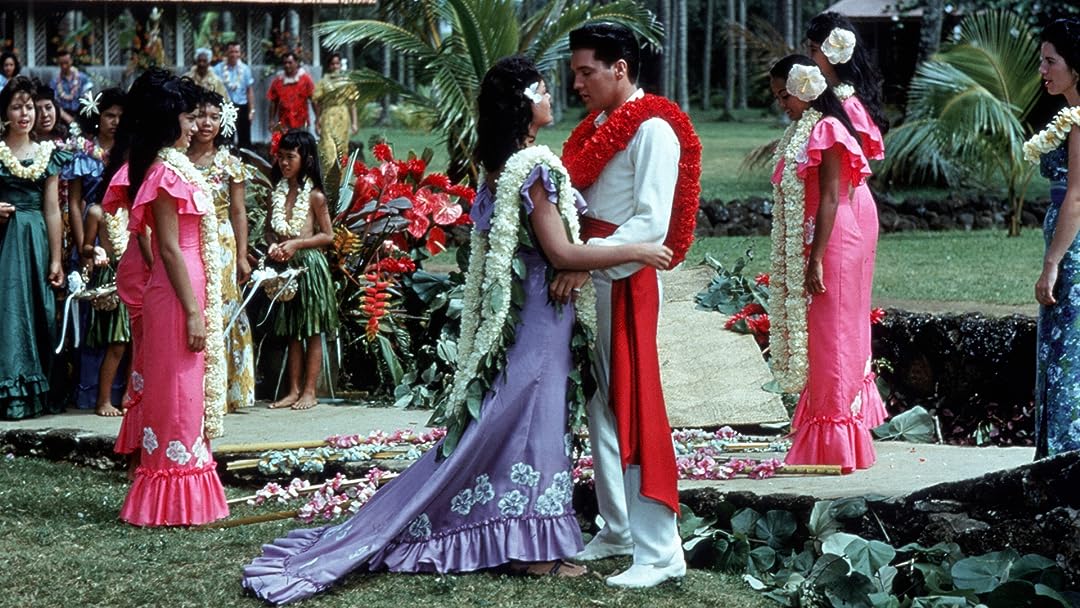 (2,712)
6.11 h 41 min1961X-RayPG
After arriving back in Hawaii from the Army, Chad Gates (Elvis Presley) defies his parents' wishes for him to work at the family business and instead goes to work as a tour guide at his girlfriend's agency.

PeriwinkleReviewed in the United States on March 30, 2020
5.0 out of 5 stars
Don't expect PC propaganda
Verified purchase
This lovely film was recorded in the early 1960s. If you want political correctness please go elsewhere. What it does have is beautiful scenery and some of the most beautiful songs ever written performed by a wonderful artist. It also has the most non-stereotypical role I believe Angela Lansbury ever took. Her performance as a southern "lady" is par excellence. This show is a lot of fun and was over before I realized it.
11 people found this helpful

BBQ Corn ChipsReviewed in the United States on March 9, 2016
5.0 out of 5 stars
Very good Blue Hawaii DVD. Transferred well and improved sound to Stereo which is great. Elvis sounds great.
Verified purchase
The Blue Hawaii DVD starring Elvis Presley was good movie. For a movie back then, it was enjoyable and fun.

The color is great in this movie. The full theatrical 2:35:1 Panavision frame is presented in a very nice anamorphic transfer.

The print is fabulous for a picture of this age. There are occasional blemishes of a speck or two on the screen. Once in a while the picture to the left and the right isn't as clear as the center, but it was still very good overall.

Digitally it was very good with no squares or compression issues with the transfer to DVD. It's great to see that the film preserves the background, landscape, scenery and colors well over time.

The sound has been re-mastered for Dolby Digital 5.1. The 5.1 mix sounds pretty good with vocals from Elvis in the center channel and the instruments coming up on the satellites. The rear channels don't really get used at all, it's mostly the front 3 speakers and the sub. It is a very crisp, clean, deep stereo Elvis you get.

The original mono is also included which sounds terrible when compared to the 5.1 sounds.

The film is an old movie, and it is hard to compare to movies of today. But for back then, it was a big deal Elvis in a movie.

I recommend this DVD. It was transferred very well. Picture and sound is good enough or very good, and it was an enjoyable movie pretty much.

It is nice that it is in stereo rather than mono like on the LaserDisc version.

pasReviewed in the United States on February 9, 2020
5.0 out of 5 stars
Great movie for young and old!
Verified purchase
This movie was bought as a gift for the nursing home that my mom now stays at. While on a visit I noticed how many of the residents responded to Elvis' s music. They would get up and dance and sing. So I thought a movie might be fun for them too. Plus it was one of my favorites too. I know it will be enjoyed for many showings.
8 people found this helpful

Patrick in New YorkReviewed in the United States on July 16, 2017
4.0 out of 5 stars
LET'S GO ON A MOONLIGHT SWIM
Verified purchase
Yes, Elvis Presley's acting talent was better showcased in Jailhouse Rock and King Creole. But I like Blue Hawaii better. In fact, it's my favorite of all his movies. Why? Because it's just so much fun. Cute story, wonderful music and, oh, that Hawaiian scenery. If I want to explore "classic cinema" I'll watch Citizen Kane or Casablanca. If I want the enjoyable escapism of "the movies" Blue Hawaii will do just fine.
22 people found this helpful

ToddReviewed in the United States on May 19, 2021
3.0 out of 5 stars
Silly, hokey, ridiculous, predictable and oh, yes, fun!
Verified purchase
I didn't buy this DVD for the story, which is good because the story is lame and predictable.
No, instead I bought it for the nostalgia, the over-the-top performances, the classic songs popping up at the right moments, the campy script, and for the silly pleasure that is an old Elvis movie.
These movies will never be Oscar contenders but they fill a gap in our music and cultural history that comes from a different time, when cars were station wagons and the boys and girls always had big parties on the beach, surrounded by the "natives" wherever the movies were shot.
Despite the expected shortcomings, there is nothing like seeing Elvis in his prime to see what an important part of our music and cultural history he has played.
Don't buy this for a cinematic classic.
Buy it for the fun and the beauty of our history and past.
Elvis's "Viva Las Vegas" is still his best campy film, but for $5, you can't go wrong with "Blue Hawaii."
Enjoy and don't forget the popcorn. :)
One person found this helpful

RZ_SB_1982Reviewed in the United States on April 14, 2019
3.0 out of 5 stars
Nice music but doesn't stand the test of time
Verified purchase
I recently visited Graceland and wanted to indulge in some Elvis music and movies I had seen on display there. The music is catchy and Elvis in his prime, however, I found it hard to watch given the misogynous script. The dialogue and actions don't stand the test of time and it is hard to watch the women in the movie endure his infidelity, condescendence and even spanking at some point. It may have been a different time but I couldn't help thinking WTF. Wouldn't watch that with my daughter for sure.
6 people found this helpful

RioReviewed in the United States on November 26, 2021
5.0 out of 5 stars
A Kinder, Gentler Time in Hawai’i...
Verified purchase
Yup- it was 1961, two years after Statehood. The islands came out of the post WWII slump, Hawaii’s Legislature was made up of notable Asian veterans who returned home with GI Bill subsidized college degrees, Hawai’i tourism was eager to expand, hotels/construction were booming, and pineapple/sugar were king.
Elvis’ homecoming United Airlines flight landed at the old Lagoon Drive Airport location, the Spencecliff Restaurant chains were all over, Kalakaua Ave was a two-way street, Elvis’ girlfriend Maile owned that great red MG sports car, and Hanauma Bay was the scene for his beach shack.
Fast forward- watched this movie recently with a friend from New Jersey who’s fallen in love with Hawai’i. Enjoyed the story line, Angela’s Landsbury’s comical portrayal of Elvis’ mom, and even the vulgar but period racial stereo type of her Chinese houseboy Ping Pong. This film is fun, has no special effects, has only mild/fun violence (via the restaurant fight scene), great music by the King, has one spoiled brat tourist girl character, and the boy loves girl then marries her theme. Elvis had a fond legacy in the islands- raising money to build the Arizona Memorial to his world wide concert broadcast from the Blaisdell Arena. He wasn’t perfect, but always the King...

DaisyReviewed in the United States on July 13, 2013
5.0 out of 5 stars
It’s a Hit!
Verified purchase
When I got this movie, I didn’t know if it would be good or not. But when I watched it, it turned out to be even better than good…it turned out to be great! It was humorous, romantic, and musical; all of the elements of a great Elvis movie. However, unlike a couple other Elvis movies, the plot is very well put together.
The movie is about a young man named Chad who is returning from the army to his home (and his girlfriend) in Hawaii. His parents want him to follow right in their footsteps and help run their pineapple plantation, but Chad wants to get a ‘real job’, one that he earned, not inherited. He gets a job as a tour guide, but when his girlfriend thinks that he’s falling for the pretty schoolteacher he’s driving around, she gets jealous and the fur flies. The songs include Blue Hawaii, Hawaiian Wedding Song, Ito Eats, Can’t Help Falling in Love, Rock-a-Hula Baby, and many others.
The stellar cast includes such cameos as Floyd the barber from The Andy Griffith Show and Iris Adrian from The Fast and the Furious, The Love Bug, and The Jack Benny Program. It was produced by Hal B. Wallis, the same man who produced True Grit, Rooster Cogburn, and Gunfight at the O.K. Corral, all great movies. This DVD also includes the original theatrical trailer, making it even better (as if it was possible!).
21 people found this helpful
See all reviews
Back to top
Get to Know Us
Make Money with Us
Amazon Payment Products
Let Us Help You
EnglishChoose a language for shopping. United StatesChoose a country/region for shopping.
© 1996-2022, Amazon.com, Inc. or its affiliates