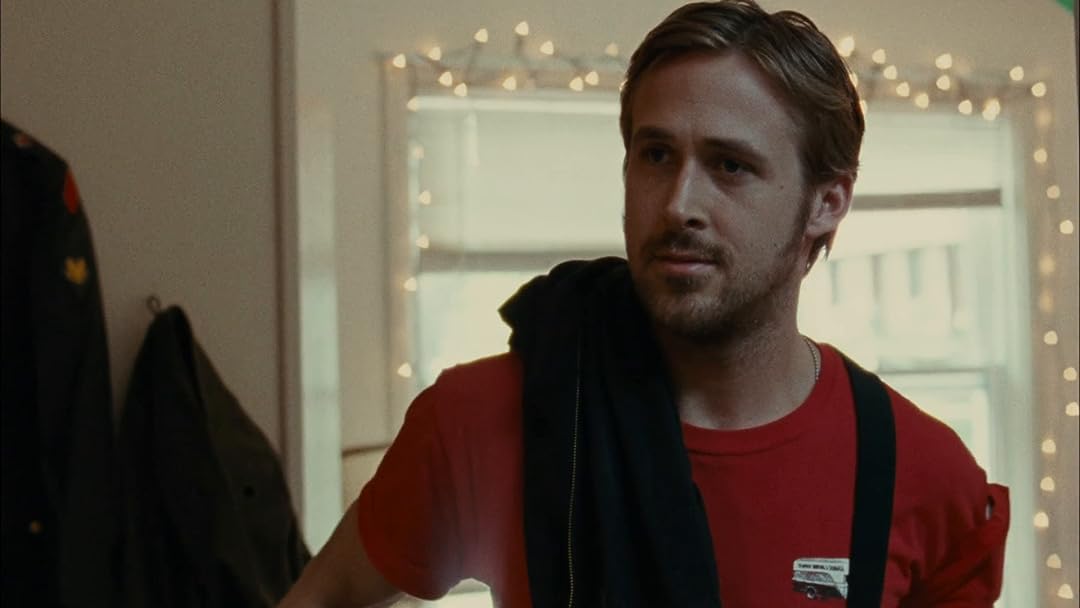 (1,379)7.31 h 52 min2010X-RayR
A complex portrait of a married couple who have reached an impasse in their relationship. Narrated in flashback, the film tells the story of love that is lost and found. Dean and Cindy remember their best moments together as they give themselves one more night to try to save their rocky marriage.

RoseReviewed in the United States on July 21, 2020
4.0 out of 5 stars
"Why Do You Have to Make Money Off of Your Potential?"
Verified purchase
The title of my review is my favorite line in the movie.

I generally do not like movies that are told in this kind of circular, flashback form, and that's usually because I cannot tell whether I am watching a past or future scene. But, in Blue Valentine, Ryan Gosling's faux receding hairline always clued me in!

Ryan Gosling does "endearing" very well, but I'm not so sure about the rest of his range. He is nice to look at, though, and even works his strabismus well.

This movie, however, belongs much more to Michelle Williams. I know that she did many of these scenes after Heath's death---and I don't know if her acting depth was in spite of that tragedy or BECAUSE of it---but she brings depth and nuance to the role. It also doesn't hurt that her wide mouth with its bow-shaped pout is loved by the camera and easily expressive (what Dean simply calls "beautiful").

The ending was ambiguous, but, while the credits rolled, there was a photographic firework montage that was sentimental, unique, and impressive.

Christina ReynoldsReviewed in the United States on October 17, 2020
5.0 out of 5 stars
Heart Breaking and Real
Verified purchase
my rating is more of a 4.5.
Thank you for reading in advance

Blue Valentine is a 2010 American romantic drama film written and directed by Derek Cianfrance. Cianfrance, Cami Delavigne, and Joey Curtis wrote the film, and Michelle Williams and Ryan Gosling played the lead roles as well as serving as co-executive producers for the film. The band Grizzly Bear scored the film. The film depicts a married couple, Dean Pereira (Gosling) and Cynthia "Cindy" Heller (Williams), shifting back and forth in time between their courtship and the dissolution of their marriage several years later.

For a while now I've been trying to put my finger on the reason why I like Ryan Gosling as an actor as much as I do. After watching this film a light bulb went off in my head; specifically, the scene in which he plays the ukulele and sings is a wonderful representation of the dedication he has to his craft. This isn't the first time Gosling has shown us that he's perfectly capable of learning a new skill - he plays the piano himself in ‘La La Land’ - and more than that he has a way of making himself look like a natural. His young and sometimes audacious spirit constantly puts him in a position to challenge himself and rise to the occasion, and what's not there to admire about that? Gosling is simply a talented spectacle of a man, and I mean that in the most endearing way ever.

The tone and the emotions present in this film make it easier for your average audience member to relate to these characters. Just about anybody knows what it is like fall in love with someone when it is least expected. In addition to that, the slow burn that sometimes accompanies and follows is a phenomenon that is explored in a way that feels authentically vulnerable. The director is sure to avoid feeding its audience small and shallow pieces of optimism along the way. No matter your background or previous experiences, there is at least one moment you will feel connected to on some level. It goes without saying that ending with a conclusion that isn't happy may turn some people off, But I see it as a brilliant opportunity to breathe life into a plot that unfortunately mirrors reality.

My one complaint, perhaps, would be that the segue of emotions between the main characters is not always seamless. it is easy to understand how Dean and Cindy fall in love. Is it easy to understand how some moments may initiate conflict between the main characters. The confusion is in not having a more insightful understanding about the changes in emotion they have overtime. It almost seems as if there was a rush to get from point A to point C, and in this leaves point B being almost detrimentally neglected. The trivia of this film states that this was at first intended to be a love story, and that the director eventually chose to make this a representation of the dissipation of these relationships. I respect the director's decision to go this direction, but that is just something to keep in mind when watching this film.

In regards to cinematography all I can do is echo comments that have been made for me. The combination of shot quality and editing make this feel like a documentary of sorts; the audience truly feels like a mutual Observer and is invited to project their own feelings onto scenes as often as they would like.

An astounding balance of authenticity and fantasy: I would recommend!
2 people found this helpful

OtisReviewed in the United States on November 9, 2014
5.0 out of 5 stars
In a Word? Raw
Verified purchase
Too real! This film, I think, is so honest and so emotionally intense that it actually bothers some people. What's truly astounding about Blue Valentine is that it successfully cuts back and forth between present-time, when Dean and Cindy are completely falling apart, and their courtship years ago. Other films have tried this kind of structure of parallel timelines (Eastwood's Flags of Our Fathers comes to mind), but what's unique about Blue Valentine is that it doesn't drag! It builds and builds and the parallel timelines complement each other PERFECTLY. This film was originally slated for an NC-17 release (which equals box-office doom), but was changed to an R after appeal. And it's a good thing, too! This is a showcase of some of the finest acting I've ever seen. Ryan Gosling and Michelle Williams were almost painfully perfect in their characters.
This film is really kind of a masterpiece....
42 people found this helpful

CNINGHMReviewed in the United States on December 8, 2016
4.0 out of 5 stars
There are benefits to being alone
Verified purchase
I watch this every Valentine's day to remind myself how good it is to be alone LOL
29 people found this helpful

PJReviewed in the United States on February 19, 2021
2.0 out of 5 stars
Super boring and depressing
Verified purchase
I watched this because I like the main actor/actress in the film. So first off the acting was very good. But the storyline was so depressing, drawn out and boring. At the end, I thought WTF? This can’t possibly be the end! Its like the end of a very crappy day. I honestly was glad the movie was over and regretted the time I wasted watching it. I have to wonder why the heck would you make a movie like this? Worse yet, why would such highly regarded actors waste their time, unless it just paid well. It’s not inspirational and nothing gets solved. You basically have to suffer thru two peoples depressing relationship and crappy weekend. I knew there was a reason we stopped watching Hollywood movies and started watching YouTube instead.
2 people found this helpful

Marcus LosGreatReviewed in the United States on October 9, 2021
5.0 out of 5 stars
Men need more Blue Valentines!!
Verified purchase
Men need to watch more movies like Blue Valentine.
Now before we get started lets get a few things out of the way.
Im not a sour grapes type of guy. No one left me and now Im scorned at the world.
Im merely a guy who is paying attention to what it happening to my uncles, my friends, and men around me.
I didn’t make up the statistic 80% of marriages are ended by women. That’s a fact! Please look it up.
I was raised by a single mother. My mother used to get beaten by the men she entertained. When I grew up, I wanted to treat women the best way I knew how and never ever put my hands on them.
I believed this made me a good man. I believed it made me a better man than the men my mother entertained.
What woman wouldn’t want to be with that idea of a man?
LOL.
Fast forward to my dating life. I would date these women sometimes for 2 to 4 years. Some would leave me. Some would cheat on me.
No sweat off my nose. It just wasn’t meant to be right.
I then get married. We hit the 10-year mark and I start to notice many of the things that happened in the movie.
She’s not happy anymore. She doesn’t like me anymore. And she begins to withhold sex.
As a man you believe its your job to fix it. You’re the leader right. Wrong!
The more you try to fix it the more it comes apart. LOL
Why? Because you don’t control her happiness….you don’t control how she feels about you.
This is what the man in this movie learns.
She didn't leave him because he drank too much.
She left him because she wasn't happy and she didn't like it anymore.
Women love the idea of marriage but cannot live up to the level of commitment it requires.
This is why every man in America should watch this movie.

E ShippReviewed in the United States on June 14, 2018
4.0 out of 5 stars
One of Michelle Williams’ best, most heartbreaking rolls from the queen of cinematic heartbreak
Verified purchase
This movie is brilliant but hard to watch. I knew that it showed the rise and fall of a relationship but what I didn’t realize is that it uses flashbacks to go back and forth, which jerks the viewer back and forth between tremendous sadness and bits of happiness. Michelle Williams is absolutely fantastic and this is one of her best roles but I doubt that I’ll be able to rewatch it because it’s just so sad. The ukulele scene from the trailers, though, is as sweet as advertised and is the high point of the movie. Also, read the IMDb trivia because the trivia on the preparation for this movie is really interesting.
7 people found this helpful

sefriendlyguyReviewed in the United States on March 31, 2019
2.0 out of 5 stars
WONDERING WHY
Verified purchase
THIS MOVIE STARTS WITH A RYAN GOSLING, THE HUSBAND, I GUESS AND MICHELLE WILLIAMS, THE WIFE, I AM GUESSING WITH THERE LITTLE DAUGHTER AL PLAYING TOGETHER AS A FAMILY
FROM THERE ON, I HAVE NO IDEA WHATS GOING ON AND WHY, THE MOVIE JUMPS AROUND
SO MUCH AND YOU SEE DIFFERENT EMOTIONS, YOU NEVER KNOW , DO THEY STILL LOVE EACH OTHER
OR DO THEY ALWAYS FIGHT AND HAVE MAKE UP SEX, ONLY REASON I DID NOT GIVE THIS MOVIE A 1,
WAS THE GOOD SEX SCENES WITH RYAN HAVING ORAL ON MICHELLE WILLIAMS
EVENTUALLY AT THE END OF THE SHOW, YOU SEE WHERE THEY GO BACK TO HER PARENTS HOUSE AND
SHE PICKS UP HER DAUGHTER, HOW LONG HAS SHE BEEN THERE? I CAN'T TELL
SHE TAKES HER DAUGHTER TO HER PARENTS AT THE FIRST OF THE MOVIE, BECAUSE
HER AND RYAN ARE GOING ON A DATE NIGHT AND THEN SEE WHAT HAPPENS WHEN THAT PART STARTS
2 people found this helpful
See all reviews
Back to top
Get to Know Us
Make Money with Us
Amazon Payment Products
Let Us Help You
EnglishChoose a language for shopping. United StatesChoose a country/region for shopping.
© 1996-2021, Amazon.com, Inc. or its affiliates