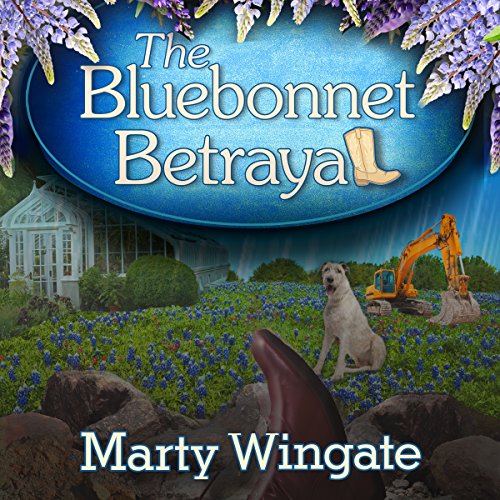 Pru's life in England is coming full circle. A Texas transplant, she's married to the love of her life, thriving in the plum gardening position she shares with her long-lost brother, and prepping a Chelsea Flower Show exhibit featuring the beloved bluebonnets of the Texas hill country. Technically, Twyla Woodford, the president of a gardening club in the Lone Star State, is in charge of the London event, but Pru seems to be the one getting her hands dirty. When they finally do meet, Pru senses a kindred spirit - until Twyla turns up dead.

Although Twyla's body was half buried under a wall in their display, Pru remains determined to mount a spectacular show. Twyla would have insisted. So Pru recruits her husband, former Detective Chief Inspector Christopher Pearse, to go undercover and do a bit of unofficial digging into Twyla's final hours. If Pru has anything to say about it, this killer is going to learn the hard way not to mess with Texas.

Special invitation from Audible!
Learn more about Membership
List Price: $24.49
You Save: $3.54 (14%)
By completing your purchase, you agree to Audible’s Conditions Of Use
Sold and delivered by Audible, an Amazon company
Share

Jeanie D
5.0 out of 5 stars A Texas Garden in Chelsea
Reviewed in the United States on August 2, 2016
Verified Purchase
‘Bluebonnet Betrayal’ is one of Marty Wingate’s best mysteries! I have enjoyed the five the Potting Shed Mysteries to date and really like Pru, an amazing gardener transplanted from Texas to England to the land of her late mother’s birth. Since then, she found a brother she was not aware of, and met and married Christopher, a former Detective Chief Inspector in Chelsea. She has made a name for herself not only in the horticultural world but also as a woman who helps solve murders occurring at or near her jobs.

Pru Parke was hired by a garden club from her home state to oversee the start of work on their garden that was part of the Chelsea Flower Show; it was a great honor that they were chosen for it. The president of the club, Twyla, and several ladies would travel to oversee and complete the work. Twyla’s dream for the garden was to use the Texas state flower, bluebonnets, with other native plantings and rocks.

A home had been leased for the Texas ladies to stay in. At the Chelsea Flower Show site, Pru met Chiv, in charge of construction and growing the plants, and the designer, Roddy. There was a company sponsor who underwrote the costs of their garden, GlobalSynergy, under the direction of Damien Woodford, and Forde, a one-man company who planned to sell to the sponsor. Pru picked up the Texas ladies at the airport, but Twyla hadn’t come yet and would arrive a couple days later. In the meantime, Pru made certain the ladies were settled into their temporary home.

A couple days later, returning to the site in the early evening, Pru met Twyla, who arrived that day and wanted to see the progress. Twyla told Pru there was something troubling about the project, but they would discuss it the next day. The next morning, Twyla was found dead on the jobsite, crushed under a pile of rock. Murdered.

Pru was determined to continue work on garden to honor Twyla’s garden plans and her memory. Pru’s life began to be in danger, and trouble on the site increased. Chris came to work on the site, doing mostly laborer’s work, to be an unofficial undercover presence to protect his wife.

Pru and Christopher are defined very well, with Pru being the primary protagonist. Pru is wise and a hard worker, excellent as a head gardener or manager. In a genre where many protagonists are in their 20’s or 30’s, it is exciting to see a vital woman in her 50’s with an open, active mind who works well with all ages. I like Pru and enjoy watching her work both as head gardener and on cases that occur. Other characters are defined as fitting their roles and we learn more about them, including the bad guys/ gals, throughout.

The research and depth of characters are wholly satisfying, as is the manner in which the plot was executed. In this novel we learn about the fragile ecosystem in Texas and how bluebonnets contribute to saving that ecosystem. The author writes with a passion for her subject. The bad guy(s)/ gal(s) and motive were a challenge to identify. The intense suspense and satisfaction of the person(s) being captured has left me looking forward to visiting Pru again. I highly recommend ‘Bluebonnet Betrayal’ to the reader who enjoys well-written cozies that are challenging to solve with a mature, yet young-at-heart, protagonist.

I received a copy of this book from the publisher and NetGalley in exchange for my honest review. All opinions are my own, and no monetary compensation was received.
Read more
2 people found this helpful
Helpful
Report abuse

c-lu
4.0 out of 5 stars Texas Bluebonnets in Chelsea Garden
Reviewed in the United States on December 5, 2016
Verified Purchase
In this story Pru travels to London to stand in for Twyla - the person responsible for bringing Texas Bluebonnets to the Chelsea Garden. Pru is enthusiastic about the garden and her beloved bluebonnets but Twyla hints that there is a problem. Before Twyla can share the "problem" with Pru she's killed. Pru and the rest of the Texas Garden Club and the London contingent decide to finish the garden as Twyla's legacy, but there are conflicts galore and a murderer amongst them.

This is another good book in the series with lots of possibilities and twists - and a bit of humor. A bit slow at times, it speeds up nicely. Although the fifth in the series, it can be read as a stand alone.

I received a complimentary copy of this book; however, that has not affected my review.
Read more
Helpful
Report abuse

Kindle Customer
3.0 out of 5 stars Nice Continuation of the Series
Reviewed in the United States on November 17, 2016
Verified Purchase
This entertaining story builds stronger ties between England and Texas than in previous books in this series. While a nice continuation of the series, I enjoyed the plots and characters in her earlier books more. This was a fun read for a rainy Saturday,and I look forward to more books in the Potting Shed series!
Read more
One person found this helpful
Helpful
Report abuse

b. mcardle
5.0 out of 5 stars I didn't want it to end.
Reviewed in the United States on August 23, 2016
Verified Purchase
I beleve this is the best book yet. I was a bit disappointed in the last book's ending but this one is superb. The plot is strong, characters are well crafted and believable, and tension remains high all the way through the story. I knew the bluebonnets would make it to the garden but the journey was fascinating and most satisfactory.
Now the bad part: waiting for the next book!!
Read more
6 people found this helpful
Helpful
Report abuse

Cuileogcailin banaltra
5.0 out of 5 stars Best Book In the Series
Reviewed in the United States on September 6, 2016
Verified Purchase
I love this series, and Marty Wingate has written her best yet!
Pru Parker is given an opportunity to work on the Chelsea Flower show with a group from her home state of Texas.
When the leader of the group is murdered, Pru is once again drawn into murder and mayhem. This time her husband Christopher works undercover with her to dig out the truth. They work hard to find the culprit and save their spot in the show.
Marty Wingate's writing gets better with each mystery. All of the books in this series are fantastic, and I highly recommend them!!
Read more
One person found this helpful
Helpful
Report abuse

E. S.
2.0 out of 5 stars Yuck
Reviewed in the United States on March 9, 2017
Verified Purchase
Other readers will be disagreeing with me for sure but I enjoyed this series til I got to this book, nothing ever happened, it always rained, no progress made, talk talk talk, finally I skipped ahead and didn't even care who did it, and the author has a fetish for hair, someone is always moving a strand of hair behind their or someone else's ear and Pru always is removing her clip, combing through her hair and replacing the clip. Enough already. I won't be reading the upcoming one. Snore. I am being kind giving it even two stars.
Read more
Helpful
Report abuse

Angela Johnson
5.0 out of 5 stars An interesting murder plot.
Reviewed in the United States on April 24, 2018
Verified Purchase
Learned a lot about biodiversity and wild plants and flowers without the author being preachy. I'm from San Antonio, Texas, not far from Austin, so I know about bluebonnets. Even though there were a lot of characters, they each had their own separate identity. The ex-inspector and his wife (main characters) were believable. The motive for murder was not clear until toward the end.
Read more
Helpful
Report abuse

restless wanderer
5.0 out of 5 stars As good as expected!
Reviewed in the United States on August 30, 2016
Verified Purchase
Lots of complicated relationships led to lots of suspects, and one harrowing experience after another brought near disaster to the attempts of bringing a Texas landscape to Chelsea. All in all, this was yet again another enjoyable visit with Pru and Christopher as they contended with murder and mayhem, all while attempting to meet deadlines with, or sometimes without, the aid of an unruly bunch of Texas gardeners.
Read more
Helpful
Report abuse
See all reviews

Mr. D. R. Goodman
4.0 out of 5 stars Good storyline but American spellings
Reviewed in the United Kingdom on December 26, 2018
Verified Purchase
Good story, but again the American spellings and expressions prevent it being five stars. This time the story revolves around the Chelsea Flower Show, with a team coming over from Texas to enter a garden, but their leader being murdered. It could have been any one of several involved, and you will be trying to work it out till the end.
Read more
Report abuse

Joan Thompson
5.0 out of 5 stars A Good Read
Reviewed in Australia on December 27, 2016
Verified Purchase
This was fun to read, especially the details about the Chelsea Flower Show. I look foward to more of this series
Read more
Report abuse

Kindle Customer
4.0 out of 5 stars Flower Show
Reviewed in Canada on August 5, 2016
Verified Purchase
Another good Pru and Kit adventure and very exciting time at the Chelsea Flower Show. What will they be up to next?
Read more
Report abuse

Good Customer
5.0 out of 5 stars A wonderful story
Reviewed in Canada on June 29, 2019
Verified Purchase
I love this series
Read more
Report abuse
See all reviews