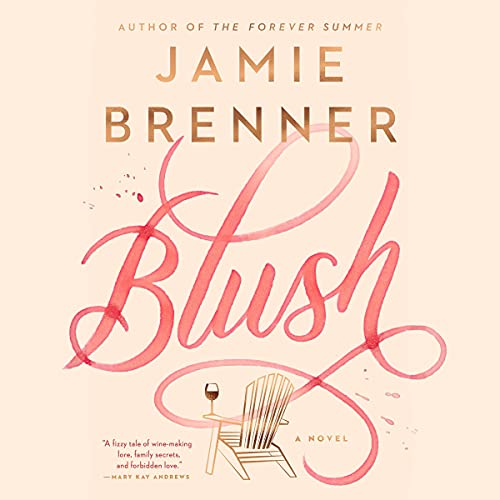 From acclaimed author Jamie Brenner comes a stunning new novel about three generations of women who discover that the scandalous books of their past may just be the key to saving their family's future.

For decades, the Hollander Estates winery has been the premier destination for lavish parties and romantic day trips on the North Fork of Long Island. But behind the lush vineyards and majestic estate house, the Hollander family fortunes have suffered and the threat of a sale brings old wounds to the surface. For matriarch Vivian, she fears that this summer season could be their last - and that selling their winery to strangers could expose a dark secret she's harbored for decades. Meanwhile, her daughter, Leah, who was turned away from the business years ago, finds her marriage at a crossroads and returns home for a sorely needed escape. And granddaughter Sadie, grappling with a crisis of her own, runs to the vineyard looking for inspiration.

But when Sadie uncovers journals from Vivian's old book club dedicated to scandalous novels of decades past, she realizes that this might be the distraction they all need. Reviving the "trashy" book club, the Hollander women find that the stories hold the key to their fight not only for the vineyard, but for the life and love they've wanted all along.

Blush is a bighearted story of love, family, and second chances, and an ode to the blockbuster novels that have shaped generations of women.

4.3 out of 5 stars
4.3 out of 5
641 global ratings
How are ratings calculated?
To calculate the overall star rating and percentage breakdown by star, we don’t use a simple average. Instead, our system considers things like how recent a review is and if the reviewer bought the item on Amazon. It also analyzes reviews to verify trustworthiness.

Candace E Kalish
1.0 out of 5 stars Crummy little dust bunny of a book
Reviewed in the United States on September 4, 2021
Verified Purchase
I know that I shouldn't take this silly example of chick-lit seriously enough to write a review, but someone needs to speak up for all that is right and true about wine, about women, about Judith Krantz! For those thinking about whiling away a half hour on this book, let me provide some background. The heroine was forced out of the family winery by her sexist father who believed that women had no place in the world of wine. So far, so good; everyone loves a villain, and Leonard, the Pig-headed Patriarch, fills the bill nicely. Our heroine, Leah, settles for second best by opening a cheese shop in NYC. Years later, she triumphs when Dad's idiocy pushes the winery into bankruptcy, and Leah saves the day. And how does she save the day? Through women's book clubs and rose. A bizarre subplot involves Leah's emotionally stunted daughter discovering the campy wonders of Shirley Conran, Jackie Collins, and Judith Krantz and turning them into the subject of her undergraduate thesis.

Did the author choose to pander to every ridiculous cliche about women as a deliberate marketing strategy? I strongly suspect instead that the novel reflects the author's complete lack of knowledge of the subject matter as well as a lot of internalized misogyny.

Let's get down to details. Leah, supposedly a smart businesswoman, opens a cheese store that sells only blues. Need I say more about that the realistic consequences of that choice? Next, she ends the family's production of high quality chardonnay, cabernet franc, cabernet sauvignon, and viognier in favor of producing rose and nothing but rose. Why? Because women don't care about great wine; they just love rose. When you think about the struggles women have endured to be taken seriously as wine makers and sommeliers, when you think about their triumphs in Burgundy and Champagne, you start to realize just how insulting this crummy little dust bunny of a book is.

And as for Judith Krantz, to whom it's obvious the author would like to be compared; well at least when Krantz dropped names, she dropped the right ones. She knew, for example, that a panther themed necklace would be from Cartier, not Bulgari. She would have known that Long Island did not produce Malbec in the 1970's and 80's. She would not have had a lecherous French baron address the female object of his pursuit as "mon chere". Good God.

If you want to enjoy a piece of female centered light fiction, go back to those thrilling days of yesteryear, and read Scruples. Don't bother with Blush.
Read more
6 people found this helpful
Helpful
Report abuse

Ptown Reader
5.0 out of 5 stars A Delicate Pairing
Reviewed in the United States on June 23, 2021
Verified Purchase
"Terroir, loosely translated, means taste of a place." – Blush, by Jamie Brenner.

To be honest, I wasn't sure what to make of the blurb for this book, which said, "Three generations of women discover the "trashy novels" of a bygone era might just hold the key to saving their family's coastal winery—and to finding the love that's eluded them."

My first thought was this is a tall order fraught with pitfalls at every turn. Not knowing too much about the books in question, I wondered how the 80's romance genre could possibly inform today's feminist consciousness. In the hands of a less masterful writer, I think the premise would have failed miserably. In the capable hands of Jamie Brenner, it's a stroke of genius. Not only does she call out the sexism, violence, and male dominance in the works of Judith Krantz and Jackie Collins (among others), she mines the hidden gold within their novels.

Three generations of Hollander women have chafed against the patriarchal rule of Leonard, husband, father, and grandfather, to Vivian, Leah, and Sadie, respectively. When a trove of 1980's novels is discovered, the three women draw strength from them, resonating with the courage, intellect, drive, and passion many of the female characters possess. In time, the Hollander women come to find these same attributes within themselves. It is nearly impossible to distinguish the primogeniture of a titled English family from the standard operating procedures at Hollander Estates Vineyard. The vineyard was once a trailblazer in North Fork and has achieved national recognition and an "estates" winery designation under the stewardship of Leonard and his maladroit son and heir-apparent, Asher. Leah, who has a genuine affinity for the place, is bypassed at every turn. Devastated, she goes into business for herself, becoming an expert seller of artisanal cheeses, which, of course, also have their terroirs.

The vineyard is beset by the kind of unfortunate twists and turns that make for a great backstory. It is within this framework that Brenner shows true brilliance. She weaves a tale of opportunity, seduction, and vengeance worthy of the authors she extols and, without so much as a wink, adds a predatory French baron who just happens to own a vineyard in Bordeaux. Leonard's "old boy" approach to winemaking slowly corrodes the vineyard's many successes until all may be lost. By the time I reached this point in the story, I knew so much more about wine production and vineyard life that the very notion of the Hollanders losing their estate had me on the edge of my seat.

Hats off to Ms. Brenner for the way she balanced past and present events with elegance, equity, and touching tenderness. The range of characters, the beautiful descriptions of the mansion, and the vineyard itself add to a timeless quality that leaps off the page to create an optimal reading experience.

I read this book in one sitting. Reaching the final page, I could not help thinking how, against what I thought were heavy odds, Ms. Brenner had managed to change my perception of an entire genre. How did she do that? By pairing the past with the present and delivering a superb terroir.
Read more
7 people found this helpful
Helpful
Report abuse

Annie
2.0 out of 5 stars One-dimensional characters, for the most part.
Reviewed in the United States on July 8, 2021
Verified Purchase
The characters in this book were so cliched - especially the men, who were downright unlikable and insufferable. Also, poorly edited - flowers on a table are described as “blue ranunculas” - a shade that flower doesn’t come in. Not sure why it has so many good reviews.
Read more
7 people found this helpful
Helpful
Report abuse

Hope Tarr
5.0 out of 5 stars BLUSH is a Must-Read!
Reviewed in the United States on November 30, 2021
Verified Purchase
I always adore Jamie Brenner's books and BLUSH is her very best yet! Set in North Fork NY wine country, BLUSH interleaves the histories and current challenges of three generations of strong and striking women: vintner matriarch Vivian Hollander, her 40-something daughter Leah, a cheese shop owner, and young-adult granddaughter Sadie. As always, there is a secret from the past that bleeds through the decades, a beloved and defining family property in peril (in this case, the Hollander Estates Vineyard), and stubborn men who don't see "it" at all the same way as the wise women who ultimately find their power and ford forward, ultimately blending tradition with new approaches to family, business--and love.
Read more
One person found this helpful
Helpful
Report abuse

CA
3.0 out of 5 stars I wanted to like this book …. But
Reviewed in the United States on July 5, 2021
Verified Purchase
I have enjoyed Jamie Brenner’s previous books, but unfortunately this book just wasn’t up to their standards. I guess the author just wanted to write a book about the North Fork and wine. However, the characters in the book are fairly unlikeable, cliched and/or underdeveloped. Unfortunately, the plot just drags throughout the book. I guess I will just have to look forward to the 2022 Jamie Brenner book. This 2021 vintage was a miss for me.
Read more
One person found this helpful
Helpful
Report abuse

Mari LaBelle
4.0 out of 5 stars Don't pass this one up!
Reviewed in the United States on July 30, 2021
Verified Purchase
Surprisingly wonderful. Jamie Brenner manages to incorporate many books into this novel. And what avid reader doesn't love to read about books? An interesting story about wine, women and family.
Read more
One person found this helpful
Helpful
Report abuse
See all reviews
Back to top
Get to Know Us
Make Money with Us
Amazon Payment Products
Let Us Help You
EnglishChoose a language for shopping. United StatesChoose a country/region for shopping.
© 1996-2022, Amazon.com, Inc. or its affiliates