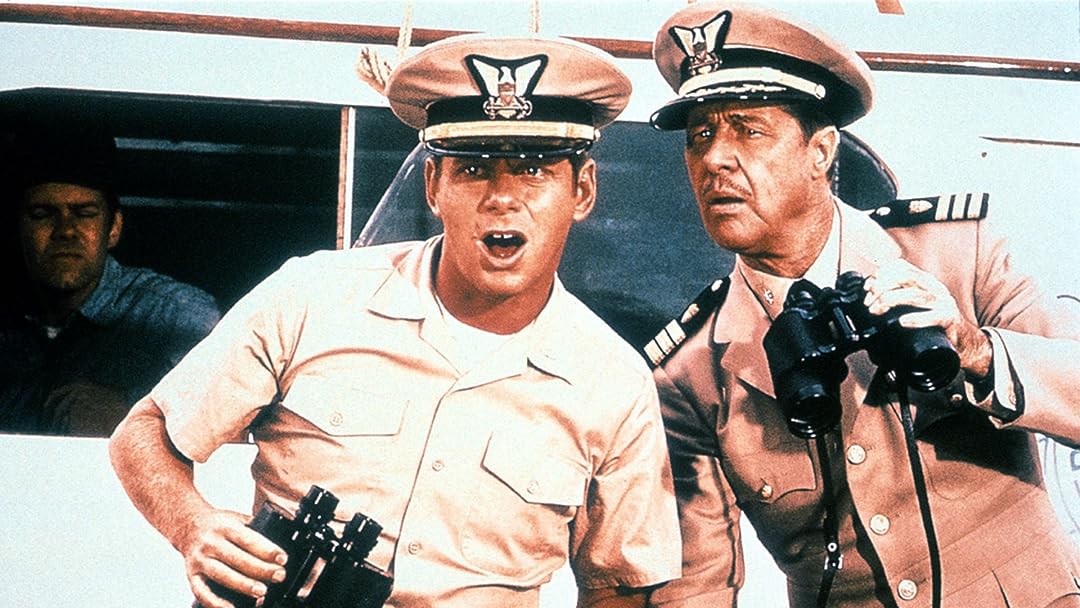 (415)
5.51 h 40 min1970G
Newly assigned to duty in the coast guard at Newport Beach, a young ensign finds himself involved in romantic complications, as well as with jewel thieves, whose antics contribute to moments of hysteria and hilarity.

Kindle CustomerReviewed in the United States on February 15, 2014
3.0 out of 5 stars
Easy to watch for the nostalgia.
Verified purchase
I remember seeing this film at a school assembly in around 1977 or 1978. It was a tradition for our little school to show a film to the whole school (usually in two separate showings) as a treat right before Christmas break. I fondly remembered the Boatniks as being hysterical and magical. Well, upon a second viewing oh so many years later, it is neither of those things. But it is fun to see many of the usual Disney actors of that period do their thing and it all adds up to innocuous fun and the kind of movie you can watch but not miss much if you are doing other things at the same time.
7 people found this helpful

microjoeReviewed in the United States on November 8, 2005
5.0 out of 5 stars
Good clean comedy
Verified purchase
STORY: A seasoned Coast Guard Lt. Jordan (Joey Forman) is transferring out of one of the craziest, most crowded recreational harbors in the US coastlines, Newport Beach Harbor, California. Robert Morse stars his bumbling new replacement, Coast Guard Ensign Thomas Garland. This wacky movie is about the trials and tribulations faced by those rescuers at sea that must save the amateur weekend boaters (beatniks) from themselves. The great Don Ameche stars as the tough area Commander who served with Garland's father, a famous Admiral, so he has high expectations of Garland Jr. On the other hand Garland feels that he is jinxed to live in his father's shadow, contributing to his bad luck. Kate (Stefanie Powers) runs a local boat rental and sailing school. After rescuing him from his own wreck, she gets romantically involved with the Ensign as they must join forces to catch some jewel thieves. Phil Silvers, Mickey Shaugnessy, and Norman Fellstar as the 3 bumbling jewel thieves on the run from the police.

BEHIND THE SCENES: The movie promotional poster at the time said, "Here comes those marina madcaps who go down to the sea every weekend ...down, and down, and down, and down, and down". This movie is simply loaded with visual sight gags and slapstick comedy. During the opening credits alone there are 4 funny mishaps and rescues. Bob Haskins as Chief Walsh. Chiyoko Kuni as the Japanese geisha, Joe Flynn, Wally Cox, Tom Lowell, Vito Scotti, Sammy Jackson, Joe Ross, Judy Jordan, Al Lewis. Kelly Thordson is the police officer on a motorcycle, a role he played in 5 Disney films. Many of the actors appeared in other Disney comedies of the period.
Directed by Norman Tokar, who directed 15 films and TV movies for Disney Studios, from 1961 until his untimely death in 1979. His titles include "The Cat from Outer Space", "The Horse in the Grey Flannel Suit", "The Ugly Dachshund", "Rascal", and "The Apple Dumpling Gang". Screenplay by Arthur Julian and Marty Roth. The studio filmed extensively on location at Newport Beach in California and its marina, in addition to shooting scenes at the Disney studio backlot, soundstages, and in a water tank to simulate the sea. Many stuntmen were used in the multiple scenes of boats that capsized.
First released to theatres on July 1, 1970, and it was well received by the drive-in movie crowd, who were going to see surf and bikini movies. Even dads who sometimes shunned family movies wanted to see the boating hi-jinks, as boating was a popular fad at the time. Disney studio composer Robert Brunner worked with Bruce Belland to co-write the title song. 100 minutes in length. Aired on the "Wonderful World of Disney" TV show in a 2 hour special format on November 12, 1978 and again on June 2, 1991. Released to video for the first time in 1984.
Rated "G" for Good clean fun for the whole family.

nsmelserReviewed in the United States on August 15, 2016
3.0 out of 5 stars
A pleasant romp
Verified purchase
A cute, pleasant romp, although certainly not one of the great Disney classics. Still, it's easy on the eyes and brain, gives more than a few chuckles, and has a summer vibe that features some California coastal scenery. More than anything, it has that early 1960's charm that Disney films from this era all seemed to share in varying degrees. It's entertaining for the whole family, and just clean, silly fun!
3 people found this helpful

Wanetha RickardReviewed in the United States on June 8, 2021
5.0 out of 5 stars
Mad Cap adventure with Disney
Verified purchase
Love this old Disney movie. Haven't seen it in years! Maybe not as funny as others but right up there with them. Glad to have it as part of my Disney library.

Sherrydon TurnerReviewed in the United States on May 30, 2020
5.0 out of 5 stars
This is still a funny movie!
Verified purchase
I love this movie! The disc and case are great shape and there were no problems playing the movie. It's a great movie for the family and it's still as funny, as it was when I watched it alot of years ago! I still love the older Disney movies!

Tempting FortuneReviewed in the United States on February 20, 2021
5.0 out of 5 stars
Love Disney
Verified purchase
Im a Disney fan, rember it from my childhood. Still a funny movie. Recommend this product to all my friends who love the Disney movies.

Amazon CustomerReviewed in the United States on July 19, 2020
5.0 out of 5 stars
Like these classic disney movies.
Verified purchase
My boatniks dvd arrived in great condition, thank you!

leslie fineReviewed in the United States on March 13, 2019
3.0 out of 5 stars
Cute film
Verified purchase
Cute. I bought it to see Stefanie Powers and she never disappoints me. Film was cute but nothing great.
See all reviews
Back to top
Get to Know Us
Make Money with Us
Amazon Payment Products
Let Us Help You
EnglishChoose a language for shopping. United StatesChoose a country/region for shopping.
© 1996-2022, Amazon.com, Inc. or its affiliates