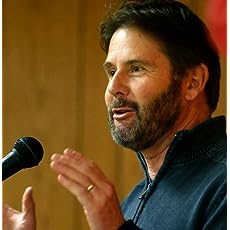 Bob Welch is an award-winning columnist, speaker and author whose 15 books are distinguished by heart, humor and hope. As head of Pebble in the Water Inspiration, Welch has keynoted conferences across America. "Forget the hyperbole," said Julie Zander, organizer of the Association of Personal Historians conference in Portland. "Our 261 participants scored Welch a 4.81 on a 5.0-scale."

A storyteller by nature, Welch mines much of his speaking fodder from his books and the nearly 2,000 columns he's written for The Register-Guard, Oregon's second-largest newspaper. He has twice won the National Society of Newspaper Columnists's highest award for writing. In addition, he has won dozens of other journalism awards, including the 2010 and 2011 Oregon Newspaper Publishers Association's "Best Writing" awards. He's also the winner of the Seattle Times C.B. Blethen Award for Distinguished Feature Writing.

A previous book about a heroic World War II nurse, "American Nightingale" (Atria Books, 2004), was featured on ABC's "Good Morning America" and was a finalist for the Oregon Book Award.

Articles of Welch's have been published in more than a dozen books, including seven in the popular "Chicken Soup for the Soul" series.

In addition, he has had articles published in such magazines a s"Los Angeles Times," "Reader's Digest," "Sports Illustrated" and "Runner's World."

In 2005, Welch founded the Beachside Writers Workshop in the Oregon coast town of Yachats. Since then, nearly 1,000 students have attended the workshops.

He and his wife, Sally, live in Eugene.
Read more 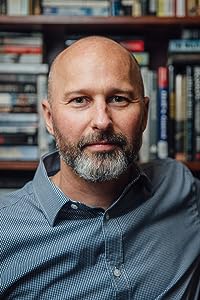 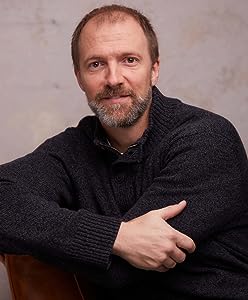 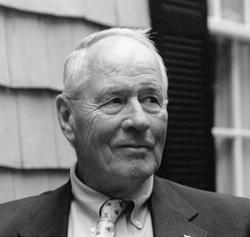 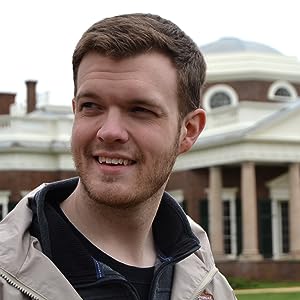 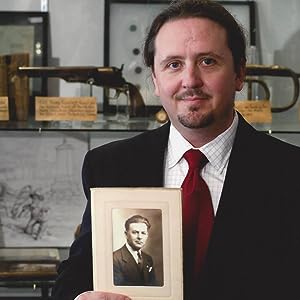 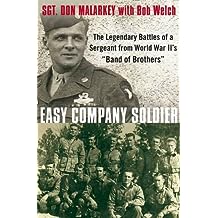 Elite paratrooper Sgt. Don Malarkey takes us not only into the World War II battles fought from Normandy to Germany, but into the heart and mind of a soldier who lost his best friend during the nightmarish engagement at Bastogne.

Drafted in 1942, Malarkey arrived at Camp Toccoa in Georgia and was one of the one in six soldiers who earned their Eagle wings. He went to England in 1943 to provide cover on the ground for the largest amphibious military attack in history: Operation Overlord. In the darkness of D-day morning, Malarkey parachuted into France and within days was awarded a Bronze Star for his heroism in battle. He fought for twenty-three days in Normandy, nearly eighty in Holland, thirty-nine in Bastogne, and nearly thirty more in and near Haugenau, France, and the Ruhr pocket in Germany.

Easy Company Soldier is his dramatic tale of those bloody days fighting his way from the shores of France to the heartland of Germany, and the epic story of how an adventurous kid from Oregon became a leader of men. 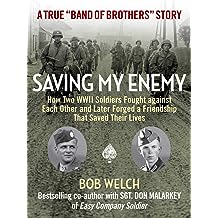 Saving My Enemy: How Two WWII Soldiers Fought Against Each Other and Later Forged a Friendship That Saved Their Lives Apr 27, 2021
by Bob Welch
$14.99
“A quintessential tale. Once read, never to be forgotten.” —Erik Jendersen, lead writer of Band of Brothers on HBO

Saving My Enemy is a “Band of Brothers” sequel like no other.

Fritz Engelbert’s German boyhood couldn’t have been more different. Regimented and indoctrinated by the Hitler Youth, he was introspective and a loner.

Both men fought in the Battle of the Bulge, the horrific climax of World War II in Europe. A paratrooper in the U.S. Army, Malarkey served a longer continuous stretch on the bloody front lines than any man in Easy Company. Engelbert, though he never killed an enemy soldier, spent decades wracked by guilt over his participation in the Nazi war effort.

On the sixtieth anniversary of the start of the Battle of the Bulge, these two survivors met. Malarkey was a celebrity, having been featured in the HBO miniseries Band of Brothers, while Engelbert had passed the years in the obscurity of a remote German village.

But both men were still scarred— haunted—by nightmares of war. And finally, after they met, they were able to save each other’s lives.

Saving My Enemy is the unforgettable true story of two soldiers on opposing sides who became brothers in arms.
Read more
Other Formats: Audible Audiobook , Hardcover 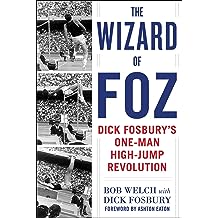 The Wizard of Foz: Dick Fosbury's One-Man High-Jump Revolution Sep 4, 2018
by Bob Welch , Ashton Eaton
( 60 )
$16.99
Track and Field Writers of America's 2018 Book of the Year!
In 1968, a US Olympic men’s track and field team—America’s best ever—stirred the world in unprecedented ways, among them the victory stand black rights protest by Tommy Smith and John Carlos at the Games in Mexico City. But in competition, no single athlete captured the ’60s more perfectly than Dick Fosbury, a failed Oregon prep high jumper who—in the wake of his little brother being killed by a drunk driver while the two were riding bikes and the subsequent divorce of his parents—invented a high jump style as a high school sophomore that ultimately won him an Olympic gold medal and revolutionized the event. No jumpers today use any other style than his.

The Wizard of Foz is a story of innovation and imagination that blossoms 7,350 feet up in the High Sierra, where boulders and 100-foot trees festoon the interior of the Olympic Trials track. It is a story of loss, survival, and triumph, entwined in a person—Fosbury—and a time—the ’60s—clearly made for each other. And it is a story of a young man who refused to listen to those who laughed at him, those who doubted him, and those who tried to make him into someone he wasn’t.

“My experience working with Skyhorse is always a positive collaboration. The editors are first-rate professionals, and my books receive top-shelf treatment. I truly appreciate our working relationship and hope it continues for years to come.”
–David Fischer, author
Read more
Other Formats: Hardcover 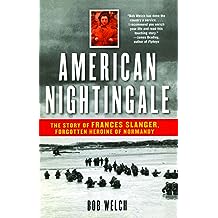 American Nightingale: The Story of Frances Slanger, Forgotten Heroine of Normandy Jun 30, 2008
by Bob Welch
( 60 )
$14.99
Of the 350,000 American women in uniform during World War II, none instilled more hope in American GIs than Frances Slanger. In Army fatigues and helmet she splashed ashore with the first nurses to hit the Normandy beach in June 1944. Later, from a storm-whipped tent amid the thud of artillery shells, she wrote a letter to Stars and Stripes newspaper that would stir the souls of thousands of weary soldiers. Hundreds wrote heartfelt responses, praising Slanger and her fellow nurses and honoring her humility and patriotism. But Frances Slanger never got to read such praise. She was dead, killed the very next day when German troops shelled her field hospital, the first American nurse to die in Europe after the landing at Normandy.
Frances Slanger was a Jewish fruit-peddler's daughter who survived a chilling childhood in World War I-torn Poland and immigrated to America at age seven. Inspired by memories of her bitter past and a Nazi-threatened future, she defied her parents' wishes by becoming a nurse and joining the military. A woman of great integrity and courage, she was also a passionate writer and keeper of chapbooks. This is the story of her too brief life.
Read more
Other Formats: Hardcover , Paperback 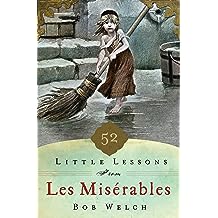 Gold Medallion Award-winner Bob Welch crafts 52 nuggets of Bible-based wisdom from one of the most popular novels, musicals, and films of all time: Les Misérables.

In 52 Little Lessons from Les Misérables, Bob Welch walks readers through Hugo’s masterpiece, extracting dozens of uniquely spiritual reflections from this enduring portrait of poverty, social injustice, mercy, and redemption. Welch reminds us that Jean Valjean’s life provides the truest example of why real love is found in the grittiest places, and that hearts are made whole beneath the crush of mercy. Most important, though, Welch keeps returning to the intersections of faith and reality throughout Hugo’s writing—those places where mercy becomes an inroad to the heart, and where love is only truly received when it is given without condition.

Discover again why life’s purpose is found not in attending to personal needs and desires, but in responding to the hearts of others. 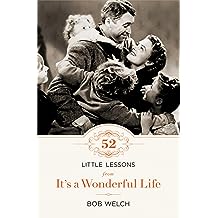 Do you pay a visit to Bedford Falls every Christmas? Does December feel incomplete without a reminder that “no man is a failure who has friends”? If George and Mary Bailey are annual guests at your home during the holidays, you already know that It’s A Wonderful Life is far more than just a festive seasonal film. It’s a reflection of what we can be when we’re at our best and a reminder that our lives can change everyone around us—for better or worse. Revisit the defining lessons in Frank Capra’s 1946 classic, and discover new dimensions of the film you’ve seen time and again. What can you learn from Mary’s quiet contentedness? Does George’s selflessness make you rethink your own priorities? And how about Clarence’s dogged commitment to his assignment? Join author Bob Welch for a close-up of the characters and themes that shape this beautiful story. You’ll be reminded that life’s most important work is often the work we never planned to do and that God can use the most unlikely among us to get the job done. 52 Little Lessons from It’s a Wonderful Life will inspire you to live for the deeper stuff that, as George Bailey finds, matters most. 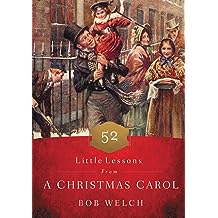 Gold Medallion Award-winner Bob Welch crafts 52 nuggets of Bible-based wisdom from one of the most popular novels of all time, A Christmas Carol.

The lessons and stories from the beloved novel A Christmas Carol point to bedrock values we all share. Award-winning author Bob Welch takes readers deeper into the nuances of this classic by Charles Dickens. From the miserliness of Scrooge to the innocence of Tiny Tim, 52 Little Lessons from A Christmas Carol will inspire readers to live for what really matters, not only at Christmas, but all year long. 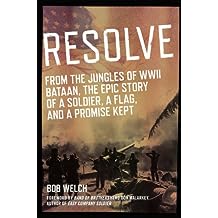 Resolve: From the Jungles of WW II Bataan,The Epic Story of a Soldier, a Flag, and a Prom ise Kept Nov 6, 2012
by Bob Welch
( 104 )
$7.99
On April 9, 1942, thousands of U.S. soldiers surrendered as the Philippines island of Luzon fell to the Japanese. But a few hundred Americans placed their faith in their own hands and headed for the jungles.

One of them was twenty-three-year-old Clay Conner Jr., who had never even camped before . . .

The obstacles to Conner’s survival were as numerous as the enemy soldiers who ultimately put a price on his head: among them malaria, heat, jungle rot, snakes, and mosquitoes. Beyond that, the human threats of betrayal, capture, torture, and death. And, finally, he had to overcome self-doubt, struggle with the despair of burying comrades, deal with friction among his fellow American soldiers, and find a way to survive.

But if conflict reveals character, Conner showed himself to be a man apart. Inspired by an unlikely alliance with a tribe of arrow-shooting pygmies, by the words in a dog-eared New Testament, and by a tattered American flag that he vowed to someday triumphantly fly at battalion headquarters, Conner emerged victorious from the jungle—after almost three years.

Resolve is the story of an unlikely hero who never surrendered to the enemy—and of a soldier who never gave up hope.
Read more
Other Formats: Hardcover , Paperback 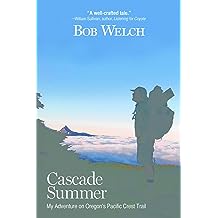 Cascade Summer: My Adventure on Oregon's Pacific Crest Trail Feb 1, 2013
by Bob Welch
( 39 )
$9.99
Cascade Summer is the story of Bob Welch’s 2011 attempt, along with his brother-in-law, to hike the 452-mile length of Oregon’s mountainous spine. To reconnect with his past. And to better understand 19th-century Cascade Range advocate John Waldo, the state’s answer to California naturalist John Muir. Despite great expectations, near trail’s end Welch finds himself facing an unlikely challenge. Laughs. Blisters. And new friends from literally around the world—his PCT adventure offered it all. But he never foresaw its bittersweet ending
Read more
Other Formats: Paperback