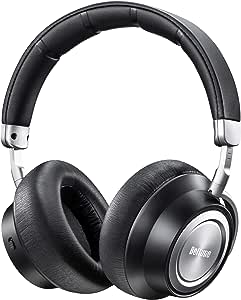 Stable Bluetooth 5. 0 connection streams music uninterrupted while the built-in cVc 6. 0 microphone ensure crisp, clear calls without ambient noise. The effective range of BT-BH011 wireless headphone is up to 66ft, four times longer than other Bluetooth 4. 2 headphones for an unbridled experience.

Boltune wireless headphones are equipped with the latest noise cancelling technology ( QCC3003+AMS3415 ), put them on, turn on the ANC and you’re transported into your own personal tranquil retreat. Just you & the music. Upgraded for 2019, these noise cancelling headphones offer you impressive sound quality with an unbeatably affordable budget.

Noise OFF, Music ON.

4.6 out of 5 stars
4.6 out of 5
729 customer ratings
How does Amazon calculate star ratings?
Amazon calculates a product’s star ratings based on a machine learned model instead of a raw data average. The model takes into account factors including the age of a rating, whether the ratings are from verified purchasers, and factors that establish reviewer trustworthiness.

michigan1777
4.0 out of 5 stars Decent Headphones for the Price (Compared to the Sony wh1000xm3)
Reviewed in the United States on September 2, 2019
Verified Purchase
Let me say, for the price, you cannot go wrong with these. I automatically knock half a star off these though because they do NOT support USB-C. There isn't an excuse anymore. If you don't have it in 2019, you lose a star. They sound decent, a bit warmer with a slight mid bass/mid boost. Vocals are clean and crisp. However, compared to my Sony wh1000xm3 (300 dollars), there are a few features you won't find.

1. (FEATURES):
The headphones app from Sony allows alot more customization, including eq adjusters, ambient noise, noise cancelling strength, and frequent software updates. These Boltunes are what you get out of the box. No updates, just this. These could use some eq tweaks in my opinion, but for 89 dollars, it's fine. Most people will be happy.

2. (SOUND) These have a deep rolloff at about 33hz. It's good for mid bass music and from my listening, rock, jazz, electronic, metal, and a few others, I found the sound to be decent, with a somewhat boxxy bass. They have clear vocals, but don't have that higher end detail I prefer. The Sony's trail off at 20hz. 13hz doesn't sound like much but you get far more and cleaner bass on the Sony's, and all around they sound cleaner and flatter. For movies the Sony's crush these, but for music, it's closer. For vocals I did enjoy the Boltunes alot. If you come from the Bose qc series, these share a similar sound.

3. (BUTTONS) the Boltunes have a physical volume up and down button, as well as a physical power and noise cancelling button. The buttons work well. The power button works as a pause and play button, but double tapping it is DANGEROUS. These headphones automatically dials the last number in my phone log when double tapping the power button on Android. This is extremely dangerous being that the last number could be spam or someone you don't know. They lose one half star here. The Sony's use touch controls that include jestures that are responsive and work extremely well. I much prefer them to this older feeling system from Boltune. Once again though, for the price, the Boltunes should be fine for average consumers.

4. (NOISE CANCELLING) Sony blows these away and it isn't even close. If I were to put noise cancelling into a rating of 1 to 10, Sony would have a 10 (industry leader) to the Boltunes 5. There is so much more noise cancellation on the Sony's in the bass and higher levels than you'll find on these. I find the Boltunes still let in air conditioner, light fan noise. The Sony's just are all around better and the headphones have pressure sensors for frequent fliers. I would put the Boltunes on the same level as Senheissers nc headphones, however they're below the windows headphones, the Sony wh1000xm2 and 3, the Bose qc35-2s and the new Bose headphones. Once again though, for the price these are fine. But for top of the line noise cancelling, Sony and bose are the top easily.

5. (COMFORT) these are somewhat comfortable but do not look very good on big heads. The band stretches alot, making them alot rounder and protrusive than the sonys. They have good build quality all around though, and the earcups are decent. They are a bit thick though and I noticed my ears warmed up in an hour with these as oppose to the 3 or 4 on the sonys. The ear cups on these are too round and need to be more ear shaped/thinned down. They definitely don't feel like memory foam. But they still don't put any unnecessary pressure on my head anywhere. The band is made from aluminum or steel so it feels great. The rest of the body is plastic. The Sony is the same, but Sony provides a much lighter headset. For the price, these are great though, but Sony and bose are still better.

6. (PORTABILITY) these Boltunes do NOT fold like the sonys do, so the case is larger and bulkier. The case itself is a hard feaux leather that is a finger print magnet. It works, and comes with a micro USB and 3.5 mm Jack. It's still above average for the price though, and I have to give them credit for that.

8. (BLUETOOTH CODECS) Boltunes: SBC... yeah that's it. No apt x, no aac, no apt x hd, no ldac... Just SBC. The Sony's have every Bluetooth codec on the market. To be fair though, the Bose qc35ii only have sbc, so I won't knock them for this. Still, after having better CODECS, you notice alot more compression .

Conclusion: if you are a casual person who doesn't fly alot and wants a decent pair of headphones with decent sound, get these. I would rank them above average overall. However, they don't touch the Sonys in terms of sound quality, features, noise cancelling, or comfort. However for 89 bucks, that may not matter. These fall in a great price range, but they do sacrifice alot. Overall 4/5 stars.

They are packaged very nicely, secured in a sturdy zipped case that I would have no problem trusting in my luggage squished in with other things. They included a nice gold plated connection cable, a USB charging cable (no charger) with micro USB charging plug, a airline adapter (have only had to use once in years), and the manuals. Setup was quick...hold the power button, hear the "power on" voice, and connected to Bluetooth on my phone. At first the music was bass heavy and I tried a variety of tunes, from pop to country to electronica, and couldn't hear the clarity of instruments especially in country music where everything is typically real instruments recorded in studio. A quick check of my music app settings revealed that it defaulted to a very bass heavy 3d stereo mode. Turning off enhancents entirely revealed a much more pleasing balance right out of the box. Not bad! With the large drivers, usually headphones like this are too bass heavy. All music was now much more well balanced. I tested the sound quality with and without noise cancellation, and was happy to hear almost zero degradation in quality when using the noise cancellation. Overall sound quality gets a 4, because it requires equalizer tweaking to make it right, mostly cranking higher vocals and upper frequencies. The bass and mid ranges are very well balanced, and the bass doesn't boom unless you push those frequencies in an equalizer.

I stood near an air vent with my house air conditioning running, and the vent noise went to completely nothing. Literally, nothing! Stood in the bathroom under the vent fan in there, about a normal noise level you would expect from such a fan, and would estimate a 75%+ reduction. That probably mimics airplane noise a lot better too, so I would put these up there amount the best sub-$100 noise cancelling headphones.

The ear pads are soft and comfortable, though perhaps a little thin. Time will tell how well they hold up. It's not obvious how easy or difficult they will be to replace when that time comes. The pad covering was just a little out of place on one part initially, but that appears to probably just been some packaging pressure because after wearing them for awhile, I can barely find the part of the cover that looked a little off. Nice!
Read more

Sidharth
5.0 out of 5 stars Noise canceling headphones on a budget!
Reviewed in the United States on August 22, 2019
Verified Purchase
I bought this headphone to use in my office. I am pleasantly surprised by how well the noise canceling works! My office is in an older building and they are renovating parts of the building, so lots of hammering, drilling and sawing noises - but they come as a lower hum as they are on other floors - noise canceling on this completely cuts that out, plus also things like low-frequency noises from ac ducts, pc fans, etc. It gets quite QUIET.. lol. So much so that a couple of times I dozed off on my desk after lunch! Other than that the sound quality is great. I own both the legendary Audio Technica ATH-M50x and it's open back cousin - the ATH-AD700X.
Sound quality is quite similar to the m50x, but with deeper bass. The ear cups nicely enclose the ears and the leather is soft so as not to apply pressure. I wear glasses which is no problem, with the soft earcups not putting pressure in that area. I do admit I have an above-average head size, so the headphone is stretched to its max extension, and could do with a couple of more notches of extension. I usually use it the afternoons after lunch so usually keep them on for 3-4 hours. I charged them at the beginning of the week and had charge till the end of the week - so 5 days of work and 4-5 hours usage every day with noise canceling on, seems close to the claimed 30-hour battery life.
Bottom line - this is an excellent noise-canceling headphone for the price and perfectly suits my needs. It's amazing that at this price point, such great headphones are built and sold.
Read more