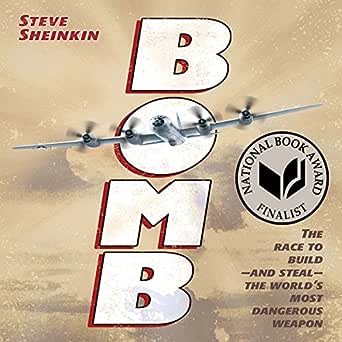 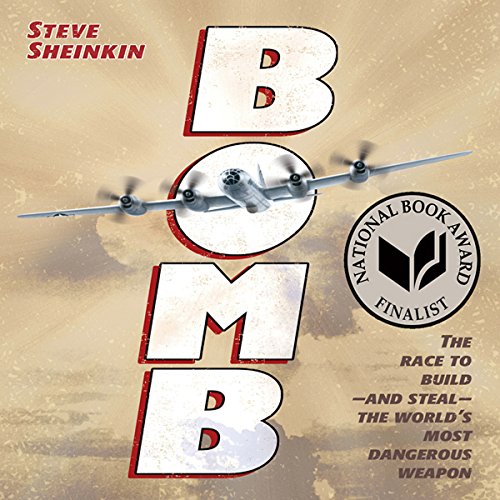 Bomb: The Race to Build - and Steal - the World's Most Dangerous Weapon

4.7 out of 5 stars
4.7 out of 5
417 customer ratings
How does Amazon calculate star ratings?
Amazon calculates a product’s star ratings based on a machine learned model instead of a raw data average. The model takes into account factors including the age of a rating, whether the ratings are from verified purchasers, and factors that establish reviewer trustworthiness.

Lee Boyland, award wining author
5.0 out of 5 stars An accurate account of America’s greatest triumph
Reviewed in the United States on December 14, 2014
Verified Purchase
BOMB was mentioned in a review of another book and I decided to order a hardback edition. When it arrived and I opened the package my first thought after looking at the cover, was, this is either going to be a very good, or a very bad book. I was delighted to discover it was a very good book.

Having been involved with the nuclear weapons program with a high security clearance, assigned to the Defense Atomic Support Agency, Field Command at Sandia Base, Albuquerque, NM, and a person who has researched the Manhattan Project, later using my knowledge to write my first novel based upon the Soviet version of the Manhattan Project (the Soviet program has several names), I was delighted by the author’s attention to detail, ability to explain the program in an understandable and interesting manner, and his historical and technical accuracy.

The Manhattan Project was in the 1940s the greatest engineering, scientific and manufacturing effort in the history of mankind. A program that made America the first real superpower, and something all Americans should be proud of.

I will add a couple of facts the author may not have known. The Little Boy dropped on Hiroshima had a yield of 12-13 kilotons, not 20KT. The reason was pre-detonation, the fission reaction began as the U-235 “projectile” entered the U-235 “target rings,” reducing the yield.

The Soviets detonated a 50 megaton weapon (the yield may have been greater) know as “Tsar Bomba” and the bomb detonated was scaled down from the designed yield of 100MT.

The Soviet ability to penetrate the Manhattan Project illustrates how difficult it is to keep secrets—something true then and still true today.

Written for school children, BOMB is a book anyone interested in American history, and the history of the Manhattan Project will enjoy.

BOMB is an easy, insightful read, and I highly recommend it.

Allears
5.0 out of 5 stars History comes ALIVE for our youngster !
Reviewed in the United States on December 4, 2017
Verified Purchase
Our 8 year-old loves to read about many topics including history, science and technology; physics,
and the elements and chemistry. (Like a lot of kids his age, he also likes the Wimpy Kid Series.) "Bomb" really makes history come ALIVE for him. Some of the Landmark Series books -- which go back to 1951 -- did the same for him. (I read them as kid and they did the same for me.) Our youngster also loves similar Landmark Series history books like "Bomb". Such as: "The Monitor and the Merrimack"; "The Sinking of the Bismarck"; and "The Story of Submarines".Available at Amazon. Link: https://www.amazon.com/s/ref=nb_sb_noss?url=search alias%3Dstripbooks&fieldkeywords=landmark+series+history+books&rh=n%3A283155%2Ck%3Alandmark+series+history+books
Read more
7 people found this helpful
Helpful
Comment Report abuse

B. Perry
5.0 out of 5 stars Simplistic sentences, excellent writing
Reviewed in the United States on March 29, 2019
Verified Purchase
The stories are geared towards a younger audience, so the sentence structure and vocabulary may feel a little simplistic. The subject matter is treated very maturely and it is very well researched. Excellent stories and plenty of footnotes to find more information on any one topic. A quick read that's thoroughly engrossing.
Read more
3 people found this helpful
Helpful
Comment Report abuse

Thomas Anstett
4.0 out of 5 stars Bombs Away for Sheinkin
Reviewed in the United States on September 12, 2013
Verified Purchase
Bomb: The Race to Build - and steal - the World's Most Dangerous Weapon supplies some necessary history for teen readers primarily, yet any adult who has had the misfortune of spending periods of time under desks in grade school during air raid drills on Tuesday mornings will benefit from this read. The author does his research, moves the book at an appropriate speed, and weaves the names and events so that any lapses in reader interest are avoided. The book is written for young readers - nothing wrong with that - considering how ignorant present young people are about culture changing events. Pick up a copy: you can finish it in a couple of days and feel like you learned something about the dawn of the nuclear age.
Read more
15 people found this helpful
Helpful
Comment Report abuse

Hello
5.0 out of 5 stars Good book
Reviewed in the United States on October 12, 2019
Verified Purchase
Richard Rhoads is the "man" when it comes to telling the complete story of the A-Bomb. but if you want a faster paced story that is accurate, grabs your interest and is easy to follow, this book is for you. Overall an excellent read.
Read more
Helpful
Comment Report abuse

AWright
5.0 out of 5 stars Excellent overview of Atomic weapon development
Reviewed in the United States on March 1, 2014
Verified Purchase
When a friend recommended this Young Adult book, I was a bit skeptical because it was a YA. However, I loved it so much I've recommended it to dozens of friends and family members. It is an excellent overview of the Manhattan Project and really gives great insight into the people involved, the scientific breakthroughs, the moral questions, and the spying that surrounded the whole process. In fact, the author does a great job hooking the reader by beginning with the spy activity at Los Alamos. I've read hundreds of WWII books, so I was surprised how well this covers the key points without getting bogged down in the science, politics, biographies, etc. Highly recommended for ANY AGE.
Read more
5 people found this helpful
Helpful
Comment Report abuse

cc5449
5.0 out of 5 stars You'll be glad you read it!
Reviewed in the United States on December 30, 2015
Verified Purchase
I am in eighth grade and I think this book describes both the race to develop and use the atomic bomb perfectly. The main plot is about the discovery of fission and the making of the first atomic bomb and the ones that followed. It is also about the race between America, the Soviet Union, and Germany to finish constructing the atomic bomb as soon as possible in order to use it if there is a possible or definite threat from the other country or countries. The book is well written and is also full of suspense. The main characters in the novel are Robert Oppenheimer (a physicist who was in charge of the making of the first atomic bomb), Leslie Groves (an army general who was in charge of the entire Manhattan Project), Klaus Fuchs (a physicist who ended up spying for the Soviet Union), and Harry Gold (a chemist from Philadelphia who betrayed his country by giving top-secret information to the Soviets.) The main locations the novel takes place in are America, Japan, and Northern, Central, and Eastern Europe. The subplots talk about the scientists and physicists who were involved in the making of the atomic bomb and the ones who were also spies or were not spies but were accused of being a spy. The subplots also talk about the different locations where each bomb was tested. I would recommend this book to anyone who is interested in American history or physics (science.)
Read more
6 people found this helpful
Helpful
Comment Report abuse
See all reviews from the United States

A. D. Dyer
5.0 out of 5 stars A great read for father and son
Reviewed in the United Kingdom on January 18, 2014
Verified Purchase
Bought as Xmas present for grandson - but his father got to it first to read. Both enjoyed it hugely
Read more
Helpful
Sending feedback...
Thank you for your feedback.
Sorry, we failed to record your vote. Please try again
Report abuse

vadimuk
4.0 out of 5 stars Great historical book
Reviewed in the United Kingdom on February 13, 2013
Verified Purchase
It's quite easy to read this book - great collection of historical stories that have one common subject - raise for atomic bomb.
Read more
Helpful
Sending feedback...
Thank you for your feedback.
Sorry, we failed to record your vote. Please try again
Report abuse

Lara y Jesús
4.0 out of 5 stars The race to create the deadly weapon that would win the war
Reviewed in Spain on September 1, 2019
Verified Purchase
I really enjoyed the way the novel is written. I like that even though its a very scientific matter, it's balanced out by the adventurous spy stories. Reading this book I learned about nuclear weapons and their effects, the life of spies, important historical events and the division of the world into two groups.
Although this isn't the type of book I usually read, I must say I found it very entertaining, informative and I would definitely recommend it.
Read more
Helpful
Sending feedback...
Thank you for your feedback.
Sorry, we failed to record your vote. Please try again
Report abuse

Carlos Alberto Wilson Perez
5.0 out of 5 stars Amazing
Reviewed in Mexico on September 13, 2019
Verified Purchase
This book gives you a new perspective about how American secrets were stolen (and continue to be) at the hands of leftists and naive scientists, finally aiding dangerous foreign enemies...
Read more
Helpful
Sending feedback...
Thank you for your feedback.
Sorry, we failed to record your vote. Please try again
Report abuse
Load more international reviews

Robert H.
5.0 out of 5 stars Great book!
Reviewed in Canada on March 24, 2019
Verified Purchase
Bought it for my 10 year old aviation/World war II buff. He loved it!! Have since read other books by the same author.
Read more
Helpful
Sending feedback...
Thank you for your feedback.
Sorry, we failed to record your vote. Please try again
Report abuse

Canadianbeaver1234
5.0 out of 5 stars Very gud buk
Reviewed in Canada on June 22, 2015
Verified Purchase
Bomb - the book has been my Favourite book ever after Percy Jackson and the Olympians. I love how there was the tragic story of english gliders who died in the mountains, how scientists gather up scientists around the country, and definitely the compete between 3 countries( not to forget the spies!)...
Read more
Helpful
Sending feedback...
Thank you for your feedback.
Sorry, we failed to record your vote. Please try again
Report abuse

えいすけ
5.0 out of 5 stars 情報リークの大罪
Reviewed in Japan on May 6, 2015
Verified Purchase
核兵器がここまで世界に拡散した原因は、アメリカの情報管理の甘さがあった。
画期的な発明をする者は、情報管理を徹底するという責任も負わなければならない。
Read more
Helpful
Sending feedback...
Thank you for your feedback.
Sorry, we failed to record your vote. Please try again
Report abuse
Translate review to English