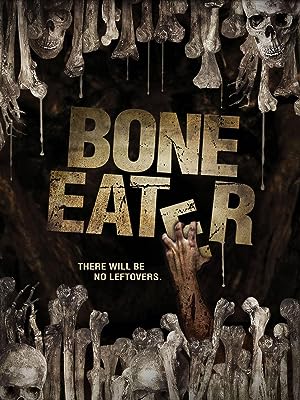 (78)
2.91 h 28 min2008PG-13
A trio of construction workers break ground on what is said to be Indian holy ground. They discover an ancient artifact and remove it from the earth, unleashing an evil spirit known as the Bone Eater. With every victim, the Bone Eater grows more powerful. Sheriff Evans and his daughter seek the help of a wise Indian girl to uncover the secret before it's too late!

Della blountReviewed in the United States on April 6, 2021
1.0 out of 5 stars
My expectations were already incredibly low
Verified purchase
I already knew this wasn't going to be that great, but WOW, what a piece of junk. I thought it'd be a B-movie that's so bad it's sort of fun to watch. But it's neither. It's not even a good C-movie (ie: made-for-TV). Now, I understand this is a shoestring budget sort of arrangement, so I won't comment too much on the crappy SFX. That stuff is expensive and this film obviously didn't have much in the way of funds. But my GOD there are ways to do it that aren't cheap and dumb.

The use of the old stereotype of "wise and knowing savages" was done so poorly that it came off as a caricature. That sort of stereotype is way out of style these days, but it can still be done with some . . . flair? Dignity?

The rest of the acting was terrible, too. The plot is cliched and all the more glaringly so because of how poorly everything else is done.

Skip this one. Manos: Hands of Fate is at least as good as Bone Eater, which should tell you all you need to know.

B. ChandlerReviewed in the United States on September 21, 2020
2.0 out of 5 stars
A venue for out of work over the hill TV actors and a cameo of a Treckie.
Verified purchase
If you believe that they found King Richard III, under a parking lot in Leicester, then you can believe they found the Native American giant skeleton-like creature known as Bone Eater at a construction site owned by an evil developer.

After taking all that in we ket the fun of trying to remember where we saw those actors before. It is not hard to place Walter Koenig who is older than dirt and gets a 2-minute cameo. But try William Katt (o.k. [[ASIN:B074QVZJJ1 The Man from Earth (2007))]].

Our hero Sheriff Steve Evans (Bruce Boxleitner), learns you are never too old to realize who you are. He has a Joseph Campbell experience.

Go ahead and kibitz; they will not listen. Looks like we are doomed. No bones about it.

V. GoldbergReviewed in the United States on March 3, 2020
4.0 out of 5 stars
entertaining
Verified purchase
Okay -- this was probably filmed as a horror flick; however, I found it hilarious. It has a great cast that worked with a so-so script. The special effects for the 'monster' was original. Naturally when you are dealing with a made for TV movie you will have the mandatory cardboard characters chewing up the scenario with strung together one-liners. You could almost play one-line bingo with this movie. I kid you not. There are 2 in particular that I would have loved to truss up together and staked out for the 'monster'. I am wondering if in 20 some years if this will be one of those odd-ball cult classics. Altogether this was an interesting flick.

Wille DayReviewed in the United States on August 11, 2019
2.0 out of 5 stars
Not a horror movie
Verified purchase
Good story that devolved into the fantastic and story elements that didn't appear on camera. No helicopter, no shadow passing over the ground to suggest a helicopter, no engine noise; no injuries shown of the deputy's hand nor to his face after plummeting over a cliff, or any other injuries if he was thrown from the truck. No grimace from Bruce Boxleitner when he saw the deputy's boneless hand. Doctor say's " I've never seen anything like it." Neither did we.
4 people found this helpful

D. WilliamsReviewed in the United States on October 10, 2019
4.0 out of 5 stars
Hey I liked it!
Verified purchase
Hey, this was a Sci-Fi channel movie back in the days when they actually did movies that weren't about flying sharks or zombies, or changed their name to some stupid anagram, all of which I hate. Which means it was a good, entertaining movie with monsters that nobody would believes exists when they're told about it. A good old-fashioned supernatural creature with a very unique ability. I love it!
3 people found this helpful

VaperCaperReviewed in the United States on July 25, 2019
2.0 out of 5 stars
No gore, blood, or bone crushing...
Verified purchase
The CGI is ok, and the bone horse was too. Unfortunately the movie falls way short with most aspects of a good horror flick. Story was ok, however drags between events. Killings are all the exact same type of kill, using a gas or touch by the creature, resulting in a person turning to dust.
Very unimpressive. Disappointing and a waste of time.
3 people found this helpful

Linda LeeReviewed in the United States on May 18, 2020
5.0 out of 5 stars
Nuckelavee vs Indian legend of relic bad Indians
Verified purchase
This has been a good American Indian version of the horrific Scottish demon known as the Nuckelavee.

Jasmin SmithReviewed in the United States on August 9, 2019
4.0 out of 5 stars
Deserves 3.5 stars. I rounded up.
Verified purchase
Lots of stars. Better than I thought it would be. Good entertainment.
One person found this helpful
See all reviews
Back to top
Get to Know Us
Make Money with Us
Amazon Payment Products
Let Us Help You
EnglishChoose a language for shopping. United StatesChoose a country/region for shopping.
© 1996-2022, Amazon.com, Inc. or its affiliates