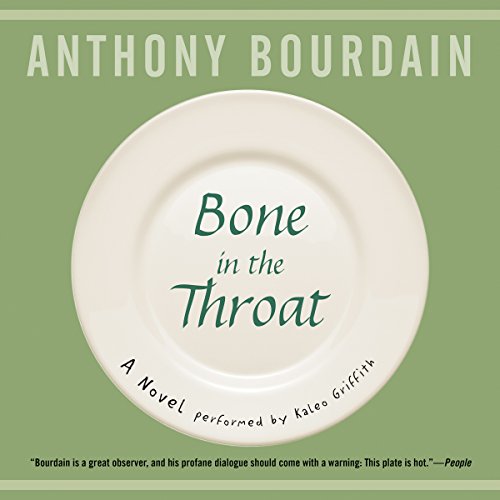 Bone in the Throat

A wildly funny, irreverent tale of murder, mayhem, and the mob.

When up-and-coming chef Tommy Pagana settles for a less than glamorous stint at his uncle's restaurant in Manhattan's Little Italy, he unwittingly finds himself a partner in big-time crime. And when the mob decides to use the kitchen for a murder, nothing Tommy learned in cooking school has prepared him for what happens next. With the FBI on one side and his eccentric wise guy superiors on the other, Tommy has to struggle to do right by his conscience and avoid getting killed in the meantime....

Stuffed with charming characters and peppered with Bourdain's wry humor, Bone in the Throat is one satisfying feast of a novel.

Special invitation from Audible!
Learn more about Membership
List Price: $28.51
You Save: $1.52 (5%)
By completing your purchase, you agree to Audible’s Conditions Of Use
Sold and delivered by Audible, an Amazon company
Share

4.5 out of 5 stars
4.5 out of 5
560 global ratings
How are ratings calculated?
To calculate the overall star rating and percentage breakdown by star, we don’t use a simple average. Instead, our system considers things like how recent a review is and if the reviewer bought the item on Amazon. It also analyzes reviews to verify trustworthiness.

RAREBIRD
4.0 out of 5 stars Hilarious, Raunchy Read
Reviewed in the United States on July 21, 2021
Verified Purchase
Truly enjoyed this book -- good "smash and grab" story telling of typical mob activities in New York City. Being from NYC and Long Island, I can truly identify with what the great Mr. Bourdain wrote. So appreciate that Mr. Bourdain shared his awesome writing talents with us. Looking forward to reading "Gone Bamboo". Sorry I took so long to write this review, but things kept getting in the way of reading books I purchased from Amazon several months ago. Thank you!
Read more
3 people found this helpful
Helpful
Report abuse

Biggest Fan
5.0 out of 5 stars The Best of the Bourdain novels
Reviewed in the United States on March 20, 2021
Verified Purchase
I love 'em all -- and you should read all of Bourdain's witty, smart, sharp little novels. But this one really has the best of his styling all wrapped up. The atmosphere, the food, the violence, and most of all the humor –– of a culture perched between appreciating the great and glorious sensuality of life, while not appreciating life, itself.
Read more
5 people found this helpful
Helpful
Report abuse

Kenton
4.0 out of 5 stars Buy the book !
Reviewed in the United States on July 13, 2021
Verified Purchase
First off I Love Tony and I forgot this fiction attempt until recent. Came across it and had to buy it. The story is solid and you have to hand it to the talented Bourdain as he used his kitchen skills into a mob mystery. But ..sorry yes there’s a but , he really did not need to describe who’s talking at the end of each conversational sentence “did he do it ? “Said John. “Yes he did” said Sally. This goes on on every page at almost every line….this I found annoying and maybe the publisher is to blame or maybe it’s just me.
Read the book A great story. I miss you Tony, Thanks for doing this.
Read more
2 people found this helpful
Helpful
Report abuse

Kindle Customer
4.0 out of 5 stars F****in' Fun
Reviewed in the United States on June 15, 2018
Verified Purchase
This is a fun, albeit violent and raunchy, fast-paced romp of a story. I'm glad I read Bourdain's Kitchen Confidential first because I had already looked up most of the restaurant jargon that fills this book. The only caveat is that easily 1/3 of the word count consists of "f***in' this, f***in' that." I suppose the author was going for authenticity, but I could have done with fewer expletives.
Read more
9 people found this helpful
Helpful
Report abuse

Lenora G.
5.0 out of 5 stars Got Bones?
Reviewed in the United States on January 27, 2013
Verified Purchase
Bone in the Throat -by Anthony Bourdain

Murder mysteries are not my usual genre when I reach for fiction; however, I'd just finished reading Kitchen Confidential and enjoyed it, so added Bone in the Throat to my Kindle. While it's not the story I would have given to my Sunday School Teacher as a child, it is a story I'd have shared with my Drill Instructor.

This is his first novel and I think he did a pretty good job. It's set in a mobbed up restaurant in New York City. The language is a tad rough for the genteel set, but perfect for the story. I gave it 4 stars more for the publisher than the author. When it was translated from paper to electrons, a lot of formatting was lost, quotation marks dropped, the symbol for the British Pound found it's way into the story as a double, lower case 'l', nothing serious, but enough times (once is too much) to be irritating and cost points - for the publisher, not the author!

Tommy is the sous-chef at the Dreadnought Restaurant. His dad disappeared when he was a kid (assumed mob hit) and his uncle, a wannabee Wise Guy, takes him under his wing and helps his sister, Tommy's mother, raise him. Tommy wants nothing to do with the mob or his uncle, he wants to be a chef, and avoids his uncle as much as possible. But Uncle Sal is, after all, family. And then Uncle Sal needs Tommy to do a favor for him, payback for the help, a simple favor that won't get him in trouble or cause him grief. Yeah. Right.

Tommy and his drugged out boss, the Chef, are now caught in the midst of an FBI operation, drug rehab and threats, Mob mentality, and, well, for a fun read, pick up the book. As stated above, this book does not fall into my usual fiction genre, and until I finished the last chapter, I wasn't sure I'd pick up another Bourdain novel, but I will.

Oh, and if you don't recognize at least one of the Mob Guys, you need to read or watch more news!

s
4.0 out of 5 stars So good. Didn't expect such quality fiction
Reviewed in the United States on September 19, 2018
Verified Purchase
Enjoyed the book so much. Mob characters had the ring of truth, restaurant and most all of it's cast of characters clearly true to life. Story wove Anthony Bourdains experience in the restaurant biz very well into the story, tongue in cheek, surprising what happens when organized crime and other nebulous character get involved. I don't understand why Anthony Bourdain expressed a feeling of being a fiction writer. I thought the book was great. RIP Anthony Bourdain.
Read more
2 people found this helpful
Helpful
Report abuse

Kindle Customer
4.0 out of 5 stars Bloody Rare
Reviewed in the United States on January 14, 2012
Verified Purchase
I normally would never think of picking up a novel written by a tv show host, but I have a lot of respect for Anthony Bourdain and enjoy his non-fiction pieces, so I thought I'd give it a whirl. I'm glad I did. It's rare enough to find a multi-talented artist, but that's exactly what Bourdain is proving himself to be. Add fiction writing to his growing repertoire of skills.
"Bone in the Throat" is a divertingly fun romp through Tony's New York--dark, gritty, often desperate, but with a distinctive hint of macabre humor that fans of "No Reservations" or "A Cook's Tour" will easily recognize. Bourdain pulls no punches here, giving us the good and the bad with equal honesty. His detailed descriptions of artfully prepared meals and the simple joy of cooking are interspersed with the harsh truth of a junkie's struggle to get clean, and both strike the reader as likewise realistic, a testament to Bourdain's own experiences as well as his talent at bringing both words and food to life.
The largest problem with this book is the lack of careful editing, an issue that's cropped up in a number of Kindle editions. Simple grammatical and spelling errors distract a reader at the worst possible moments. Don't let this alone stop you, though. Bourdain's writing is plenty strong to relegate the editing issues to nothing more that a nuisance.
Fans of "Kitchen Confidential," as well as Bourdain's Travel Channel shows will thoroughly enjoy this book, and readers of Carl Hiassen and Elmore Leonard ought to check it out as well.
Read more
9 people found this helpful
Helpful
Report abuse

R. P. Whiteman
5.0 out of 5 stars Very good book by one of my Heroes
Reviewed in the United States on August 27, 2018
Verified Purchase
Preferred the first book. But still a good read. So sad he's no longer with us. Been a culinary hero since I read his first book. What a man and what a legacy. If you haven't read Kitchen Confidential read it NOW! RIP Anthony Bourdain.
Read more
4 people found this helpful
Helpful
Report abuse
See all reviews

nevillek
4.0 out of 5 stars Great fun, especially for food lovers and those who work(ed) in restaurants.
Reviewed in the United Kingdom on February 2, 2016
Verified Purchase
I'm a big fan of Anthony Bourdain, and this novel is a lot of fun. The main character - an Italian American souschef whose family has links to the Mafia - is likable, and the supporting cast is believable. The story runs along nicely, and Bourdain explains in passing how the restaurant business really works. It's a little dated - written in the 1990s - but a good read nonetheless.
Read more
One person found this helpful
Report abuse

Kirsty gibson
5.0 out of 5 stars Great holiday red
Reviewed in the United Kingdom on August 21, 2019
Verified Purchase
Entertaining, believable story with a realistic picture of the life of a chef and addict. Food takes the starring role.
Read more
Report abuse

Davethedog
4.0 out of 5 stars Another great read from the master chef.
Reviewed in the United Kingdom on September 4, 2014
Verified Purchase
Another great book by Bourdain but lost a star because he went off at a tangent and did 1 and half pages of some recipe half way through the book for no apparent reason!! Strange. It's pretty dark and not quite as humorous as the cover reviews suggest.

Jooles
5.0 out of 5 stars What a great read!!
Reviewed in the United Kingdom on March 6, 2019
Verified Purchase
Bordain a legend , great book .
Read more
Report abuse
See all reviews
Back to top
Get to Know Us
Make Money with Us
Amazon Payment Products
Let Us Help You
EnglishChoose a language for shopping. United StatesChoose a country/region for shopping.
© 1996-2021, Amazon.com, Inc. or its affiliates