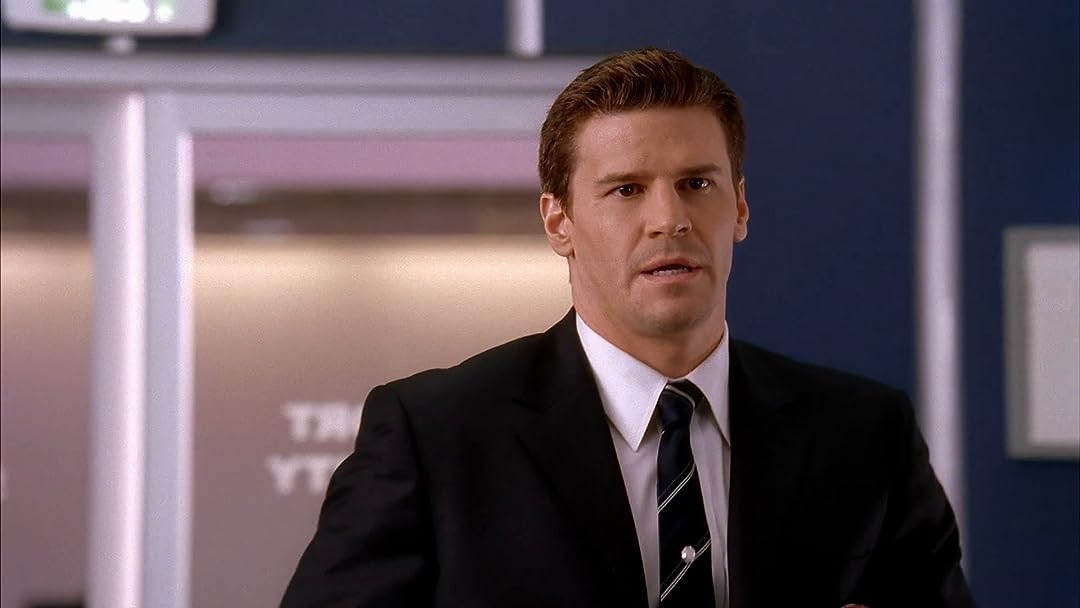 (1,864)
7.82006X-RayTV-14
When the standard methods of identifying a body simply won't work, law enforcement turns to Dr. Temperance Brennan, a skilled forensic anthropologist with an uncanny ability to read clues left behind in a victim's bones.

JEROME W, MARTINReviewed in the United States on July 2, 2013
5.0 out of 5 stars
Season 1: BONES, BOOTH & BODILY TALES
Verified purchase
Season one is what I call the pilot season for one of the best TV programs ever to be put on the air. It is superbly produced with fine sets, excel. photography, sci-fi story lines,
brilliant cast and humor galore that should keep many a folk happy. The choice of Emily Deschanel who I had never heard of before (I knew of her equally beautiful sister Zooey) as Dr Temperance
(Bones) Brennan along with David B. (can't spell his name!)was a brilliant bit of casting. She is a great actress whether she is a humanitarian or a self-centered bitch. And she is so
beautiful to watch. Angela and Hogkins along with Mr Goodman are also great choices. The first two seasons I call "pristine" because they set the table for Bones & Booth to become identifiable
personages and develop their personalities. Their interplay & bickering remind me much of Ron Weasley & Hermminie interplay in the HARRY POTTER series which of course I purchased in the entirety
from AMAZON. Also reminds me of Capt. Kirk & Spock relationships. Some of the sexual blather bothers me a bit for a prime time show but I guess that's the way things are today. Never-the-less
I give five stars to this season and the rest of the seasons to FOX for the superb overall production quality of the films. Nice goody gore touches also!
Note to FOX: for future seasons from 9 on, bring back Zach, dump the moron Dr Sweets and give more time to Bones, Booth, Angela, Hogkins & Cammile: love them all!

B. MaroldReviewed in the United States on August 18, 2013
5.0 out of 5 stars
As good as the second season.
Verified purchase
In watching the first season, I was reminded that many of my favorite episodes are from the first and second seasons. The opening (Pilot) episode is especially good. The first five minutes are worth the price of admission, when Booth arranges to have Brennan detained by homeland security at the Washington airport, just so he can stage a rescue for her. The plan backfires when Brennan flips the officer who tries to detain her on the airport floor.

There are two or three more incidents like that in later episodes. Even better is when Brennan brandishes a huge silver revolver, which I can only guess is a 357 Magnum, but without the long barrel on Harry Callahan's revolver. Another stand-out episode is when the whole gang is trapped in the lab when it is shut down by a quarantine, over Christmas. A third is a late episode starring Adam Baldwin in his classic "loose cannon" kind of role which began in "Full Metal Jacket" and "Firefly."

I actually rather like the role of Dr. Daniel Goodman as "the Boss" in place of Camille Saroyan, who replaces him in season 2, because she becomes, after about half a dozen episodes, not much more that "one of the guys" as Brennan reclaims her role as alpha dog (she is even above the "king of the lab" game between Zack and Hodgins).

The one thing I noticed is that within that one season, Booth and Brennan got so close that Season 2 seemed to be dedicated to putting some distance between them. I also like the character of Sam Cullen, Booth's boss, who brings a sense of reality to the fact that sometimes Booth seems like he can do anything he wants, without FBI management and direction. He and his family play an especially poignant role in this season's episode 20.
20 people found this helpful

Real WestReviewed in the United States on March 20, 2018
2.0 out of 5 stars
DOES NOT MEASURE UP to Kathy Reichs' Temperance Brennan novels.
Verified purchase
In marked contrast to the eminently readable, well-told, entertaining Tempe Brennan whodunit novels, season 1 of the Bones TV series comes across as a fantasy-based dark sitcom, developed and presented as an appealing diversion for the beta-wave brigade.
The Temperance “Tempe” Brennan I came to know from reading Kathy Reichs’ series of novels is vastly different from the Temperance “Bones” Brennan portrayed by Emily Deschanel in the TV series. The ink on paper Tempe Brennan appears to be an intelligent scientist somewhat lacking in social graces, appearing a notch or two on the pretty side of plain. On the flipside, based upon viewing the first season of the Bones TV series, Temperance “Bones” Brennan is verifiably a few giant steps on the opposite side of pretty from the ink on paper Tempe Brennan. Furthermore, Emily Deschanel portrays her “Bones” Brennan character as a sometimes Asperger’s savant, a sometimes pigheadedly defiant 12-year old and, once in a while, a somewhat normal person. Fortunately, in contrast to the TV show’s “Bones” Brennan, there is a genuine girly girl series regular in the person of Angela Montenegro, portrayed brilliantly by Michaela Conklin. Kudos to the other first season core characters, FBI agent Seeley Booth (David Boreanaz), technicians Jack Hodgins (T. J. Thyne) and Zack Addy (Eric Millegan) for their comedic contributions, and to Jeffersonian head honcho and straight man Daniel Goodman (Jonathan Adams).
12 people found this helpful

MARK S.Reviewed in the United States on November 2, 2021
2.0 out of 5 stars
same problem
Verified purchase
I LIKE THE SERIES, IT'S FUN TO WATCH AND YOU CAN EXPECT BRENNEN TO PUT EVERY ONE DOWN. THE PROBLEM IS WITH THE DISC. SEASON ONE IS BAD ON BOTH THE SET I BOUGHT AND THE SINGLE SEASON I BOUGHT TO REPLACE A DISC. ONE STOPS IN THE MIDDLE OF THE EPISODE AND WON'T MOVE ON TO THE OTHER EPISODES. THIS SET OF DISCS HAVE A DIFFERENT PROBLEM. THEY TAKE A LOT OF TIME TO LOAD THE NEXT EPISODE. IF YOU BUY IT JUST EXPECT ONE OF THE DISCS TO BE MESSED UP.
One person found this helpful

KGReviewed in the United States on November 13, 2012
4.0 out of 5 stars
A well above average 'procedural'
Verified purchase
Generally I'm not a fan of procedurals (shows without a continuing story, where each episode stands on it's own and is
about 'procedure'; legal, medical, etc), but this is as close to an exception as I'll get.

Give credit to excellent writing, directing and acting, and having supporting characters that are rich and really add
something to the show. When it's at it's best this can be downright terrific, bringing me to tears more than once, and
making me laugh out loud a few times too. It's sometimes very smart.

On the other hand, it only hits that level of excellence every 5th episode or so. The rest are mostly fine, (one or two
really don't work) but often you can see the twists coming a mile off, or the jokes get a little stale (e.g. Bones' complete
lack of familiarity with common cultural references is funny... for a while).

The show is at it's best when the episodes are really about the inner lives of our running characters, and not simply about
brilliantly (and inevitably) catching the bad guy/gal. Or when it's dealing with the more human side of forensics - the grief
and pain of those left behind. That's when the show moves way beyond 'clever crime of the week' status.
3 people found this helpful

neryzaraReviewed in the United States on November 17, 2019
5.0 out of 5 stars
Just what I wanted.
Verified purchase
Great customer service, the seller was responsive when I placed the order and asked to change my shipping address. The videos are literally all in Spanish, exactly what I wanted! I love this show and want my mom to watch it but she’s a Spanish speaker only and none of the Bones DVDs in the U.S. have the Spanish audio available, so I knew I’d have to get an international version one in Spanish like this one to be able to play it for my mom. Haven’t had any issues with the DVDs :)
One person found this helpful

CatRabbReviewed in the United States on October 3, 2009
5.0 out of 5 stars
Comedy, Drama, and great character development
Verified purchase
Be warned, this is not just another crime show. This is not a procedural drama, more of a character drama that adds humor and a twist to the "who-did-it question." Special Agent Booth (David Boreaneaz from Angel) and Dr. Brennen (Glory Road, Cold Mountain) have a wonderful working relationship matching his street smarts and her book smarts to make a formidable team in solving crimes. She uses her "squint sqaud" - a group of genius scientists and an artist - to figure out who the victim is, how and when they died, and give Booth and the FBI the means to figure out who the killer is and why they killed. And just when you think you have figured out who the killer is, surprise!, it's someone else. The comedy exists in Brennen's (Bones) lack of pop culture references and Booth's constant attempts to teach her.

If you're looking for a crime drama that adds a touch of humor, keeps you guessing as to who the real killer is and has strong character development, look no further than BONES. I do highly recommend that you watch these shows in order the first time you watch them. References in season 2 shows depend on you seeing season one episodes. I highly recommend BONES.
2 people found this helpful
See all reviews
Back to top
Get to Know Us
Make Money with Us
Amazon Payment Products
Let Us Help You
EnglishChoose a language for shopping. United StatesChoose a country/region for shopping.
© 1996-2022, Amazon.com, Inc. or its affiliates