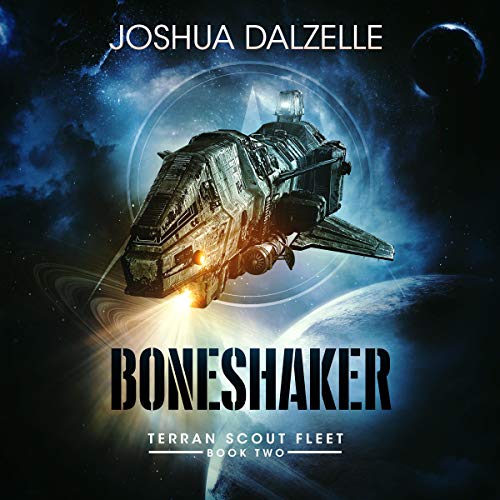 Joshua Dalzelle (Author, Publisher), Paul Heitsch (Narrator)
4.6 out of 5 stars 1,422 ratings
See all formats and editions
Sorry, there was a problem loading this page. Try again.

For months he's been sitting around on an alien planet, waiting for command to recall his scout team so they could rest and be re-outfitted. The team went through hell during their previous mission, losing both their commanding officer and their ship. For now, Jacob was acting CO of Scout Team Obsidian and their ship was a broken down old surplus combat shuttle they'd stolen from narco-smugglers on a planet called Niceen-3.

When command finally does reach out, however, it isn't to order Obsidian home for some much needed r&r. Instead, they are being reactivated and sent out into the contested space of the recently conquered Eshquarian Empire to track down a single Terran cruiser called the Eagle's Talon.

The Talon's captain has gone rogue and is operating within a fleet of ships bent on open rebellion against the quadrant's only remaining superpower. If that ship is discovered within the rebel fleet, Earth will bear the brunt of the ConFed's reprisal. Jacob's team is in a race against time to locate the missing ship and her rogue captain so that a Navy strike force can swoop in and reclaim her...or destroy her.

4.6 out of 5 stars
4.6 out of 5
1,422 global ratings
How are ratings calculated?
To calculate the overall star rating and percentage breakdown by star, we don’t use a simple average. Instead, our system considers things like how recent a review is and if the reviewer bought the item on Amazon. It also analyzes reviews to verify trustworthiness.
Top reviews

M Grant
5.0 out of 5 stars Doesn't disappoint...
Reviewed in the United States on April 5, 2020
Verified Purchase
Was excitedly amped when I got the notification that this book was released the other day and bought it without question this morning. Just finished reading it and am now mad at myself that I dont have the follow on to continue the story. Joshua Dalzelle, as usual, dosent disappoint with this new story. Showcasing Jacob's development as an officer and warrior, but also showing that he's not entirely superhuman, still falliable, and responsible for his actions (especially with regard to the many moral actions and decisions that are made throughout the story, which I also find extremely ironic as I'm currently enrolled in an Ethics course for my degree, so many of the concepts/theories are vividly on display). It's obvious that the parallels of this story will collide with those of Omega Force, hopefully within the next book, and I'm anxiously waiting for it to be written. Again, Joshua Dalzelle knocks it out of the park with this story and fans of the series overall will be quite thrilled with this one as I am. Thank you Josh for keeping the series alive, well and always entertaining!!
Read more
6 people found this helpful
Helpful
Report abuse

Kindle Customer
5.0 out of 5 stars The next chaper in the Omega Force universe
Reviewed in the United States on April 9, 2020
Verified Purchase
Another entertaining story from the Omega Force universe. The Terran Scout Fleet series follows Jason Burke's son and occurs in parallel with action in the OF universe. This story picks up shortly after the events of OF11. If you haven't been following the Omega Force novels, I recommend you start with OF1. It's a great series with interesting characters and lots of action. As another reviewer pointed out, it took a few pages for me to remember where the action left off. A short recap at the beginning would be helpful. I'm encouraged that the author already has a title for the next book. Hopefully, we won't have to wait too long.
Read more
4 people found this helpful
Helpful
Report abuse

Modi
5.0 out of 5 stars It took too long...
Reviewed in the United States on April 2, 2020
Verified Purchase
Problem with long periods between sequels is that keeping oneself immersed in a series becomes difficult. So it took me about 50 pages to remember who’s who and what’s what.
But once I got that figured out, the book was great. Like all of the series, or Omega Force, or Blackfleet... so well deserved five stars, again.
Read more
5 people found this helpful
Helpful
Report abuse

L.P.
5.0 out of 5 stars Like the first OF books
Reviewed in the United States on May 5, 2020
Verified Purchase
Joshua has found his center again, this book is like the first OF books in that the details are believable and the characters are sensible. But this is his real first cliffhanger and I don't like cliffhangers, so I'm left begging for the next book. I could live with the cliffhanger if the next book came out a week later. He could have ended the book 2 chapters sooner and alluded to going after Margret, but now we're ankle-deep in this. As a rule, I've stopped watching shows or reading book series that are cliffhangers, because there are so many out there now that are finished, with happy endings. So Joshua, you better finish it.
Read more
5 people found this helpful
Helpful
Report abuse

Kindle Customer
5.0 out of 5 stars Like father like son
Reviewed in the United States on April 4, 2020
Verified Purchase
I have enjoyed the Omega series since the beginning, it become an adventure on a grand scale. Marine and now Boneshaker hew back to what Joshua Dalzelle is truly exceptional at, rich complex characters in well defined action adventure settings. How he manages to give personality to artificial constructs, I don't now. Somehow raw stock "707" slowly turns into "777" Lucky with a few deft words, a living almost breathing being you can connect with. The action is great, characters are well developed. It's all just good fun
Read more
2 people found this helpful
Helpful
Report abuse

Jim A
5.0 out of 5 stars Continues to be well written action series set in sifi environment
Reviewed in the United States on July 8, 2021
Verified Purchase
While I am mostly a fan of military space battle, high tech sifi, I got started on this series and really got into it. The writing is very good with a storyline that is sensible and doesn't drift off into the unbelievable realm. Not a lot of emphasis on tech but what is there is mostly believable, no gee wiz super weapons. Ships need fuel and supplies, and stuff breaks.
The story is a series of adventures for a marine scout team, and is more a detective story as they go on missions to track targets. The stories mesh together well. Overall an enjoyable read. Looking forward to the next adventure of Team Obsidian.
Read more
Helpful
Report abuse

Ben Graff
2.0 out of 5 stars I'm lost
Reviewed in the United States on June 19, 2020
Verified Purchase
I'm lost where this series is headed.....unless he is trying to form a human band of Omega Force. This book reads what it must be like to travel in space....void, long, dull, boring, and you hope you hit the mark when you get to where it is you are going. I'm done with this series.
Read more
2 people found this helpful
Helpful
Report abuse

Chris Watson
5.0 out of 5 stars Sci-Fi Adventure offshoot from Omega Force
Reviewed in the United States on November 11, 2020
Verified Purchase
Joshua Dalzelle is a natural storyteller. He has used the Omega Force storyline to develop the character of Jacob Brown, son of Jason Burke from the Omega Force series. Brown is young and inexperienced, but has inherited some special traits from his father that help him adapt to the world of space, aliens, intrigue and battle. Dalzelle’s books are difficult to put down once you get into the story, and this one is no exception. Enjoy!
Read more
Helpful
Report abuse
See all reviews

John Hanton
5.0 out of 5 stars Hated The Ending But Loved The Book
Reviewed in the United Kingdom on April 3, 2020
Verified Purchase
I've loved Omega Force and both books of Terran Scout Fleet... but man, that ending… worse than anycliffhanger anywhere. I WANT BOOK THREE YESTERDAY NOW.

But seriously, I loved this book... all of it. I just read it too darn quickly.
Read more
2 people found this helpful
Report abuse

Jambirge
5.0 out of 5 stars Great read
Reviewed in the United Kingdom on April 5, 2020
Verified Purchase
Another great read by Johsua Dalzelle. Whether Black Fleet, Omega Force or this new Terran Scout Fleet series I haven't read a bad book amongst them. The only problem being that the books drag me in so I cant put them down and end up reading them too quickly!
Read more
Report abuse

Derrick
5.0 out of 5 stars Could not put down
Reviewed in the United Kingdom on December 19, 2020
Verified Purchase
The way this story line through the two books developed has been marvellous and being a off shoot of Omega Force and the story lines in that series it is not surprising. Please please more soon in both series before the much anticipated crossover
Read more
Report abuse

Jamie
5.0 out of 5 stars Reckless knife edge action
Reviewed in the United Kingdom on April 7, 2020
Verified Purchase
Great read with action non stop, it is really good to have a new release from this series/universe. Good character developments with some character traits slowly building however I felt the book was short and I finished it within 1 day. I really cannot express to the author just how much of a winner he is on to here with all his characters, back stories and an endless expanse of environments, if you like the omega force series this is worth buying..... lets just hope the author finds a way of breaching the gap and churn out the adventures.
Read more
Report abuse

longjohn
5.0 out of 5 stars Another great book
Reviewed in the United Kingdom on November 9, 2021
Verified Purchase
Yet another fantastic book by Joshua Dalzelle I love the seamless story line and the carefully crafted characters. I am looking forward to the next book cheers Joshua and get writing again.
Read more
Report abuse
See all reviews
Back to top
Get to Know Us
Make Money with Us
Amazon Payment Products
Let Us Help You
EnglishChoose a language for shopping. United StatesChoose a country/region for shopping.
© 1996-2022, Amazon.com, Inc. or its affiliates