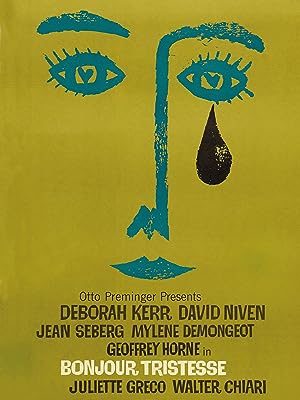 (234)
6.91 h 33 min195813+
Young Cecile (Jean Seberg) and her widower-father Raymond (David Niven) are summering in a beautiful villa on the French Riviera. They each become involved in relationships which tests their carefreeview of the world.

kaduzyReviewed in the United States on May 15, 2017
4.0 out of 5 stars
Wonderful film, rip-off foreign product.
Verified purchase
This movie is a true classic with fine performances from everyone involved, but especially from Deborah Kerr, who manages to break the heart without speaking a word in one of my all-time favorite scenes from any film. It's a good adaptation of the book and manages to remain faithful to the source material, plus it has an excellent theme song. Additionally, the film quality is excellent -- the transfer is crisp and clear. Black and white scenes don't look degraded in any way, and the full color scenes are so lush, you could practically step through your television screen. So the only reason I've given it 4 stars is that this DVD is some kind of Korean product and not a real American product. That isn't what I expected when I bought it, but seems to be all that's available for some reason. As such, it has no extra features or any of the things I'd expect from a real American studio release. If I wanted cheap Korean crap I'd go buy it on the streets of Seoul from some guy selling DVDs out of the back of a truck, not pay full price on Amazon. These types of products should not be available here.
12 people found this helpful

Nancy DrewReviewed in the United States on July 8, 2020
5.0 out of 5 stars
Very Entertaining Movie
Verified purchase
Bonjour Tristesse is (dare I say it?) a "brilliant" movie. It is an absorbing story very well told with superb performances . As for this Korean dvd, I was so happy to finally find a reasonably priced copy and there is nothing whatever wrong with it.
3 people found this helpful

Scott CoblioReviewed in the United States on June 27, 2005
5.0 out of 5 stars
Seberg: The Haunted Pixie
Verified purchase
Panned at the time of its release, "Bonjour Tristesse" stands up today as one of the more stylish and less hokey 1950's treatments of teenage angst & sexuality in changing times (it's more commercial counterpart would be the saccharine "A Summer Place" with Sandra Dee). Shot almost entirely on location at a villa on the French Riviera, director Otto Preminger's camera often encircles it subjects, follows them straight through rooms, up stairs and around porches, until you get a panoramic sense of really being there with the characters amidst the beautiful scenery. There's a sense of perpetual movement in the camerawork that makes "Bonjour" worth studying for its innovative cinematography alone.

Adding to the eye-candy factor is star Jean Seberg in her second film and second collaboration with Preminger (their first being the disastrous "Saint Joan" of the year before). Jean caught a lot of flack from skeptics who criticized her performance as "wooden" and "stilted", bedgrudging her rapid ascent to leading-lady status after having been picked from obscurity to play Joan of Arc. Preminger's "search for Joan" contest was not unlike today's "American Idol", with the instant success (and resentment) that its "winners" experience. On his TV show, Mike Wallace grilled her mercilessly about whether or not she thought she deserved to star in anything, firing accusatory statements at her like "you are a synthetic star", "your debut was a failure...what are you going to do if you fail again? What will it take for you to pack up your bags and go home?" As it happened, Jean met both Wallace's hostility and the challenges of "Bonjour Tristesse" with her customary good grace.

As Cecile, Jean adeptly essays a teenage girl, sweet of temperament but disporportionately enamored of her widowed father, played by David Niven. Cecile plots and schemes--with disastrous results--to eliminate Anne (Deborah Kerr) as the competition for his affections.

Compelling by her looks alone--dimpled and aglow with youth (and a decidedly lucky bone structure), Seberg nonetheless does more than just trade on her beauty--she carves something interesting from a character that could easily have been bland. The duplicitous Cecile, who is not quite as benign as she seems, needs just the right amount of lurking menace--more the result of immaturity than evil, and Seberg manages the balance commendably. Her inexperience shows through in spots, but as Francois Truffaut remarked of her performance, "when she is onscreen--and she is onscreen all the time--you can look at no one else." She had that cinematic attribute which trumps virtuosity; she is compelling. Ironically, it is in the easy scenes that she is weak and the histrionic ones where she shines. But she is never less than arresting, never boring, never banal. She glitters with star quality.

Co-stars David Niven and Deborah Kerr are excellent--Niven especially as the philandering but loveable father, and Mylene Demengeot as Cecile's comic girlfriend contribute much toward making "Tristesse" a funny, sad, and haunting picture. The sexual and moral (or amoral) themes are ahead of their time, perhaps influenced by the French New Wave that was just gaining momentum (and which would embrace Seberg as its female mascot after the release of Godard's "Breathless").

If you are in doubt of "Bonjour"'s ability to pack a dramatic wallop or 19 year-old Seberg's ability to render its message with depth and sensitivity--bear with it to the final shot, where Cecile, Macbeth-like, vainly tries to wash herself clean in a makeup mirror, her face a mask, betrayed only by the eyes filling slowly with tears of self-loathing for the damage she has wrought, until finally her pretty face cracks like a porcelain doll.

H. C. CruzadoReviewed in the United States on July 4, 2020
4.0 out of 5 stars
Francoise Sagan's breakthorugh novel in English and in color!
Verified purchase
The film is a good rendition of the novel which caused a big uproar in France when it was first published. David Niven and Deborah Kerr are well cast, and you can easily believe that actress Jean Seberg represents Sagan in her teens, with all the curiosities and insecurities of youth.
One person found this helpful

GimmedapReviewed in the United States on August 28, 2020
5.0 out of 5 stars
Well written book from a young french author.
Verified purchase
This book is a classic that became very popular in France when it was first written by this 18 year old author. The movie is a good adjunct to this book if you are English speaking and reading the book in French.
One person found this helpful

judy lynn brooksReviewed in the United States on July 6, 2013
5.0 out of 5 stars
A perfect film to me
Verified purchase
I absolutely love this film. The location, the story line, the acting. I have never liked Deborah Kerr and I finally remember it is because of seeing this movie when it was at the drive-in, but she is perfectly cast. The best part is that this seems to be a foreign film and yet it is in English, no subtitles and no voice overs, however you feel you are in France and not a tourist as so often happens.
Bouncing back in coulor and forward in black and white is brilliant as you will understand as the story moves forward; and a good one it is. "Hello good life. Goodbye happiness"
10 people found this helpful

Carolyn SReviewed in the United States on February 8, 2018
5.0 out of 5 stars
Why I like this movie
Verified purchase
Among my favorites because it features the 3 actors I like in roles that are theirs. because it is morally true, because it is done in back and white and in color to denote the parts of her life and because it mostly takes place on the French Riviera.
4 people found this helpful

toddowenReviewed in the United States on January 18, 2013
5.0 out of 5 stars
Is Niven in shape or what?
Verified purchase
What was he, 50 {around my current age}when he made this? The wonders that the life of a playboy with a villa on the Cote D'Azur can do.

The storyline isn't intolerable. Not a lot of dull moments. But what sells this movie for me is the scenery. {And that includes Jean Seberg dancing and starring off into the sadness of deep space}

I enjoyed this movie. I'll put it into the category of movies that I'll revisit maybe once a year or anytime I long for a vacation on the French Riviera
One person found this helpful
See all reviews
Back to top
Get to Know Us
Make Money with Us
Amazon Payment Products
Let Us Help You
EnglishChoose a language for shopping. United StatesChoose a country/region for shopping.
© 1996-2022, Amazon.com, Inc. or its affiliates