Booked (The Crossover Series) and millions of other books are available for Amazon Kindle. Learn more

Shipping rates and Return policy
$10.49
FREE Shipping
Get free shipping
Free 5-8 day shipping within the U.S. when you order $25.00 of eligible items sold or fulfilled by Amazon.
Or get 4-5 business-day shipping on this item for $5.99 . (Prices may vary for AK and HI.)
Learn more about free shipping
on orders over $25.00 shipped by Amazon.
Sold by: Amazon.com
Sold by: Amazon.com 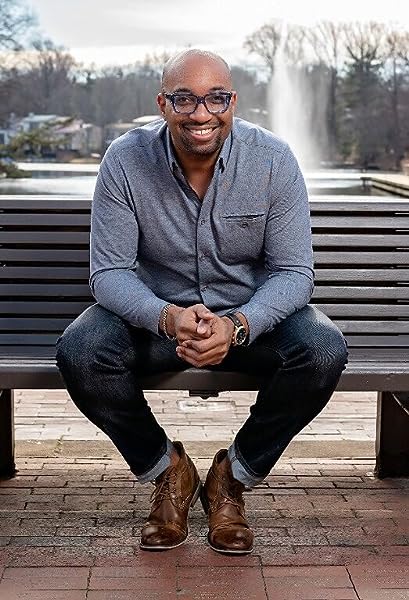 by Kwame Alexander (Author)
4.7 out of 5 stars 1,122 ratings
Book 2 of 2: The Crossover
Teachers' pick
See all formats and editions
Sorry, there was a problem loading this page. Try again.
Read more Read less
Previous page
Next page

Gr 6-10-Twelve-year-old Nick loves soccer, and he and his best friend Coby have big plans for winning the Dr. Pepper Dallas Cup, the renowned world youth soccer tournament, even though they will be playing on opposing teams. Besides the big game, Nick has a lot of other things on his mind. For one thing, his mother wants to move away to pursue her dream of training race horses, and his linguistics professor father is pressuring him to improve his vocabulary by reading the dictionary. Throw in the twin eighth-grade tyrants who relentlessly want to pound him and weekly lessons at Miss Quattlebaum's School of Ballroom Dance & Etiquette, and his life at Langston Hughes Magnet School of the Arts is pretty hectic. But school is also where "the Mac" can be found, Langston's resident rapping, dragonfly-loving, red mohawk-wearing librarian and Nick's favorite adult. And then there's April, Nick's current crush. Newbery-winning poet Alexander once again brings to life a novel in verse that equally captures the rapid-fire excitement of a soccer match and the palpable pain of a young boy whose family is falling apart. Peppered throughout are useful and amusing vocabulary words as well as wise-cracking yet sage life lessons from a beloved librarian. Authentic characters and amusing situations abound, making this story one that will be welcomed by readers of all levels. VERDICT Another winning goal for Alexander and middle school readers alike.-Carol Connor, Cincinnati Public Schools, OHα(c) Copyright 2011. Library Journals LLC, a wholly owned subsidiary of Media Source, Inc. No redistribution permitted.

"A novel about a soccer-obsessed tween boy written entirely in verse? In a word, yes.Kwame Alexander has the magic to pull off this unlikely feat, both as a poet and as a storyteller. " —The Chicago Tribune

* "Alexander skillfully juggles verse styles to realistically capture Nick's humor and smarts, passion for soccer, and vulnerability when being bullied, having surgery, or facing his parents' troubled marriage. Emotionally resonant and with a pace like a player on a breakaway..." — Publishers Weekly, STARRED review

* "Alexander understands reluctant readers deeply, and here hands them a protagonist who is himself a smart, reading-averse kid who just wants to enjoy the words that interest him on his own terms. With accessible poetic forms and engaging formatting, Booked ’s pages will be turned swiftly and enthusiastically." — Horn BookMagazine, STARRED review

"Newbery-winning poet Alexander once again brings to life a novel in verse that equally captures the rapid-fire excitement of a soccer match and the palpable pain of a young boy whose family is falling apart. Another winning goal for Alexander and middle school readers alike." —School Library Journal

"This is a fantastic book with a never-ending supply of new words like “onomatophobia” and “yobbery” that will leave readers full of new words and ideas. This is an absolute must-have for any library serving tweens." — VOYA

"A powerful story that will leave the reader breathless, right to the very end." —BookPage Children's Top Pick

Kwame Alexander is a poet, educator, and the New York Times best-selling author of more than thirty-five books, including Rebound, the follow-up to his Newbery medal–winning middle grade novel, The Crossover. Some of his other works include Booked, which was longlisted for the National Book Award, The Playbook: 52 Rules to Help You Aim, Shoot, and Score in this Game of Life, Swing, and the picture books Out of Wonder and The Undefeated, which was longlisted for the National Book Award and won the Caldecott Medal, a Newbery Honor, and the Coretta Scott King Illustrator Award.

He is a regular contributor to NPR's Morning Edition, currently serving as their poet ambassador.

He lives with his family in the UK. Visit his website at www.kwamealexander.com or find him on Twitter and Instagram @kwamealexander.
Read more
Start reading Booked (The Crossover Series) on your Kindle in under a minute.

4.7 out of 5 stars
4.7 out of 5
1,122 global ratings
How are ratings calculated?
To calculate the overall star rating and percentage breakdown by star, we don’t use a simple average. Instead, our system considers things like how recent a review is and if the reviewer bought the item on Amazon. It also analyzes reviews to verify trustworthiness.

The MoM
5.0 out of 5 stars I really got lucky because he loved the book
Reviewed in the United States on December 15, 2016
Verified Purchase
I purchased this on a whim for my 13yo summer school report, he was out of town at the time so I just had to wing it. I really got lucky because he loved the book, he read it cover to cover in just a few days, and has in the last 5 months of owning it re-read this book many times over!
After reading this book we found others by the same Author, and my teenager has been just as engaged.

Highly recommend! My 13yo is not a reader, but Kwame helped inspire him to be one.
Read more
12 people found this helpful
Helpful
Report abuse

Evangeline
5.0 out of 5 stars Linguaphiles, this is for you.
Reviewed in the United States on December 21, 2017
Verified Purchase
Another tale told in verse from Kwame Alexander! Our protagonist in someone who loves language, not unlike the author. If you like clever wordplay with a side of first crushes and teen angst, this book is for you. If you like soccer, great, but you don't have to; like The Crossover, knowledge of the featured sport is unnecessary for enjoying the plot.
Read more
6 people found this helpful
Helpful
Report abuse

Heather N. Terry
5.0 out of 5 stars Great summer reading boom!
Reviewed in the United States on September 4, 2017
Verified Purchase
My son hates reading and loves soccer. He had to read this book for Advanced English summer reading and loved it! The entire book was written in poetry form, which was able to hold his attention. I would definitely recommend this!!!
Read more
5 people found this helpful
Helpful
Report abuse

Summer Jimenez
5.0 out of 5 stars A great read, especially for teens!
Reviewed in the United States on July 15, 2019
Verified Purchase
Such an amazing book! Kwame Alexander is a very talented writer that can intertwine poetry, the complexities of family life, and can reach YA readers.

I teach 6th grade, and so many of my boys this year were obsessed with Kwame Alexander's books. They were asking each other to borrow the book after the current reader was done. For 11-12 year old boys to create their own waitlist for a book is a huge win!
Read more
One person found this helpful
Helpful
Report abuse

Jacinta Maria Carter
5.0 out of 5 stars Great for Fans of Sports, Poetry, or Both
Reviewed in the United States on November 8, 2019
Verified Purchase
While I've never been big on sports, the way Kwame Alexander writes about them always manages to pull me into the story. I love that he uses poetry to make the writing flow even better than normal prose writing could. But the best part of this book is how much the characters love words, even the characters who think they're too cool to care.
Read more
Helpful
Report abuse

John E Polger
5.0 out of 5 stars Another book "too good just for kids
Reviewed in the United States on August 13, 2016
Verified Purchase
Another book "too good just for kids!" Insightful, kind, humorous. Even better, written in kid-friendly poetry! I bought this for my grandchildren, wishing I'd had it when I was teaching seventh and eighth graders. Might need a sixth star.
Read more
4 people found this helpful
Helpful
Report abuse

Hillstreet99
5.0 out of 5 stars Great read, my son enjoyed it.
Reviewed in the United States on August 24, 2017
Verified Purchase
My son loved this book. It was more of what he enjoys reading and relevant to his nine year old experiences. My son is a sports lover and enjoys playing video games and watching TV and movies. It's a challenge to find a book that he can relate to and enjoys reading. Poetry is appealing to him and this hit the mark.
Read more
One person found this helpful
Helpful
Report abuse
See all reviews

Mand
5.0 out of 5 stars Great!
Reviewed in the United Kingdom on July 7, 2020
Verified Purchase
My Son really enjoyed this book (Yr 8) and getting him to read anything is a challenge. Have now bought the other books in the series
Read more
One person found this helpful
Report abuse

Vannessa Palmer
5.0 out of 5 stars Fabulous
Reviewed in the United Kingdom on March 2, 2018
Verified Purchase
Interesting and engaging. I read both Booked and The Crossover as part of my MA and I am so happy to have found such an inspiring author of YA Literature/ verse poetry. I hope to see this and more like it in British libraries
Read more
One person found this helpful
Report abuse

Mrs T
2.0 out of 5 stars Condition
Reviewed in the United Kingdom on April 9, 2020
Verified Purchase
I disliked the rips to the cover. I don’t call that good condition
Read more
Report abuse

Amazon Customer
5.0 out of 5 stars Loved this
Reviewed in the United Kingdom on February 18, 2018
Verified Purchase
My teen loved this book and is disappointed there is not a follow up...
Read more
One person found this helpful
Report abuse

Page 1 of 1 Start overPage 1 of 1
Previous page
Next page
Pages with related products. See and discover other items: books for young readers, red team, school journals
Back to top
Get to Know Us
Make Money with Us
Amazon Payment Products
Let Us Help You
EnglishChoose a language for shopping. United StatesChoose a country/region for shopping.
© 1996-2021, Amazon.com, Inc. or its affiliates