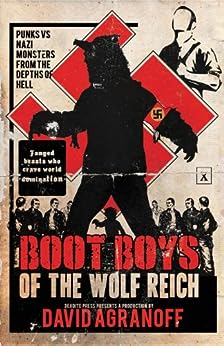 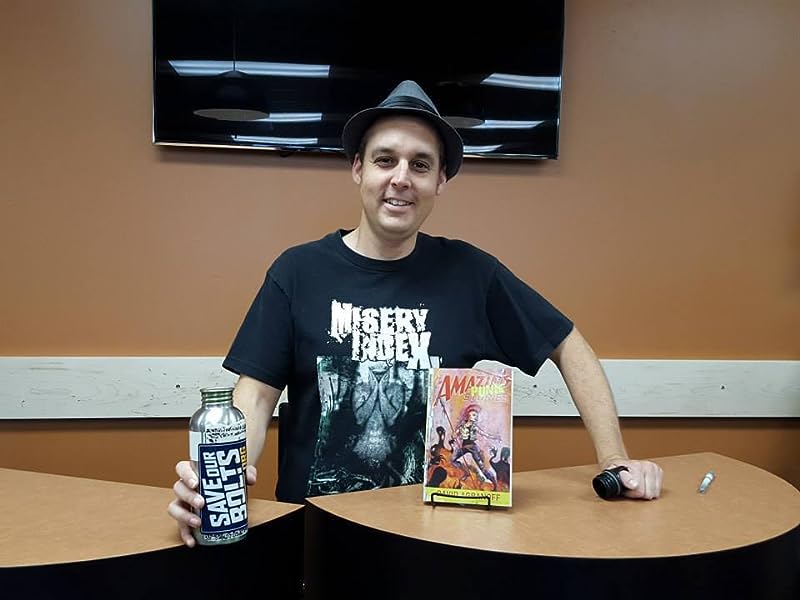 by Agranoff David (Author) Format: Kindle Edition
See all formats and editions
Sorry, there was a problem loading this page. Try again.
Paul has just moved to the big city to finish out high school, and is excited to have made friends with all the local skinheads and punks. It is the summer of 1989 and they spend their days hanging out and having fun, and their nights fighting the local neo-Nazi gangs.

Driven back and badly beaten, the local Nazi contingent finds the strangest of allies - The last survivor of a cult of Nazi werewolf assassins. A war criminal on the run, the old monster has come to America and dreams of starting a Fourth Reich. An army of neo-Nazi werewolves are just what he needs. But first, they have some payback for all those meddling Anti-racist SHARPs...

From David Agranoff, the author of The Vegan Revolution...with Zombies, comes another punk horror epic of growing up, black magic, and kicking Nazi-werewolf ass!

4.4 out of 5 stars
4.4 out of 5
6 global ratings
How are ratings calculated?
To calculate the overall star rating and percentage breakdown by star, we don’t use a simple average. Instead, our system considers things like how recent a review is and if the reviewer bought the item on Amazon. It also analyzes reviews to verify trustworthiness.
Top reviews

Ian Welke
4.0 out of 5 stars Boot Boys utilizes music brilliantly. Perfect snippets of lyrics preface each chapter and ...
Reviewed in the United States on February 20, 2015
Verified Purchase
Fast paced and vivid, Boot Boys follows two very different skinheads. Sonny is a neo-Nazi. The other, Paul, has just moved to Chicago and joins a group of skinheads that are pitted against the neo-Nazi gang. In the middle of what might otherwise be a fairly standard coming of age tale, a werewolf escaped Nazi war criminal turns the racist group of skinheads into werewolves.

For a book, Boot Boys utilizes music brilliantly. Perfect snippets of lyrics preface each chapter and the music that the characters listen to throughout underscores the action in the chapter.

I read the Kindle version, which was formatted well, but for some reason when I read on the e-reader I sometimes have difficulty keeping track of events, or in this case I initially confused a couple of key characters before realizing my mistake.

My trouble adapting to ebooks aside, Boot Boys is excellent. There’s plenty of action, solid characterization, and that soundtrack… Reading this has put me on a Descendants kick, which is always a good thing.

TheBooksofBlood
4.0 out of 5 stars Howl!
Reviewed in the United States on April 22, 2014
What an eye catching cover and impactful title this book has. Include the tagline “Punks vs Nazi Monsters From the Depths of Hell,” and it sounds like the greatest B movie ever in book form. Considering my movie taste, that’s certainly not an insult. Mentioning Nazis and wolves immediately brings to mind the Grindhouse (2007) fake movie trailer that ran in between Planet Terror and Death Proof. It was called Werewolf Women of the S.S and was loosely based on the sexploitation movie Ilsa, She Wolf of the SS. Oh, and it was awesome.

The story follows Paul, who moves to Chicago from a small town. The move means he finally gets to meet other skinheads — the kind of skinheads who enjoy punk, ska, and the anti-racist lifestyle. For the first time he is with people whose culture he holds dear, and can express himself and fit in. He makes friends, finds a girl, and finds acceptance. It’s then that things start to go wrong. Paul’s gang encounters a group of the other skinheads, the hate-filled neo-Nazi skinheads.

For the first quarter of the book, I had some trouble paying attention. There was not too much in the way of thrills and spills, apart from the opening back in World War II. After that, we mostly follow members of both gangs and look at their cultures and their day to day lives. The author clearly knows his stuff about skinheads. At the same time we are witnessing Paul’s coming of age. It’s a little bit of a chore to get through. That’s not to say that I didn’t feel invested in the Paul character, or find the insight into the skinhead culture interesting. I did, but I was hungry like the wolf (sorry) for some action. The Nazi skinhead group comes across as a bit of a caricature, spouting hate and being a bit pathetic and almost laughable. In run-ins with the other skins they continually receive a beating. When the leader of the Nazi skinheads, Tom, beats a black teen to death, the tone of the book suddenly gets much darker and is hit with a vivid realism that isn’t found throughout the rest of the book. It’s the type of action that, unfortunately, could be ripped from the headlines. It’s this hate crime that brings the gang to the attention of exiled and on the run SS officer Klaus Schroeder. At the end of the war, Schroeder fled from Germany to Argentina, but was recently forced to relocate to Chicago. Despite being an old man, he has a relic - an occult wolfskin – which can transform the skins into powerful, inhuman, wolf soldiers.

The key relationship dynamics in the book revolve around Paul, his girlfriend Tracy, and Tracy’s ex-boyfriend Sonny. Sonny used to be in the liberal skins gang but defected to the Neo-Nazis. Much of his rage is fueled by the fact that Tracy is now with Paul, when she should be his. In Sonny’s eyes, what makes things worse is that Paul is mixed race, so he sees this as an even greater slight against him. There are moments when members of the Nazi group are led to question their beliefs and wonder what all the hate is for. There is a particularly good scene where, after getting hauled in by the police, Paul finds himself locked up with a Nazi, and they have nothing to do but talk. All of the Nazi skinheads had some kind of trauma or issue that led them to seek salvation in hate.

In the second half of the book, the gore picks up as the Wolf Reich begin their reign of terror. The wolf transformation scenes are really well written, especially when the racists are first initiated. Loyalties change and the relic comes into the possession of the good skins. This allows them to level the playing field and form a wolf pack of their own. This builds to more than satisfying werewolf gang warfare. If you can imagine it, yes it’s that good. Despite some dark subject matter, it’s an entertaining read, and well worth checking out.
Read more
Helpful
Report abuse

Awesome Kindle Customer
4.0 out of 5 stars Not What I Expected
Reviewed in the United States on April 2, 2014
It was better. With the title and the synopsis I read, I was expecting a weird, off the wall type book. This was "kind of" that but in actuality it was a coming of age type book that surprised me. The backdrop, which I am not going to go into as others will do that to make their reviews look "smart" (I guess that's why we get reviews that are much longer than they should be). If you like werewolves and a little bit of history and are interested in Nazis, buy and read this book. And a kicker was parts of it took place in southern Illinois and I grew up across the great river in southeast Missouri, so we hunted werewolves in southern Illinois, or not.
Read more
Helpful
Report abuse

Adrian Shotbolt
4.0 out of 5 stars Skins v Nazi v Werewolf?
Reviewed in the United States on February 21, 2015
Agranoff clearly knows about and loves the skin movement. This Werewolf horror is really original and well put together. I enjoyed it a lot. Recommended for horror folks looking for something a little different. The music references at the start of each chapter were a great idea too.
Read more
Helpful
Report abuse
See all reviews

Adrian Shotbolt
4.0 out of 5 stars Werewolf horror done well
Reviewed in Australia on February 21, 2015
Verified Purchase
Agranoff clearly knows about and loves the skin movement. This Werewolf horror is really original and well put together. I enjoyed it a lot. Recommended for horror folks looking for something a little different.
Read more
Report abuse
See all reviews
Back to top
Get to Know Us
Make Money with Us
Amazon Payment Products
Let Us Help You
EnglishChoose a language for shopping. United StatesChoose a country/region for shopping.
© 1996-2021, Amazon.com, Inc. or its affiliates