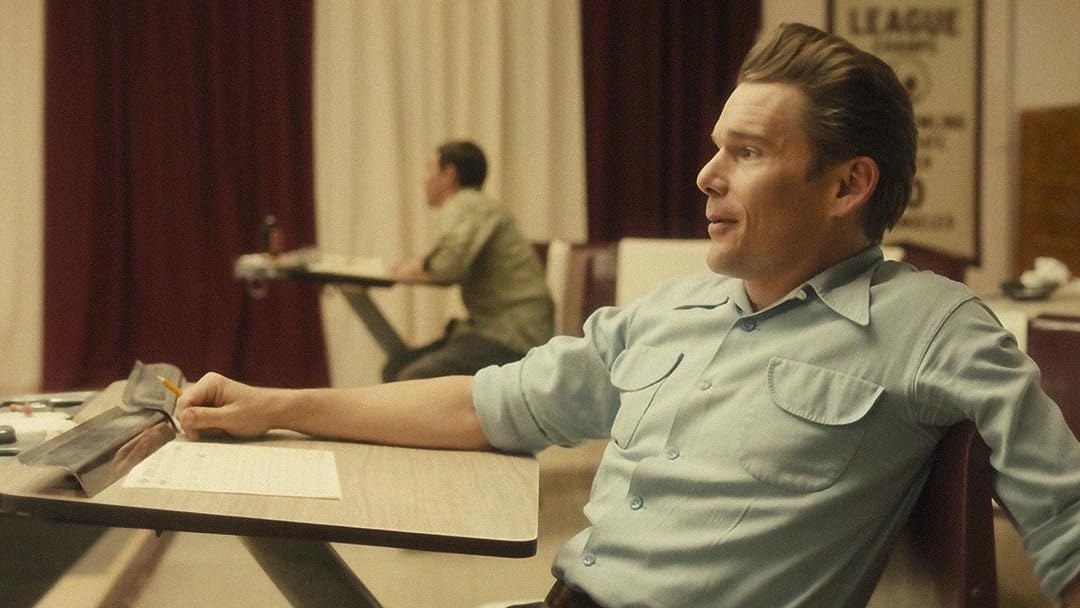 Born To Be Blue

(335)
6.81 h 37 min201618+
Ethan Hawke lights up the screen as jazz legend and icon of cool, Chet Baker, whose comeback from heroin addiction is thrillingly told with wit, verve, and style to burn.

JayJayReviewed in the United States on June 10, 2018
4.0 out of 5 stars
Engrossing But Incomplete
Verified purchase
The wife gives it five stars. And I think that this would be a really enjoyable movie, and a great intro to the character that is Chet Baker, for those who know absolutely nothing about him. Now, I am no expert myself about Baker, but even I know enough to know that this movie - for whatever reason(s) - leaves out a heck of a lot of important stuff, including the beginning and ending.

For the snippet of the story that this film deals with, it is a really quality and engrossing film. Having said that, if you think you know the Chet Baker saga from watching this film, you have unfortunately been deprived of some of the most important aspects of that saga.

Bruce LondonReviewed in the United States on March 22, 2021
4.0 out of 5 stars
Dead man walking!
Verified purchase
I have a huge collection of Chet Baker's recordings. Something tragic about trumpet players. Bix Beiderbecke, Young man with a horn with -Kirk Douglas, Fats Navarro, Clifford Brown. Of course musicians always playing in bars, late at night, cigaretts, smoking grass. Willie Nelson and It's Not a good life but it's my life" Darkness colors this film to the point when color is turned on-it's dark color. The first 15 minutes are so dark you can't see anyone or anything, and you can't hear any dialouge. The music I wish it was more offered, and Hawke's singing should have been discouraged' Just use Bakers recordings and let Hawke do something else on screen. Still and all this is by far the best effort to show us Baker as he was. There is a black and white film noir with Baker as he really was and is. But talent is one thing and being dead has not much to do with it. As Jonn Ford the director of most of John Waynes films one sais,"the camera loves certain people". An drama about the best we'll see and hear is worthwhile. Chet wasn't disturbed or mentally ill- he loved music and he loved being high and lived exactly as he wished. Duke Ellington was once asked."how would you rate Count Basie?" Ellington remarked "You don't rate an Artist, you appreciate an artist"
One person found this helpful

jimudlerReviewed in the United States on June 19, 2020
3.0 out of 5 stars
Chet Baker Bio-Pic
Verified purchase
I thought Ethan Hawke's portrayal was convincing. However, my skin crawled when Hawke attempted to sing like Chet Baker. Terrible! The producers could just as easily have used Baker's own singing on the sound track. I have a similar objection to the substitute for Baker's trumpet playing. It was good, but it was not Chet. Furthermore, Hawke's close-ups with trumpet clearly showed that his cheeks were motionless, that he was not blowing the horn.

I had hopes that the title, Born to Be Blue, would be reinforced by Baker either playing or singing that tune, which was written by Mel Torme and Robert Wells. Alas! No such luck.
3 people found this helpful

Amazon CustomerReviewed in the United States on May 10, 2022
5.0 out of 5 stars
Ethan Hawke gives a stellar performance as Chet Baker
Verified purchase
Although I am a huge jazz fan, I didn't know much about Chet Baker's life. So I am not grading the film based on historical accuracy. Ethan Hawke is always so committed. I never questioned the realism of the musical performances. There are so many music films, even the most acclaimed ones, in which the performances look distractingly unauthentic. I never had to think about that watching this film. They also did a great job of depicting another time period on what I assume was a small budget.
This film has an interesting twist on the typical addiction-recovery story that we have seen told over again. I Walk The Line, Ray, and Crazy Heart all tell essentially the same story in this regard. Born To Be Blue adds an interesting and possibly more realistic twist to the formula. Best feature film about jazz in many years!

mellowraith2010Reviewed in the United States on April 27, 2017
5.0 out of 5 stars
Born to be Blue Chet Baker portrayed by Ethan Hawke
Verified purchase
not going to have any spoilers here. just to say that Ethan Hawke did a great job! Have been a Chet Baker fan,
and did not know the whole story of his life,but this sort of fills in the gaps. I am a trumpet player,nothing close to
Chet Baker of course,and have some messed up dental situations with busted up front teeth and am having alot of
work done and hope I can recover as Chet did,His music will always stand up against anything today.
Also on prime,watch the Late great Chet Baker in "Candy",a sort of documentary,its free with prime. it centers on post recovery
of his chops .
6 people found this helpful

Robert ClarkReviewed in the United States on March 24, 2021
4.0 out of 5 stars
Good flick
Verified purchase
If you’re interested in the life of Chet Baker, you should enjoy this fictionalized telling of his life story. Ethan Hawke is amazing, as he becomes Chet Baker! Just keep in mind, a lot of the facts are wrong, or sensationalized. I would suggest enjoying the movie first, then, read a bio of his life on Wikipedia or somewhere else to get more of a true feel four the jazz legends tormented life.

tpalmaReviewed in the United States on June 17, 2020
5.0 out of 5 stars
Ethan Hawke performace as Chet Baker Review
Verified purchase
Ethan Hawke performed splendidly as Chet Baker. He is a wonderful and very versatile actor. He can perform any character in any movie he makes. It is a good life story of Chet Baker put in a movie. It is a very good drama movie that everyone should see it because it gives a lesson in life not to give up on anything you want to do in life. I enjoyed the movie very much and I love the performance of Ethan Hawke as Chet Baker.

Carolyn HuggardReviewed in the United States on December 24, 2021
5.0 out of 5 stars
Chet was divine
Verified purchase
Ethan Hawke was simply wonderful as Chet Baker. Did a fabulous job. I have been a Chet Baker fan for years and hesitated about watching this movie but it did not disappoint. Fabulous!!!
See all reviews
Back to top
Get to Know Us
Make Money with Us
Amazon Payment Products
Let Us Help You
EnglishChoose a language for shopping. United StatesChoose a country/region for shopping.
© 1996-2022, Amazon.com, Inc. or its affiliates