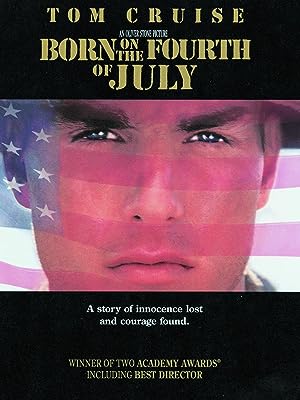 Born on the Fourth of July

(1,252)7.22 h 24 min2021R
Based on a true story, Tom Cruise stars as an idealistic young soldier who proudly enlists during the Vietnam war and returns as a quadriplegic. Co-stars Kyra Sedgwick and Willem Dafoe.

Amazon CustomerReviewed in the United States on October 14, 2016
5.0 out of 5 stars
Excellent replication.
Verified purchase
I'm an anti-war Vietnam vet, went through the Tet Offensive and a conversion experience from stupid patriot to well informed American. This movie is very well done, acting and the roles people played back then are replicatious, I highly recommend this movie because it's
a more comprehensive viewpoint of the time and the war. There never has been an American war in which so many soldiers and veterans refused to support it. One point of view says Nixon had to end the ground war because his troops flat-out were refusing duty by the whole unit. This movie demonstrates the frustration of coming home injured from a war everyone hated; what a drag. Ron Kovic's story is on-going and he recently got married and seems like a very happy man who conquered his disability. I love this movie. Watch it. Then read the book.
27 people found this helpful

joel wingReviewed in the United States on May 2, 2021
4.0 out of 5 stars
Man comes to question his country and what he was raised upon after Vietnam
Verified purchase
Born On The Fourth Of July starts off by laying out the all-American, white middle class life Tom Cruise had. That sets up the whole movie because he eventually comes to question everything he grew up believing in. It’s not an instant transformation after he comes back from Vietnam but a slow process where Cruise tries to figure out who he is as he returns to America. That’s what makes the story powerful. It’s one of Cruise’s more memorable roles because he starts off playing his usual cocky character and then goes in a totally opposite direction becoming reflective and contemplative about his country and upbringing.
3 people found this helpful

Stella CarrierReviewed in the United States on June 6, 2020
5.0 out of 5 stars
Touches On Some Topics Still Relevant and/or Essential Today
Verified purchase
I admit that I must credit getting the idea to see this film Born On The Fourth of July less than 10 hours ago when I was going through some of my books in my apartment and I saw this film referenced in the book Wild Thymes by Sally Van Slyke. Born On The Fourth stars Tom Cruise in the role of Ron Kovic. This film is a who’s who of multiple actors/actresses playing the roles of the characters who indirectly andor directly influenced Ron Kovic’s life. This film touches on multiple sensitive scenes/issues that include: healthcare, events surrounding women and children, how the dynamics of a person’s life is seen through the lens of the person’s parents, friends, other professionals, protests etc. It is tempting to say more involving the plot points though I prefer to take into account others viewing this who still want to view Born On The Fourth of July.
2 people found this helpful

Michael L. WolffReviewed in the United States on August 10, 2014
5.0 out of 5 stars
Masterpiece--a powerful and gripping tribute to the veterans of Vietnam and their agony.
Verified purchase
I read the book before seeing the movie. Based on a true story, the movie captures the essence of the book. A very fallible, but talented young man is influenced by the events of his time and does what most of us would consider the right thing by signing up to serve his country. Unfortunately, what he was told and the "ground truth" turn out to be two different things and his ideals are shattered by a series of agonizing events that leave his body and psyche ruined and almost hopelessly broken. The homecoming scene is possibly my all time favorite movie scene. Difficult and painful to watch, it is a scene that was repeated in thousands of households across the country in the late 60s and early 70s as thousands of traumatized GIs returned home to a nation that had somehow changed, grown, a nation in confusion, a nation of shattered ideals, less innocent. The homecoming scene captures every aspect of this new, alien world, from the confused, sympathetic looks of the neighbors to the new clothing styles, new hair cuts. The country was experiencing Woodstock and Altamount, Watergate, the moon landing, Charles Manson, the fall of Saigon, protesters burning flags. America had changed and Kovac must find his place in this new, foreign, less idealistic world. Incredibly, Kovac triumphs against all odds, growing stronger, deeper from a prolonged agony that most of us can't even begin to fathom. His spirit triumphs over his devastated body to become an elected politician. His amazing transformation is completed in the final scene as he goes from an innocent young boy to a wheel-chaired politician speaking to millions of people. Truly one of the greatest movies ever made.
17 people found this helpful

cindyReviewed in the United States on May 27, 2021
5.0 out of 5 stars
Must watch. For aspiring service members, and vets.
Verified purchase
What a rollercoaster of emotions this movie put me through. Joining the Marine Corps this movie captures the awe of patriotism and service to ones country. It also shows how quickly everything can change. I got out early, never was in combat zone and this movie still broke me down. Your service can give you everything you wanted, but also take everything you had. Semper Fi Marines, thank you for your sacrifices to all service men.
2 people found this helpful

Capt. CrusoeReviewed in the United States on September 1, 2020
5.0 out of 5 stars
Brought Me Back
Verified purchase
This movie is well done, a little over done in some areas and regardless of today's critics - Brought me back to a time I rarely talk or try not thinking about. A tough time for our nation and a tougher time for us vets. All of us gave some but some gave all - may we never forget. Not a movie for the faint of heart - God Bless America.
One person found this helpful

Susan M.Reviewed in the United States on July 19, 2014
5.0 out of 5 stars
Up close and personal Vietnam War story
Verified purchase
Great story and acting. Cruise won many accolades for his role as Ron Kovic, and they were well-deserved. Cruise is a dynamo and a heartbreaker here. His enthusiasm and patriotism as an all-American boy from Long Island growing up in a can-do and win-at-all-costs sports and military culture is endearing, and when his bewilderment and growing anger at the mistreatment and disrespect he receives from American public on his return as a parapalegic veteran erupts in brawling rage we want to cheer him on. The movie, directed masterfully by Oliver Stone, himself a Vietnam vet, brings us back to that time when "the music died" and the American dream split in two. Kovic finally achieves success as an activist fighting for soldiers and veterans rights, ironically fulfilling his mother's earlier prophecy, while the family watches JFK give his famous "Ask not what your country can do for you" speech on television, that "I can see you Ronnie, speaking before a lot of people, saying important things, just like him..."
10 people found this helpful

FieryRedheadReviewed in the United States on August 14, 2021
5.0 out of 5 stars
Good movie
Verified purchase
Showed how Vietnam veterans were treated after fighting for our country. Which was disgraceful! It really touched home, because my father in law was a Vietnam veteran who ended passing away in his very early 50s because contracted Agent Orange 🥺 He was never treated with respect when he came back from Vietnam. So sad.
See all reviews
Back to top
Get to Know Us
Make Money with Us
Amazon Payment Products
Let Us Help You
EnglishChoose a language for shopping. United StatesChoose a country/region for shopping.
© 1996-2021, Amazon.com, Inc. or its affiliates