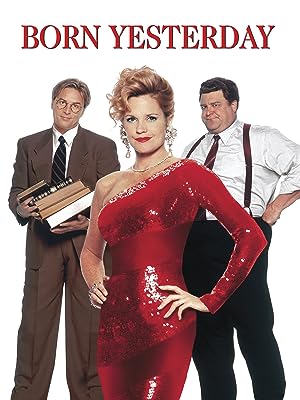 Hee Chul KwonReviewed in the United States on February 14, 2016
4.0 out of 5 stars
LOUIS MANDOKI'S NOT SO BAD REMAKE
Verified purchase
I didn't saw the original movie. I now have seen this movie because I am a huge fan of Louis Mandoki, the director.
Mandoki is, for me, a great director who had no luck to have a bluckbuster movie in his life so far. (bluckbuster means a movie that has been hit that earned more than 100,000,000$ in North America). His finest movies are White Palace, When a man loves a Woman, Innocent Voices, A message in a Bottle. All movies that I mentioned deserves a major hit but they just made an average score. But he is able to keep make new films because Hollywood knows that he is talented.
In this film although there are so many flaws, there is good things going on between Melanie Griffith and Don Johnson. Don's look is totally adorable and if you are a woman, it will be hard not to fall in love with him. His wearing, his eyeglasses, his voice, his attitude and everything else he does to woman-Melanie of course.
Melanie for me is nothing but a grand daughter of the legendary director D.W Griffith and a glamorous no brainor blond uneducated girl who never read newspaper and her roll is just that. Personally I hate that type of girl and I do remember a girl when I studied at the graduate school there is this girl who was just like her who actually acted pretty well. But you know what? We are film directing class.
Anyway, when Don Johnson was hired to the millionair John Goodman(Melanie's fiance) to make Melanie a little bit educated, he really treated her as a lady. Both fall in love. I think Don saw another part of her. Something different like pure part, something childish- in a good way.
The spark between the two was a true beauty and that made me think that even the worst movie that Louis makes, that still is Louis's work and that won't let me down.
This ain't Louis Mandoki's one of the best work but still worth owning.
Maybe if I am absoutley boring one day later, I will watch this movie again.

Michael WeliksonReviewed in the United States on September 15, 2018
5.0 out of 5 stars
Melanie Griffith can act, be funny, and look sexy all at once.
Verified purchase
This remake of a Judy Holiday movie, (with Brodick Crawford and William Holden), succeeds largely to the stellar performance of Melanie Griffith who when she wants to can be as sexy and captivating as any actress on the screen. Just like her drop dead gorgeous mother, Tippi Hedren, Griffith’s charm and natural gifts as an actress make this remake as good as the original. Of course it doesn’t help that Don Johnson can’t act, (Melanie’s well endowed boyfriend in real life).But John Goodman pitches in with an admirable performance as the loutish boyfriend. Excellent buy.
2 people found this helpful

Judy K. PolhemusReviewed in the United States on December 31, 2007
5.0 out of 5 stars
The beauty of brains
Verified purchase
What holds this movie together is Melanie Griffith, a deliberate and thoughtful actress. Add the handsome Don Johnson as the teacher/reporter and John Goodman, the hard-boiled, no nonsense businessman and you have a winner.

This movie is a study in so many things: self-respect, respect for others, integrity, dignity, and the beauty of brains. When Billie (Melanie) tells Paul (Don) that she can get anything she wants from Harry (John), she reveals her lack of understanding of self-worth: she wants a mink coat and gets it because she gives him what he wants. By movie's end she wants more and has earned the self-respect and determination to get it.

The whole education aspect ("smarten up" Billie so she won't be an embarrassment while Harry is in Washington, D.C.) serves as a wonderful example to viewers of the power of knowledge. Harry hires Paul, who sets Billie off on an educational journey that jump starts her unused brain. First, she reads a book that no one actually reads--Alexis de Toqueville. She increases her vocabulary. She acquires culture through the art in the National Gallery of Art, especially focusing on a Van Gogh painting that depicts the dignity of manual labor, a reminder of her father.

Billie questions later what she should do with this new, profound awareness. The status quo is easy to maintain; change is always difficult. In this case, with change come a new self-respect and self-confidence. The new Billie will marry Paul. If it seems she is trading one man for another, that is misleading because this particular man encourages her growth, in fact was the catalyst for it. Good things will come from this relationship.

What an uplifting, happy movie for everyone: the new couple, Harry, who now must learn the art of patience while he awaits re-acquisition of his holdings one property per year, and the viewer, privy to their story and two fantastic kisses!
14 people found this helpful

S. TuckerReviewed in the United States on January 21, 2008
4.0 out of 5 stars
Love this Remake of Born Yesterday
Verified purchase
I purchased this DVD to replace the VCR tape I have of this show. I have always enjoyed movies with Melanie Griffith, if you liked the movie "Milk Money", you will like this show.
The movie is a great romantic comedy that says a lot about how a little knowledge can go a long way. Maybe if more people saw it, they could see the value of an education a little more. Also how a teacher can make learning something fun, almost like a game. One of my favorite parts of the entire movie is the scene where she is at a dinner party and the conversation turns to politics and something regarding the Amendments to the Constitution. Billie (Melanie) corrects the person and tells them that the amendment was a different number than the one they said. Then her explaination of how she remembers the amendments to the tune of "The 12 Days of Christmas" is great. She is using one of the great tools of learning something that you need to remember. Teachers could make learning more fun using these kinds of tricks.
Movies like this can give education a better name and make it seem more worthwhile, it can change a person's view of themselves, especially women, to help them develop confidence, self respect, and the realization of their self worth and help them see that it could be part of the answer to helping them get out of abusive relationships.
Loved the rest of the cast...John Goodman plays the part of the abusive, domineering male with gusto and of course Don Johnson is a perfect contrast to Goodman. At the time this movie was made...Don Johnson and Melanie Griffith were married. They made a great looking couple on and off screen.
One person found this helpful

Kindle CustomerReviewed in the United States on February 8, 2020
5.0 out of 5 stars
A truly enjoyable movie
Verified purchase
Most of the time movie remakes are not very good but I liked this one so much more than the original. Melanie Griffith's character really grew up during the movie and my favorite part is at the dinner party where she taught her husband's guests the song she made up to help her remember the constitutional amendments. I thought Don Johnson was good as the reporter/tutor and John Goodman played a good "jerk".

Priscilla StaffordReviewed in the United States on January 24, 2003
3.0 out of 5 stars
Fun but just doesn't come up to par with the original...
Verified purchase
Melanie Griffith stars in this 1993 film as Billie Dawn, an ex-showgirl bimbo to millionaire businessman Harry Brock (John Goodman). Unbeknownst to the 'slightly' stupid and clueless Billie, Harry has a plan to lobby agendas that are friendly to his construction plans. He goes off to Washington DC to start his campaign taking Billie along with him. After a while, Billie is found to be an incredible embarrassment to all social situations, forcing Harry to make a quick decision. Instead of sending her away, he gets reporter Paul Verrall (Don Johnson) to help Billie 'get some more smarts'. While Billie begins to fall for the handsome reporter, she also discovers herself becoming intelligent and starts questioning her boyfriend.
When I watched the 1950 version of the movie "Born Yesterday", I instantly fell in love with it. With the incredible acting done by Judy Holliday and William Holden, "Born Yesterday" is just a classic! So when I saw the 1993 version at the rental store, I just had to see how it would be. Unfortunately, the movie just suffered by comparison to the original though standing by itself it's not that bad.
The story itself pretty much stays along the guidelines of the original plot. It was a bit disappointing though that a sense of the patriotism Americdans have towards their country isn't given to the viewer at all. When Judy Holliday was going all over Washington DC visiting all the sites, for example the White House, you couldn't help but be drawn through the visits yourself. The movie has it's very funny moments, but some of the time the lines just didn't seem to be delivered well.
The best acting in the movie was done by Don Johnson and John Goodman. Don Johnson is DEFINITELY no William Holden, but he does hold his character together. Plus I couldn't really compare William Holden with Johnson since their characters were different. In my opinion, if they really wanted to cast someone as William Holden, I would have chosen Kevin Costner or Robert Redford, who I'm sure could have done it fairly well. John Goodman was just incredible, I could see a lot of "The Babe" from him in which he starred as Babe Ruth. Unfortunately, Melanie Griffith was pretty awful, sorry to say. While Judy Holliday had gotten an Oscar award for best actress, Melanie Griffith received the Razzie award for worst actress. I don't know about being the worst actress, but I do agree she just couldn't seem to handle her character of Billie.
The movie is rated PG for some innuendos and language so parents should be sure to watch with younger kids. I can't say I really recommend this movie but I do urge people to see it if they were interested. But I must I can recommend people to see the 1950 version "Born Yesterday". Certainly a fantastic movie, it's a family favorite of mine and I HIGHLY recommend it!
5 people found this helpful

L. RingsbyReviewed in the United States on June 13, 2022
5.0 out of 5 stars
Wonderful
Verified purchase
We have liked this movie since we first saw it. We have it on VHS, but no longer have a player. We especially like Melanie Griffiths portrayal of Billie.

Amazon CustomerReviewed in the United States on June 24, 2018
4.0 out of 5 stars
Comedy about being a MIlliionaire
Verified purchase
A cute comedy. Melanie Griffith is a ditsy blond with little knowledge of the government and finances, but she must learn quickly to be accepted in Washington, D.C. John Goodman is her lover and man companion until Don Johnson enters her life to smarten her up. She puts forth the effort to learn and she learns too much for her own good. Goodman and Johnson both propose marriage to keep Brock Village secure. Who does Griffith choose?
See all reviews
Back to top
Get to Know Us
Make Money with Us
Amazon Payment Products
Let Us Help You
EnglishChoose a language for shopping. United StatesChoose a country/region for shopping.
© 1996-2022, Amazon.com, Inc. or its affiliates