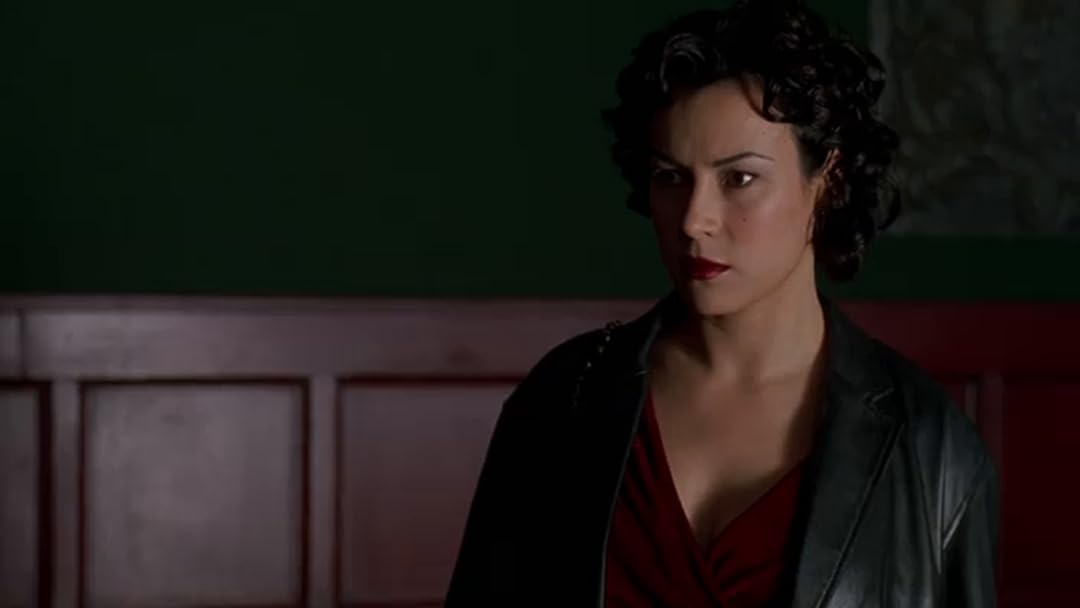 Leaves EPIX in 7 daysRentals include 30 days to start watching this video and 48 hours to finish once started.

Chris BozmanReviewed in the United States on July 20, 2018
5.0 out of 5 stars
A smart film from the team that created the Matrix
Verified purchase
During the 90s low budget neo-noir films had a brief resurgence. Basic Instinct, The Hot Spot, The Last Seduction, A Simple Plan, True Romance, and Red Rock West are all excellent examples of these films. Bound seems to have slipped through the cracks, and has been almost forgotten, which is surprising considering it was written and directed by the Wachowskis. That's right, the same people that made the Matrix trilogy.

Bound involves a lesbian romance that eventually leads to a clever plan to rob the mob. Of course things don't go as planned, and the second half of this film will have you on the edge of your seat.

Jason ZimmermanReviewed in the United States on April 12, 2019
5.0 out of 5 stars
A Gritty Lesbian Film With a Happy Ending?
Verified purchase
The Wachowskis did it in 1996. Makes you wonder why nobody seems to be able to do it today. If that doesn't tickle your interest, maybe the fact that all the effects are practical will. This was shot on a small budget before CGI was reliable. They managed to get some shots we wouldn't see replicated until studios could just animate them (the title sequence was done in an apartment with timed lights jsyk). All in all, it's a great little heist flick with a lot of good shots, a good romance, and a gripping plot-line.
19 people found this helpful

JLeeReviewed in the United States on July 14, 2020
5.0 out of 5 stars
Gina Gershon and Jennifer Tilly are terrific
Verified purchase
I saw this movie years ago and always remembered it fondly. I just watched it again, and it was still a lot of fun (not counting the more violent moments, of course). Gina Gershon and Jennifer Tilly are absolutely terrific in their scenes and in their chemistry. Christopher Meloni is a surprise as a not-too-bright psycho. Joe Pantoliano, as one of the leads, is a bit harder to take. He talks in a high-pitched voice with an exaggerated accent, more appropriate for a cartoon than a live action movie, and he overacts to the point of being absurd.
6 people found this helpful

You Can Call Me "Books"Reviewed in the United States on October 4, 2020
1.0 out of 5 stars
HUGE LET-DOWN 😤
Verified purchase
The actual film is an EXCELLENT experience. But THIS DVD BRAND/COPY is pure %$@! 😡😠😡😵😭😢
I owned a copy of this film printed in the early 2000s and it was great. But this new copy, different company, packaging, etc. is just a CHEAP TRANSFER- skipping, freezing, no audio setting menu, no trailers, and NO ENDING/CLIMAX. The box and disc are shiny clean and cellophane wrapped BUT IT'S A MAJOR DISAPPOINTMENT & WASTE OF MONEY. I pity anyone who hasn't seen this SPECTACULAR sexy sapphic neo noir yet.
Yes, buy this movie but not THIS RELEASE.

Catherine SeiferthReviewed in the United States on October 19, 2019
5.0 out of 5 stars
Beautifully acted love story delivered from a unique perspective. Wonderful to enjoy.
Verified purchase
Really well cast and acted- omg the VOICE of Corky. It's not written from a mangaze point of view- and it really stands out as a result providing a very unique perspective. The unusual is regarded as banal and not even a topic, it's understood in a non-judgemental point of view. The scam, the plot, is creative but really just the MacGuffin used to deliver a really beautiful love story.
5 people found this helpful

John Alan DayReviewed in the United States on May 23, 2021
5.0 out of 5 stars
A Really Good Movie
Verified purchase
Loved this gem. Joe Pantoliano was fantastic, same for Jennifer Tilly and Gina Gershon. Who as the best in this flick, well I got to lean toward Joe. To me, he did an Oscar winning job as Ceasar.

I'm not going to give away the end but it wasn't quite what I expected. And yes, the women made love in the movie, don't be offended, it was well choreographed.

All in all, I loved this movie and will most likely watch it again.

joel wingReviewed in the United States on May 6, 2021
4.0 out of 5 stars
Super sexy crime flick
Verified purchase
Bound is a super sexy crime flick featuring Jennifer Tilly and Gina Gershon. Tilly plays the master manipulator who seduces Gershon to help her out in a plan to rip off her boyfriend gangster Joe Pantoliano. The story is neo-Noir with Tilly playing the classic Femme Fatal. It also plays with fate. All three of the main actors are great and the ending is exciting with the tensions and twists and turns. It was also made by the Wachowski brothers of Matrix fame.
2 people found this helpful

Kevin DudleyReviewed in the United States on May 15, 2012
5.0 out of 5 stars
French import blu-ray review (the film itself is still exceptional!)
Verified purchase
Bound was the stunning 1996 debut of writers & directors The Wachowski Brothers that didn't do that great of business at the box office due to a limited release but wound on many critics' top 10 film lists of that year. It remains my personal favorite film of theirs to date and also one of my favorite films of all time. Gina Gershon & Jennifer Tilly literally burn up the screen with sexual chemisty and Joe Pantoliano is hilarious & high entertaining as in all of his other film roles to date. I have always felt that it's a truly great film that still has yet to receive a stateside blu-ray which brings me to the French import blu-ray that I finally gave in and bought recently through Amazon.com.

First of all the picture quality on the blu-ray is truly stunning. After years of owning my crappy non-anamorphic DVD released way back when by Artisan, it was truly like seeing the film for the first time all over again. The film is housed on a single layer disc but maintains a very healthy bit rate of around 19 megabytes per second for most of the film sometimes reaching upwards of 24 during particular busy sections. There is a pleasing layer of natural grain present that gives the proceedings a very film like texture. Skin tones are spot on and contrast is perfect as are black levels during some darker sequences. The film is present in its original aspect ratio of 1.85:1 and it's so nice to have this film in anamorphic widescreen.

The audio comes preset with a 2 channel French dubbed track but the 5.1 lossless audio original English language track can be selected from the main menu selection labeled "versions". The filmmaker commentary track can also be selected here too. There is a featurette in the bonus section as well as some filmographies and interviews too.

There was a dual layered Japanese blu-ray released around the same time in 2009 but from what I've read it actually featues softer picture quality compared to this French blu ray release. It also runs more than twice as much too and is much harder to come by so I would go with the French release instead.

If you're as huge of a fan of this film as I am, it's well worth spending 30 dollars on it. I also need to mention that the version of the film on this disc is the slightly longer & more sexually explicit international or unrated cut that features a bit more explicit footage during the infamous hot lesbian sex scene between Gina & Jennifer. It amounts to only about a few seconds of more footage but it does make a difference. Since this disc is Region A it should play fine on all U.S. blu-ray players.

Highly recommended!
26 people found this helpful
See all reviews
Back to top
Get to Know Us
Make Money with Us
Amazon Payment Products
Let Us Help You
EnglishChoose a language for shopping. United StatesChoose a country/region for shopping.
© 1996-2021, Amazon.com, Inc. or its affiliates