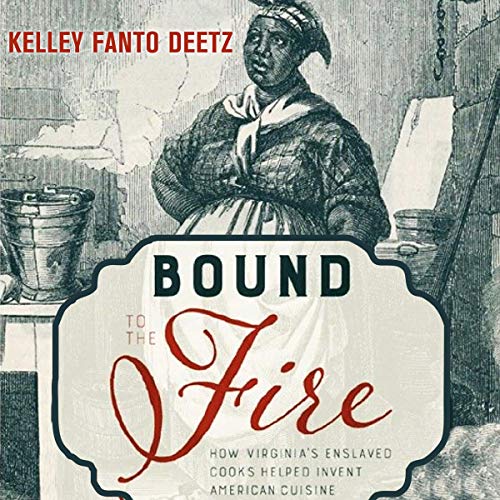 Kelley Fanto Deetz draws upon archaeological evidence, cookbooks, plantation records, and folklore to present a nuanced study of the lives of enslaved plantation cooks from colonial times through emancipation and beyond. She reveals how these men and women were literally "bound to the fire" as they lived and worked in the sweltering, and often fetid, conditions of plantation house kitchens. These highly skilled cooks drew upon skills and ingredients brought with them from their African homelands to create complex, labor-intensive dishes such as oyster stew, gumbo, and fried fish. However, their white owners overwhelmingly received the credit for their creations.

Focusing on enslaved cooks at Virginia plantations including Thomas Jefferson's Monticello and George Washington's Mount Vernon, Deetz restores these forgotten figures to their rightful place in American and Southern history.

"A lively and insightful account of a still-largely-unfamiliar aspect of the history of American slavery." (Publishers Weekly)

"A great service of expanding the literature connecting African and African American foodways with those with which we are familiar." (H-Net Reviews)

"A fascinating account, illustrative of the invisibility of individuals whose work was central to the public performance of plantation culture." (Choice)

4.7 out of 5 stars
4.7 out of 5
127 global ratings
How are ratings calculated?
To calculate the overall star rating and percentage breakdown by star, we don’t use a simple average. Instead, our system considers things like how recent a review is and if the reviewer bought the item on Amazon. It also analyzes reviews to verify trustworthiness.
Top reviews

Michaela L D'Angelo
5.0 out of 5 stars Timely and Relevant
Reviewed in the United States on July 2, 2018
Verified Purchase
Timely and extremely relevant to the current cultural and political climate. A slim, attractive volume – I only wish there was more!

In the deft grasp of Dr. Deetz, the magnifying glass used to examine the past becomes a mirror reflecting our practices and attitudes today. Supported by rich and eclectic primary resources, Deetz skillfully traces the thread of a culture obscured.

Although the overall tone is academic, the format remains as accessible to the layman as it is familiar to the scholar.

As a proud Virginian of many generations, I can only describe the journey through Bound to the Fire as one of self-discovery. BTTF reframes my understanding of my own family traditions, re-shaping the landscape with new perspective of the architectural features and the patterns of living – and foodways – in my community.

I feel closer to my own past through hearinng the stories of previously uncredited artisans, laborers, and hosts. Ardently held notions of Southern food culture, etiquette, and hospitality take on a new richness and texture derived from authentic understanding deployed in Deetz’s paradigm shifting narrative - that Black history and culture *is* American history and culture, from the very beginning.

I await hungrily to devour Deetz’s next missive, confident she will continue to lift the veil of collective memory and reveal more of our own selves.
Read more
16 people found this helpful
Helpful
Report abuse

walktall
5.0 out of 5 stars The Originators of Southern Cuisine
Reviewed in the United States on January 18, 2018
Verified Purchase
Enlightening and educational book about a subject that is overlooked in the discussion about enslavement. The cooks on the plantations worked as hard as those working in the fields. Great job done by the author in exploring another aspect of life on a plantation.
Read more
11 people found this helpful
Helpful
Report abuse

shelia day
5.0 out of 5 stars Cooking to Death
Reviewed in the United States on March 18, 2021
Verified Purchase
I didn't realize how much our ancestor had to endure every day life that part of slavery never cross my mind. To be cooking constantly had to be just physically draining!!
Read more
2 people found this helpful
Helpful
Report abuse

LauraLee Foley
5.0 out of 5 stars History and food perfect combo!
Reviewed in the United States on March 5, 2021
Verified Purchase
I have not cooked anything from this book yet, however, the recipes look great! A lot of history and recipes! I can’t wait to try them out!
Read more
2 people found this helpful
Helpful
Report abuse

Thoughtful reader
5.0 out of 5 stars Very educational
Reviewed in the United States on September 29, 2021
Verified Purchase
I learned a great deal about the inter-relationships between the enslaved and the enslavers, and the food ways shared between them. A thoughtful and sobering read about this important dynamic in the USA.
Read more
Helpful
Report abuse

Heather
5.0 out of 5 stars What a great read.
Reviewed in the United States on July 23, 2018
Verified Purchase
What a great read...definitely learned a lot and I love how it explained a lot of historical pieces us Virginians may take for granted.
Read more
2 people found this helpful
Helpful
Report abuse
See all reviews
Back to top
Get to Know Us
Make Money with Us
Amazon Payment Products
Let Us Help You
EnglishChoose a language for shopping. United StatesChoose a country/region for shopping.
© 1996-2022, Amazon.com, Inc. or its affiliates