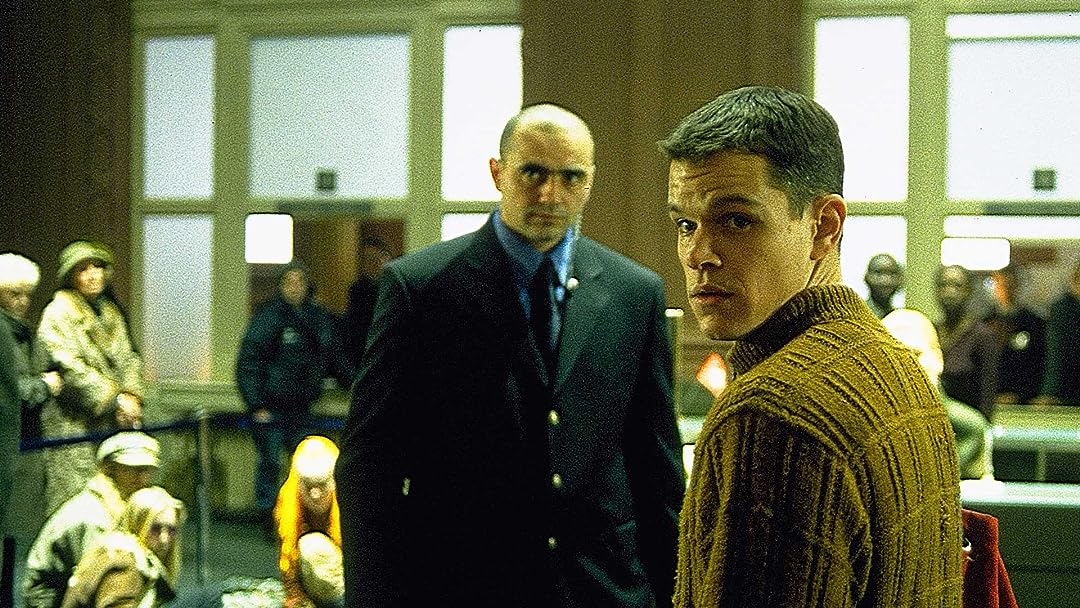 (10,613)
7.91 h 58 min2002X-RayPG-13
Pulled from the sea with two bullets in his back, Jason Bourne discovers he has the skills of a very dangerous man and no memory of his violent past. Racing to unlock the secret of his own identity, he discovers the deadly truth: he's an elite government agent.

Save with with the Bourne movie collection on Prime Video shop now.

D. LoweReviewed in the United States on July 17, 2019
1.0 out of 5 stars
Review for Amazon Prime not Movie
Verified purchase
When you rent from Amazon Prime you only have it for a few hours. I fell asleep and try to watch it the next evening but it's too late :-( movie was pretty good.
18 people found this helpful

joel wingReviewed in the United States on February 12, 2021
3.0 out of 5 stars
Start of a new franchise about a CIA killer gone rogue
Verified purchase
When this movie came out it was the only game in town for high intensity, secret agent action. James Bond had died under Pierce Brosnan. There hadn’t been a Mission Impossible film for a while. Not only that but Jason Bourne (Matt Damon) was something different. He wasn’t a government agent. Rather he’d been trained by the CIA to be a killer but suffered from amnesia. The story is about him trying to figure out who he is and what the CIA did to him.

Besides Bourne not working for the U.S. government there were other differences. First, rather than using special effects or gadgets the action sequences went for realism. Second, much of the story was a mystery as Bourne tried to figure out his past. Last, the people chasing Bourne were the CIA not your usual bad guys. It made for a good mix that only get better over the following films.

William MooreReviewed in the United States on October 13, 2018
3.0 out of 5 stars
Rental is only for 24 hrs
Verified purchase
Love the movie, but annoyed that it expires in 24 hrs. Started it one night after work, but didn't finish it. Tried to finish next evening but rental had expired. Google Play rents for same price, but rental is good for 48 hrs. I should have read the terms before I rented. Will know better next time.
6 people found this helpful

Jorge MoralesReviewed in the United States on February 23, 2019
4.0 out of 5 stars
Maybe just buy the whole series
Verified purchase
Good for a movie night! However, better buy all of the movies in DVDs if you really wanna continue watching the whole series. DVDs because there is not much quality to add, and it will end up cheaper than renting or buying each one of these movies
6 people found this helpful

sand-da-manReviewed in the United States on March 14, 2005
4.0 out of 5 stars
Worth watching closely
Verified purchase
The first time around I missed the thrust of this film. Maybe it was the quick tempo or the technical spy jargon that is thrown pell-mell at the viewer in the first few scenes, but in any case I was quickly confused. By the time I caught up with what Jason Bourne might have been and who he was trying to be, I had lost my desire to care. When the film appeared again a few months later on Cable TV, however, I forced myself to watch it more intensely. Whether it was the manner I employed or merely because I had been previously exposed, the second impression became a more rewarding experience: I was able to follow an intriguing, rather than distorted, plot; the European locations took on more relevance as they richly enhanced the authenticity of the story; and the action served as a prism through which I could better understand the character of Jason Bourne. Eventually I realized that this is not, as I had initially believed, merely a movie peppered with special effects and computerized production to provide immediate visual stimulation. It is all that, but it is also a film of multi-layered substance, not least of which is its complex, sympathetic main character, who, gifted in intelligence and expertly trained, must overcome all odds. Opposed alike by those he was sent to destroy as well as by his own leaders, he must survive by battling, not with special James Bond-like gadgets from another world, but, more believably, with his wits and guile. His amnesia prompts him to search for his identity, but that quest also forces him to question his very role as a hired assassin, perhaps, with the support of a woman he has serendipitously met, regaining his sense of humanity along the way. We are ultimately, therefore, treated to a riveting, fast-paced, yet thought-provoking, odyssey. Matt Damon, appearing more comfortable and confident than usual, ably plays the part of Bourne, complemented by brilliant supporting performances from Franka Potente, Chris Cooper, Brain Cox, and Clive Owen, who, with only a few lines, brings a ton of presence to the "Professor" character.

In the end, I was fortunate that I gave this movie a second chance. It's now one of my favorites.

Financial, Tax, Law GuyReviewed in the United States on October 21, 2020
5.0 out of 5 stars
Action, Action, Action...
Verified purchase
Good story line in this whole series, and full of action. Yes, there is plenty of violence, and probably most unrealistic. Eye opener to what our government get's involved in, and some of it is true if you watch the documentaries of how the CIA got it's start, etc...
2 people found this helpful

Kimmarie SawyerReviewed in the United States on October 26, 2021
1.0 out of 5 stars
didn't produce
Verified purchase
Amazon failed to produce the video I purchased and was unable to view the movie. $3.99 is a very steep price to pay to have the message "Amazon is experiencing problems, please close your player." I will continue to watch free videos and I expect a refund for my missed video.

mwreidReviewed in the United States on January 4, 2022
5.0 out of 5 stars
No Greengrass shaky-cam
Verified purchase
All of the Bourne movies with Matt Damon have great scripts but this is the only one directed by Douglas Limon. That means we don't have to suffer with Paul Greengrass's juvenile shaky-cam chop chop technique used in Bourne Supremacy and Ultimatum. How refreshing.
See all reviews
Back to top
Get to Know Us
Make Money with Us
Amazon Payment Products
Let Us Help You
EnglishChoose a language for shopping. United StatesChoose a country/region for shopping.
© 1996-2022, Amazon.com, Inc. or its affiliates