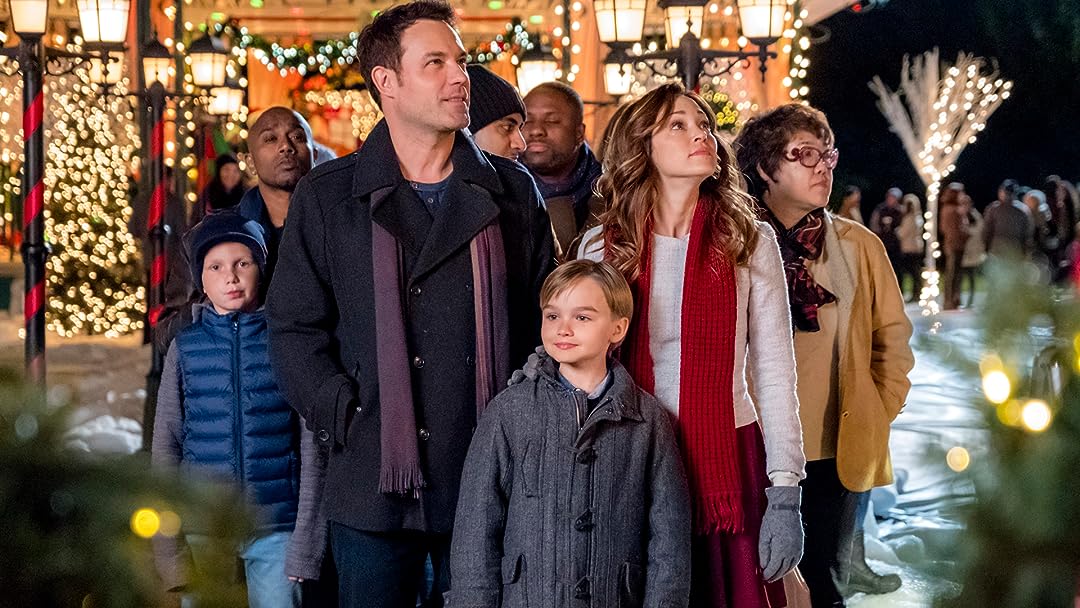 (1,329)
7.11 h 24 min2017NR
A Hallmark Movies & Mysteries original movie. While settling his fathers estate, Finn Conrad becomes suspicious as to why the man left his nurse Willa $100,000. Going undercover to learn more about Willa, Finn risks losing his chance at love.

Old EagleReviewed in the United States on October 13, 2018
3.0 out of 5 stars
Great movie, overall, but something of a slimy male lead
Verified purchase
Had seen this movie on satellite TV and enjoyed it. Ordered it on DVD. Backordered. Waited two months to get it.

The movie is a generally pleasant, cheerful Christmas story. Unfortunately, the writer created a genuinely sleazy, dishonorable male lead, "Finn". I wouldn't call him a 'hero', because he displays anything but heroic character. Actually, he comes across as a spineless, gutless individual! From the first contact with the heroine, Willa, he sneaks around, refuses to own up to to the real reason he is present in the heroine's life, and worse, he lies through his teeth in scenes with the lady's 9-year-old son. All this dishonesty, even when the lady specifically asks him why he seems to be digging at her for damning information over the gift of a hundred thousand dollars from his father. His ultimate goal is to void his father's will and take the money away from Willa, and her son. Lying yet again, he actively fabricates more lies to explain his behavior. Hey. Just a silly Christmas story, but why write such a dishonest character as a supposed 'good guy'. If the remainder of the story, and other characters weren't so delightful, I would have given this only one star. The many scenes when he's lying to the lady and her son literally made my skin crawl. At one point, well into the story, he finally begins to reveal his true self, his purpose, and is interrupted by a minor outburst from the innkeeper. Moments later, he could easily have continued with his revelation. Yet, true to his wimpy self, he drops the whole thing. Finally, in what I thought was an especially bit of screwed up writing, Finn's sister, early on, tries to calm him down, and portrays a character exuding calm, being reasonable, with common sense. But suddenly, inexplicably, in the final scenes, she travels all the way across the country, shows up at the inn, and in a complete reversal of character, becomes a raging monster, seemingly more vicious, more angry, than Finn is! Out of the blue, with no explanation, she's completely switched positions. She becomes this ruthless, vengeful destroyer. And, again, true to form, the wimp stands there sputtering, whining, instead of standing up to his sister to defend both his own position, and that of the woman he has now presumably fallen in love with. No self-confident, self-assured man I know would tolerate the woman's behavior, her blatant, ignorant (she still has no idea of the true events) interference, for one second. Seriously weird behavior. Unrealistic. Lazy writing. Having said all that, yes, Ms. Reeser and the young man who plays her son were excellent, very enjoyable. Finally. I particularly enjoyed the character 'Sage' played by Ms. Hillary Jardine. Lovely personality. Hope to see her again soon.

J&BBrooksReviewed in the United States on November 17, 2018
5.0 out of 5 stars
"A Bramble House Christmas" is truly one of Hallmark's very best films ever
Verified purchase
Our family loves Hallmark films and has for many years. We especially look forward to the Christmas films every year. Of the new Hallmark films that are released each year, Christmas or otherwise, there are always a number of stand outs, and Bramble House is one of them. It's so well done. The story is unique and original and extremely well written, and the actors are all just wonderful and do such a tremendous job with their characters. Autumn Reeser and David Haydn-Jones in particular are really exceptional and give such touching performances. The supporting cast is also top notch. It's one of our all time Hallmark favorites.
9 people found this helpful

Jerry FlackReviewed in the United States on October 25, 2018
5.0 out of 5 stars
One of the Best
Verified purchase
Bramble House Christmas has now joined the ranks of my most favorite Hallmark Christmas movies right up there with the film versions of the best of Debbie Macomber, especially the Mr. and Mrs. Miracle films.

The plot is simple but charming and heartwarming. The acting is especially good in the lead roles and the Christmas decorations in both the town and within the bed and breakfast setting are visually stunning. One would really have to be Scrooge not to find something good to like about this sweet film. It bears watching many times.

Pen NameReviewed in the United States on May 17, 2020
4.0 out of 5 stars
A fairly standard Hallmark Christmas film with a bit of a twist!
Verified purchase
Children's book illustrator Finn Conrad (David Haydn-Jones) is outraged after learning that his wealthy father left $100-thousand in his will to a care-giver named Willa (Autumn Reeser). He & his sister Molly (Julia Benson) discover that Willa & her small son Scout (Liam Hughes) are spending Christmas at a hotel called the Bramble House, and so Finn goes there with the intention of uncovering Willa's sordid secret. Instead, he finds a beautiful & sweet young single-mother with NO nefarious agenda behind her unexpected inheritance. Soon he & Willa are hitting it off, with Finn sincerely regretting his initial plans to denounce her as a greedy gold-digger, but his sister Molly remains to be convinced. And so, when Molly arrives unexpectedly to spill the beans, well, this being a Hallmark video I'm guessing that everything will sort itself out in the end...
One person found this helpful

KaliReviewed in the United States on November 26, 2018
1.0 out of 5 stars
Drama not a Happy Hallmark
Verified purchase
First, take away the Christmas trees and what do you have, A sick child, Mother in need of money, Family Drama, and oh the lady with a cane that needs helps. COME ON! The main actress and actors lying etc. NO THANK YOU. Glad I did not wait to look at it on Christmas. Will donate this DVD to local thrift.
5 people found this helpful

Robert N. JacksonReviewed in the United States on December 10, 2018
5.0 out of 5 stars
One of the very best yet!
Verified purchase
I won and have watched many Hallmark Christmas movies. They are my very favorite movies. So heart warming and uplifting. Great acting, great plot and story line. Like me, you will watch it a couple of times, if not more, before and after Christmas.
5 people found this helpful

MovielovinmomReviewed in the United States on October 19, 2018
4.0 out of 5 stars
Cute movie
Verified purchase
A mystery (sort of) and a romance in one! Pretty good Hallmark movie. Set in a bed and breakfast type hotel at Christmas time. Autumn Reeser is usually a pretty good one to watch.
6 people found this helpful

Jon P. LittigReviewed in the United States on February 24, 2021
5.0 out of 5 stars
A Misunderstanding Changes Their Lives
Verified purchase
This film explores a misunderstanding and asks the main characters to question their motivations and assumptions. The lead actors are well cast as are the supporting players. It is a feel good movie which does not require one to suspend disbelief. Enjoy!
See all reviews
Back to top
Get to Know Us
Make Money with Us
Amazon Payment Products
Let Us Help You
EnglishChoose a language for shopping. United StatesChoose a country/region for shopping.
© 1996-2022, Amazon.com, Inc. or its affiliates