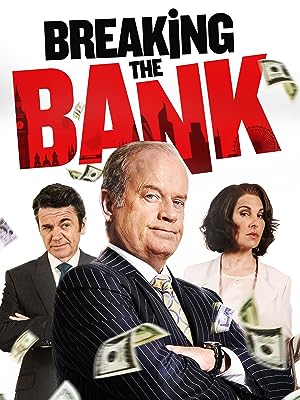 (57)
4.81 h 45 min2016ALL
Kelsey Grammer stars as a banker who loses everything on a risky investment and forms an unlikely alliance to get his life back.

Mike Billington author of Murder in the Rainy SeasonReviewed in the United States on February 7, 2017
4.0 out of 5 stars
A blend of social commentary and romantic comedy
Verified purchase
Let's be clear right from the start: "Breaking the Bank" is not destined to go down in history as an iconic film about the greedy bankers that damn near sank the world economy a few years ago.
That said, this is a charming movie with a fine cast and smooth direction that is something of a cross between "Trading Places" and "Wall Street." It has some pointed things to say about the pirates who ran (and in many cases still do) gigantic financial institutions around the world; many of whom have no real idea what they're doing beyond the fact that they are getting fat bonuses annually. It's also an offbeat sort of romantic comedy that offers some interesting sideline commentary about the harm major banking institutions have done (and in many cases are still doing) to individuals and the environment.
Kelsey Grammer and Tamsin Greig co-star in the movie and both, I think, do their roles proud. Grammer manages to make his bumbling banker someone that the viewer can sympathize with and even feel some affection for despite his ineptness. He spews hoary old one-liners about marriage and parenting like they are new jokes and that is oddly in keeping with his character. Grieg, who is a very fine comedic actress, brings a sort of regal disdain to her role as wife, mother, and majority shareholder of the bank her family founded 200 years ago. John Michael Higgins, as a ruthless American banker out to take over the troubled bank, is smarmy enough to fit right in with the current Wall Street crowd.
The script is fairly predictable and doesn't really ask the actors to stretch their talents very much but that's not a terrible thing in a film that's part social commentary and part romantic comedy. You won't be on the edge of your seat nor will you weep copious tears at the scenes flitting across your screen. Neither, however, will you cringe. As I said, this is a charming movie that you can sit back, relax, and enjoy without having to concentrate very hard.

patrick dillonReviewed in the United States on October 30, 2020
2.0 out of 5 stars
Terrible!
Verified purchase
If it wasn't for the shots of London,and a couple of nice cars this never worked,Kelsey Grammer is at best a one tv hit wonder,i like Tonya Cassidy she can act,saw her before in a few things,i think about 2 jokes in the whole film were original,that's it! sorry this thing went nowhere,i think you have to have genuinely funny people to begin with,none here,very forgettable and at the end of the day it.looked more like an expensive advertisement to visit London.

Joanne KohlbeckerReviewed in the United States on August 27, 2020
2.0 out of 5 stars
Disappointed
Verified purchase
I like Kelsey Grammar, but this movie was not worth renting.

DeloresReviewed in the United States on October 20, 2016
5.0 out of 5 stars
Breaking out laughing
Verified purchase
Loved it!! Very enjoyable film.
2 people found this helpful

Te BadaReviewed in the United States on September 14, 2016
3.0 out of 5 stars
So, so
Verified purchase
Mildly funny, but not Grammer's best film although he maintains an English accent.

HJReviewed in the United States on December 3, 2020
5.0 out of 5 stars
Must see
Verified purchase
Must see ... Luv Kelsey Grammer

Rachael JohnsonReviewed in the United States on November 25, 2019
5.0 out of 5 stars
Kelsey Grammer's lovely performance.
Verified purchase
Kelsey grammer was marvelous in this film. His beautiful performance in this movie made me tear up.

T. McLaneReviewed in the United States on December 7, 2016
1.0 out of 5 stars
One Star
Verified purchase
Disappointed. Very corny. I didn't even finish watching it.
See all reviews
Back to top
Get to Know Us
Make Money with Us
Amazon Payment Products
Let Us Help You
EnglishChoose a language for shopping. United StatesChoose a country/region for shopping.
© 1996-2022, Amazon.com, Inc. or its affiliates