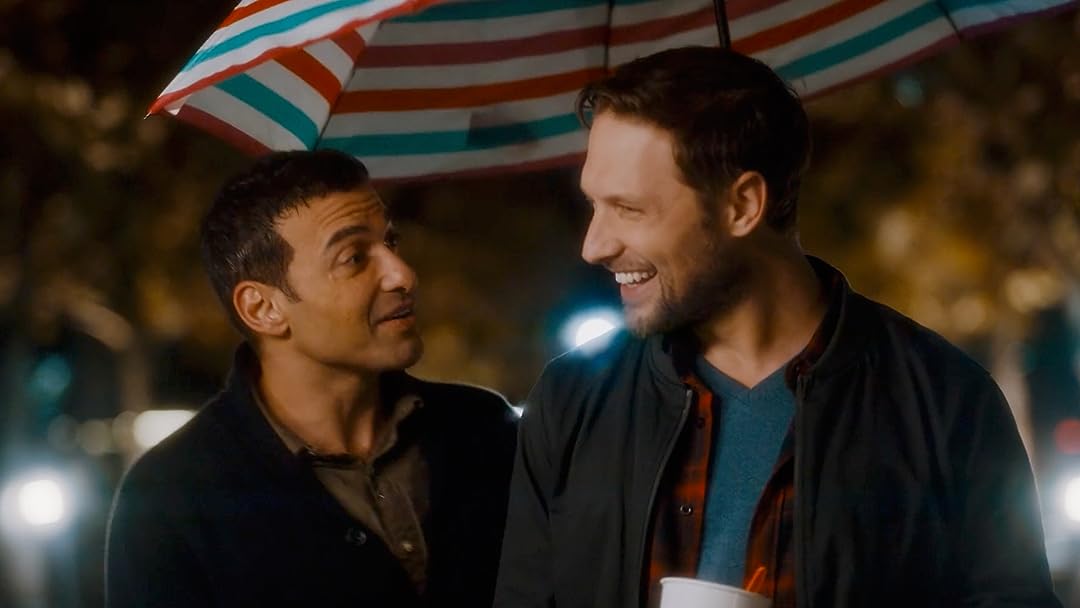 (566)
6.51 h 31 min202116+
Set against the twinkling lights of West Hollywood, Breaking Fast is a romantic comedy that follows Mo, a practicing Muslim, still reeling from heartbreak. When an All-American guy named Kal offers to join him in his nightly Iftars (the traditional meal eaten by Muslims during Ramadan), meal after meal, the two start to discover they have more in common than meets the eye.

Catman1954Reviewed in the United States on March 8, 2021
5.0 out of 5 stars
A Perfect Feast For Lovers of Gay Romance Films
Verified purchase
For those of us who love gay romance movies (dramas and especially romcoms) it has never been the endless buffet of options like you’ll find in the straight world. Instead, it’s pretty much been feast or famine, with the famines far more frequent than the feasts.

But that is changing...and those of us who love Indie romcoms are finding the buffet is continually adding more choices.

Thanks to directors and director/writers like Rob Williams, Doug Spearman, Marco Berger, Thiago Cazaedo and Mike Mosallam, recent years have given us some very high quality features that include gay romance with a happy ending. The man who has set the standard for these films is Williams, who gave us titles like Make the Yuletide Gay, Role/Play and Shared Rooms, and because of his trail blazing, nowadays we’ve been seeing more and more features in this genre by new directors and director/writers.

Breaking Fast by writer/director Mike Mosallam is one of the latest entries into this genre -- and it’s almost literally the perfect feast for those of us who love gay romances with a clear HEA (Happily Ever After); delicately and deliciously put together with the help of an absolutely wonderful cast to carry out Mosallam’s excellent script. This movie isn’t for those who want harsh reality throughout their films or the type of message that bludgeons you over the head. It was made strictly to entertain and delight, and it succeeds like few others of its kind.

Set during Ramadan, the Muslim month-long observance of fasting during the day, the story centers on an American Muslim named Mo (Haaz Sleiman) who lives in West Hollywood and is a physician with what seems to be an idyllic life that includes an openly accepting family and a steady boyfriend. Things very quickly become less than happy for Mo as his 3-year relationship with Hassan (Patrick Sabongui) comes to a painful and indelicate end. And that’s where the heart of this film begins.

The bulk of the movie picks up this story nearly one year later during Ramadan as Mo attends the birthday party of his best friend, Sam (Amin El Gamal) and ends up meeting the main non-Muslim character of the movie, Kal (Michael Cassidy). What ensues is a wonderfully slow burning romance between the two men, which is beautifully bound up by their mutual love of Superman and The Sound of Music.

Because it’s Ramadan and Mo is devout, he cannot have his period of fasting during daylight hours spoiled by food, water or sexual thoughts. So as he and Kal begin to cook together and share Iftar (the meal at sundown that breaks the daily fast) we see them becoming closer and closer.

Of course, no romantic movie can have completely smooth sailing for the main characters; there has to be a conflict that arises sometime mid-film which (at least momentarily) comes between our couple’s budding romance. And Breaking Fast is no different as family histories and drama, and differing views of religion, threaten to permanently separate the two men.

All of this does the job, creating the necessary separation -- setting the stage for the movie’s inevitable and deliciously satisfying ending.

The success of this movie begins and ends with the excellent writing and direction by Mosallam, who helps to build the main characters into people we come to care about and root for. It’s then brought the rest of the way home by absolutely perfect casting and performances, especially by Sleiman (Mo) and Cassidy (Kal), with a huge assist by Gamal.

Their on-screen chemistry is exactly right for that slow burn taking place between the two main characters, and with every flirty remark or subtle (but obviously sexual) glance by Kal, it becomes clear that these two can have something very special together if they want it badly enough.

Throw in some perfectly timed comedic scenes featuring Gamal -- and an almost equal number of poignant and wise interventions by his character of Sam; and then add the very delightful Rula Gardenier as Mama, and your film is on course for a most spectacular cellular recipe.

As is the case with most really good Indie movies, Breaking Fast is tied together wonderfully by its spot on cinematography and eclectic choices for music; and some of the most mouth-watering meal scenes you can imagine that feature a spectacular array of Middle Eastern foods (the movie is about breaking daily fasts after all). By the end of the movie, you find you have enjoyed a feast for the eyes, ears, heart and soul.

And major kudos to whoever made the choice to put the subtitles (when Arabic is spoken) in yellow, making them very easy to see and read. Too often, great Indie films with foreign languages choose to use white, and the words get irritatingly lost in the background.

I’ll close by saying that viewers should be sure to watch this film more than once, so they can pick up on all of the, sometimes, subtler themes that are happening on the screen. You won’t regret one second of watching, no matter how many times you choose to do so.

Richard D. TrimmerReviewed in the United States on September 13, 2022
5.0 out of 5 stars
Great movie.
Verified purchase
This is just a great feel good movie. Funny and charming and surprising in a lot of ways. This is a favorite gay love story. Well written, well acted with a definite point of view. Really really good.

Amazon CustomerReviewed in the United States on September 17, 2022
5.0 out of 5 stars
Good movie
Verified purchase
Held my interest all the way through. Loved the main actor.

Mark ScottReviewed in the United States on August 25, 2022
5.0 out of 5 stars
A Very Nice Love Story
Verified purchase
What a great little movie! I'm a big fan of gay romances/rom-coms that have happy endings. And the two leads are very handsome and charismatic. If you like this kind of film, you won't be disappointed.

woodtiger74Reviewed in the United States on May 17, 2022
3.0 out of 5 stars
A safe movie on an interesting subject
Verified purchase
There have been quite a few movies out there looking at the interplay between faith and homosexuality, but I don't think many come from a Muslim perspective. I wanted to see this movie because of that, and in many ways it really does give you some interesting insights, especially between the two friends who argue over their relationship to Islam over dinner. So the movie does play out like something from the Hallmark channel. Which is fine, but I blame the director for some just pretty bad overacting and interaction (I've seen Haaz Sleiman in other movies, and he's a good actor, but he just comes off as really one-dimensional in this film). The actor love interest comes off as more annoying than cute, and Mo's friend, Sam, and FWB just seem like West Hollywood caricatures (with some random flashes of character development for Sam, but then he goes back to just being a caricature again). Actually, it would've been a much more interesting movie from Sam's perspective and how he met Haaz, as they seem like an unlikely pair (I think this would actually show the tension between gay life but the attraction to the familiarity of a faith tradition you grew up with better). Also big plus for showing Mo's open-minded family. I actually think they were one of the better aspects of the movie.

Taajwar KhanReviewed in the United States on May 3, 2021
5.0 out of 5 stars
Believable, well acted, necessary
Verified purchase
As a gay man and former Muslim, this was an important and quality find. The set up was believable, the representation fairly accurate, the dialog natural, the acting was not bad, and it's Ramadan right now so perfect, right? In terms of religious belief, I'm more on the Sam side of the spectrum but I don't begrudge other's trying to maintain practice so seeing the tension between Mo and Sam was very real and I wish it was explored more than the funeral and dinner. Sam's right, Mo's experience is very unusual, and while my own experience is certainly not nearly as bad as Sam's, that's more recognizable to me than Mo's. When Sam and Kal pushed back against Mo's pollyanna'ish take on things in general, I found myself nodding my head. Perhaps the writer wanted to acknowledge reality but still wanted to make a dramedy that was sweet and charming and not overly preachy. I think he succeeded for the most part. The preachiest guy, Mo, was somewhat put in his place and I think he did grow in the course of the film. I'd give it two thumbs up.

BradleyReviewed in the United States on April 11, 2022
5.0 out of 5 stars
Love at its finest
Verified purchase
This film is the perfect love story! Excellent casts and hits on very important topics. Feel good film and completely worth the watch! Do yourself a favor and kick back and enjoy this amazing movie!

manuel falcon paduaReviewed in the United States on November 21, 2021
5.0 out of 5 stars
Well Rounded and Happily Surprised!
Verified purchase
Yes, of course we all like Kal. However, I'd like to point out the bestie persona is the honesty we need from each other. Cheers to the ever supportive and funny Sam! It's well written with realistic responses by each character. I also love the soundtrack! It's culturally intriguing, with representation from various perspectives. Bright-siding is a new term I learned from this movie. It's overall heartwarming, and not cheesy...will there's a sprinkle of that. It's a rom-com after all. This was enjoyable!
See all reviews
Back to top
Get to Know Us
Make Money with Us
Amazon Payment Products
Let Us Help You
EnglishChoose a language for shopping. United StatesChoose a country/region for shopping.
© 1996-2022, Amazon.com, Inc. or its affiliates