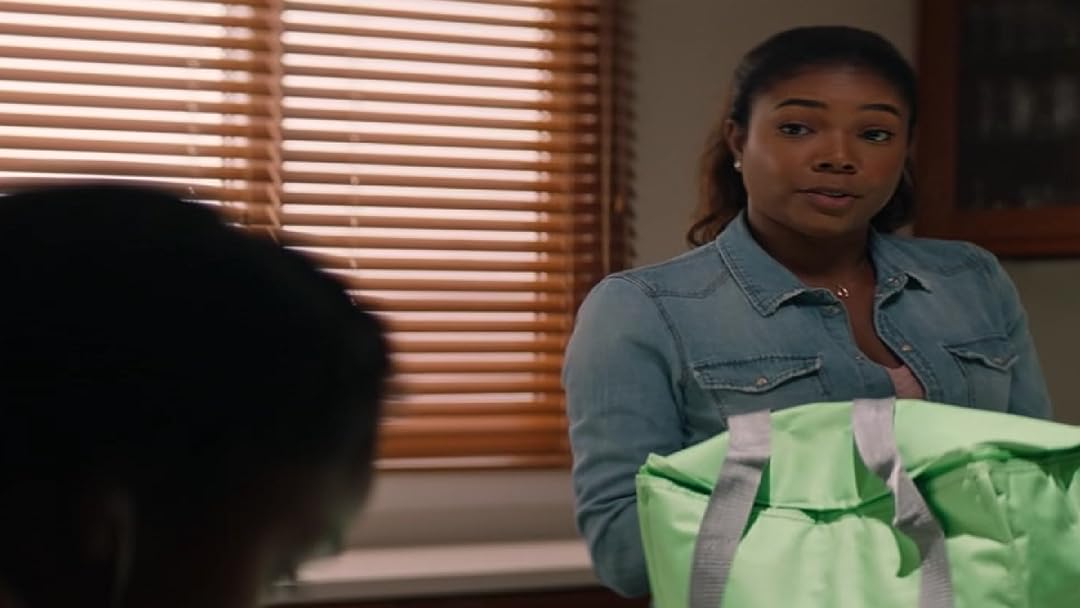 (6,575)
5.52018X-Ray16+
HD. Gabrielle Union stars as a young mother who desperately battles a quartet of violent home invaders to save her children in this thriller.

Aminah AliReviewed in the United States on August 28, 2018
5.0 out of 5 stars
The move was great but Amazon needs to make more movies for free since I'm paying for prime
Verified purchase
Love the movie wish it was more movies on prime u have to keep ordering something but I get it u guys have to make money but it would be nicer if u guys put more movie for prime I mean since I am paying
for it every month shouldn't I be able to watch more things for free that's new and up to date
67 people found this helpful

ninaReviewed in the United States on December 26, 2018
1.0 out of 5 stars
Horrible! Spoilers Included!
Verified purchase
Sigh. I was so disappointed. I had my hopes up and had been waiting to see this since the trailer when it was in the theaters in May. Once again, I get my hopes up for an awful movie.

The only good thing about this movie is Gabrielle Union (who I love). She is the only reason to watch this but even Gabby fans might be disappointed. This wasn't anything unique except a black family were the victims (for a change). I love seeing our people in thrillers and suspenseful movies but this one fell short.

I can't excuse how cliche this was and it was like a million other "revenge/fight back/home invasion" movies. NOTHING was different. One issue is we don't know the characters. We don't get a chance to get to know Shaun and her kids before they are thrust into violence so it makes it hard rooting for this family when we haven't learned anything about them.

The criminals were as cliche and cardboard as you can get. One-dimensional to a T. We got the so-called wise-cracking, suave leader. We got the wimpy thug who keeps whining and is too afraid to kill someone. Then you got the street tough Latino who shoots people at the drop of a hat and ends up killing the leader so he can take the money for himself (no surprise).

It was just...no. Sad that with such a great actress like Union, this movie couldn't have been better. The writing sucked too. For instance her father hid 4 MILLION dollars in this cabin before the bad guys killed him and Union had no idea? Where did he get 4 million dollars from? I guess the dad was rich but nothing was ever explained so I'm just guessing.

That's what I mean. We don't get to know anything about these characters, the good or the bad. No backstory whatsoever. Then at the end, Shaun's husband shows up???? I didn't even know she was married. I can't remember her or the kids mentioning him once. Oh, I remember her talking to him once on the phone but it's so minute that you most likely will forget.

Also, some serious bloopers going on in this film. For example, when Union is outside talking on the phone, she is barefooted when the bald dude attacks her and she runs into the woods. Fast forward about fifteen minutes later when she returns to the house and she's wearing BOOTS when she sneaks back in? Huh? Where did the boots come from? And it was clear as day she was barefoot when she ran in the woods because she and Baldie fought and he grabbed her legs many times and she was barefoot. Yet when she comes back out of the woods, she's wearing boots. *shaking head*

This movie was a mess. It wasn't thrilling and I get they wanted the mom to be tough but she spent nearly two hours sneaking around the house when she could've made it somewhere and called for help. So unrealistic. And the leader said, "She won't run. Not with her babies in the house." Really? Uh, most mothers WOULD run and try to get to somewhere where they could call the police instead of playing this stupid cat and mouse game with these criminals.

One reason they should've gone into Shaun's background a bit is to show us why she is the way she is. She is a tough lady, which is great but why? Most women are not like her where they would start fighting criminals without batting an eye. Sure, a mother would do what she could to save her children, but scaling roofs and playing chicken with dangerous men is not what most would do. So it would've been cool if we saw why she reacts the way she reacts. Like if she'd been in the military or something? She had moves and was a good fighter, not something an average person would be able to do. WE SHOULD'VE KNOWN WHY!

How did she have these skills? Has she been trained in fighting? Where does she get her courage from? I don't believe the film even said what Shaun did for a living. No character development anywhere.

Sigh. I hate not liking this film but it was BAD. I do hope they keep black thrillers going though. I will continue to support but I hope they are better than this sorry ripoff of Panic Room.

Oh and a big thumbs down for the unnecessary attempted rape scene. Ugh. At the end of the movie, they throw in the Latino guy (Duncan) trying to rape Jazz, the daughter. Why???? They'd gone the entire movie where he barely looked at her and all a sudden he wants to rape her on the pool table? It was absolutely no reason to include that. I didn't move the story and it further cheapened the movie.

S.T. E.Reviewed in the United States on August 8, 2018
5.0 out of 5 stars
Wow!! You gotta see this movie!!
Verified purchase
Wow!! You gotta watch this. Kept me on edge of my chair action and suspense!! Gabriel Union is badass awesome. The first 4 minutes into this movie had me jump on my seat and wanting more. I don't care what anyone says, this IS SUSPENSE filled. Union was (as usual) was unpredictable in what was next. If you like suspense /action or love Union, as I do, you need to watch this, you won't be disappointed. All characters were ace on. I'd rate this as a 10+.
24 people found this helpful

Ryan EdwardsReviewed in the United States on July 26, 2018
4.0 out of 5 stars
'Panic Room' meets 'Hostage' but way wayyy better!
Verified purchase
I like this movie, got more to the point than 'Panic Room' ever did (sorry David Fincher! haha)... also I another similar movie this did better than is the Bruce Willis movie 'Hostage'. Kind of blends the two together and does a good job at holding interest throughout, pacing is pretty decent too.

The house is pretty wild.... but not too overbearing... and plenty of times to not predict 'what is next'. I find Gabrielle Union to be a really good lead in this, does not disappoint... glad I took a risk a bought this movie.
20 people found this helpful

Lady Anne (Jessica M. Kandal, PhD)Reviewed in the United States on February 20, 2020
5.0 out of 5 stars
Absolutely Fantastic Example Of Movie Making! Loved It!
Verified purchase
I absolutely loved this movie!!

(But First: Please know I understand that everyone has their own personal feelings about movies so please understand that these are just mine and I mean no disrespect to anyone whatsoever who doesn't agree!)

Great filmmaking is truly hard to find these days but Breaking In ticks all the boxes from acting, script, direction, editing, cinematography, to tempo and everything else! Truly enjoyed this movie!

Thank you to everyone involved with making this - finally a great film to watch with your friends or spouse that has something for everyone and keeps you on the edge of your seat!!

(*unlike what most other films do these days do which is put you all the way back on your couch....asleep....and even if you do wake up during the last 5 minutes you haven't missed anything thing! Lolol BUT THIS MOVIE DELIVERS BIG TIME!)

AGAIN, This is DEFINITELY NOT the case with Breaking In! It was fantastic! Hope others enjoy it as much as we did!
Lady Anne ^^ö^^
3 people found this helpful

TRVLRReviewed in the United States on December 3, 2018
3.0 out of 5 stars
Rent it, don't buy it.
Verified purchase
This movie was...."okay", not great but not boring at all. Yeah, it's full of adrenaline at times but the story is drawn out. There are so many times it could have and probably should have ended. It's that whole...why didn't you just shoot him when you had the gun instead of standing there chatting scenario that drives me up a wall. I like Gabriel Union and I enjoy her in this movie....it's just the story is lacking. Rent it, don't buy it.
8 people found this helpful

Jeannie G.Reviewed in the United States on September 25, 2018
4.0 out of 5 stars
Ninja Mama Bear fights back to protect kids.
Verified purchase
Exciting. Some predictability. As well as a fresh new feel to the mom protecting her kids genre of action/suspense. This mom was DEADLY. I liked her! She knew what she was doing! No hesitation, no silly dilly-dally of the “oh no I don’t want to hurt anyone” sort. She came ready. So refreshing! I have so much respect for this character and her arc and development. Her actions scenes were top notch!! Very believable. I was really into this movie. It held my attention and I could not wait to see what happened next. There was A LOT of yelling at the tv that night. But it was fine! She took my direction well LOL! Kidding of course. I Really enjoyed the movie. Even the child actors, sometimes casting of Child Actors can really let me down. These two actors also came ready and enhanced the film greatly IMO.
3 people found this helpful

Marilyn HarperReviewed in the United States on August 17, 2018
5.0 out of 5 stars
Gabrielle Union Does Powerful And Award Winning Performance In The Movie "Breaking In"!!
Verified purchase
This movie was power-packed, with twists, turns, excitement from beginning to end! Gabrielle Union did her thing!!
A great performance! I bought this movie as soon as Amazon sold it. I loved it !!
12 people found this helpful
See all reviews
Back to top
Get to Know Us
Make Money with Us
Amazon Payment Products
Let Us Help You
EnglishChoose a language for shopping. United StatesChoose a country/region for shopping.
© 1996-2021, Amazon.com, Inc. or its affiliates