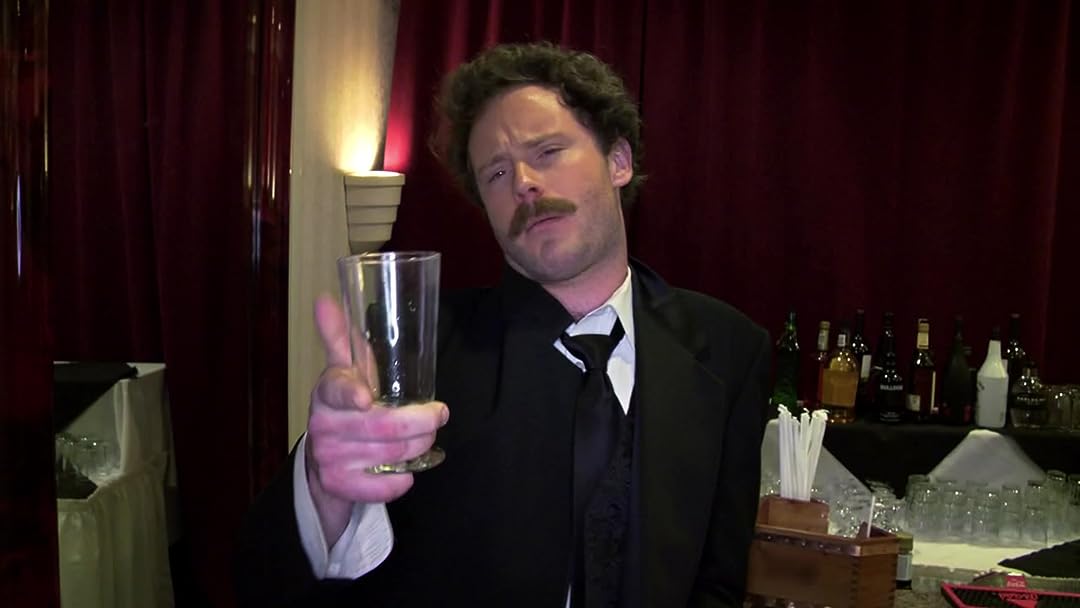 Breakup At A Wedding

(38)
5.11 h 24 min1970PG-13
On the eve of their wedding, Alison gets cold feet and decides to break up with her fiancé Phil. Rather than call off the ceremony, they proceed with a sham wedding. As the guests begin to arrive, shenanigans ensue worse than they imagined.

Doug PetteyReviewed in the United States on October 11, 2017
4.0 out of 5 stars
I like it more than before, now that I've written the review!
Verified purchase
This is Waaaaay better than I thought it would be! The story line is coherent. Even as the night wears on and things get slightly disjointed, they do so within the framework of a bunch of people getting progressively drunk. The acting is amazingly natural; the groom had me by the heart from the get-go. Just the right amount of timely truth-telling and deus ex machina, because those things have been known to happen in real life, too. I would willingly watch more films by this writer, director, and cast. It just dawned on me what this is! This movie is homemade wedding cake. When I was growing up in the early 70's, my mom baked & decorated the wedding cakes for all the young brides in our church. White cake, white frosting with almond flavoring (recipe straight out of the Wilton diy book) and usually blue or yellow frosting roses covering the places where the frosting didn't smooth out perfectly. I was in my twenties before I attended a wedding with a high-end bakery-bought cake and gagged audibly on my first bite of the horrible, supposedly lemon flavored, bread-like cake with the from-a-bucket metallic vanilla whipped cream type coating! Sure the piping was ultra chic black and topper was a set of clear lucite artsy birds, but it all reeked of over-production! That would be, "My Big Fat Greek Wedding," now that I've seen, "Breakup at a Wedding"!
2 people found this helpful

SunfellReviewed in the United States on June 22, 2013
5.0 out of 5 stars
I broke up at this wedding
Verified purchase
Normally, I tend to avoid wedding movies because, well, wedding movies bore me to tears. Happily, this isn't one of those movies. There were tears here, too, but mostly because I was laughing so hard. I had no idea what to expect, and was therefore very pleasantly surprised by the story, which is told with 'found' footage via the very ambitious videographer (Vic James (Victor Quinaz) whose credits at the beginning of the movie remind me of the credits in the ultra-short "Bambi vs. Godzilla"). Shot from the POV of the two videographers who should get combat pay for their often stealthy shots), we ride along for a wickedly sweet story about nearly-weds Alison and Phil who decide to fake their wedding, so as not to disappoint their guests. Watching the couple frantically trying to keep things together (sometimes barely succeeding) was half the fun. And the hotel scenes (including a science fiction convention/party running concurrently with the wedding, with a hilarious collision between the two) had a spontaneity to them that only a seat-of-the pants filming style can lend.

"Breakup At A Wedding" is the first feature-length film from the makers of Periods., who got a lot of practice with their hilarious series of historical shorts, including "Viking Wives", "Fops" and "East of Eden", among many others. They've hit the big time with this one, which is certain to be the first of many wonderful and fun things to come. Big salute to Phil Quinaz, who plays Phil Havemeyer (the groom), takes his turn yet again as the tall, laid-back Zen teddy-bear center of the action. His performance is wonderfully sweet and nuanced, and a great foil for his somewhat panic-stricken bride to be (Alison Fyhrie) and the rest of the guests and family who are remarkably realistic and hilarious on their own.

This is a great first feature. Even if you hate wedding movies, you'll enjoy this one.

OligonicellaReviewed in the United States on June 21, 2019
4.0 out of 5 stars
Kind of a rom/chaos
Verified purchase
Really well done, kept my interest to the credits and into a bit. Not an original POV but done just enough to be unobtrusive to the story. Good dir/edt/act all around. I dropped it to a four because I hate camera shake. Yes, yes, the POV was a videographer but I've seen professional wedding tapes and they don't shake much. Here and there for movement but, done overmuch here.

Jimbo Reviewed in the United States on April 28, 2019
1.0 out of 5 stars
Painful at best
Verified purchase
Maybe it's just my personal bias, weddings make me want to puke. But I actually enjoy romance comedies and the idea of a wedding going up in flames seemed appealing enough to watch... but this was painful- from the Blair witch style shooting to the constant train wreck drama and lack of character development, it was REALLY hard to watch.
For a wedding movie, there wasn't an ounce of romance - and maybe that was the intention all along, but it really made me think that the couple in the movie should definitely not be together.

football fanReviewed in the United States on October 1, 2018
5.0 out of 5 stars
Actress Shines
Verified purchase
Actress Alison Fyhrie steals the show with her phenomenal acting talent.

She's a method actress using method acting techniques second to none. She literally steals the show. She makes this humdrum film actually interesting, worth watching. She was so believable in her part as Alison Jones the line between actress and character was blurred. Acting is an art, and she was a true artist.

Leo VolinReviewed in the United States on September 16, 2019
1.0 out of 5 stars
The operator was not sober
Verified purchase
Impossible to even follow the plot, camera shakes and swings so much. Whatever the reason for this behavior, who needs the inescapable eyesight damage? And whoever survived the feature and liked the plot, will pay for his/her pleasure in the future.

Stephanie F.Reviewed in the United States on October 13, 2017
4.0 out of 5 stars
Works for me
Verified purchase
I liked it. This movie gave me The Office vibes in terms of how it was shot and the style of comedy. I like the kind of humor that was displayed and I found myself laughing out loud on a few occasions. It was lighthearted and fun and kind of poked fun at the sometimes ridiculousness of weddings. I dug it.
One person found this helpful
See all reviews
Back to top
Get to Know Us
Make Money with Us
Amazon Payment Products
Let Us Help You
EnglishChoose a language for shopping. United StatesChoose a country/region for shopping.
© 1996-2021, Amazon.com, Inc. or its affiliates