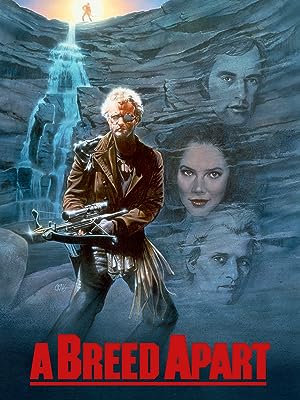 (60)5.51 h 40 min1984R
A picturesque tale of a famed mountain climber, hired to pilfer specimens of a new breed of Bald Eagles and his entanglement with a conservationist and a fishing supply store owner.

Jethro WegenerReviewed in the United States on October 6, 2020
4.0 out of 5 stars
Rutger Hauer Plays with Bear Cubs and Battles Hillbillies in this Conservationalist Thriller
Verified purchase
Rutger Hauer is one of those actors that never really got the credit he deserved.

From Ladyhawke to The Hitcher to this film, he always turned in a damn fine performance in damn fine films, yet the mainstream will always only remember him for Blade Runner.

A shame, cause he did so much more.

Like this film, A Breed Apart, which holds the distinction of being one of the first films to actively push an environmental message.

We follow Hauer's character, a deeply wounded Vietnam vet who has taken to spending his time on an island filled with animals because he dislikes humans so much.

He has a will they or won't they relationship with the lovely Kathleen Turner, a single mother and owner of the only supply shop in Miles.

Hauer spends his days helping animals and riding his island, protecting it from the various poachers that think it's a good idea to piss off a slightly unhinged veteran.

Complications arise when a wealthy collector hires Powers Boothe to head to the island and steal a rare Eagle egg. Boothe, a rock climber who needs money for his next expedition, proceeds to befriend Hauer and Turner so that he can get in and steal the egg.

Throw in some rednecks who won't leave well enough alone, and we have our plot.

While it may seem pretty thin on the surface, the film wisely spends it's time focusing on the interactions between the characters, especially in regards to Hauer.

Knowing what we know now about how war can take its toll on mental health, it's fascinating to see how much of Hauer's behaviour can be put down to his mental wounds. He is a deeply sympathetic character and you can't help but root for him. Especially when he's playing with cute little bear cubs.

Turner isn't given that much to do, sadly. She has some scenes where we question her intelligence, but still her chemistry with Hauer is great. Watching her and her son interact with him is awesome and gives you a semblance of hope that this man can heal his wounded soul.

Boothe plays his backstabbing greedy rock climber to perfection, playing Turned and Hauer off each other to get what he wants.

As for action, there is some, but it's not really well filmed or exciting. The big action scene is done at night and we get no sense of where the characters are in the scene. So it becomes people moving about in the dark and throwing bombs and shooting.

Then again, you don't watch this movie for the action. It's for Hauer's character, as he pulls you in with his performance and makes you root for him. You want him to be okay and to heal.

Give this a go, especially if you like Hauer. This is another fine performance from him.

Although not the best movie in the world, it's fun to watch, has some gorgeous scenery, and Hauer plays with bear cubs.

What more could you need?

Andrew "Big Ugly' HaleReviewed in the United States on November 28, 2020
2.0 out of 5 stars
Watch this once and move on.
Verified purchase
A millionaire recluse with an obsession for rare eggs. A Vietnam vet recluse obsessed with protecting endangered birds. A money-hungry rock climber. Sounds like the making of an exciting adventure ... NOT.

Rutger Hauer seemed more like the Rain Man (Dustin Hoffman) and Kathleen Turner wasn't believable as southern store keep. Powers Booth was definitely Powers Booth and made the film more entertaining. The clichéd hillbilly nuisance is more and more laughable over the years, if not downright racist. Watch this once and move on.
One person found this helpful

Loving WifeReviewed in the United States on February 13, 2020
5.0 out of 5 stars
For all fans of Rutger Hauer
Verified purchase
If you're a fan of Rutger Hauer as I am, this movie will not disappoint you. It is an older movie, but still, a great movie. Sad that he's gone, but his movies will live on.
2 people found this helpful

ExAdirondackerReviewed in the United States on July 20, 2018
5.0 out of 5 stars
34 Year Old Gem
Verified purchase
I saw this movie in 1984 and was captivated. I have been waiting for a copy of it to be released for decades, well worth the wait! Picture and sound quality are outstanding.
6 people found this helpful

R. SarnoReviewed in the United States on September 30, 2018
5.0 out of 5 stars
THE PRINT YOU WERE WAITING FOR
Verified purchase
Beautiful print in camparison to the VHS print recorded in LP. This is a crisp print. Now if someone would release CLEARCUT
3 people found this helpful

Couch WarriorReviewed in the United States on July 28, 2018
4.0 out of 5 stars
A classic on Blu-ray
Verified purchase
A classic finally on blu-ray. It hasn’t aged the best, but still enjoyable.
3 people found this helpful

Patricia O'ConnorReviewed in the United States on September 3, 2017
5.0 out of 5 stars
Five Stars
Verified purchase
Great! Had been looking for this movie for a while.
2 people found this helpful
See all reviews
Back to top
Get to Know Us
Make Money with Us
Amazon Payment Products
Let Us Help You
EnglishChoose a language for shopping. United StatesChoose a country/region for shopping.
© 1996-2021, Amazon.com, Inc. or its affiliates