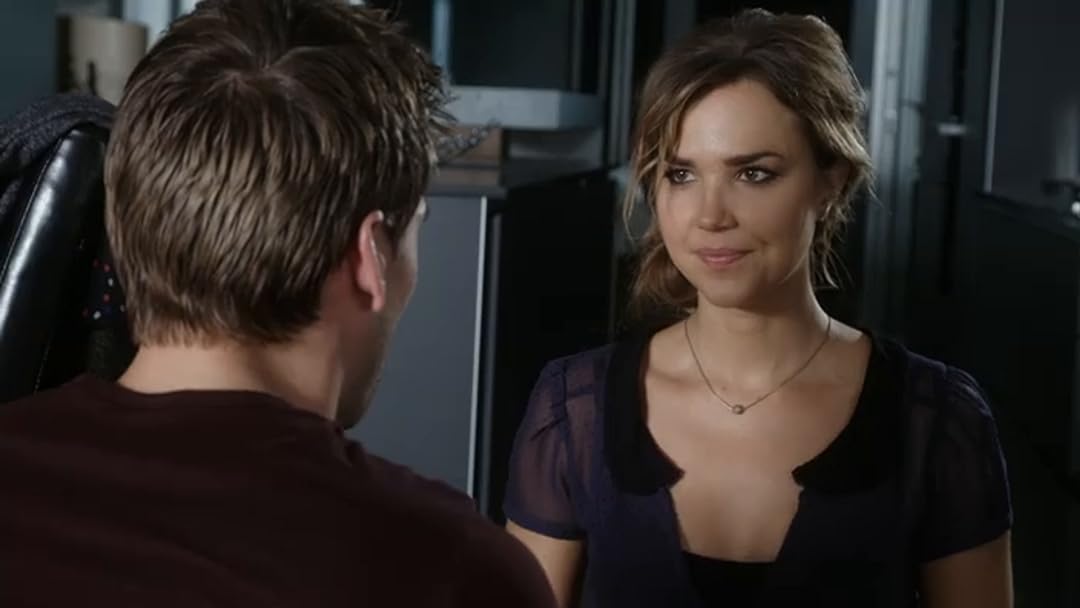 A Bride for Christmas

(337)
1 h 27 min2012X-RayPG-13
After Jessie calls off her third engagement, she swears off serious relationships until she finds "the one." That is, until charming but chronically single Aiden comes along.

MateoReviewed in the United States on October 30, 2020
1.0 out of 5 stars
What the heck...?
Verified purchase
I really can't understand the 5 star ratings. I love Hallmark Christmas movies, even though their cheesy and a lot of them are unrealistic, but this is on a whole other level. It was great 3/4 way through the movie, and then all of a sudden, she flips a switch and decides she's fallen in love with him after knowing him for 3 days, and proposes before they even have a history together. I don't think they even said I love you the whole movie (except he did once when she called off the wedding). Totally rushed and just gross.
15 people found this helpful

Nallea VegaReviewed in the United States on November 1, 2020
2.0 out of 5 stars
Love these actors, sick of this plot
Verified purchase
We all spend a lot of time talking about how we want better in our society and we just can't figure out how it got so wrong...It got this way because even Hallmark writes love stories that are sick and twisted. This is what people now think normal relationships are. It's really tiring once you open your eyes to it, because it's everywhere. Hollywood even gives waaay more air time to a rape scene than a consensual love scene. Sad, sad, sad, America.
12 people found this helpful

Amazon CustomerReviewed in the United States on December 3, 2020
4.0 out of 5 stars
Stick with it
Verified purchase
If you like Hallmark movies and don't mind a Christmas rom-com that is cheesy and not really about Christmas other than having a few Christmas trees, it's worth sticking it out with this one. It starts out as the world's worst ripoff of Runaway Bride but after you get through about the first five minutes where the bride runs away for the third time, it turns into a more typical TV movie rom com.

This is the story of a girl who lives with her sister and they both run an interior design business. She has already dumped three fiancees. Apparently they were not "the one". At the same time, a guy who is a commitment phobic single investor makes a bet with his friends that he can get a girl to agree to marry him by Christmas. Anyway, you about guess how things go. The two end up meeting and he picks her. At first she tries to brush him off but them warms to him. Eventually they develop a strong bond. There are a number of unexpected twists in the plot, the whole thing almost falls apart when she finds out about the bet but there is a happy ending.

It's true that the film isn't very realistic and the U turn both characters make seems abrupt to say the least. However, They do seem to have some chemistry and they make a believable couple as far as that goes. There are a lot of actors you will recognize from other Hallmark movies which makes this one feel a bit more easy to get into. It's definitely not a Christmas classic and probably not a rom-com classic, but if you like this kind of movie, this one offers something just a bit different. It's well done enough that it's engaging, at least once you get past the horrific opening parts which are hard to watch. I think it's worth checking out. It may not make the top shelf in your collection, but it's not bad for a movie night.

Big MommaReviewed in the United States on November 15, 2020
5.0 out of 5 stars
swoon
Verified purchase
Sure, there are some flaws to this movie. I don't know that the mother should be so eager to marry off her daughter, for example, when the daughter clearly has issues that are just not going away.

What made up for the flaws was the central couple, who are simply gorgeous and so sincerely and deeply in love, even though there are a thousand reasons to doubt it. Andrew Walker is the guy who you might not notice and then when you do, you fall in love because he is a good man while being a very hot guy! How great is it that Arielle Kebell's character is just like that, albeit a good woman and very hot, as well!

For a while, I thought the writers were going for a rewrite of 'The Runaway Bride.' Not, it turns out. RB is way too sophisticated and modern to be made into a Hallmark movie. The inspiration is there, but we are tossed back into the good old solid American nuclear family values (the sister may be a little off-center, but it doesn't matter here) and nothing about the environment suggests San Francisco. Even the real estate feels middle America.
You can imagine Andrew Walker's character forever calling his MIL 'ma'm' and his FIL 'sir.' Not a jaded cynical bone in the body of that financial wizard! All down-to-earth humility, and a dog-lover to boot!

The same actors appear together in 'Bridal Wave,' so I look forward to seeing them there.

Jessica BokishReviewed in the United States on April 10, 2021
5.0 out of 5 stars
A clean how to lose a guy in ten days
Verified purchase
I've seen it before and forgot! Realized it when it started but kept going. Haha.
I enjoyed it! It's along the same lines of how to lose a guy in ten days, and many others, but it's clean-no cussing or sex
One line says I'm the only one that can get lucky.
Many people didn't enjoy it but enjoy other Hallmark movies, so that didn't make sense to me because all the hallmark movies they fall in love quickly. I was thinking about that and the one thing about these movies though is that they're not making out and making the relationship physical. They're getting to know the other person, and honestly, most of the time they're not intentionally trying to like anyone. I think it gives a good view of relationships in that you should get to know someone first before becoming physical. The physical, even if just kissing, clouds your mind from real emotions.
Anyway...great actors, and acting
5 people found this helpful

SithReviewed in the United States on January 9, 2021
4.0 out of 5 stars
Typical Hallmark Channel movie, but the chemistry was good, and so was the acting.
Verified purchase
Everyone seems to compare this movie with Run Away Bride, but I thought it had more in common with Worth Winning. I liked it as it kept the comedy to a minimal, no quirky people, or stupid situations, but it remained lighthearted with no intense drama.

One of the chief complaints people have is the sudden U turn or switch in character of the protagonist. Tacky as its presented, anyone who has received "a bolt from the blue," in a relationship would find the portrayal believable, at least I did
4 people found this helpful

SusanReviewed in the United States on November 18, 2020
5.0 out of 5 stars
Great Christmas Movie
Verified purchase
I enjoyed the program, which was touching with the volunteering. Acting was good, too.
6 people found this helpful

Amante dei GattiReviewed in the United States on November 23, 2020
5.0 out of 5 stars
Fun Christmas Romance
Verified purchase
Totally unbelievable, totally hokey, totally fun. Left me with a goofy smile on my face. This is NOT real life, folks; once in a while a fairy tale is a refreshing diversion from real life. Who doesn't love a fairy tale on occasion? So, just forget logic and enjoy the moment of make believe.
3 people found this helpful
See all reviews
Back to top
Get to Know Us
Make Money with Us
Amazon Payment Products
Let Us Help You
EnglishChoose a language for shopping. United StatesChoose a country/region for shopping.
© 1996-2022, Amazon.com, Inc. or its affiliates