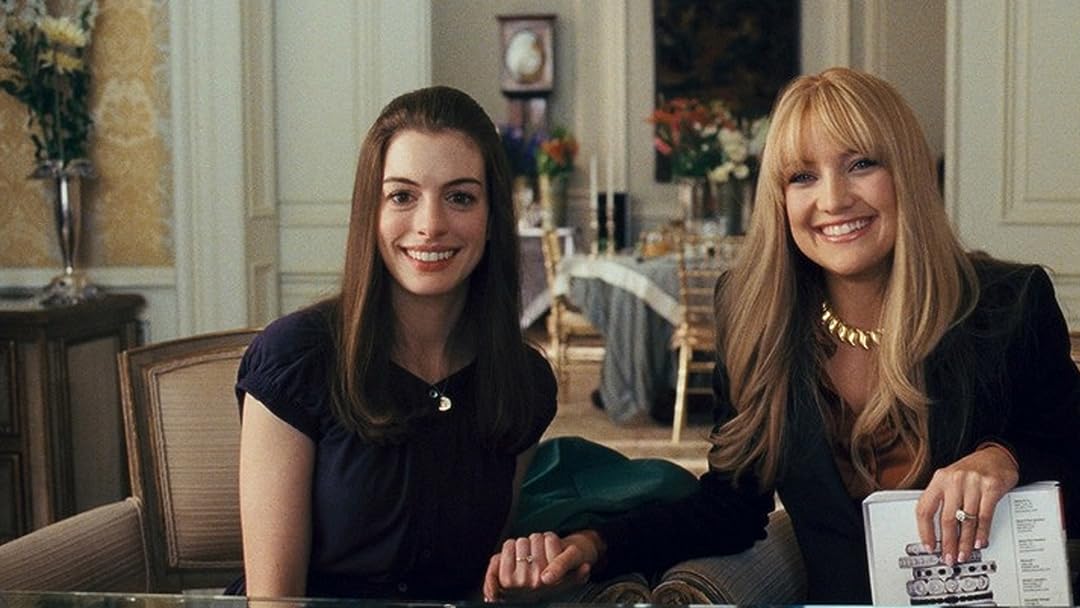 (5,074)
5.51 h 28 min2009X-RayPG
When a clerical error causes a clash in wedding dates, two best friends who'd do anything for each other find themselves in a no-holds-barred, take-no-prisoners struggle that threatens to erupt into all-out war.

KeelyReviewed in the United States on April 2, 2021
1.0 out of 5 stars
Worse than I remembered
Verified purchase
So, I remember seeing this in theaters when it came out. I was 13-ish and saw it with a friend because we wanted to see Mall Cop but it was sold out, so we went to Bride Wars. I remember not liking it because I thought Now, though, I'm going through wedding movies since I'm starting to seriously think about my own and thought, well, this one's free with Prime, maybe I just remember it being worse than it really was.

Oh boy, somehow it is even worse.

I found the premise hard to believe, and it got more ridiculous as it went on. Having three and a half months to plan gave me agita. Thinking about the cost of a Plaza wedding also gave me agita. The idea of these lifelong best friends suddenly being enemies over a wedding was also unbelievable at first, and then I thought it might be a commentary on American wedding culture, and then I realized I was giving the movie too much credit. The plot was at once ridiculous and predictable. The two main characters come off boring, shallow, and pretty unlikeable, even with their iotas of character development. I suppose I can relate a little to Emma's tiny arc of getting sick of being a people-pleaser, but it felt kind of misplaced. I'll make fun of this movie to my friends.

At least there wasn't a sequel.

LissaLeeAnnReviewed in the United States on April 24, 2021
5.0 out of 5 stars
Fun Movie Full of Comedy, Friendship, and Love
Verified purchase
This is a movie a person can enjoy watching multiple times. It is about two best friends who have planned their weddings since girlhood. When both of them become engaged and find that their dream venue is only available for one of them, the war is on. The two of them ensue in a horrible, but hilarious competition to try and make the other look bad. In the process they lose what was most important: the support and friendship of each other. Watch the movie to experience the funny and sweet resolution.
One person found this helpful

tenay32Reviewed in the United States on December 18, 2021
4.0 out of 5 stars
Not the totally superficial cat fight movie you may expect-undersold layers make it worth a watch
Verified purchase
This is normally a movie I would have skipped right by....even if I was only going to have it running in the background while photo editing, but with this cast, I thought I would give it a try. I am so glad I did. While the advertised over-the-top warring antics did get a little annoying (I hate movies that want to portray female relationships as inevitable cat-fights), the soft evolution of both main characters really spoke to me. I loved watching the portrayal of the two archetypes (that I definitely felt I was told were the only two ways to be in this society, strong and heartless, or soft and a pushover) stretching into new versions of themselves; one a structured wedding dress, whose soft chemise was closest to her skin, the other a veritable cupcake dress, whose stiff and scratchy tulle was just out of sight, but critical to her structure.

MLKReviewed in the United States on April 12, 2020
5.0 out of 5 stars
Fluff. Rainy day fun.
Verified purchase
Two talented actresses in a silly rom-com. It's entertaining and allowed me to multi-task, like cruising on Pinterest.
4 people found this helpful

R.C.R.Reviewed in the United States on July 2, 2020
5.0 out of 5 stars
Best friends Chick flick.
Verified purchase
Perfect duo. Reminded me of my bff, good times.
2 people found this helpful

Darlene PurcellReviewed in the United States on May 4, 2021
5.0 out of 5 stars
Besties become formidable nemesis!
Verified purchase
Who better than your lifelong best friend to bring you to your knees on the day you have both dreamed of since your were children! This hilarious, slightly poignant story of besties gone wild made me laugh till tears streamed down my face! Great movie for a dreary rainy afternoon!

AdamReviewed in the United States on October 19, 2021
4.0 out of 5 stars
This is really a good movie to watch with friends!
Verified purchase
I enjoyed this movie. It is a total chick flick but fun to watch. I loved the humor in this movie..Every bride wants to be the special one no matter how close you are to your friend. And,in most cases friendships will work out in the end.

TJ EurekaReviewed in the United States on December 16, 2021
1.0 out of 5 stars
Boring Chick Flick
Verified purchase
Can't believe the high ratings this got. Maybe it gets better, but it was all I could do just suffer through 20 minutes of it. Worst movie I saw this year.
See all reviews
Back to top
Get to Know Us
Make Money with Us
Amazon Payment Products
Let Us Help You
EnglishChoose a language for shopping. United StatesChoose a country/region for shopping.
© 1996-2022, Amazon.com, Inc. or its affiliates