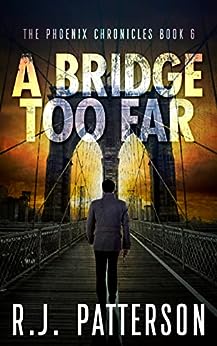 A Bridge Too Far (The Phoenix Chronicles Book 6) Kindle Edition

by R.J. Patterson (Author) Format: Kindle Edition
Book 6 of 7: The Phoenix Chronicles
See all formats and editions
Sorry, there was a problem loading this page. Try again.

The darker the secret, the deadlier the game.

With President Norris buckling under mounting pressure both at home and abroad as U.S. ambassadors are getting assassinated, he turns to Brady Hawk and the Magnum Team to resolve the issue. However, Hawk and company discover something that threatens the very fabric of the country’s democracy—a secret program that operates outside the bounds of the law without any accountability. Meanwhile, a group of Somalian terrorists have taken aim at U.S. shores and have designs on killing thousands of innocent people.

But with Hawk intent on exposing the program while trying to stop an unthinkable terrorist attack, the hunter becomes the hunted. And there’s no second chances in this high-stakes game.

Fans of Brad Thor, Brad Taylor, Vince Flynn, and Robert Ludlum are sure to enjoy this exciting new thriller from R.J. Patterson.

What other readers are saying:

★★★★★ "Reminiscent of the original Bourne books by Robert Ludlum, but with a sprinkling of the relationship of David Baldacci's King and Maxwell.”
★★★★★ “R.J. Patterson is up there with Baldacci.”
★★★★★ “This book is in the vein of Brad Thor and Vince Flynn with a bit of Ian Flemming.”
★★★★★ “Brady hawk is the next Jack Reacher!”
★★★★★ “First Strike delivers excitement, intrigue and action from the first page to the last.”
★★★★★ “This story was imaginative, but certainly came across as realistic.”
★★★★★ “This is a first rate action thriller!”
★★★★★ “If you are looking for some adrenalin packed action, don’t think twice, just grab a copy and start reading, you won’t be sorry.”
★★★★★ “A well crafted page turner.”
★★★★★ “Another great book by R.J. Patterson! I liked that way he makes his characters so real.”
★★★★★ “R.J. Patterson's short chapters and fast moving plot render this novel impossible to put down.”

Karen
5.0 out of 5 stars Good story
Reviewed in the United States 🇺🇸 on September 27, 2022
Verified Purchase
The President of the United States has an agenda that includes a program that uses young men to assassinate his enemies. But proving that will take some harrowing adventures for the team. Good read. Lots of action and a pace that keeps everyone at their wits end.
Read more
Helpful
Report abuse

Eric Cunliffe
5.0 out of 5 stars A Bridge Too Far
Reviewed in the United States 🇺🇸 on September 5, 2022
Verified Purchase
Number 6 in the Phoenix Chronicles certainly does not disappoint. Incredibly action packed and suspenseful. Will Hawk and Alex finally put the Alliance to bed. Read on and find out. In my opinion this is the best one yet.
Already ordered number 7, The Deadly Alchemist. These titles tantalize and give nothing away but, once read, are certainly apt. Thanks R.J.
Read more
Helpful
Report abuse

Jerry Betz
5.0 out of 5 stars good read
Reviewed in the United States 🇺🇸 on September 23, 2022
Verified Purchase
Kept me interested all the while I reading. Very good plot. Loved the charters. Very believable plot. Look forward to the next book.
Read more
Helpful
Report abuse

Amber
5.0 out of 5 stars good book
Reviewed in the United States 🇺🇸 on September 13, 2022
Verified Purchase
Another fast paced Brady Hawk adventure. Edge of your seat action and your villains galore. Can’t wait to read the next one.
Read more
Helpful
Report abuse

John nussrallah
5.0 out of 5 stars great read
Reviewed in the United States 🇺🇸 on September 12, 2022
Verified Purchase
Realistic storyline that parallels our current news. If real life was as easy to fix as these stories—read, enjoy, they’re fixed.
Read more
Helpful
Report abuse

Barbara C. Clark
5.0 out of 5 stars Always fun!
Reviewed in the United States 🇺🇸 on September 25, 2022
Loved the plot and, of course, the characters. Looking forward to the next book.
Read more
Helpful
Report abuse

David C Taylor
5.0 out of 5 stars The best of the Phoenix Chronicles series!!!
Reviewed in the United States 🇺🇸 on August 31, 2022
A Bridge Too Far (The Phoenix Chronicles Book 6) is the one I’ve been waiting for. Of the six books in this series this one had me pumping my fist in the air and screaming YES!!! I’m sure my wife thought I had lost my mind, but hey when “it” happens I’m sure you will react accordingly. Once again Bray and Alex get involved in a situation that is action-packed and filled with intrigue as they set out to resolve the situation. While an issue that has been present in five previous books gets resolved, the Alliance remains a viable problem. I received an Advance Reader Copy and chose to provide this review.
Read more
Helpful
Report abuse

LoisB
5.0 out of 5 stars Great story
Reviewed in the United States 🇺🇸 on September 5, 2022
As always, I enjoy any of R. J. Patterson's books. This one is no exception. The adventures of Hawk and his wife, Alex, keep you on the edge of your seat.
Read more
Helpful
Report abuse
See all reviews
Report an issue
Does this item contain inappropriate content?
Report
Do you believe that this item violates a copyright?
Report
Does this item contain quality or formatting issues?
Report