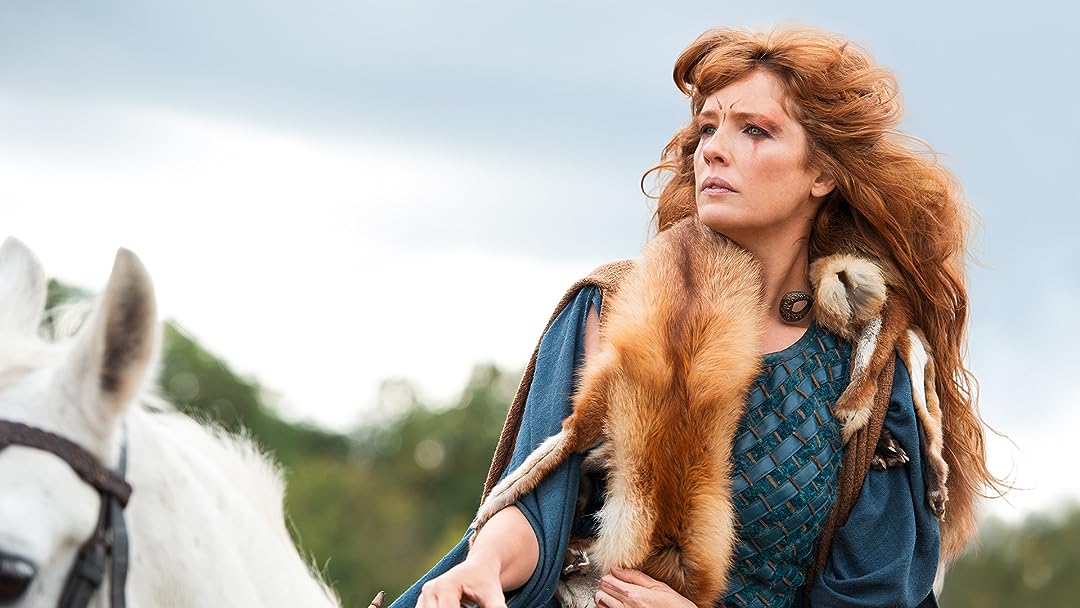 (2,275)
6.82018X-RayUHD18+
The mysterious and tumultuous land of 43AD Britannia is occupied by many warring tribes, until the invasion of a foreign army sparks chaos and allegiances. Celtic rivals Kerra (Kelly Reilly) and Antedia (Zoë Wanamaker) must face the oncoming Roman invasion led by Aulus Plautius (David Morrissey) as it seeks to dismantle the Celtic Resistance.

RCBLAKEReviewed in the United States on October 12, 2018
1.0 out of 5 stars
So tired of blood, gore and torture
Starting out, we were extremely excited about this series. However we, like MANY OTHER PEOPLE, are just sick of having to witness hyper-real torture scenes, ghoulish murder scenes and blood-spattered everything. I am very well-read and I understand the time period this series is set in and the barbaric practices that took place. That doesn’t mean that I want to vicariously live through the horrors through a tv show. I don’t mind allusion to the violence but it truly makes a tragic statement about our society when people actually want to see and ENJOY seeing human beings being tortured mercilessly.
Amazon, you are disregarding an enormous segment of potential viewers by pandering only to the gore-craving segment of your audience. If Britannia had been less gruesome, I’d have given it 5 stars.
174 people found this helpful

ShannonReviewed in the United States on February 6, 2018
5.0 out of 5 stars
Amazing FANTASY Show!
Verified purchase
This show was so captivating I watched all of season 1 in a single day. Very interesting! Note: It is NOT historically accurate, it is not meant to be, it is a fantasy show. Very little is known about the Celtic people, because they did not write down their history. Almost all the accounts of these people is from the Roman point of view, and this series certainly reflects that. I was a little hesitant at first after reading other reviews that stated this series was a "gore-fest". It really wasn't, no more than the walking dead and certainly no where near as bad as game of thrones. If you are able to sit back and take this show for what it is, a piece of entertainment, then I highly recommend giving Britannia a watch! But if you are going to nit-pick at it, skip it. I, personally, cannot wait for season two!
374 people found this helpful

MikeReviewed in the United States on July 23, 2018
5.0 out of 5 stars
Glad I gave this show a try
Verified purchase
Glad I gave this show a try. The negative reviews seem to mostly revolve around historical inaccuracy, but come on already, if you want historical accuracy go watch a documentary. The characters are quite enjoyable and the show itself is fun to watch. I don't want to get too in depth with a review and risk giving things away, but I will surely be hoping for a 2nd season
86 people found this helpful

dougpaulineReviewed in the United States on November 27, 2019
5.0 out of 5 stars
waiting for season 2
Verified purchase
great movie, love everything about it, awaiting for Season 2, when will you guys release it ? :D
44 people found this helpful

lifeReviewed in the United States on August 19, 2018
5.0 out of 5 stars
Great show
Verified purchase
Great tv series, was fun to watch. People crying about the inaccuracy of the history should lighten up or go watch the history channel.
71 people found this helpful

Amazing makeup and fantastic costumes (most of which are surprisingly accurate from a historical perspective).
Creative plot that manages to keep you interested through the first half of the season and absolutely hooked through the second half (some serious expense; it keeps you guessing without being random)
Good score (though it is a sin on their part not to include any Celtic music).
Generally brilliant acting (even the actors who struggle in the beginning literally get their act together; and the ones who do well, do REALLY well).
Not actually a rip off of GOT, calm yourself. After two episodes this is 100% clear.
Crazy good cinematography, editing, and set design. Stunning.
Some funny scenes, but nothing that seems entirely forced (maybe with the exception of the last part of the Brutus and Philo storyline)
Very, very binge-able.
Decent action sequences (not too many and not poorly done, just nothing too exceptional).

For my fellow history nerds: by the low, low standards of modern television, this show is pretty good when it comes to historical accuracy (luckily enough there aren't TOO many accurate accounts form the time) and the show runners are not guilty of the greatest of sins: transposing modern morality and modern ideologies into something that happened ca. 2000 yrs ago. No hardcore politically fueled revisionism, just creative license and mucking about.

I haven't had this much fun watching a TV show in a while, didn't feel tedious and I didn't get bored. Quite the ride really and, yes, I watched the whole season before commenting.

Kindle CustomerReviewed in the United States on November 11, 2018
1.0 out of 5 stars
Awful
Verified purchase
Acting awful, writing awful, production values really awful. What a shame. There was incredible potential in this period of history. Very disappointed. Editing done with kitchen shears.
46 people found this helpful

Steve Russell Jr.Reviewed in the United States on March 7, 2018
5.0 out of 5 stars
Fantastic! Pay attention to detail!
Verified purchase
AMAZING show... usually I can predict a lot of things are going to happen in the TV show but this one gave me a few unexpected turns I did not see coming! I hope there a season 2 soon!

Thank you for your awesome recommendation!
62 people found this helpful
See all reviews
Back to top
Get to Know Us
Make Money with Us
Amazon Payment Products
Let Us Help You
EnglishChoose a language for shopping. United StatesChoose a country/region for shopping.
© 1996-2022, Amazon.com, Inc. or its affiliates