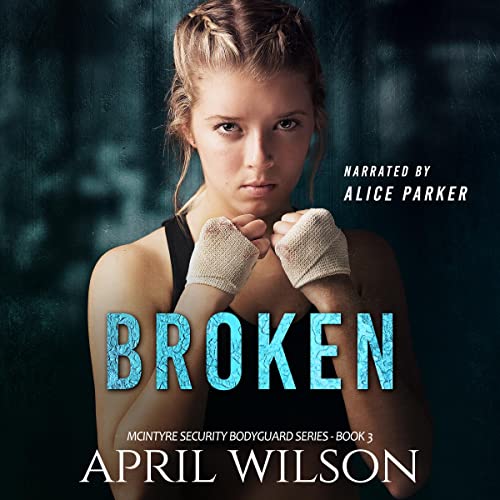 As a 22-year-old female professional bodyguard, Lia McIntyre is a rarity in a male-dominated field. She may be a petite, cute blond, but she's a master of martial arts and Krav Maga, and she can render a man twice her size unconscious in just seconds. Lia hides a painful past behind a snarky, take-no-prisoners attitude. She was horribly betrayed by her first love, and she's determined never to let anyone use her or hurt her again. To make sure that never happens again, she's got rules. One, never sleep with a client. And two, never sleep with the same guy twice. The walls she's built up to protect herself are rock solid. Until she meets her new client, Jonah Locke, a swoon-worthy rock star with a heart of gold.

Jonah Locke is the front man for the most popular rock band in the United States. His band dominates the charts, and he's constantly hounded by crowds of fan-girls and paparazzi. The guy can't sneeze without everyone on social media knowing. A bad break-up with the Queen of Pop sends him from LA to Chicago, where he just wants to lie low and write new songs. Unfortunately, trouble follows him to Chicago. When he meets his new bodyguard, he falls hard for her. But lust transforms into something more when he gets to know the woman beneath the kick-ass shell.

Amazon Customer
4.0 out of 5 stars Broken
Reviewed in the United States on August 21, 2022
Characters. Genre: RomanceLia/Jonah. Rating: 💙💙💙💙 Heat Rating: ❤️ ❤️ ❤️ Series: Yes Length: 368 pagesThis is the book that got me to start the series. When I came across this book the cover intrigued me and tge blurb drew me in. I wasn't disappointed. April Wilson has quickly become one of my favorite authors. There is great character building and a good backstory. Plus Lia is a damn badass so that helps. Jonah is great too. It's nice seeing the woman be the protector.This is part of a series and eventhough this could be read as a standalone, I would read them in order."LSK Recommended"
Images in this review

Kindle Customer
5.0 out of 5 stars Sex video at 16!
Reviewed in the United States 🇺🇸 on November 23, 2022
Verified Purchase
Great read. Great series. Well worth the time. High school football star takes advantage of a 16 year old girl. Video tapes the girls first time. She humiliated, there blood on her and when she tries to stop he rolls her onto her back and get rough. Than he posted the video for all the world to see. Somebody needs to teach this jerk a lesson. The young girl now in her twenties is a martial arts expert. She becomes a body guard to a famous musician. Does she get over this video? Does the jerk get what coming to him and by who? Does the musician get the girl? Read the book to find out.
Read more
Helpful
Report abuse

Kindle Customer
5.0 out of 5 stars Great
Reviewed in the United States 🇺🇸 on December 14, 2022
Verified Purchase
I loved reading this story.
The characters were great.
It kept me turning the pages in the book.
Lia and Jonah.
He is a rockstar.
She is his bodyguard.
They become more.

teach93
4.0 out of 5 stars Good story overall
Reviewed in the United States 🇺🇸 on November 22, 2022
Verified Purchase
While this isn't my favorite of the McIntyre series, it is a strong entry. Lia is a protector with a chip on her shoulder and is determined not to fall to the charms of the rock star. Of course, she does. Their back and forth is entertaining. It was a good read.
Read more
Helpful
Report abuse

Elizabeth Pavich
5.0 out of 5 stars Bodyguards
Reviewed in the United States 🇺🇸 on December 1, 2022
Verified Purchase
Totally in awe with the creativity, humor, and all the tension! Lia and Jonah are perfect with each other. I can't wait to read the next book.
Read more
Helpful
Report abuse

Amazon Customer
5.0 out of 5 stars great reading
Reviewed in the United States 🇺🇸 on December 1, 2022
Verified Purchase
I enjoyed this book very much and I am looking forward to reading all the books from this serious. I love strong women characters..
Read more
Helpful
Report abuse

fan in Boston
3.0 out of 5 stars Wishing for more depth
Reviewed in the United States 🇺🇸 on November 5, 2022
Verified Purchase
I was really looking forward to Lia's story as I saw it as a chance for the author delve into some pretty serious issues with teenagers and the internet. Was a bit disappointed as I felt the author glossed over the underlying trauma & left the story kinda fizzle out. I know its a fine balance between romances/HEA & addressing social issues but I found the characters really weren't fully developed and engaging.
Read more
Helpful
Report abuse

marciathomas
5.0 out of 5 stars Broken.
Reviewed in the United States 🇺🇸 on September 20, 2022
Verified Purchase
I couldn't put this down. What a wonderful read. True love always wins. This is the 3rd book in the series that I have read and I can't wait to start the next one.
Read more
Helpful
Report abuse
See all reviews

Little miss t
5.0 out of 5 stars A amazing book/series
Reviewed in the United Kingdom 🇬🇧 on December 29, 2016
Verified Purchase
The 3rd book in the McIntyre security bodyguard series, and it's a brilliant as the first two books.

This 3rd book is the eagerly anticipated book features Lia's story. Lia is the only female sibling, but she is just as fierce as her brothers. This book features her growing relationship with Jonah when she is assigned to be his bodyguard. This book actually contains lots of humour moments as well as a perfect storyline of romance.

There's less danger in this book than the previous two, but that doesn't distract from the story at all. However if you prefer your male character to be the alpha male you won't find that here as Lia is 100% the alpha lead. I had thought that would make me enjoy it less (I like aplha males) but it genuinely didn't and I put that down to amazing storyline/writing.

My only thought it that book 4 will also be Lia and Jonah's story (a bit like book 1 and 2) because this book, although it did end happy, the ending feels like it was just the beginning of their relationship. I will be waiting not so patiently for it. All 3 books I would highly recommend.
Read more
2 people found this helpful
Report abuse

Ran
5.0 out of 5 stars Beautiful 😍.
Reviewed in the United Kingdom 🇬🇧 on January 9, 2023
Verified Purchase
I feel for Lia. She can't forgot her past. Dark memories haunting her. I love lia and jonah love chemistry. Jonah is nice kind person as a very famous group. How they meet, they falling for them its was interesting to read. I love this book. I love all the characters.
Read more
Report abuse

Stacy
5.0 out of 5 stars Masterful
Reviewed in the United Kingdom 🇬🇧 on November 13, 2016
Verified Purchase
I Voluntarily Reviewed A Complimentary Copy Of This Book

The third novel from April Wilson is a fantastic read that that will grip you from start to finish.
Lia McIntyre is such a great leading female, the way April tells us what happened to Lia to make her the person she is was written in a way that you feel the emotion and frustration as if you were there. Jonah for me was one of those leading males who you love almost from the start, loved that he knew what he wanted and set out to make it happen.

The way April writes is brilliant and works so well, with each book April grows as a writer and I’m looking forward to what comes next. Although this book can be read as a stand alone I would recommend that you read Vulnerable and Fearless first that way you know better who some of the characters are that get mentioned.
Read more
Report abuse

nicpen
5.0 out of 5 stars Amazing - A Must Read
Reviewed in the United Kingdom 🇬🇧 on November 24, 2016
Verified Purchase
I received a free copy of this book in exchange for an honest review.

Where do i start ......... this book is amazing - i couldn't put it down just like the previous two books (Vulnerable and Fearless). Lia is a very stong character and from what i've read in the previous book she came across as a very hard woman (which is good), but it was great to see what made her the person she is. Broken can be read as a stand alone but I would recommend that you read both Vulnerable and Fearless first are characters from these books are mentioned. Just like i feel in love with Shane and Beth characters i did with Lia and Jonah.

I've just started to re-read Vulnerable and Fearless as they are just great books that i could re-read again & again. April thank you for another amaxing book and can not wait for the next two books in 2017.
Read more
Report abuse

Hannah
4.0 out of 5 stars Latest edition to a strong new series
Reviewed in the United Kingdom 🇬🇧 on November 14, 2016
Verified Purchase
I will start off by saying yes I received a free copy of this book in exchange for an honest review. However I had previously brought the first two in this series and was very excited to read this. It did not disappoint and I was so gripped I read the entire book in one day. I would recommend this book to all those romance novel fans particularly those who enjoy a series with siblings, similar to JS Scott's "Sinclair" series.

I love the range of characters Wilson has created and the lovely and feisty Lia being the alpha bodyguard in this book is a delightful twist on the "bodyguard romance" tale. If you want the more traditional take then I strongly recommend books 1 and 2 for Shane and Beth's story. However Lia and Jonah's story is beautiful and I really fell in love with them both.

The only slight criticism I might say is that unlike the previous books there is a little less suspense or threat which made it a little lacking for me. Not wanting to constantly compare to the previous books but it is a slight gear change from Shane and Beth's story which was so intense and dangerous. Lia and Jonah seem to be more about the emotional scars they both carry but don't let me put you off Lia can kick some serious ass and one of my favourite scenes is early on in the book when she breaks in (literally) some new recruits to the firm. Lets just say Jonah is impressed.

I recommend this standalone novel to anyone and put in a silent plea to the author for me...particularly looking forward to Jamie's story. (Please say you are doing Jamie's story).
Read more
Report abuse
See all reviews