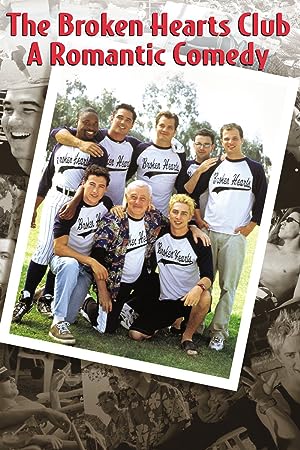 (692)
7.01 h 35 min2000R
The Broken Hearts Club is a story about a group of men in Hollywood, their lovers and friends and the often hilarious, occasionally poignant space in between -- that is if they can get any space at all.

Jerry FlackReviewed in the United States on July 18, 2021
5.0 out of 5 stars
A Blast From the Past
Verified purchase
When all my gay films were on VHS tapes, "The Broken Hearts Club" was a feel good movie that I greatly enjoyed. I also thought it was a good film for men just beginning to come out regardless of age. I thank Amazon and any one else for bringing this great movie to DVD. When it first premiered 20 years ago, Roger Ebert gave it "Two Thumbs Up!" One Amazon critic noted that the subtitle, 'Romantic Comedy' was wrong on both counts. I could not disagree more. This is a big-hearted movie that takes place just barely in the post-AIDS pandemic and is an ensemble movie that tells the separate stories of five gay friends in their mid-to-late 20s. There IS romance and there IS definitely humor. If nothing else, the gay softball team is a hoot. My favorite memory from my initial viewing 20 years ago is very short. Howie realizes almost too late that his partner Marshall whom he has taken for granted for too many years is, in fact, the great love of his life. He makes an impassioned apology to his former lover and vows to wait as long as it takes for him to win back the man he has treated so thoughtlessly. It may sound like a downer, but this really IS a romantic comedy and the audience knows in their heart of hearts that the former couple will come back together for a lifetime. One of the best aspects of "The Broken Hearts Club" is the fact that the lead characters are just average gay men who are struggling to find a place to fit in a world that is not always so accepting. Like the terrific film of the same era (2000-2001), "Big Eden," this is a film to watch again and again. Now, if Amazon or Wolfe would just transfer "Friends & Family" to DVD it would be an even more perfect world.

H. C. CruzadoReviewed in the United States on June 23, 2020
5.0 out of 5 stars
A group of gay men form a softball team!
Verified purchase
Do you want to see a movie where gays are not persecuted, insulted, discriminated or even assassinated? This it! A feel-good movie about a group of gays who argue and fight among themselves every day and still remain friends. And John Mahoney as the team's manager is the jewel in the crown.
2 people found this helpful

Norvell J. MaherReviewed in the United States on June 17, 2015
5.0 out of 5 stars
Gay Love Life
Verified purchase
This is a film just as the title indicates. Even through this film is dated-14 years ago-it rings so very and positively true, even in this helter-skelter world. We are bound by our genetics and environment that we have grown-up to the present day. I have to admit that the many stories built into this film that are some-what glossed over, but for the most part it rings very true to this very day-month-year. LOVE CAN BE A VERY FICKLE MISTRESS! NJMJr!
PS: I must have watched this film at least 4 or 5 times. For some reason it never seems to be repetitious or boring at all. Maybe this is something we all want - to be a functioning and working member of a group of very accepting guys at both professional and personal levels. Amen!
9 people found this helpful

Mike KarrenReviewed in the United States on December 11, 2019
5.0 out of 5 stars
Among the top 5 best gay movies ever made!
Verified purchase
If you're gay or love someone who is gay, this is a must-see! It's true life, full of humor, love, tragedy, dysfunction, drama, but most of all humor. I'd rate it above Brokeback Mountain! Who wouldn't enjoy the award performances of John Mahoney, and SEXY Timothy Olyphant! How does this str8 man play the part of a gay man so well! The baseball games, alone, deserve an Academy Award! With the magic of Scarlatti and Shakespeare...this movie has it all!
One person found this helpful

TerranReviewed in the United States on April 9, 2001
4.0 out of 5 stars
The 30 year crunch
Verified purchase
The main core friendship is about some thirtysomethings going through life-changing/affirming crises and coming out on top - or at least better off than they were before. The commentary on the DVD is the best commentary track I've ever come across; so informative and yet also fun on its own, reaffirming the impression one gets from watching this movie, that it was a fun movie for all the players to make. The friendship of several gay men is the main theme, and the addition of a "newbie" into their midst. The core friendship, the one which is the most intriguing, is between Dennis and Cole, the roommates who are so compatible the actors themselves have immense chemistry between them. Dennis is introduced as a one-night-stand only fellow who decides to mend his ways in search of a meaningful romantic relationship. Cole is the one who is superficial in the extreme, except when it comes to his friends. When it comes to them, he's not superficial at all, which is why - in spite of their envy of him - he is treated with great affection and deference. He is truly the totem they revolve around. Cole is played by Dean Cain, who gives a remarkably layered performance in the role, remarkable considering he is playing what is supposed to be perceived as a totally superficial character. You would think one could not have it both ways, but he does. All of the actors - all good - are cast according to physical type, but they all have stories to be told, and how enthralling the story is has to be up to the viewer's tastes. With an ensemble piece, that's what happens. (You and your best friend may differ on your favorite character and what plotline matters most.) However, the important thing is this film can lead to interesting discussions, and there aren't many movies fun to dissect after the fact. Two classic scenes: the baseball game flirtation between Dean Cain and Kerr Smith, and the intercuts with the guys getting their haircuts. Classic line: "Oh, please, that's right up there with 'He's not gay, he's in a fraternity.'"
2 people found this helpful

Rogue ElfReviewed in the United States on July 9, 2001
5.0 out of 5 stars
Great Ensemble Cast
Verified purchase
When I first saw this movie as a recommendation for me, I read the reviews. Most of the ones I read were not complimentary. In fact, one of them gave it only 2 stars! I give this movie stars because of the acting, the story and the soundtrack. I used to be a fan of The Carpenters many years ago but as I got older, I changed my mind. Two of their songs are featured in this movie are strategically placed and made me fall in love with the music again. Each "category" of gay life is portrayed here in an honest light with no apologies offered or given. An interesting question happens at the beginning of the film, "What does Jack see in the Purple guy?" This question eventually gets answered and it is so obvious. So what did I particilarly like about this movie? See it and the question will get answered.
This movie is a non-threatening movie which can be seen with straight friends, family and co-workers and you or they will not be offended. There aren't any token sex scenes or obligatory nude scenes. Everything is tastefully done. Please see this movie, you will be able to identify with at least one of the characters. A great ensemble cast.
4 people found this helpful

James HillerReviewed in the United States on March 12, 2001
4.0 out of 5 stars
Broken Hearts for Every Light in Hollywood
Verified purchase
Greg Berlanti inspired to give us a film about the perils and traumas of modern gay romance, and he delivers that promise to us in the delightful and occasionally touching film "Broken Hearts Club".
Set in California, "Broken Hearts Club" spins the tales of a group of gay men who are comrades and cohorts in the daily drama of life. Managing to cover the spectrum of gay men, yet never pandering to the tiresome gay stereotypes that plague characters today, these groups of friends sincerely seem that, with all the emotionally tense undercurrents that come with such a group.
I truly enjoyed the film, and its many quiet moments of poignance, mostly centering around John Mahoney's character. He plays the emotional heart in the center of the film, a fountain of knowledge, a bastion of acceptance. When the characters drop their attitudes and talk from the heart, there is a honesty to this film not often found in the gay genre. I was particularly touched by one little speech where the character rambles on honestly about his feelings....
Sure, there is some usual stereotypical fodder: drug use, angery lesbians, clubbing, and a slight but fun nod at drag queens. What bothered me most is that it seems that most gay movies are either set in LA or NYC... which assumes that only gay life occurs there.
However, this film pleases, is cute, touching, with a dash of drama. Plus, with all the bonus stuff, it makes a good DVD.

Lavoris L'OrealReviewed in the United States on June 6, 2021
2.0 out of 5 stars
Cattiness Without Charm Or Humor
Verified purchase
I quit this film after 15 minutes. It's attempting to be a gay version of "The Women," with lots of fast catty banter, but it came off as just abrasive and sad. If it's a movie about heart, I never saw the heart or the charm.
See all reviews
Back to top
Get to Know Us
Make Money with Us
Amazon Payment Products
Let Us Help You
EnglishChoose a language for shopping. United StatesChoose a country/region for shopping.
© 1996-2021, Amazon.com, Inc. or its affiliates