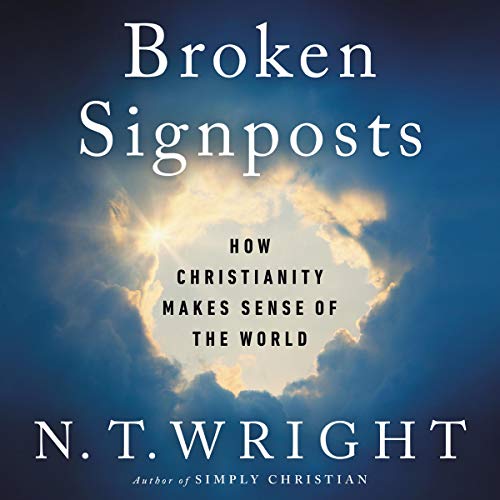 Broken Signposts: How Christianity Makes Sense of the World

List Price: $23.95
You Save: $2.99 (12%)
By completing your purchase, you agree to Audible’s Conditions Of Use
Sold and delivered by Audible, an Amazon company
Share

4.7 out of 5 stars
4.7 out of 5
229 global ratings
How are ratings calculated?
To calculate the overall star rating and percentage breakdown by star, we don’t use a simple average. Instead, our system considers things like how recent a review is and if the reviewer bought the item on Amazon. It also analyzes reviews to verify trustworthiness.
Top reviews

R McBurnett
5.0 out of 5 stars Seven Themes
Reviewed in the United States on November 23, 2020
Verified Purchase
NT Wright broke onto the scene for non-academic with his book Simply Christian. In this book, he expands four themes (spirituality, justice, relationship and beauty) which are innate to all people to include three more (freedom, truth and power) and redefines them as signposts to Jesus the Christ, sign posts which in this broken world are also broken. He brings it all to light in an easily followed manner through the lens of the Gospel According to John. Outstanding.
Read more
10 people found this helpful
Helpful
Report abuse

Dan Lawler
2.0 out of 5 stars WWJD
Reviewed in the United States on August 12, 2021
Verified Purchase
N. T. Wright claims to have answers to all the big questions of life … or at least seven of them. By probing down below the surface “to see things the way God sees them,” Wright mines for us the golden truths that make sense of those innate human longings for universal ideals of justice, love, spirituality, beauty, freedom, truth and power. Wright knows why mankind has failed to realize these ideals in the past, and what must be done to manifest them in the here and now. You could hardly ask for anything more than that, so let’s take a look!

Does the esteemed professor really have nothing more to offer than the ’90s youth group fad bracelets “What Would Jesus Do”? If he does, I really couldn’t find it, notwithstanding Wright’s repeated proclamations that he is providing “fresh and unexpected insight,” and “fresh, creative ways forward,” and a “fresh understanding of the way the world is,” and a “fresh vision of spirituality” and a “startling fresh reality.” While the book may have lots of freshness stains on the outside, its just stale donuts on the inside.

Besides the banal message, there is a serious flaw in Wright’s methodology. If you are claiming that the answers to man’s existential questions are all in the Bible, its incumbent that the Bible be presented as authoritative, especially in these postmodern times when all metanarratives are suspect and postmodernism itself admits of a “legitimation crisis.” But Wright does not do that. To the contrary, when it comes to Scripture, he essentially adopts Bruce Lee’s maxim on the martial arts: “Absorb what is useful, discard what is useless, and add what is specifically your own.” Wright’s ultimate authority is N. T. Wright, and that won’t cut it for most people.

Finally, Wright just can’t put out a book anymore without taking shots at the Christians he most despises, namely, those who have a present hope in the imminent return of Jesus Christ, and those who believe their sins have been forgiven by Jesus’ atoning sacrifice on the cross. In mocking the latter in a recent book, History and Eschatology, he recast John 3:16 as stating: “God so hated the world that he killed Jesus.” Here he dials it down a bit by simply characterizing Biblical accounts of sacrificial atonement as ancient Israel’s misguided co-opting of pagan cultic practices.

As to those who look for Christ’s return, Wright dismisses their hope as escapist and claims they are shirking their obligation to transform the present world into a Christian utopia. Wright’s Prime Directive to followers of Jesus is to “bring the new creation into existence.” This type of talk calls to mind Friedrich Holderlin’s caution: "What has always made the state a hell on earth has been precisely that man has tried to make it his heaven."

I, for one, am not confident enough in Wright's supreme authority to want to live in a world of his making. To use his metaphor, while he's supposedly fixed the broken signposts, he's still not got them pointed in the right direction.
Read more
3 people found this helpful
Helpful
Report abuse

Kathryne Snodgrass
5.0 out of 5 stars Spot on
Reviewed in the United States on November 9, 2020
Verified Purchase
Thought provoking, erudite, inspiring. A must read for living in today's world. Easily understood by all people of fAith. Highly recommend
Read more
5 people found this helpful
Helpful
Report abuse

Willem Lategan
4.0 out of 5 stars Very good
Reviewed in the United States on December 6, 2020
Verified Purchase
A very good exposition of the gospel of John for the contemporary cultural setting. I highly recommend this read to both Christians and sceptics.
Read more
4 people found this helpful
Helpful
Report abuse

Bluejei
5.0 out of 5 stars Brilliant!
Reviewed in the United States on January 1, 2021
Verified Purchase
A truly illuminating book on why certain principles we hold dear and at times fight for are real but doesn't seem to be working and and why they are broken signposts pointing to the real thing.
Read more
One person found this helpful
Helpful
Report abuse

bt4god
5.0 out of 5 stars A great way to think about the brokenness of our world.
Reviewed in the United States on March 14, 2021
Verified Purchase
NT Wright points out how our natural Human longings point to a good and loving creator God who is making all things new in Jesus’s work in the cross. Love it!
Read more
One person found this helpful
Helpful
Report abuse

mintyone
5.0 out of 5 stars A must read for us who want to make sense out what’s happening in our world
Reviewed in the United States on July 1, 2021
Verified Purchase
Best biblical explanation for, and response to, the uncontrollable situations in life
Read more
Helpful
Report abuse

Sman44
4.0 out of 5 stars My favorite of the books I have read by N.T. Wright
Reviewed in the United States on January 28, 2021
Verified Purchase
I have probably read 10 of his "shorter" books and this is my favorite of those so far. Well worth the time.
Read more
Helpful
Report abuse
See all reviews

knightday1973
5.0 out of 5 stars Uncovers the undercurrents of what we want put in the world right
Reviewed in Canada on February 24, 2021
Verified Purchase
Great book as usual from NT Wright.
Not overly complex but deep and refreshing. Even for the well read Christian the author brings together the deeper thoughts of John. He brings the intuitive deep thoughts of what we know is wrong with the world, shows them in John, and what Jesus thought and did and is doing about them in a profound way. Highly recommended.
Read more
One person found this helpful
Report abuse

Andrew the Canadian
5.0 out of 5 stars Broken Signposts point to the Christian hope.
Reviewed in Canada on May 26, 2021
Verified Purchase
A penetrating book through the lenses of the Gospel of John! Love the insights and challenge therein!! Worth a read.
Read more
Report abuse

Harry Cuthbertson
5.0 out of 5 stars Very very good
Reviewed in Australia on December 18, 2020
Verified Purchase
This book is a very easy read and is brilliant
Read more
Report abuse
See all reviews
Back to top
Get to Know Us
Make Money with Us
Amazon Payment Products
Let Us Help You
EnglishChoose a language for shopping. United StatesChoose a country/region for shopping.
© 1996-2021, Amazon.com, Inc. or its affiliates