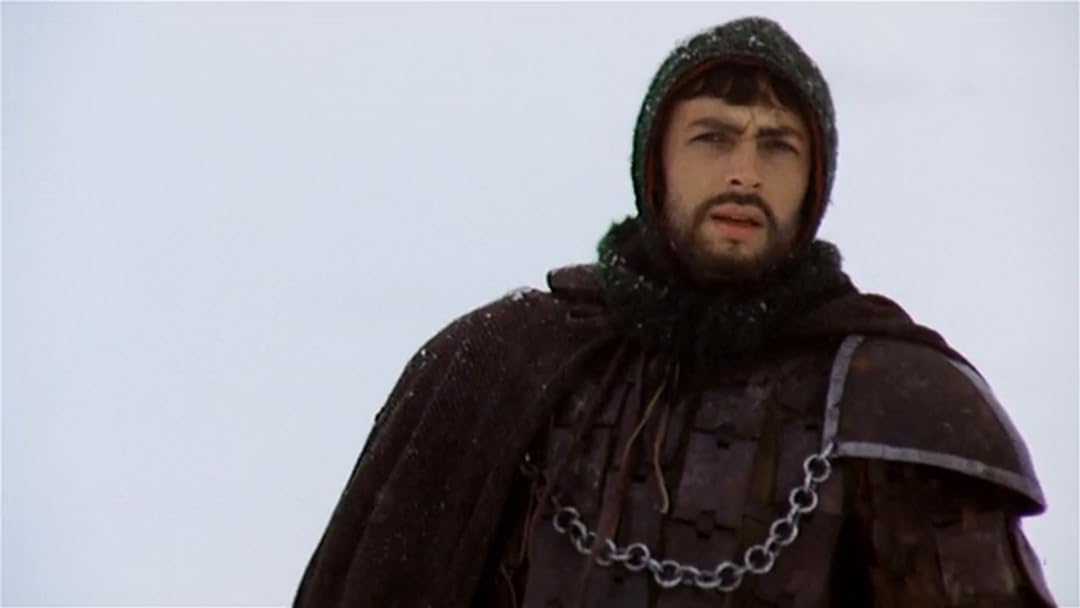 (1,568)
7.22 h 1 min1972PG
St. Francis of Assisi was an extraordinarily complex and difficult figure whose effect on his contemporary society was electrifying.

KurganReviewed in the United States on August 24, 2019
4.0 out of 5 stars
Wide Eyed Imaginative Portrayal of a Radical Saint
Verified purchase
This is a very soft, brilliant, colorful movie, full of music and visual splendor. I wasn't sure what I expected... having heard about it for years before finally watching it... maybe some kind of hippie revisionist play a bit like "Godspell" but I was pleasantly surprised. Saint Francis of Assisi didn't start out as a wandering preacher monk, as many know. Rather, he was a spoiled medieval rich kid who decided to reject that life for a radical interpretation of the Gospel of Jesus Christ, and became the founder of a new religious order (the Franciscans) which was dedicated to living in the world, preaching in unusual circumstances to any who would listen and advocating for the poor (while living as beggars themselves). There is much artistic license in the movie, especially in terms of the costumes and armor, which are beautiful and sometimes look more like something you'd see in an expensive stage production rather than something modeled after real history. Francis (who is always referred to as "Francesco" in the movie's dialogue) comes across as eccentric, even insane at times, but in a "good" way if that makes sense, that his choices, while risky, aren't self-destructive or evil, but serve to make him a happier person and shock those around him into re-thinking their own lives. There is no drug use in this movie, rather the faith itself is the "drug" that allows Francis to break free from the life that was suffocating him, forcing him to be afraid and apart from the poor and even to idolize war. The movie has a subtle anti-war message when it portrays Francis being hyped up to go off on Crusade then fleeing back disillusioned. There is some rear nudity in the film (but it serves a purpose... Francis dramatically casts off his possessions including his rich clothing and piles it at the feet of his father, indicating his rejection.. for the sake of his own soul, of worldly luxury). The movie doesn't definitively tell us that God is real or that Francis is really being guided by him, but everything is portrayed almost like a dream, more real than real, and the viewer is left to see Francis as somebody that could be any one of us, and certainly someone who could inspire us to be more caring, more willing to share, and more willing to serve rather than be served. Life is seen as something beautiful when people recognize the worth of each other and love, not in a selfish way.

Francis teaches celibacy as a very good thing, but he also lets a brother go from the order when he sees that the man is struggling with chastity (the brother glimpses a mother wearing a loose top caring for her baby and becomes depressed). Francis here affirms the good of marriage and tells the brother that if everyone was celibate, the human race would die out, and sends him off with his blessing.

Francis also has a relationship with Clair, but it is not a sexual one, though it begins with a bit of flirtatiousness, it is more like that of a brother and sister, or good childhood friends. Clair too sees the call of Francis to a radical life of service to the poor and rejection of worldly goods and though the movie doesn't go into detail, is the co-founder of the order and a leader for the women.

Another stand out scene occurs near the end when we see Sir Alec Guinness portray the Pope. He is a mysterious figure, who seems engulfed in a sea of clergy who appear to be corrupted by the world and blinded by wealth and class from seeing what is truly important. The Pope seems in a trance, or like a stone statue, then comes to life at a moment to investigate Francis, who has been summoned... possibly suspected as being a heretic for his radical life that has caused upset in the country. But the Pope seems to recognize the Holy Spirit in Francis and gives him a blessing... he even bows down and kisses his feet which shocks his court. One jaded priest whispers to another "don't worry, his holiness knows what he's doing... Francis will bring the poor back to us." Shortly thereafter the movie ends. It doesn't cover the time period of the intense suffering of Francis near his death and little is made of his stories of preaching to animals or his stigmata (though there is a brief hint about it if memory serves).

This is a beautiful and inspiring movie, even if it may be a few parts imagination mixed with history, and this can have appeal to a person who is not Catholic, though an atheist viewer must have a harder time accepting it. Viewers who enjoyed this are encouraged to pick up a biography of St. Francis of Assisi to learn more.

Judith ConnorReviewed in the United States on December 11, 2021
5.0 out of 5 stars
Meditative and Deeply Moving
Verified purchase
I know this movie took many liberties with the life of St. Francis of Assisi and St. Clare as well. But what this movie said to me is that Francis made a total gift of himself to God and was therefore able to be the channel of peace for so many around him and down through the ages. I read the life of Francis of Assis when I was in my twenties. At that time, I was working at a video store as a second job and I found this movie while cleaning the shelves. I had no idea that such a movie had been made. It was because of Francis' life that went on to read, and enter into the lives of so many other saints who've gone before us. I entered religious life just over a year later and that was almost 28 years ago. What a gift Francis' life has been to mine, his love of God reaching across space and time to touch me and say that I too can live a life of prayer and community and service. I watched this film again tonight and I am again renewed. Blessings to anyone who is reading this now. Blessings on you and your life.
10 people found this helpful

John D. GardnerReviewed in the United States on September 8, 2019
5.0 out of 5 stars
One in a Million!
Verified purchase
For the first 25% of the movie, I was confused, and almost ended it. But let me tell you, this is one very powerful movie, so grab a cup of strong coffee, set your attention span to max, and hold on to the end. This movie is in its own category.
24 people found this helpful

Christ MReviewed in the United States on March 13, 2021
5.0 out of 5 stars
Real Spiritual Teaching Lived!
Verified purchase
This has been one of my favorite spiritual movies since I saw it some time within the last 16 years. I am not a follower of organized religion. I am a universal monk, as St. Francis was, which most people don't know much about.

There's a lot here which many will find difficult to understand without research, but this is a real saint and example of real spiritual principle truly lived. Besides Buddha and Jesus the Christ, this is the most powerful spiritual character example I have seen portrayed in movie form.

I intend to make films like this myself one day, and highly recommend it to anyone who wants to learn about and see real life examples of people who actually live real spiritual lives in meaningful ways.
6 people found this helpful

Tony RobbinsReviewed in the United States on June 17, 2021
5.0 out of 5 stars
I have been looking for this movie
Verified purchase
I am totally bias when it comes to this review, and that is because I LOVE this movie. It always makes me cry with joy. Yea...Yea...it is a catholic religious film (and I'm more a spiritual person) but I can see the spiritual nature in this movie and appreciate it on that level. I especially like the lyrics in some of the songs...."If you want to be set free, take your time, go slowly. Do few things but do them well..." have helped me focus and complete a task well instead of doing many tasks poorly
3 people found this helpful

MadleyReviewed in the United States on May 3, 2022
3.0 out of 5 stars
Beautifully filmed, but not the whole story
Verified purchase
The film itself is a bit sanitized and takes hollywood story telling privilege from what really happened - the story is far more intense than this glamorized version of history, but having just visited the spiritual and stunning Assisi, I wanted to get more of the story that I may have missed in my travels of this magical city, this was a lovely film to watch but was not everything I was hoping it to be, THIS would be a great remake, a deep and thorough story-telling of this moving and legendary St Francis and the wonderful work this incredible soul achieved in his lifetime.
One person found this helpful

Katherine W.Reviewed in the United States on November 28, 2022
5.0 out of 5 stars
Beautifully made
Verified purchase
I watched this movie this week. It was easy to watch, difficult to really engage with. I understand why Zeffirelli made it. It's a visually stunning piece of film. I'd watch it again, with no dialogue, just to enjoy the beautiful photography and the score. I did not really enjoy the director's take on any of the famous people involved. I am not Catholic, so it may play a part in my opinion. I understand that a storyline *must* be created for a film, and tried very hard to let go and enjoy. Some scenes are easier to ignore and enjoy than others. Some are laughably unlikely. All in all, it's an interesting but very incomplete account of a fascinating founder of a new line of thought in a very old religion.

olderreviewerReviewed in the United States on April 19, 2021
5.0 out of 5 stars
Very well done film showing the rebirth or transformation of the individual.
Verified purchase
I really enjoyed this movie. It had some minor flaws but the sum total at the end left me overwhelmed. It showed the transformation or rebirth of an individual, St. Francis in a moving way. Even though most would not choose the life he chose---extreme poverty, chastity, service to those in greatest need---the viewer is made to feel that St. Francis was truly happy in his choice. Left me with many things to think about. I would say it is definitely one of my favorite films.
2 people found this helpful
See all reviews
Back to top
Get to Know Us
Make Money with Us
Amazon Payment Products
Let Us Help You
EnglishChoose a language for shopping. United StatesChoose a country/region for shopping.
© 1996-2022, Amazon.com, Inc. or its affiliates