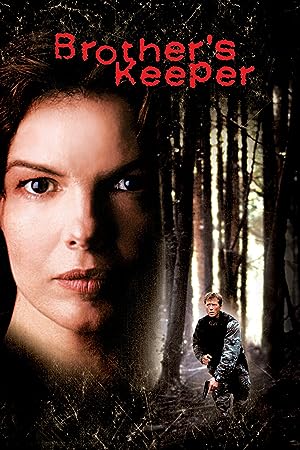 (10)
1 h 26 min2002R
An ex-cop covers for her mentally ill brother's crimes. As his apparent involvement in a murder she is investigating grows, she discovers how far she'll go to protect him.

trebeReviewed in the United States on December 31, 2002
3.0 out of 5 stars
Blame it on Dad...
Brother's Keeper is a made for cable TV production for the USA Network. Jeanne Tripplehorn is Lucinda Pond, a former member of the Portland Police, with a number of personal issues. An incident where an innocent man is killed by mistake, causes her leave the force. But she is drawn back to help in an investigation of a series of brutal murders, in which her brother is the prime suspect.
Tripplehorn is believable, as a ragged, close to burned out cop, forced back to reality by the need to bring her brother Ellis (Corin Nemec) to justice. The build up of Ellis, as a criminal mastermind, is a bit overdone, though there is no doubt that he is capable of some extremely gruesome acts. The violence is toned down for TV, and the mayhem is hardly shown, only the grim results. All this carnage, is the result of a troubled childhood, and an abusive father. Very convenient.
Using her insight, Detective Pond is convinced that her brother is "trying to tell her something" with his acts. She must operate with a FBI agent (Evan Dexter Parke) who is not quite convinced she belongs on the investigative team. He becomes her partner for a showdown in the woods with Ellis.
Veteran director, John Badham (Point of No Return) handles matters capably. Brother's Keeper does not have a lot of tension or suspense, and it saves what little action there is until the end. The cost may be a little steep, for a TV type thriller that does not rise very far above average.

Kindle CustomerReviewed in the United States on May 31, 2003
1.0 out of 5 stars
"a brother is born for adversity"
Stunningly bad drama that I suggest you do not bother to waste your time with.
Lucinda Pond had overcome an abusive childhood with her single parent father. She became a successful Police officer, and used no small amount of her time protecting her baby brother Ellis from the repercussions of his petty crime, a habit developed from her taking care of him during their childhood.
Lucinda's world came apart when she led a "ruby-ridge" style raid that leads to the death of an innocent man rather than the serial killer she was trying to capture. She leaves the force, takes up drinking, and abandons her husband and child.
Almost four years later some one is copycatting those murders and Lucinda is brought back onto the force against her will to help track down the killer. In no time it all she figures out that it is her wayward Brother, Ellis. She also realizes that this is another of the many games and puzzles that the two siblings shared growing up. He leaves her clues and she is to use their common history to decipher them and hunt him down. Ellis's goal is to "free" her from having to protect him by killing so very many people that Lucinda will be forced to kill him. A plan she does not intend to follow through on.
As the bodies and the clues mount, Lucida is forced into a confrontation with Ellis and a choice that only she can make.
Now, I like movies about siblings who are forced into murderous situations with each other as much as the next person, BUT this movie was just a waste of time.
There was NO suspense. There was no emotional involvement with any of the characters and honestly you could pretty much see exactly where everything was heading from about 15 minutes into the movie.
My only regret is that I didn't have enough sense to turn the VCR off at that moment and just take the tape back. My advice to you is to not even bother to get the tape in the first place.
12 people found this helpful
See all reviews
Back to top
Get to Know Us
Make Money with Us
Amazon Payment Products
Let Us Help You
EnglishChoose a language for shopping. United StatesChoose a country/region for shopping.
© 1996-2022, Amazon.com, Inc. or its affiliates