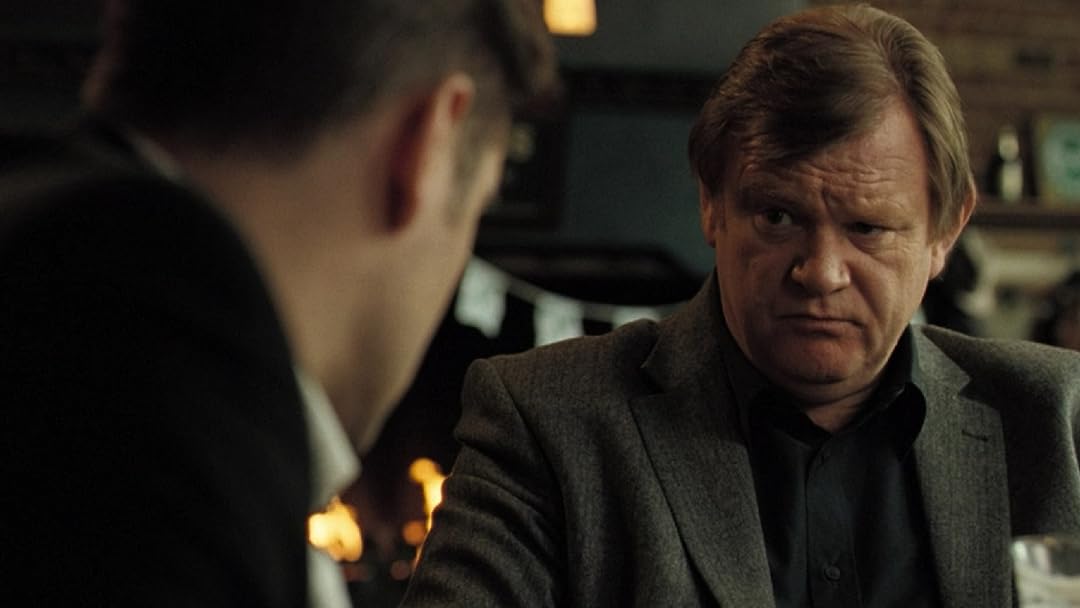 ChrisSherrillReviewed in the United States on October 5, 2021
2.0 out of 5 stars
Not a five star movie - more like one and one-half
Verified purchase
Language will be offensive to many.
Is this supposed to be a comedy of some sort? It is not a comedy.
There is a lot to dislike here. The first thing to come to mind is the extreme prejudices tossed around like confetti. Lots of what is now called hate speech. To be fair, nearly everyone is slammed - blacks, whites, little people, Dutch people, Pakistani people, Americans, and on and on. Not funny. Next, the language is horrible as the F word is interlaced through most of the dialog. The production values were pretty high, but the plot was weak and the movie plodded along for the better part of the first half. The movie is sad and depressing. All in all, if you never watch this movie, you will be no worse off and maybe even better off.

Jon WatersReviewed in the United States on December 20, 2018
5.0 out of 5 stars
Colin Farrell Fights His Demons
Verified purchase
Martin McDonagh's (Three Billboards Outside Ebbing, MO) brilliant film In Bruges (2008) finds young wannabe gangster Colin Farrell in a state of medieval hell (figuratively and physically, since the medieval town of Bruges is saturated with Bosch-like images of devils, gargoyles, and tortured souls), as a result of a botched murder of an adult Catholic priest that also kills a 6-year old child. In the opening soliloquy, Ray (Colin Farrell) voices over the panorama, "Get to Bruges - I didn't even know where Bruges was." It's a descent into hell ("I know Bruges is gonna be a s**hole"), and in an ironic twist, it's Christmas time - all the hotels are fully booked, and Ray has to spend two weeks in one room with his mentor and gangster-guide Ken (Brendan Gleeson) (- the way of all learning, young gangster meets old gangster).

Ray hates history ("It's all a bunch of stuff that's already happened") but he loves that a film crew is filming a fantasy-scene in Bruges ("Homage is too strong" a description, says Chloe) complete with medieval costumes, gargoyles and a dwarf (Jordan Prentice). Ken, on the other hand, loves the history, and he takes Ray to see the medieval Church of Christ's Blood with real blood brought back by the Crusaders many centuries ago. There's a medieval fresco of the final judgment on earth, with heaven, hell, and purgatory and tortured souls ("The afterlife, God and sins and hell and all that!"), which Ray approves of, saying, "The rest (of the paintings) were spastics, but this is quite good!" Ray also has a fascination for dwarves (“They tend to commit suicide”), which leads both to a tryst with Chloe (the stunning Clemence Poesy), a local drug dealer, and to various encounters with Jimmy, a dwarf who is acting in the film, and who is taking ketamine sold to him by Chloe (curiously, ketamine is a pharmaceutical remedy for depression, which both Jimmy and Ray are suffering from). Sensing Ray's profound depression and in an act of selfless charity, Ken puts Ray on a train out of town and tells him to find another young kid and help him, instead of killing himself.

High up on the medieval tower at the center of town is where the key action of the film takes place. Ken's boss, Harry (Ralph Fiennes) shows up to have a gun fight with Ray and Ken. It's a gangster shootout in quiet, medieval Bruges. This is Shakespearean tragedy, and many characters die in the final scene. In the last moments of the final scene, Ray voices over his own body being taken away by ambulance, "I guess hell is being in Bruges for eternity."

Colin Farrell appears in another black drama where he fights his demons. True Detective, Season Two, finds detective Ray Velcoro (Farrell) in his own personal hell after he kills the man he suspects of raping his wife, then becomes the toy of the gangster Frank Semyon (Vince Vaughn) who gave him the tip, only to discover that he killed the wrong man. The True Detective writers travesty Farrell's performance in In Bruges by having corrupt Vincy City detective Ray Velcoro be totally devoted to his geeky tweeny son, in effect providing the penance Farrell's character in In Bruges sought but was not able to accomplish. But his real penance lies in violence, and there's more than enough in the eight episodes of True Detective, Season Two.

It's a romance story, but not obviously so. Ventura County Sheriff's detective Ani Bezzerides (Rachel McAdams) has her own demons to battle, and she's a tough survivor with a martial artist's skill with a blade. Together they (and officer Paul Woodrugh - skillfully played by Taylor Kitsch) solve the deep corruption and violent reprisals that are rampant in the City of Vincy's upper echelons. It's fate, and in one memorable scene Ray and Ani break down all the barriers to their individual hells and connect beyond time and place.

These are great actors playing parts written by very sharp writers. Check them out.

I.m.shopperReviewed in the United States on August 31, 2021
1.0 out of 5 stars
Garbage
Verified purchase
Two murder for hire assassins stuck in Bruges waiting for instructions. Unlikeable characters and the town is shown in the worst possible light. Junk movie. No redeeming features of the characters, the plot or the city.
7 people found this helpful

CherryMReviewed in the United States on September 11, 2021
3.0 out of 5 stars
Beginning is slow... but Colin Farrell
Verified purchase
Warning - Other posts give away the entire movie so don't tread too far if you want to absorb this on your own.. It's beyond me why people do that!

Old movie so expect some things that seem off color by today's standards. Heavy accents required CC and rewinding here and there so I could understand what they're saying. Pretty boring at first, something horrible happens around 24 mins in. Then we watch a couple assassins sitting around in a small Belgium town waiting for a phone call as to their next moves from their (boss). Around 41 mins in there's a twist.

At one point it looked like it might take a somewhat humorous lighthearted turn but sadly that turned out not to be the case.

If you can survive the 1st 41 minutes you'll enjoy the rest of the movie. (though I'm not sure 'enjoy' is the right word to use)
2 people found this helpful

SCReviewed in the United States on September 4, 2021
1.0 out of 5 stars
One of the worst movies I’ve seen recently
Verified purchase
Tragic, boring, worst movie ever seen this year. Who are these reviewers that give it multiple stars????
6 people found this helpful

JermsReviewed in the United States on August 14, 2020
5.0 out of 5 stars
Classic
Verified purchase
Okay, so, as the kids say, aspects of Farrell's character here haven't exactly aged well. We have a harder time laughing off casual bigotry as one of our beloved-but-flawed-hero's "quirks", and this might ruin this film for some viewers--and that's fair enough. Society evolves, we stop being cruel and laughing at cruelty towards others. Deal with it. But, that aside--this film is something special. Its hilarious anti-heroes, two Irish hitmen, are the best on-screen male duo in recent memory. Fiennes gives clearly one of the greatest performances of his career! But its perhaps concept of "Bruges" as a character, a motif in itself, that takes this film to a higher level, a place of stately old European dreams and "fairy tales", but in actuality, yes a "sh*thole" with a seedy side. The plot is very engaging, in turns comedic and quite dramatic, and themes of guilt and redemption draw us into the ALL of the characters, interestingly. My one gripe... I HATED the music during the ending "action" sequence, surprisingly cliche for such a good piece of film-making. It didn't feel like the type of film that would have a chugging electric guitar-laden chase scene, but, there it was. Oh well. Still 5 stars, all the way!
5 people found this helpful

joel wingReviewed in the United States on July 12, 2020
3.0 out of 5 stars
Not what you expect when you hear the movie is about 2 hitmen
Verified purchase
In Bruges is an unlikely story about two Irish hitmen Ray (Colin Farrell) and Ken (Brendan Gleeson). Their boss Harry Waters (Ralph Fiennes) sends them to Bruges, Belgium to lay low after they screw up a job. The movie starts off as an odd couple, buddy film, and ends with the consequences of their sins as contract killers.

The characters are the first thing that stands out about In Bruges. Ray is immature and impulsive. When Ken wants to see all the medieval religious sites that Bruges is known for Ray gets bored, complains, kicks chairs, and wants to go. He’d rather do drugs, party and have sex. Ken is like the older brother who tries to enlighten his little brother Ray about the better things in life even if he resents it.

The theme is about the life of killers and is just as interesting. It also leads to a big action conclusion.

In between all that there’s some comedy thrown in as well. There’s a dwarf for instance that Ray is infatuated with which leads to some really funny moments.

Overall In Bruges is definitely a bit different from what you would think when you hear it’s about two contract killers.
C
2 people found this helpful

jerrycReviewed in the United States on September 9, 2021
5.0 out of 5 stars
SPOILERS**
Verified purchase
...and in the end... I was happy to see that the writers decided not to make him recover as would have been the case in 90% of the plots in this century. Of course, excellent acting by all involved. One flaw is that the Bruges' police were not around during the gunfights and suicide. But they were entered the train and brought him back to Bruges? Also, since I'm nitpicking, the gondola man never turned around even when shots were fired at his boat. All in All, excellent movie with great acting and writing.
One person found this helpful
See all reviews
Back to top
Get to Know Us
Make Money with Us
Amazon Payment Products
Let Us Help You
EnglishChoose a language for shopping. United StatesChoose a country/region for shopping.
© 1996-2022, Amazon.com, Inc. or its affiliates