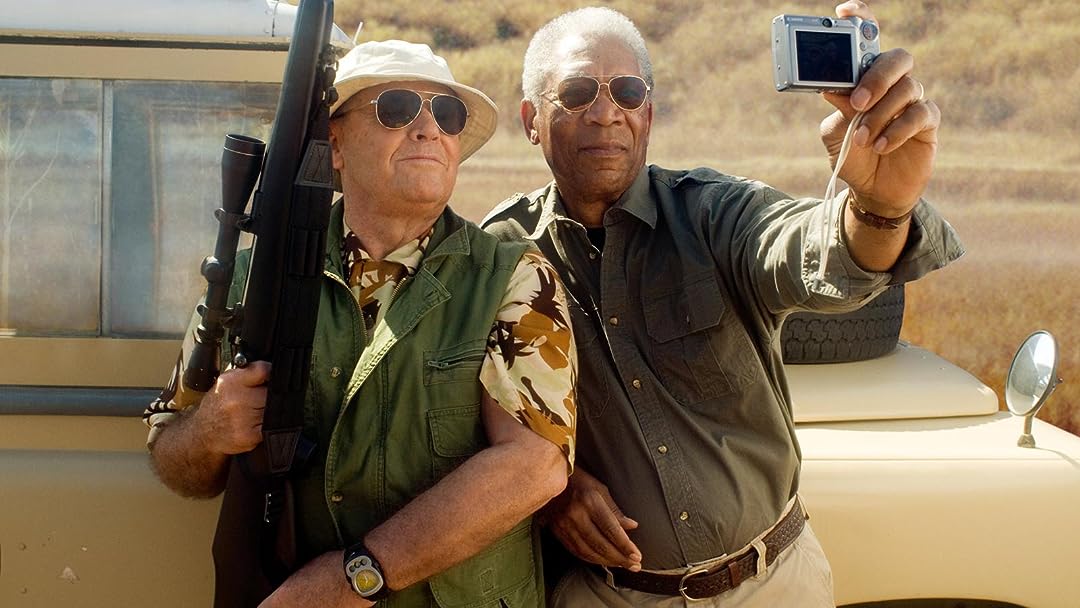 AllisonReviewed in the United States on April 3, 2022
5.0 out of 5 stars
A lot of meaning. “10”
Verified purchase
When a visiting friend said he’d ever seen this movie, I rented it for us to watch. My friend had been talking about materialistic things, and was minimizing the importance of family. In return, I made a comment about not ending up like “that scene from the Bucket list” where Morgan Freeman is surrounded by the joy of his family sharing a meal together, while Jack Nicholson is in his zillion-dollar home, alone with his TV dinner. That’s how I came to watch the movie, again, after having seen it probably a half dozen times already. It’s one of those movies that is worth watching again and again. Powerful message and lots of meaning. And the stars are A-list as well. I give it a 10.

I write honest reviews to help others make informed purchases because I read reviews myself and appreciate how helpful they can be. I hope that my review helped you!

DASReviewed in the United States on October 19, 2020
5.0 out of 5 stars
te uplifting movies of all time!
Verified purchase
One of my top ten favorite uplifting movies of all time! Whenever I choose to watch these two stellar performances by Nicholson and Freeman sharing this deep mutual bond 💗 as they face their terminal illnesses, it is like watching it for the first time. I gain new inspirng perspectives as to what matters most to me in my remaining time on this earth. This is why I love this movie. Very well scripted. Sean Hayes performance adds a fine element to the already fine dynamic duo.
2 people found this helpful

H.M.Reviewed in the United States on April 17, 2022
4.0 out of 5 stars
It was ok
Verified purchase
I am a huge fan of both actors, but I guess I was expecting something different. It was a good movie, but this was not my favorite movie. I was trying to decide if it was one that I wanted to buy because I couldn't remember whether I liked it enough to own it, but I have so many other movies I like better, I don't think I would watch it again enough to buy it. Renting it was good enough to make that decision.

Meredith MungerReviewed in the United States on February 17, 2017
5.0 out of 5 stars
Edward Cole finally finds the joy in his life
Verified purchase
Billionaire Edward Cole and working-class mechanic Carter Chambers are thrown together in a hospital room having nothing alike except for their terminal illnesses. While sharing a hospital room, finding out that they both have less than a year to life, they decide that they should make the most of the time that they have left. Chambers decides to make a bucket list, and Cole decides to jump in on helping to make the list. Throughout the movie, the two come together and travel the world to do the things on their bucket-list. Everything comes to an end when Chambers finds out that Cole has a daughter that he has been disconnected with for a long time. After not talking for awhile, Cole is asked to speak at Chamber's funeral. Cole decides that he will cross off another item on the list. The end of the movie shows that both of the men, after passing away, finished the bucket list and got buried together. Edward Cole finally finds the joy in his life, as Carter Chambers changes a stranger's life forever. - written by Maddie S., a student in my creative writing class.
11 people found this helpful

CHETReviewed in the United States on October 19, 2019
1.0 out of 5 stars
maybe bootleg ?
Verified purchase
Movie was good but in my opinion i think this was a bootleg copy. I bought this used from a so called charity industry store, never again. I can't tell how to determine if this is a legitimate copy or not, but for a couple of dollars not worth returning.
There was no beginning menu it went straight into the movie. I was able to find a menu after it started.
I don't think I'll be buying used again. As for the seller hard to tell if they had anything to do with quality of this disk.

TonyReviewed in the United States on May 18, 2021
5.0 out of 5 stars
What a great pair!
Verified purchase
When two legends are given the stage, its amazing how enjoyable the flic. Although a serious and somber topic, the two characters make you love them through their trials, failures and even death.

Garden Doug Reviewed in the United States on March 22, 2021
4.0 out of 5 stars
Not what I expected ~ Great Drama 🎭
Verified purchase
GR8 movie 🎥 well written script ~very good casting/acting/ending! Blu-ray Tm disc had a “grade B” picture clarity/quality of 16 to 30 MegaBitsPerSecond ~ a “Grade A” BD rom is going to clock in at the mid to low 30’s MBPS buy a Blu-ray ~play the lottery?!
One person found this helpful

L. OwensReviewed in the United States on September 7, 2015
5.0 out of 5 stars
You know when they have forms that ask you what your favorite movie is
Verified purchase
There is just so much to say about this film, that it would take too long to say it.

You know when they have forms that ask you what your favorite movie is?

I can't think of why i never remember to say this movie.

In the dog eat dog and pony show world that this is rapidly becoming... there is enough substance to carry me through it all.
You laugh, you cry, and you "GET IT" !

It is like Our Essence, that underlies it... it has it all ~

Kudos to every single person who had a part in the making of this movie.

May God Bless You .. i know He is well pleased !
5 people found this helpful
See all reviews
Back to top
Get to Know Us
Make Money with Us
Amazon Payment Products
Let Us Help You
EnglishChoose a language for shopping. United StatesChoose a country/region for shopping.
© 1996-2022, Amazon.com, Inc. or its affiliates