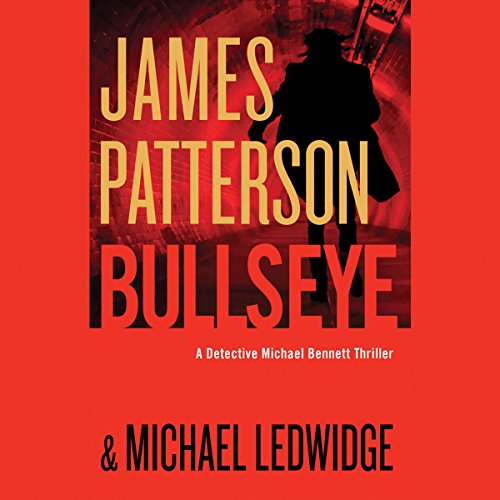 List Price: $30.79
You Save: $3.84 (12%)
By completing your purchase, you agree to Audible’s Conditions Of Use
Sold and delivered by Audible, an Amazon company
Share

4.6 out of 5 stars
4.6 out of 5
2,703 global ratings
How are ratings calculated?
To calculate the overall star rating and percentage breakdown by star, we don’t use a simple average. Instead, our system considers things like how recent a review is and if the reviewer bought the item on Amazon. It also analyzes reviews to verify trustworthiness.
Top reviews

Mercedes R.
4.0 out of 5 stars Better than the previous novel
Reviewed in the United States on July 30, 2020
Verified Purchase
Bullseye is the 9th novel in the Michael Bennett series written by James Patterson and narrated by Danny Mastrogiorgio. It was published on August 1, 2016, by Little, Brown and Company. I was able to read this book by audiobook by borrowing it from my public library on the Libby app.

This novel focuses once again on a case handled by Michael Bennett and his team of detectives. They are focusing on keeping the President of the United States safe from being assassinated. After one failed attempt, Bennett and his team get on high Alert to ensure nothing happens to him again. Meanwhile, Bennett and Mary Catherine start to get very worried about Brian and his friend Marvin, who seem always to be away from the house.

I enjoyed this book far more than the previous one, Alert. Bullseye had more of a more straightforward plot, a more natural structure to follow, and not many characters or villains to remember. There is also the enjoyment of getting more involved in Bennett’s personal life, such as the issues there are with Brian and his new friend Marvin, the growth of his relationship with Mary Catherine.

I also enjoyed the writing of the plot twists, which is typical for Patterson. He often writes events in ways to make you think something went wrong when it didn’t really. It is sporadic when it does go terribly. I think he tends to have a soft spot for his characters, and doesn’t like to keep kicking them when they’re down. I only have a hard time giving detective fiction or procedural novels, five stars since they can get repetitive and follow the same general plot.

I would rate this book as 4/5 stars. I would recommend this novel for Patterson lovers, fans of the Michael Bennett series, and readers who enjoy the mystery/thriller genre.
Read more
One person found this helpful
Helpful
Report abuse

Marilyn
2.0 out of 5 stars Very Disappointed
Reviewed in the United States on September 26, 2016
Verified Purchase
I always look forward to the Michael Bennett books. I was so excited when I saw it was available!! $14.95 for a $2.00 book. I am not happy. This was so poorly written, I can't imagine Patterson putting his name on it. An interesting premise but no follow through! A widowed NYC cop with 10 adopted kids, and a grandfather who is s Priest!! Every prior book I loved. So much interaction with the kids, his job, his nanny, and of course the wise grandfather/ Priest. None of that in this book. It didn't tie up any loose ends. It was just "rush the reader thru and get to the end"!! If I could get my money back I would. I'd skip this one. As the kids say, it sucked!!
Read more
14 people found this helpful
Helpful
Report abuse

Simply Beebe
4.0 out of 5 stars Doesn't Disappoint!
Reviewed in the United States on September 24, 2016
Verified Purchase
James Patterson et al have a winning formula to suspense novels. Bullseye fits the bill. I enjoy reading about Detective Mike Bennet and his family. I wish he would come to terms with his first wife's death due to cancer and finally get around to putting a ring on Mary Catherine who plays a pivotal role in his life and is much a part of his success with is work and family. This is a different review because I think if you read Patterson as much as I do .. Especially his series books, you know the formula minus a few twists but you really get to know and love the characters. His character development throughout each book is thoughtful and consistent. I think that is really what I love about his books.
Read more
11 people found this helpful
Helpful
Report abuse

TUCSON ROBERT
3.0 out of 5 stars I did love the short chapters
Reviewed in the United States on August 25, 2016
Verified Purchase
BULLSEYE by James Patterson and Michael Ledwidge is my 75th-plus Patterson generated novel and at least my tenth read starring NYPD Detective Michael Bennett. The book starts out with Detective Bennett getting involved with an assassination attempt on the new American president. Lot’s of technical details are built into the narrative as well as discussions on long range kill weaponry and even instructions on how an assassin sets up for a kill. As an aside, I have often wondered how the 10-kid Bennett family with a retired Catholic priest; the Irish lass, Mary Cathrine, chief nanny and cook, and family organizer with benefits; not to mention the occasional waif adopted off the street, manages to survive so well on a NYC public servant’s salary.Guess I'll never know that. I would place Bullseye in the middle of Patterson’s thrillers. As excitement goes—not at the bottom, not at the top. I did love the short chapters. I give Bullseye a 3-star rating.
Read more
6 people found this helpful
Helpful
Report abuse

R.H. McCort
3.0 out of 5 stars Not on of the best in the series
Reviewed in the United States on August 15, 2017
Verified Purchase
I have totally enjoyed the Michael Bennett series, except this one just didn't come up to my expectations. While I understand the concept of the idea, I had a hard time believing that Michael Bennett was the only one of the CIA, FBI and the rest of the "alphabetic letters" to come to the aid of the President. I also was disappointed that the "family" which is usually more involved in the story line wasn't. While I would hate for this series to end, I hope that James Patterson looks back on what made the series great to begin with and if there will be another book, more family and more Mike and Mary Catherine.
Read more
7 people found this helpful
Helpful
Report abuse

Kindle Customer
2.0 out of 5 stars Different Michael Bennett
Reviewed in the United States on February 1, 2017
Verified Purchase
This book seemed to be all about street names and corners and weapon types and descriptions and/or model numbers rather than story. The last quarter of the book is all that we really got excited about while reading. The rest of the book was just not up to par with the rest of the series. Please don't do this again as we really have enjoyed this series til this book. If you are reading this series skip this book. You won't be missing out on anything except the neck nuzzle on the last page.
Read more
9 people found this helpful
Helpful
Report abuse

texasbruin
4.0 out of 5 stars Michael Bennett does not disappoint
Reviewed in the United States on January 25, 2018
Verified Purchase
Bullseye is the continuing series about NYPD detective Michael Bennett. This book is about him working with the Secret Service in trying to prevent an assassination.

We go along with Bennett as he works with the Secret Service in trying to find a hired assassin before it to late. As with other Michael Bennett books, also will focus on his family life with his 10 kids.

This book is written in the usual James Patterson style, fast paced, small chapters. I found book hard to put down.

Recommend this book, not only to the James Patterson fans. But those who enjoy mystery/thriller books as well.
Read more
One person found this helpful
Helpful
Report abuse
See all reviews

Eve
3.0 out of 5 stars Good story spoilt by errors
Reviewed in the United Kingdom on October 13, 2016
Verified Purchase
I liked the story but found it hard to read with odd, hard to understand words splattered through it and the page before chapter 76 rambles and repeats then breaks off! I read JPs books as they are usually an easy read and I don't have to think too hard about but this was off kilter. Shame. 😞
Read more
11 people found this helpful
Report abuse

Amazon Customer
5.0 out of 5 stars It’s James Patterson. What more can I say!!!
Reviewed in the United Kingdom on November 9, 2018
Verified Purchase
I’ve read some stand alone books by James Patterson and I just love his Alex Cross books. So reading his Michael Bennett’s ‘Bullseye’ was a must. And I found myself reading till midnight knowing that I had to be up at 3 in the morning for work lol. But it was worth it.
Read more
2 people found this helpful
Report abuse

Barriet
5.0 out of 5 stars Back to Top Form
Reviewed in the United Kingdom on January 4, 2021
Verified Purchase
The last Michael Bennett story was disappointing and felt that the series may be losing steam.
Bullseye was a return to form, and I'm now looking to the next instalment.
Read more
Report abuse

Amazon Customer
4.0 out of 5 stars Confusing
Reviewed in the United Kingdom on May 29, 2018
Verified Purchase
I enjoyed this book but was put off initially by the constant jumping between indistinguishable sets of people. It broke the thread and therefore the linking that catches and retains concentration. It was hard to care until about two thirds in.
Read more
Report abuse

Pippa21
5.0 out of 5 stars If you love crime with a story this is for you.
Reviewed in the United Kingdom on September 5, 2018
Verified Purchase
I love James Patterson’s Michael Bennett series and have now read all the books, hoping for a new one soon. Interesting stories surrounding MB family and police work, can be quite gripping.
Read more
Report abuse
See all reviews
Back to top
Get to Know Us
Make Money with Us
Amazon Payment Products
Let Us Help You
EnglishChoose a language for shopping. United StatesChoose a country/region for shopping.
© 1996-2021, Amazon.com, Inc. or its affiliates