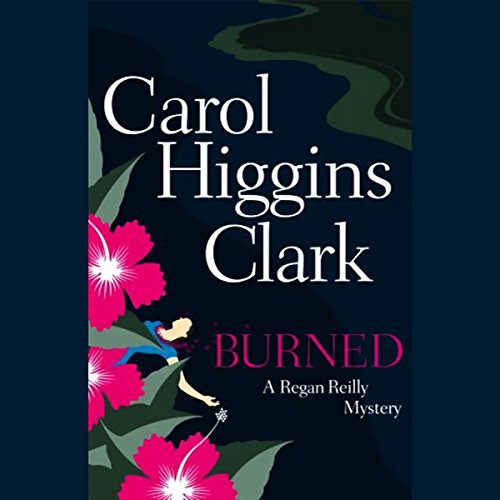 Carol Higgins Clark (Author, Narrator), Simon & Schuster Audio (Publisher)
4.5 out of 5 stars 384 ratings
See all formats and editions
Sorry, there was a problem loading this page. Try again.
When we last saw L.A.-based private detective Regan Reilly, she'd recently become engaged, but before the big event Kit convinces her to come to Hawaii for one last girls' weekend.

At the Waikiki Waters Resort, the body of Dorinda Dawes washes ashore. Around her neck is an exquisite and historically valuable shell lei that had been stolen from the Seashell Museum in Honolulu 30 years before. Will Brown, the manager of the resort, doesn't believe that it's an accidental drowning. In the three months Dorinda had worked in Hawaii, she had become a controversial character who had a reputation for pointing out the very worst in people. Will is afraid that she was murdered and that the murderer might still be in their midst.

Your audiobook is waiting!
Learn more about membership
List Price: $19.93
You Save: $4.98 (25%)
By completing your purchase, you agree to Audible’s Conditions Of Use
Sold and delivered by Audible, an Amazon company

Suesinger
5.0 out of 5 stars Great story. Always is from Carol Higgins Clark.
Reviewed in the United States on June 3, 2022
Verified Purchase
Interesting mystery. Didn't know who do it, had a few possibilities. Like the way it ended up. Those twins were rotting.
Read more
Helpful
Report abuse

Rosie
5.0 out of 5 stars Very Entertaining
Reviewed in the United States on August 30, 2017
Verified Purchase
It's a fast-moving and lively mystery story. I had to keep reading it. It made me laugh quite a few times. The characters were logical, and I appreciate that.

I'm a Jackie Collins fan, and I thought of her while reading this, because the writing style and chapter breakdown was strikingly similar to a Jackie Collins book. There were different character groups at the beginning of the story, and they all became associated later in the book; they all came together at the end of the book for a memorable blast and spectacular chain of events!
Read more
Helpful
Report abuse

VinoSucker
5.0 out of 5 stars Great Author
Reviewed in the United States on September 28, 2016
Verified Purchase
I love this author, her books are fun to read. The stories are evolved enough to keep your interest yet not predictable. I like how she manages to link it all together before you know it. It is fast read and offers hours of entertainment.
Read more
Helpful
Report abuse

NanaD
5.0 out of 5 stars completely entertaining
Reviewed in the United States on May 26, 2013
Verified Purchase
excellent read. although the author does not write the edge of your seat mystery story of so many others, she writes a highly entertaining story with twists and turns, Ms Higgins writes the ADULT NANCY DREW. If you enjoy mysteries, you will enjoy this and the other books in the Regan Reilly series.
Read more
Helpful
Report abuse

littleprinessmom
5.0 out of 5 stars So much for a bachelor's weekend
Reviewed in the United States on November 13, 2016
Verified Purchase
Reagan is off to Hawaii to joint Kit for a couple of days. Instead, she walks into her next case. Carol Higgins Clark is a great mystery writer. Her books are quick reads. I really enjoy reading them.
Read more
Helpful
Report abuse

Michele Hardesty
5.0 out of 5 stars Another great one from Carol Higgins Clark!
Reviewed in the United States on January 4, 2018
Verified Purchase
I couldn't stop reading! Had me from the beginning! Thought I had figured out the perp, but was wrong. Couldn't believe the ending! Great reading!
Read more
Helpful
Report abuse

Amazon Customer
5.0 out of 5 stars Best story.
Reviewed in the United States on December 30, 2016
Verified Purchase
This book deserved this rating as each chapter makes the plot more interesting. You feel as if you are in Hawaii enjoying the sun, surf and sand.
Read more
Helpful
Report abuse
See all reviews

E. Heckingbottom
3.0 out of 5 stars Light reading - a good beach book for those who want a light mystery
Reviewed in the United Kingdom on June 3, 2007
Verified Purchase
This is one for those of us who enjoyed Nancy Drew and Hart to Hart as children; are happy to watch Miss Marple and Murder She Wrote for light entertainment; have the ability to suspend a certain amount of disbelief; and enjoy the occasional light, easy book - hence the fact that it is perfect beach reading, as it certainly does NOT need much concentration!

In many ways, the writing style and the main protaganist reminded me of the afore-mentioned heroine, and I found this to be an enjoyable but very light book. (I have ordered 2 or 3 more by the same authoress for my long Summer break!)

In this book, the heroine, Regan, ends up in Hawaii for a long weekend in January - the result of snow preventing her from flying to New York to join her fiancee. Needless to say, murder, mystery and mayhem persue her as other criminal activities come to the surface - a missing shell lei that turned up around the deceased persons neck; a mysterious boyfriend who is courting one of Regan's closest friends; a mysterious legacy that allows a group of people to make regular trips to Hawaii, but which appears o be running dry - to mention but a few!

By the end of the book, all is sorted out satisfactorily (sort of) and we are left waiting for more on a similar vein - including looking forward to Regan's wedding and all its details!

If you want a light read, go for it! If nothing else, it will leave you wanting to know more about Hawaii and its islands! However, don't expect the quality of writing that you get from the author's mother. Carol still has a lot of maturing to do as a writer, and it's clear who does the final drafting in the books that mother and daughter write together!
Read more
2 people found this helpful
Report abuse

Mrs R
5.0 out of 5 stars Loved this book!
Reviewed in the United Kingdom on September 26, 2016
Verified Purchase
This book is quite long, which was really nice as it didn't cost that much. The story line is good with more than one storyline coming together for the denouement. I have read a number of the Reagan Reilly books and really enjoy them. They are fun murder mysteries that won't give you bad dreams! Perfect for holidays and mums who want to relax without anything that's too heavy going.
Read more
Report abuse

rita
5.0 out of 5 stars good read
Reviewed in the United Kingdom on February 4, 2014
Verified Purchase
Her books are very entertaining and have a feel good factor because they always have a good ending.
Unrealistic and tongue in cheek.
Great for round the pool on holiday when you don't want any thoughts to spoil your fun!
Read more
Report abuse

lyntrom
4.0 out of 5 stars Easy read on a cold winter's night
Reviewed in Canada on January 31, 2017
Verified Purchase
A snowstorm in the northeast prevents PI Regan Reilly leaving LA to join her fiance for a few days together. Instead she finds herself flying to meet a friend in Hawaii who invites her to share her room while there at a conference. When the body of the hotel photographer washes ashore wearing a Hawaiian necklace that was to be auctioned at a gala charity event on the weekend, the hotel manager engages the help of PI Reilly to find out if this death was really an accident as reported by police or a more sinister murder.

The story reminded me of the Nancy Drew mysteries that I loved to read in my teen years. It was a good story set in the beautiful Hawaiian islands which I especially enjoyed reading while the snow flurries fell outside.
Read more
Report abuse
See all reviews