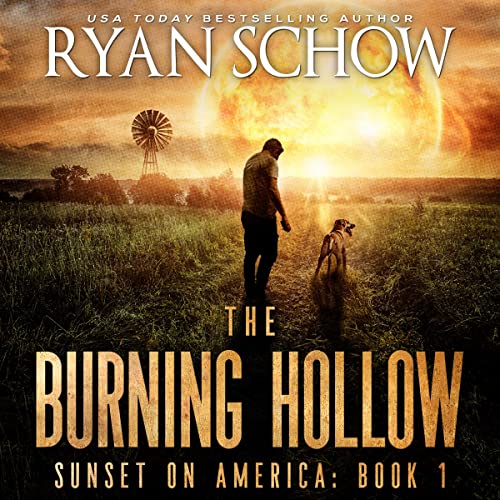 Ryan Schow (Author, Publisher), Kevin Pierce (Narrator)
4.6 out of 5 stars 688 ratings
See all formats and editions
Sorry, there was a problem loading this page. Try again.

…tucked into the Tennessee holler.

Is this Rowdy Banks’ best chance of surviving the EMP?

In the near future, in the picturesque town of Burning Hollow, Tennessee, a century-old squabble between two families is brewing. For four generations, blood has spilled between the patriarchs, shifting the tides of power. But after each significant change, a new war begins.

Rowdy Banks is grinding out the most challenging day of his life when his run of bad luck worsens. Despite a collapsed economy, or because of it, Rowdy feels it’s time to close old wounds. If he returns to Burning Hollow, a town from which he was exiled, he must answer for his past. It’s not wise to ruffle so many feathers; he’ll kick the hornet’s nest instead.

But then she shows up and sparks a bonfire.

Chloe Bickmore and 11-year-old Evie are sneaking into Burning Hollow when they are attacked. While one fights for her life, the other holds the key to Rowdy Banks’ salvation. Desperate, scared, and on the run, Chloe cannot imagine the danger that lies before her, nor does she realize she is central to a war that could burn this Appalachian town right down to the bones.

And then the lights went out, the grid failed, and everything changed....

Will an EMP strike on a failed economy prove lethal to a besieged nation? Or will its citizens rally to protect their homesteads and safeguard their families? Find out in this small-town post-apocalyptic survival thriller full of great characters, apocalyptic ambiance, a few well-timed laughs, and some poignant moments.

The Burning Hollow is USA Today best-selling author and master storyteller Ryan Schow at his finest. So grab your copy of the book, find a quiet place to listen to it, and settle in for a story like no other…

This five-book post-apocalyptic survival series has no coarse language, explicit sex scenes, plagues, or zombies, but does contain some mild violence similar to that of a PG-13 action and adventure film. Perfect for fans of A.G. Riddle, Kyla Stone, Franklin Horton, Jack Hunt, Boyd Craven, and Bobby Akart. Suitable for ages 13 and up.

Adolf von Württemberg
5.0 out of 5 stars Back home in the "holler"
Reviewed in the United States 🇺🇸 on January 2, 2023
Verified Purchase
Book Review:
“The Burning Hollow Book One” by Ryan Schow
Ryan Schow did some excellent research to portray East Tennessee where I lived for >20 years. When he mentioned cities such as Knoxville and Cleveland, I felt right at home. He must have some gardening experience too because he mentioned my favorite tomato, the native American Cherokee Purple. Every summer I look forward to my first tomato and mayo sandwich.
There are good descriptions of the impact of the drug trade and how it affects very small communities such as we have there. Small rural communities have not escaped the attention of the drug dealers.
Highly recommended for fans of dystopian post-collapse novels! I have already begun to read Book Two in the five-book series.
Read more
2 people found this helpful
Helpful
Report abuse

debbylyn
5.0 out of 5 stars Forget about sleep till your done!
Reviewed in the United States 🇺🇸 on January 20, 2023
Verified Purchase
I put this series off thinking it might be a bit tame after Atlas Hargrove. Don't! Ryan Schow has yet to disappoint. Well almost when I thought the dog died but thankfully it did not. Current affairs mixed with family drama make this Fast moving and believable. As always you can tell Schow is smart, funny and willing to put in the work.
Read more
Helpful
Report abuse

Dennis Ross
5.0 out of 5 stars Hometowns are always home
Reviewed in the United States 🇺🇸 on January 19, 2023
Verified Purchase
Sometimes it's hard to go back home, some of us are lucky to have a place that doesn't believe in progress, it likes things the way they are, but will the world let it stay that way? Not with America under attack I'm afraid.
Read more
Helpful
Report abuse

Robert P. Rockhill
5.0 out of 5 stars Fast paced , exciting read
Reviewed in the United States 🇺🇸 on January 29, 2023
Verified Purchase
I have really enjoyed this book. I love this genre and this book never gets slow or boring. The characters are interesting and well developed. Give it a try
Read more
Helpful
Report abuse

Mrs Dustbunny
5.0 out of 5 stars Grittier
Reviewed in the United States 🇺🇸 on January 23, 2023
Verified Purchase
This story is a grittier, more intensely personal version in the posts apocalyptic genre; and I'm there for it! Realistically complicated characters, consequences and situations.
I'm ready for the next book, can't wait!
Read more
Helpful
Report abuse

tocsnai
5.0 out of 5 stars Hooked on his books since Dark Days Series!
Reviewed in the United States 🇺🇸 on January 13, 2023
Verified Purchase
His books are full of suspense. I find that I’m sleeping less as I can’t put his books down! I want the stories to go on and on so I love that he writes series of books.
This book does not disappoint! Can’t wait to get into book 2.
Read more
2 people found this helpful
Helpful
Report abuse

Lady Tara 8
5.0 out of 5 stars REALISTIC
Reviewed in the United States 🇺🇸 on January 10, 2023
Verified Purchase
It's almost too real. Economic collapse, drug being pushed into small towns, family conflict corrupt government officials and the struggle to be the power in a small town. Then the EMP happens, we are invaded but by whom? I had to slow down my reading because I didn't want the book to end. I'm now into Book 2 and it is even more intense.
Read more
One person found this helpful
Helpful
Report abuse

jonathan nichols
5.0 out of 5 stars This book is Amazing, Riveting and Scary as hell as it lines up with America’s present Conditions
Reviewed in the United States 🇺🇸 on January 22, 2023
Verified Purchase
The characters are endearing. I can’t put this book down. I am eager to start book two.
Read more
Helpful
Report abuse
See all reviews

Me
1.0 out of 5 stars Slow.
Reviewed in the United Kingdom 🇬🇧 on December 28, 2022
Verified Purchase
This book took a very long time to get absolutely nowhere. Very rare for me but I couldn't finish it and will not buy any more in the series.
Read more
Report abuse
See all reviews