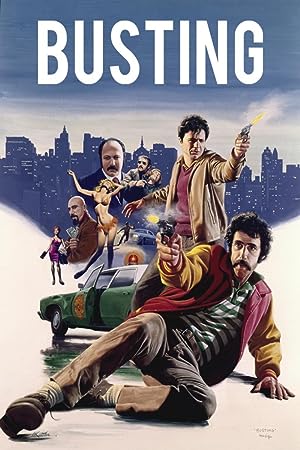 (92)
6.31 h 31 min1974R
Two vice officers use unorthodox ways to go after an LA crime kingpin and the crooked cops in the department who support him.

Watch with ScreenPix
Start your 7-day free trial
Add to
Watchlist
Redeem a gift card or promotion code
By ordering or viewing, you agree to our Terms. Sold by Amazon.com Services LLC.
Write review

Allen Garfield's #1 fan.Reviewed in the United States on August 2, 2018
4.0 out of 5 stars
Great proto cop/buddy movie
Verified purchase
Great 70s sleaze. This un-PC movie is a close cousin to Freebie and the Bean.

When vice detectives Mike Keneely (Elliot Gould, MASH) and Patrick Ferrel (Robert Blake, IN COLD BLOOD) bust prostitute Jackie (the sexy Cornelia Sharpe, SERPICO, VENOM), they are frustrated to find their case fall apart in court due to insufficient evidence (Jackie’s “trick book” has mysteriously disappeared from evidence), and they suspect that bigwig Rizzo (The always great Allen Garfield) has put in some calls. They get even more suspicious when their sergeant Kenefick (John Lawrence, THEY LIVE) repeatedly assigns them to low-level pervert patrol; however, Keneely and Ferrel continue to bust establishments connected to Rizzo, including an adult bookstore run by Marvin (Michael Lerner, THE CANDIDATE, MANIAC COP 2) that caters to massages (and more) courtesy of Doris (Erin O’Reilly, THE BABY). Keneely sees track marks on the girl’s arms and suspects that Marvin – who threatens them with calling Rizzo – is supplying her with heroin. Suspecting that Marvin can link Rizzo to the heroin trade, they try to get a warrant to search Marvin’s apartment, but the desk sergeant (Richard X. Slattery, WALKING TALL) refuses to wake up the judge at one in the morning based on a hunch. Keneely and Ferrel then decide to conduct an illegal search and stumble upon a drug deal, which leads to a shootout in the iconic farmer’s market. They manage to take out two of the dealers, but the main one (Frank Farmer, CAPRICORN ONE) gets away. Kenefick, once again claiming to be caught in between them and the captain, assigns Keneely and Ferrel to watching a park bathroom; however, when they are off duty, Keneely and Ferrel decide to make nuisances of themselves with Rizzo since they suspect that they interrupted a drug deal and that he will need to make another score quickly to cover his losses. They show up at Rizzo’s church, at a restaurant during lunch with his family, at the yacht club, and cap the evening off by setting his car on fire during his birthday party. Rizzo retaliates by having both men savagely beaten by Stephen (Antonio Fargas, FOXY BROWN, TV's Huggy Bear). Kenefick is pressured into splitting them up and assigning them new partners; however, this just makes the pair even more eager to bust Rizzo.

BUSTING was writer/director Peter Hyams’ first theatrical feature – a Syracuse University music major turned CBS anchorman – although he had previously written Herbert Ross’ T.R. BASKIN and directed the TV movies ROLLING MAN and GOODNIGHTY, MY LOVE [which he also wrote]. Script-wise, there’s an obvious DIRTY HARRY influence, although Gould’s Keneely is more reckless than badass and the banter between Keneely and Farrel is more obnoxious than amusing; however, Garfield’s Rizzo is cocky enough for the audience to side with the two heroes in taking him down. The ending should be more cynical, but Gould is only given one monologue to express his waning pride in being a policeman, and Blake is given even less to work with. While Fargas gets an effective scene pummeling Gould, Sid Haig (Rob Zombie/Roger Corman/QT regular) as Rizzo’s bouncer isn’t afforded the material or the screen time he would get in, say, an AIP offering. Danny Goldman – who appeared in both MASH and an episode of Blake’s show BARETTA – appears briefly as a public defender, while character actors like Slattery, William Sylvester (as Rizzo’s lawyer), and Logan Ramsey (as a wh*re-frequenting dentist - one of the raunchiest in filmdom) are given little to do. BUSTING was the fourteenth collaboration between producers Robert Chartoff and Irwin Winkler, which started 1967’s POINT BLANK and later encompassed RAGING BULL, the ROCKY series, Scorcese’s NEW YORK, NEW YORK, Ken Russell’s VALENTINO, Philip Kaufmann’s THE RIGHT STUFF, and the 2011 remake of the Charles Bronson film THE MECHANIC.

Although TV cameraman Earl Rath (GARGOYLES, GO ASK ALICE) is credited with the film’s cinematography, I would reckon that Hyams had the greater influence on the film’s look, as the film has the grainy, natural light look of many his subsequent films (Hyams has also served as director of photography on several of his subsequent directorial efforts starting with 2010 [1984]). Practical lights from desk lamps to fluorescent tubes bloom, usually as backlight with even lower levels of fill lighting just illuminating characters. It’s a interesting look, but it starts to get quite monotonous here, with little contrast between the moody interiors – police station interiors are improbably lit for chiaroscuro effect, and even the courtroom where the vice arraignments take place has a Rembrandt-lighting thing going on with it – while pitch-black night and dreary daytime exteriors. Whereas William Friedkin favored blue gels for his gay club in CRUISING, Hyams baths his campier club in hellish red gels, and utilizes strobe lighting during a strip act in Rizzo’s Club Electra (now The Viper Room), and these bits stand out from the rest of the film visually. Hyams keeps the camera moving, and favors long takes over quick cuts, which heightens the suspense of the farmer’s market shootout as it required the carefully-timed choreography of the actors and several extras, and the camera would more often find the hiding places of the shooters rather than cutting away to them popping out from around corners.

Kino's Blu-ray has gone the extra mile with two commentary tracks. Director Hyams has not seen the film since it was released as he prefers not to look at his films again once they are past the point where he can still improve on them. He describes the laborious research he did with cops, pimps, and hookers and his attempt to make the film play and look different than any other cop films of the time. He points out events that have basis in reality, including the sources of some of Gould's and Blake's ad-libs, trying to balance light sources and the difficulty of lighting cramped interiors, shooting the action scenes pre-Steadicam with dolly tracks visible during the market chase, as well as working with Gould and Blake. He also describes the betrayal he felt when he submitted the gay bar scene ( featuring a member of Steppenwolf!) to the Gay Actors' Alliance for their blessing only to have them then speak out against it after the film was released even though they approved it and many of their members participated in it as extras. He concedes to some of the mistakes he made, like taking the time to set up elegantly-choreographed shots of "shoe leather" (characters entering or exiting locations) that he insisted would make it into the film but ended up being the first to go, but is generally satisfied with his work as a screenwriter, cinematographer, and director here.

The second track is actually a selected scenes commentary (46:18) with actor Gould and critic Kim Morgan over some of the film's key sequences including the opening bust, the courtroom sequence (shot in the same location as the Manson trial), the market shootout, and so on. Gould reveals that Blake was not the first choice for his partner, and that he had voiced his doubts about original choice Ron Leibman (SLAUGHTERHOUSE-FIVE) only to learn that the producers also had in mind Blake and Peter Boyle (TAXI DRIVER). He discusses working with Hyams who threatened to throw acid in his eyes if he messed up his film (they would work together again in CAPRICORN ONE) and Blake (who had a hard time keeping up with Gould in the chase scenes because of his shorter legs), as well as Sharpe (who married SCARFACE producer Martin Bregman) and producers Chartoff and Winkler. Morgan points out the parallels of the film with Blake's earlier ELECTRA GLIDE IN BLUE and Hyam's later RUNNING SCARED, as well as BUSTING's newfound cult audience, and is amazed at how many scenes perfectionist Hyams did only single takes.

Georgia Six-StringReviewed in the United States on April 18, 2019
3.0 out of 5 stars
Robert Blake, pre-Baretta
Verified purchase
Elliott Gould is the star of this movie, but I bought it as a longtime fan of Baretta and the work of Robert Blake. It's an entertaining movie -- although one certainly of its time -- and an intriguing precursor to Baretta. There are a couple of scenes where the Blake character, a detective named Farrell, exhibits that cold steel, in-your-face resolve that was later central to the Tony Baretta character. That said, the plot line of the film is often slow, tedious and frustrating. Reportedly, director Peter Hyams did a tremendous amount of research for the film, and said that every scene was true to what he learned about the life of a vice cop. Perhaps, but truth is not necessarily entertaining. The film could have benefitted from some compression, enabling it to move more quickly through its slowest moments. Still, recommended for Baretta fans, at least, and Elliott Gould fans as well.
One person found this helpful

joel wingReviewed in the United States on March 7, 2022
3.0 out of 5 stars
2 vice cops get way in over their head
Verified purchase
Busting is a buddy cop film featuring Elliott Gould and Robert Blake as vice police who get way in over their head. I like how they built up the story with Gould and Blake busting your average run of the mill hookers and next thing you know they’re both beat up and their lives are threatened because they stepped on someone’s toes. The film is also made realistic and gritty, which came into its own in 1970s Hollywood. The ending as well is very 70s. They just don’t make movies like this anymore.

Vince M. BarronReviewed in the United States on May 10, 2019
4.0 out of 5 stars
A must for Peter Hyams Fans
Verified purchase
I am a big fan of Peter Hyams. I didn't know that this was one of his early films. While the characters are not developed well, it is still a great cast of actors to watch. The plot could have been more developed, but the camera angles and the approach to the story is well done. Great job for a first-time, low-budget feature. Peter Hyams is an unsung hero of the cinema. He is one of the few directors who has a diverse history of films under his belt -- and they are all very entertaining!

Movies Are CinemaReviewed in the United States on January 14, 2022
3.0 out of 5 stars
Wish I could rate this higher, but too much gratuitous sex.
Verified purchase
I like this film with the pairing of Elliott Gould and Robert Blake. Some tough stuff, some comedic efforts, but mainly interesting as a lesser known 1970's flick.

Jessica M.Reviewed in the United States on December 5, 2018
5.0 out of 5 stars
Good movie!
Verified purchase
If you like old movies you'll love this one!
One person found this helpful

C6Reviewed in the United States on March 2, 2016
4.0 out of 5 stars
THE MUSIC
Verified purchase
Good story. Not over the top other than the personalities going overboard as you might expect to keep your interest if you start to waver. Print and color not bad. I also enjoyed the soundtrack.
See all reviews
Back to top
Get to Know Us
Make Money with Us
Amazon Payment Products
Let Us Help You
EnglishChoose a language for shopping. United StatesChoose a country/region for shopping.
© 1996-2022, Amazon.com, Inc. or its affiliates