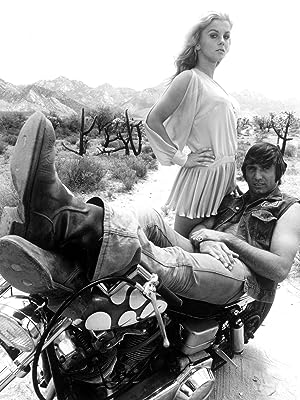 (278)
4.81 h 35 min1970R
Broadway Joe in his first starring role as a motorcyclist who first joins a motorcycle gang, but tangles with the biker gang while trying (not very hard) to fight off Ann-Margret's advances. He wins a motorcross event and they kidnap her. He races the leader to win her freedom.

Ignorant BumReviewed in the United States on March 17, 2020
2.0 out of 5 stars
Cool movie, bad DVD
Verified purchase
I hate to give this a bad review, because I really like the movie. Cool, fun biker movie with Joe Namath, Ann Margaret and the great William Smith. But this version by Cheezy Productions is bad. The video transfer looks terrible, and the movie itself has been edited much more than a made-for-network-tv version. Some scenes are edited so much it's hard to follow what's happening.

I enjoyed seeing the movie again after all these years, but this Cheezy Productions version leaves a lot to be desired.

WuchakReviewed in the United States on February 22, 2015
3.0 out of 5 stars
Fun Biker flick with Namath and Ann-Margret
Verified purchase
Released in 1970, "C.C. & Company" is a low-budget biker flick starring none other than Joe Namath as C.C. Ryder, a quasi-member of The Heads motorcycle gang. When C.C. hooks up with a pretty fashion designer, played by Ann Margret, it causes friction with the other gang members, particularly Moon, played by William Smith. It all comes down to C.C. and Moon squaring off in a bike race at a high school football field track.

This is a fun biker flick and not as dead serious as 1966's "The Wild Angels" – the first and best biker flick – or 1969's popular "Easy Rider," which was just as good in its own way. "C.C. & Company" also seems to have a lower budget. For instance, there's some noticeably bad acting by Smith and Teda Bracci, the latter who plays biker chick Pig, but – then again – maybe they were intentionally shooting for camp (ya think!). The obvious draw here is Namath's larger-than-life charisma and cutie Margret; it's inexplicable that Namath didn't develop a lasting acting career (maybe that infamous pantyhose commercial did him in, lol). The rockin' late 60's soundtrack is also a treat. The whole cast obviously had fun making the film and it comes off on the screen.

Besides Margret, the movie features a couple other standout women, like Jennifer Billingsley as Pom Pom and Jacquie Rohr as Zit Zit. Billingsley is rather tall with model-like beauty, albeit hidden behind her wild biker chick garb, while Rohr is petite and curvy. The latter could've easily stolen the show if she had more screen time.

While worthwhile just for the two stars and amusing as light biker fare, "C.C. & Company" is unable to overcome its limitations, which explains my mediocre rating. Nevertheless, if you appreciate the biker genre that ran from 1966-1974 "C.C. & Company" is mandatory viewing, sort of.

The film runs 83 minutes and was shot in Tucson, Arizona, and Las Vegas.

Dan PotterReviewed in the United States on August 31, 2017
4.0 out of 5 stars
way to go broadway joe
Verified purchase
after 2 straight weeks of hell, we got permission to leave the company area. i was in basic training ft. lewis washington. mid july this was the first flick my buddies and i went and saw. being young men that night ms ann margret was lusted over. mr namath was our object of jealousy. we all had a fun time. i had forgotten much of this film as i am not too sure i have seen it since then but i did remember the large bikes looking foolish on the dirt track. thanks amazon for the memories.
6 people found this helpful

Robert I. HedgesReviewed in the United States on October 8, 2010
3.0 out of 5 stars
Broadway Joe Namath, Unintentional Outlaw Hilarity, And The Grossest Sandwich Ever
Verified purchase
"C. C. and Company" is a film that could only have existed in 1970. Coming off his victory in Super Bowl III in 1969, Namath could do pretty much anything he wanted to, and one of the things he wanted to do was act. I'm normally not much on professional athletes turned actors (although Rosey Grier starring opposite Ray Milland in "The Thing With Two Heads" is an all-time B-movie great,) Namath acquits himself adequately as the unfortunately named C. C. Ryder, the good biker in "The Heads," the rotten to the core gang he finds himself in. The film opens with Namath foraging in a supermarket and making himself a sandwich on the baby seat of a shopping cart. While he was eating the sandwich all I could think of was the recent news report I had read that discussed how that area is the most germ-laden area of a cart due to baby diaper contact.

After downing the sandwich the very mod split-screen credits open up while a generic version of "C. C. Rider" blares in the background (the version by Elvis would have been really welcome at this point; so would the version by Peggy Lee for that matter...) and we quickly find that Namath is the one good guy in the gang when he comes to the aid of beautiful Ann-Margret, whose limo is stranded in the desert, saving her from the ravages of two other bikers, and getting into a feud with the leader of the pack, Moon (William Smith, who turns in a good and genuinely deranged performance) in defense of her honor.

The Heads are a bunch of miscreants with names like Rabbit, Lizard, Pig, Pom Pom, and Zit-Zit, and the backstory explaining Namath's presence in the gang is less than convincing. You know they are real bad characters right off the bat because the first thing they do is enter a motocross race. Settle in, because there's lots of motocross action throughout the remainder of the film, and you will be surprised how boring that can be. Ann-Margret shows up at the race (of course) because there is a cross-promotional contract between a fashion designer and a motorcycle race promoter. (That makes perfect sense.) The simply idiotic love story that follows is only one ridiculous element of the vapid plot structure of this film, but enjoy the cheese factor (the DVD was released by Cheezy Flicks, after all.) To impress Ann-Margret, Namath enters the race and makes quite the impression by taking third place by carrying his bike across the finish line, thus cementing "C. C. and Company" in permanent first place in the lame biker movie awards.

Moon becomes jealous of C. C.'s newfound fame and desire to retain some of the funds he has earned (Moon runs "The Heads" as a commune with himself as head Head and treasurer.) This split in the group leads to fisticuffs that go on for quite a while and end pretty much in a draw. C. C. leaves the group, heads over to Ann-Margret's place, picks her up and goes dancing in the official start to one of the most putrescent on-screen romances in history. The musical romance montage is particularly unbearable. Still jealous, The Heads invade Ann-Margret's house, kidnapping her for a ransom of $2,000. It's really more of a bet, because the resolution involves them breaking into a stadium at night for Moon and C. C. to race. Moon meets a hilariously over-the-top demise, while C. C. rescues Ann-Margret, and they escape in a big nighttime motorcycle chase. If you found the endless motorcycle scenes boring in daylight, just wait until you see the lack of excitement that prevails when all you can see are streams of headlights for minutes on end. It's simply interminable. The film closes with Namath and Ann-Margret outfoxing The Heads and cleverly destroying their bikes (which is a genuinely amusing, if unbelievable scene.) They decide to go on the road together, and the two ride off into a future of certain bliss.

The film suffers from several technical problems that are apparent throughout, one of which is that this print is quite dark and grainy, but the most annoying of which is easily the incidental music which is omnipresent and is xylophone, slide whistle, and trumpet intensive. Don't miss the credits, which explain that the film was made largely in Tucson, but that the dancing part was filmed in the "Fabulous Flamingo Hotel" in Las Vegas. That particular credit may be a bit adjectivally-challenged in the accuracy part in the opinion of some: certainly "fabulous" would not have been a word I used to describe that particular hotel, but to each his own. Please also enjoy the "Intermission" extra, which I found wonderfully appropriate for a film of this vintage.

"C. C. and Company" is entertaining as a B-movie relic of the early 1970's, and although utterly implausible, predictable, and heavy-handed, it's still worth a look for lovers of camp, motorcycles, or football.
6 people found this helpful

Dennis HuskinsReviewed in the United States on March 19, 2010
1.0 out of 5 stars
The Cut version
Verified purchase
I remember this old drive in flick because Joe Namath was a favorite football player of mine combined with Ann Margarett so I had to see it. It was never a great film to begin with but this version I recieved seemed dark in contrast and edited for TV or something. In fact it was cut so bad that the film barely made sense, and it was a very weak story to begin with. Once Joe tells his gang buddies "You don't hit something as pretty as that." When we never see them hit anyone??? I only got this film to collect some of the films of my youth but watching it now as a grown up makes me laugh at how easily impressed we were as youngsters. This is a "Cheezy" film with a capitol C. Top it off that when the CD arrived it was rattling inside the case and it was scartched all over, but somehow it still played without a problem. No more than i'll be watching it I decided not to send it back.
5 people found this helpful

Kay G. AbernethyReviewed in the United States on October 2, 2020
5.0 out of 5 stars
Cool and Corny Movie both!
Verified purchase
This movie is a corny story line but I love watching it because I love Ann Margaret and I especially loved Joe Namath back in the day. He was very easy on the eyes back then. Worth buying the movie just to see him when he was such a hunk! lol...

joe collinsReviewed in the United States on July 12, 2020
5.0 out of 5 stars
Joe Namath as a biker
Verified purchase
This is a classic film starring joe Namath as a biker loner as well as Ann Margaret! Great comedy from a non-traditional actor! It may be from 1970 but if you love biker films in the tradition of Every Which Way but Loose then give it a watch!