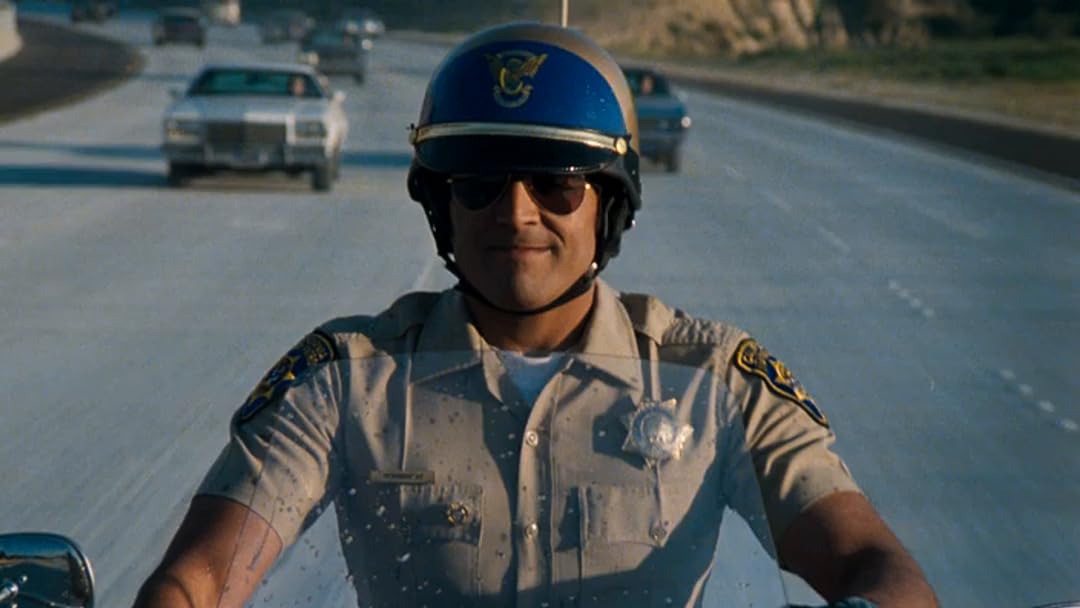 (1,051)
6.41978X-RayALL
Follow the adventures of two California Highway Patrolmen--CHiPs--as they motorcycle down the highways aiding motorists and apprehending dangerous drivers.

Ray's game gabReviewed in the United States on August 5, 2018
5.0 out of 5 stars
Oh how I miss the 70's
Verified purchase
If your going to get any season of Chip's you gotta get this one. Ponch and John are so young in this season and they seemed to really enjoy working together. The stories are are very entertaining from start to finish and have that great 70's feel. I grew up watching these on Saturday night's as a kid in the 70's. Now that I am older I really appreciate this time and the nostalgia. Watching this show will take you back to this time and just make you feel happy. Some of the episodes have an intro by Erik Estrada in which he gives some cool insight on the episode. They don't make shows this good anymore.
8 people found this helpful

Paul JutrasReviewed in the United States on July 12, 2015
4.0 out of 5 stars
yes it has extras
Verified purchase
This has always been one of my favorite police shows. It great that out of the three seasons out that this one has bonus features who Ponch talks about a handful of episodes. While this season takes you back to where it all started it has the same problem all three season sets has. The Audio. For some reason Doby Digital DVDs seem to have much the same audio problems as Mono sound quality DVD movies when played on HD TV speakers. Season 1 I can hear good at my normal volume level those with hearing problems will have difficultly. Though not as much problem in season 1 set as season 2 has. where I Max out the volume to the highest level to hear normal conversations then force to lower the volume during the chase scenes where the back ground theme song start blasting.
3 people found this helpful

Dr. John.Reviewed in the United States on May 16, 2007
4.0 out of 5 stars
Fun and lots of big Kawis.
Verified purchase
This show came out my first year of college. We'll get to that in just a sec. I just love big Kawis. The KZ 1000 police original B and C series bikes sounded so good. The Z type engine always got my attention with that cool sound from the straight cut spur gear on the crank that drives the transmission. Ok, tmi ha ha. I ran out and bought one as soon as used police bikes were available. Mine had only 30,000 on it and I rode that bike all over the LA area, even to the LA central CHP office where the show was filmed. Just visiting, no fix it cite. After all, I grew up in So. Cal. I've owned several KZ 1100s. "A" series, LTDs, etc. My neighbour owns an original '73 and '74 900 Z1R. The newer Bimmer R1150 RT0P is a great bike also, it's the police bike of the next generation after Kawasaki stopped building the KZ1000 P series. A faithful soldier that will be fondly remembered.

Oh yeah, on to the show. The characters work well, plots are fun and cinematography is tremendous! Cheers to John and Ponch. (Larry Wilcox, Erik Estrada) Great chemistry between the leads and Robert Pine, who played Sgt. Joe Getrare. The character reminds me of guys I've worked for in the past. Good sense of humor, down to business, and likable. My only problem with the series is that it got sillier as the seasons progressed and the disco music and beat get a little old after a while. It progressively got schmaltzy and the writing could have used some freshing up but it's still fun, great escapist TV. The pilot is the one of my favourite shows of the series. You really get to know and like the characters right off. Finally, it's on DVD, albeit first season. Looking forward to the subsequent seasons and a copy of the movie "CHiPS '99" which I have on VHS. That's also fun. Good writing, action, and lots of Kawasakis. If you love big bikes, lots of guy stuff, and pretty ladies with nice smiles, don't miss this one. Cudos to Rick Rosner. Nice shooting. This show still has wheels. Meanwhile, if you're a Chippie riding a Bimmer and a guy on a Blue BMW K 1200 GT waves, that's me. Happy riding and thanks for keeping us safe. Enjoy the show, it's worth every minute.

MusculrReviewed in the United States on October 3, 2007
5.0 out of 5 stars
Hours upon hours of Ponch and Jon? What's better than that?
Verified purchase
I was born in 1961, so I'm at the tail-end of the "boomers." But being an avid motorcyclist since the late 1970's, this trip down memory lane watching Ponch and Jon do their thing as CHP motor officers is reminiscent of the days when I watched "Emergency!" on TV. Why is that significant? Well, I've been in the Fire Service as a Paramedic and Lieutenant for 18 years now. But my 'medic years extend even beyond that. CHiPs was on the air towards the end of "Emergency!" and although I didn't choose a law enforcement career, I did work as a police officer for a short time back then. The main thing I love about CHiPs is of course, the memories but those bikes rock. I remember drooling over those big Liter Bikes (1,000cc) back in the day. In fact, if I could get ahold of one now, I'd grab it up in a heartbeat.

Some folks find CHiPs a little hokey, and I understand why; if you didn't grow up a child of the 70's that's a normal feeling. Since I am most definately part of that group, I love CHiPs and watch these episodes often.

If you're like me and you want to refresh some vivid late 70's memories, get yourself a copy of these DVD's. I only hope that the powers that be will recognize a good thing and put Season 2-6 on DVD as well. I'd get them all. Then, when the Grandkids are older, I'll show them a slice of the 70's; and we'll all get a good laugh at Papa's passion.

MicahReviewed in the United States on June 20, 2007
5.0 out of 5 stars
Why can't TV shows STILL be this great!
Verified purchase
Wow, so I finally hear Chips was coming out on DVD and I thought to myself it's about time! I bought my season one and got it in the mail and let's just say VERY HAPPY!

1. The Box set.. 4 slim slipcases each include 2 disks. The holders are very well made, they keep the discs in place and nice and secure, but at the same time they are very easy to pop out, unlike some other DVD sets I have purchased in the past. I would have liked to maybe have had more liner notes about the series included, which their are very little included. All and all though I'm very pleased with the box set itself.

2. Whats on the discs? Well all time classic TV thats what. :) I sat down and watched the first episode that started it all. Whats amazing to me is that after all these years since I last seen Chips on TV when I was much younger (I'm 35 now) many of the scenes in the first episode came back to me just like BAM! The scene in which Ponches bike gets stuck in the glue lol I remember that like it was yesterday! So fun to watch and I must say, they just don't make TV this good anymore in the 2007 times. Yes there are some good shows here and there, but you always have to worry about some foul language, or some offencive scene involved. Here with Chips you have just good clean fun comedy, with a positive messege for kids today and adults as well. If you want to watch some classic TV that you will enjoy years later, as well as TV that you can have your kids enjoy for years to come. Get CHIPS! I can't wait for the other seasons.

ZackReviewed in the United States on January 21, 2021
1.0 out of 5 stars
The disc is missing a copy of the show so some don't play
Verified purchase
I just got mine in the mail and the third one dosen't even work it's called Dog Gone it's on disc 1 it's episode 3 I tried it on my DVD player tried it on my xbox one s I tried it on my xbox 360 still nothing it just goes to a big black screen and nothing pops up. My guess would be they didn't copy these episodes very well on to a disc because I use to have this along time ago and never had a issue of course I paid $56 for that one back then but still I'm not paying for something that doesn't work especially when I waited a month to get this in the mail I'm getting a refund because that should not of had a issue it had a plastic cover over the casing so it wasn't used at least not to what it said on Amazon .

Christopher KrugReviewed in the United States on February 23, 2008
4.0 out of 5 stars
Chips-A Must Have!
Verified purchase
Are you a fan of 70's TV? If so,this DVD set is a must have,with stars such as Erik Estrada,Robert Pine & Larry Wilcox,Chips is a must have DVD set.All 22 episodes of the entire First Season from this Hit of the 70's are herein.There are even facts from Erik Estrada himself on select episodes....i was somewhat disappointed that there are not more features...there are no interviews of how chips came about,nothing from the filming,nothing from anyone but Erik Estrada.Do not get me wrong.This set has all the comedy and drama that i used to watch as a child with the Police Officers i grew up with and loved to watch.It is hard to believe however that this first season set did not have any behind the scene features.Only had facts from Estrada....but the bottom line is this set is a must have for any 70's TV fan...the money is certainly worth it to relive the days of yesteryear with our favorite CHP officers.
I can only hope that Season 2 has more features to share with the fans of this wonderful show from the all the stars we grew up with.
4 people found this helpful

EntertainedReviewed in the United States on December 14, 2019
4.0 out of 5 stars
Bikers with a Badge.
Verified purchase
Fun to remember shows of the past. This one is no exception. Ponch and John go after bad guys, but have fun on and off the job. Riding their patrol bikes along highways and streets to keep criminals from running rampant and helping those in distress.
See all reviews
Back to top
Get to Know Us
Make Money with Us
Amazon Payment Products
Let Us Help You
EnglishChoose a language for shopping. United StatesChoose a country/region for shopping.
© 1996-2022, Amazon.com, Inc. or its affiliates